While many from the current generation seek some kind of inexplicable pleasure from destruction, here comes the protagonist of Demolition Girl, a high-school kid who’s shown to be crunching some cans and plastic bottles under her feet. This is the very first frame that we see and pretty much the entirety from the film’s teaser. Not long after that, we get to know about this being a part of some sexual fetish video that her friend is getting good bucks for.

The initial conversation that we get to hear describes her dreams and wanting to fulfill them by trying to earn at least something through some jobs such as this. She isn’t particularly happy about doing it and it doesn’t look like her choice to provide this act as some sort of entertainment for others. Her melancholic eyes give away most of this, even when she smiles for a brief moment. The whole film is about her resilience and about the portrayal of almost everyone who is struggling to survive like her.

Directed by Genta Matsugami, ‘Demolition Girl’ is a story of 17-year old Cocoa (Aya Kitai), who has to live with her unproductive father and brother who’re afraid to face the world on their own. For the same reason, she has to work even after being a student. Both of her housemates are merely parasitic nobodies, who she has to feed for being the only person earning at the time. In the wake of her mother’s death, she has aspirations of going to a university to learn and grow like a normal high-schooler. She also seems quite determined about this. But being in a working-class family in such conditions, she hardly gets a breath of fresh air, let alone a moment where she can depend on someone.

While we grow resenting her non-helpful guardians, we see the wishful smile on her face whenever she’s with her classmates or chatting with others at her workplace or even while she’s working for that fetish video with Kazuo (Hiroki Ino), the aforementioned friend. From them, she at least gets a sense of connection and warmth, despite her harsh reality. The consequences of her actions of the soulless acts by her gambling addict-father, lead her into even more misery. 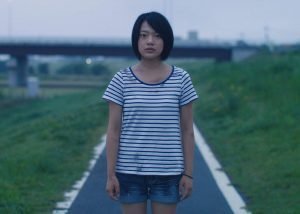 Aya Kitai, who’s especially remarkable in her role, has a complete realization of the silent rage of her character. Her eyes take us through her tumultuous journey even in some of the transitory moments, which are there solely to express the state of her mind. One scene that I clearly remember is where she’s trying to crush an earthworm almost like the cans or balloons from those videos. We see the shots of her face and of the worm struggling under her shoes. She’s wrestling with herself and her conscience, whether to keep surviving and resisting like that little creature or to give up at any given moment. At the time, she sees herself as this creature. That’s the strength of precise storytelling matched up with impactful performance.

The film’s strength lies upon its emotional quotient and how it handles her continuous downfall despite the character’s never-ending perseverance. Each of the characters serves for the central narrative and help in fleshing out her character even more. The class-differences and the ease of available options are highlighted which take this subjective narrative to a universal level. And despite all the circumstances, she hardly ever resorts to being in denial and tries to linger on the tiniest bit of hope. That’s what keeps the warmth intact. The alienation of her character as a result of that appears to be something, which we’ve already seen in recent years. But it hardly matters when all the aspects serve in bringing it out as a coherent narrative.

‘Demolition Girl’ certainly becomes an impactful and a deeply moving coming-of-age drama that demands a viewing solely for its central performance.