In The Endless  Trench (‘La trinchera infinita’, 2019), the burden and pain of four decade fascist dictatorship on Spain is examined through a extraordinary and terrifying experiences  of a man, who spent decades hiding inside his family home. When the Spanish Civil War broke out in July 1936, the left-leaning Republicans were mercilessly hunted down by the primarily conservative Nationalists, led by General Francisco Franco. It’s a conflict that pitted neighbor against neighbor, and the victors were vicious and swift in wiping out their leftist opponents. Many Republicans, fearing persecution, fled their villages and towns and joined guerilla forces. But few decided to wait in their home, hiding behind the false walls or dug little tunnels beneath the floor.

Unfortunately, Franco’s grip on Spain strengthened post-World War II, and until the time amnesty was granted in April 1969, hundreds of Republicans were confined to their homes (Spain remained a dictatorship until Franco’s death in November 1975). Nicknamed ‘moles’, the painful ordeal of these ghostly survivors, who even watched their own kids grow from behind a keyhole, is hard to fathom (one man named Protasio Montalvo came out of his hiding place only in 1977, long after the amnesty was announced, since he feared retaliation from his neighbors). The ‘moles’ set foot in a very changed world. Although the visible barriers erected by the Francoist Spain had long crumbled, the men would have never overcome the mental/emotional block created by the decades of excruciating solitude. 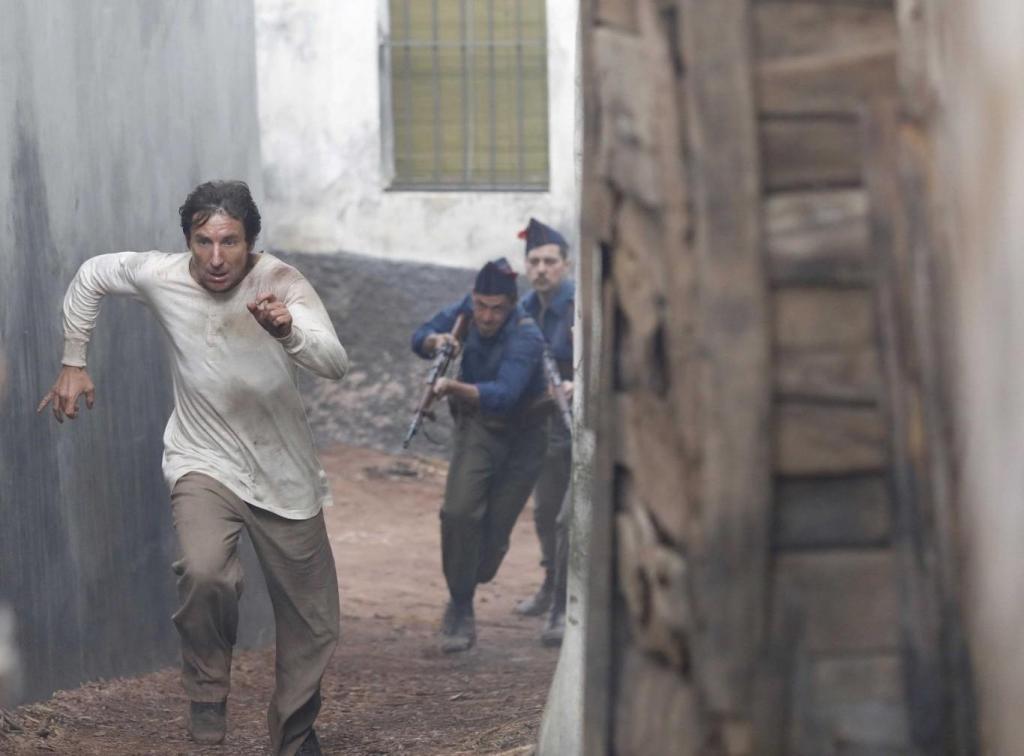 The trio of Basque filmmakers, Aitor Arregi, Jon Garano and Jose Mari Geonaga though offers a fictional retelling have drawn a lot from the true stories of survivors. The trio previously made the brilliant, heartfelt drama, Loreak (‘Flowers’, 2016). The film-makers were deft in handling the stifled emotions, which is evident in the manner they subtly showcase the central character’s isolation and yearning for freedom. Written by Geonago and Louis Bendega, the historical drama opens in a village in Andalusia, where the Republican Higinio Blanco (the phenomenal Antonio de la Torre) takes flight from his home to dodge the fascists. A very immersive and nerve-wracking hunt ensues as Higinio flees through the narrow streets with an intention to reach the nearby mountains. There’s an early claustrophobic scene, set inside a well, that deeply makes us feel the sense of entrapment, fear, and despair as felt by Higinio.

Related to The Endless Trench – The Wind [2019] Review: A Menacing Portrait of Isolation

When the plan to make it to mountains with fellow fighters is foundered, Higinio covertly returns back home, and his affectionate young wife, Rosa (a much nuanced Belen Cuesta) hides him beneath a small hole in the floor of their living room. The fascist soldiers, directed by their neighbor Gonzalo (Vicente Vergara), keeps tormenting Rosa to learn about her husband’s whereabouts. Gonzalo is fixated on capturing his Republican neighbor, since he blames Higinio for the death of his brother. The writers leaves Higinio’s past actions (as a former town councilor) ambiguous which adds more shades to the character. Rosa and Higinio are newly married couples. So though their plans to go on an honeymoon trip to the coastal regions is thwarted by the onslaught of civil war, the passion of young love keeps them connected (glimpsed in the beautifully staged sex scene).

But as the years stretch on, the pragmatic aspects of dealing with the confinement takes a toll on both of them. In a way, Rosa shares Higinio’s incarceration and the unspoken tensions that exist between them is subtly evoked through the complex imagery. At one point, they move into a different home, and Higinio takes refuge behind a false wall near the fireplace. A tailor by profession, Higinio, cooped up in the cubbyhole, helps Rosa with her work. When a customer or someone else visits Rosa he stares at her through the wall. A curtain moved due to wind keeps him on the edge. People in the village would doubt Rosa if she’s seen buying men’s clothes. Hence Higinio is seen wearing his wife’s cardigans. All these visible little details and gathering emotional tension (because of unrelenting fear and paranoia) skillfully immerse us into these two characters’ agonized day-to-day life.

Additional dramatic tension is imparted in the form of an unhappily married civil guard whose lust for Rosa often makes him to stop by the house, requesting her services to mend his uniform. Unable to put up with the sequestered life, Rosa also yearns for a child. When she expresses this desire, Higinio goes berserk. What eventually happens to the civil guard bestows an unbearable psychological burden on Higinio. Some of the dramatic aspects are intriguing: for instance, Higinio’s encounter with the gay couple when pregnant Rosa goes back to her hometown to have the back (and bring it home as her ‘abandoned niece’). Thinking there’s no one at the place, the homosexual couple make their rendezvous there, only to be intimidated by Higinio. To keep his mouth shut, he asks them to deliver a steak daily. The gay postman and Higinio are outcasts of a different kind, and it would have been more interesting if their slim camaraderie was explored more deeply.

Of course, it’s understandable that Endless Trench couldn’t afford, within its 147-minute running minute, to profoundly study all the dramatic subplots. While the trio of film-makers impeccably captures the ebb and flow in the relationship between Higinio and Rosa, Higinio’s relationship with his son Jaime goes through a very predictable trajectory. The son’s feelings for his dad are strictly confined between fear, pity, and hatred. Even though there are no major twists in the narrative, the palpable tension in the first-half keeps us on the edge. But as the external threats sort of wanes in the second-half, the narrative is increasingly tinged with melancholia, and probably it takes some time to get used to this tonal change.

Nevertheless, The Endless Trench doesn’t get repetitive as it cooks up fresh scenarios and adds layers to the intimate perspective so as to zero-in on the nightmares of fascism. Even when a certain subplot doesn’t work, the fabric of the narrative is kept intact, due to the powerful visuals and potent performances. Cinematography by Javier Agirre astutely underlines the feeling of being hemmed in (both physically and mentally). Directors Goenaga, Garano & Arregi though attuned to the individual’s perspective links various historical threads, depicting the evolution of Spain over the decades.

The prolific and splendid Antonio de la Torre (The Realm, The Fury of a Patient Man) astoundingly conveys the anguish Higinio weathers throughout his seemingly relentless imprisonment. The spectrum of painful emotions is just deeply etched in his face. It’s not the first time Antonio is playing a character emotionally deprived by prolonged period of isolation. He previously played the role of political prisoner Jose Mujica (a physically demanding role) in Alvaro Brechner’s haunting Uruguayan drama A Twelve-Year Night (2018). Belen Cuesta, who had won a Goya award for this performance (Best Lead Actress), artfully highlights the weight of being Higinio’s sole protector.

Overall, watching The Endless Trench (2019) during this period of pandemic lockdown, the emotional weight of isolation as experienced by the film’s protagonist delivers a much deeper impact. Though set against the backdrop of Franco’s Spain, it’s a timeless narrative on the endless depletion of freedom caused by the climate of fascism.