Bright (2017), directed by David Ayer and featuring Will Smith and Joel Edgerton, looked like a fresh and original entry in the fantasy genre that is filled with remakes, reboots, sequels, prequels, and watered-down adaptations. But then the movie ended up being bad, which killed its chances of getting a sequel. And the fact that its writer, Max Landis, turned to be a sex offender motivated people to wipe any and every memory they had about the movie. So, when you see the words “based on the live-action movie Bright” before watching Bright: Samurai Soul (2021), don’t feel sorry for not recalling the experience of watching such a movie. It’s totally okay to view this anime as a standalone film that’s associated with nothing.

The Kyōhei Ishiguro directorial, written by Michiko Yokote, takes place in an alternate version of Japan’s Meiji Restoration era which is populated by humans, orcs, goblins, fairies, and elves. The narrative starts off in the past where two opposing forces battle to get hold of a mystical wand that has the power to bring light into the world or cover it in darkness. Thankfully, after a sacrifice, the darkness is vanquished and some semblance of normalcy is restored. Several years later, in the present, the light and dark engage in a cold war of sorts to get hold of that fabled wand again by hunting down elves. And a Rōnin samurai named Izou (Yūki Nomura/Simu Liu), an orc named Raiden (Daisuke Hirakawa), and a young elf Sonya (Shion Wakayama/Yuzu Harada) find themselves in the middle of this mess.

Related to Bright: Samurai Soul – Seven Samurai (1954) Review: The Most Influential Film of All Time

The biggest draw about the movie is its look, which blends 3D animation with art in the style of Japanese woodblock prints. Now, 3D animation has been very hit-and-miss outside of Disney and Pixar. The reason is usually money-related but almost no one has been able to perfect it. One of the biggest animation studios, Studio Ghibli, tried their hand at it with Earwig and the Witch (2021) after defining the 2D animation space for generations. And it was panned brutally. 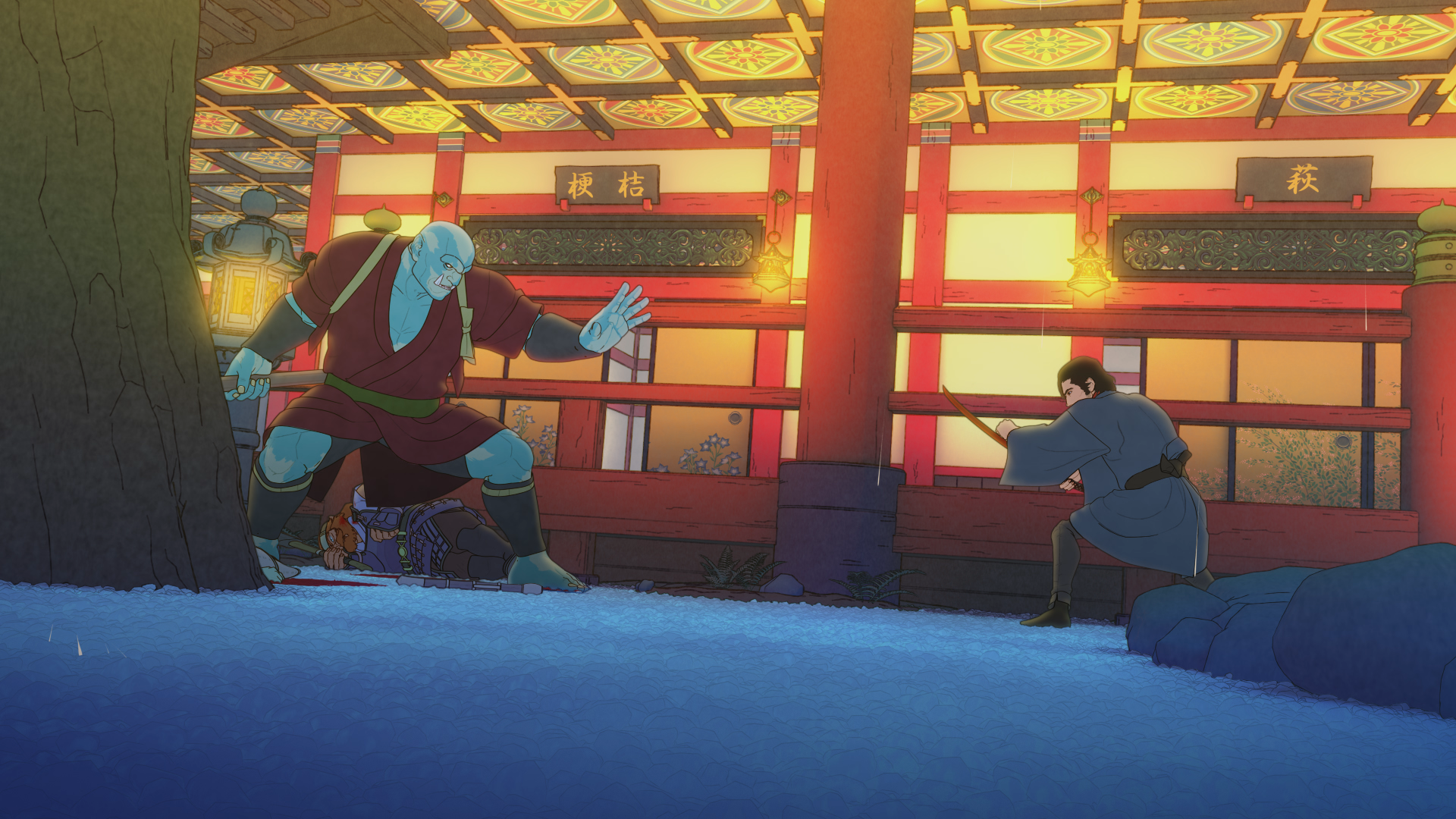 However, in Bright: Samurai Soul, it seems like this form of visual storytelling has been brought up to a pretty competent level. If you want to be very pedantic about it, you will notice that shadows aren’t used in a logical manner. In the exterior settings, the light source i.e. the Sun is always at 90 degrees in comparison to the ground. Even when there is a different light source, there aren’t proper shadows and the images look a little flat. But weirdly enough, with the camera movement, character animation, and cloth modeling, it all comes together brilliantly.

The detailing is truly insane. For example, there’s a hairpin (which is an incredibly important hairpin) with dangly bits attached to it. And every time the person holding it moves ever so slightly, you will see the aforementioned dangly bits move as well. Coming to the animation, the movements focus on the weight category of each character (which are designed by Atsushi Yamagata), thereby making them feel tangible.

The sound direction by Jin Aketagawa undoubtedly adds to the physicality of the world. But even without it, you’ll be able to tell how strong or weak or vulnerable or confident Izou, Raiden, Sonya, etc. are just by the way they walk, get up, jump, or simply turn. There are points where you’ll start to think if all of this has been motion-captured and then put into these beautiful sets designed by Hisashi Kubu, virtually shot by DOP Hikari Sugiyama. However, at the time of writing this review, there is no information available on the use of motion capture. So, we have to assume that it’s completely computer-animated.

If that’s impressive for you, please be prepared to be blown away by the action choreography and editing (by Kyohei Ishiguro). Full disclosure, it can get a little overwhelming as the freedom with the virtual camera allows for some truly dynamic angles and movements. That leads to the breaking of the coveted 180-degree-rule (which is a film-making technique where an imaginary line is drawn to move the characters and the camera in a coherent fashion) quite a few times. When the movie isn’t doing that and following the flow of the fight, amplifying every swipe of Izou’s sword or Raiden’s roided take on a kanabō, it looks fantastic. 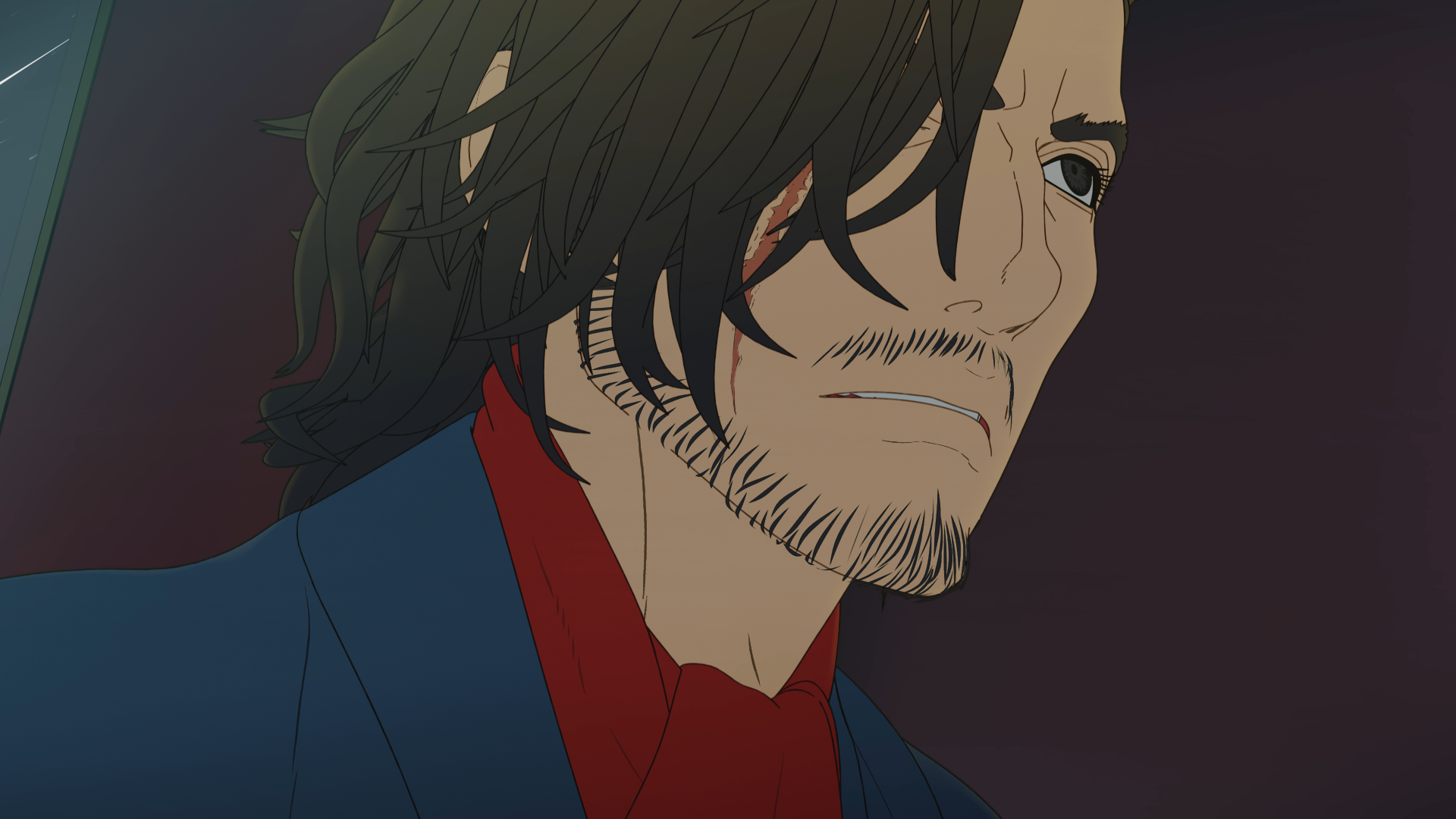 On top of that, it doesn’t shy away from gore. Limbs are cut. Heads are crushed. Bodies are impaled. You know, the whole shebang. The only questionable thing out of all the technical aspects is the music by LITE, which seems to be going for a retro, synth vibe. However, nine out of ten times, it sounds off-putting and out-of-place. Maybe if the setting wasn’t Feudal Japan, it would’ve worked. In this particular scenario, it definitely doesn’t.

The plot of Bright: Samurai Soul is wafer-thin. There aren’t a lot of emotional stakes. It completely depends on its visuals and the acting prowess of its voice-cast. Nomura brings a lot of melancholy to Izo. Hirakawa starts off as someone who is rough around the edges and eventually becomes warm and comforting. Wakayama really swings for the fences as Sonya. Sakamoto as Chihaya and Anna exudes elegance in her characters’ brief appearances. And Miyavi is definitely sinister as hell as Master Kōketsu. The character arcs and twists are plain as well as predictable. So, don’t go into it expecting to be surprised or overwhelmed with emotions.

Given how Landis, an alleged sex offender, is the architect of the Bright universe, there’s a chance that if you watch Bright: Samurai Soul, he’s going to profit off of it. So, unless there’s confirmation that he isn’t going to make any money from this movie, it is risky to recommend it. Without a shadow of a doubt, the craft on display is immaculate. This is some of the best 3D animations that your eyes are going to see. You can pause on almost any frame and it’s going to look like a work of art that you can print and hang up on your wall. The voice-work is on point. It has the potential to spawn spin-offs set in other alternate historical settings. And it deserves all the hype, praise, and love in the world. But the caveat remains in the form of Landis. Do whatever you want to do with that information.

4 Secrets Gambling Sites Do Not Want You to Learn About

The Baby-Sitters Club (Season 2) Review: A delightful continuation that doesn't lose its essence