The Suicide Squad (2021): A Satire on America’s Advocacy of Violence for Peace & Need To Maintain Power: Political satire in cinema has been a topic of discussion for decades. Propaganda films often use satire to serve the interests of their creators and have been both conservative and liberal in the ideas they disseminate. That such propaganda would be considered seriously when conveyed through comic book movies is not something that could have been foreseen when Adolf Hitler and Joseph Goebbels made movies in the 1930s to instill nationalism in the people of Germany. Comic book movies have changed the manner in which content is consumed by the general audience. With legendary directors like Martin Scorsese adding controversy with commentary on how Marvel movies aren’t real cinema, the discourse on what role comic book/superhero movies encompass in society remains ambiguous.

The recent developments in Afghanistan with the overtake of Kabul by the Taliban Militia have turned the world’s eyes to the United States of America. After 20 years of parading themselves as the beacon of hope and peace against terrorism in Afghanistan, the USA has been utterly humiliated to the extent that the president has to argue against comparisons made to The Fall of Saigon in 1975. Officials have been forced to resort to mercy negotiations to airlift members of the US embassy and armed forces out of Afghanistan, leaving all the country’s citizens to be pushed back into the dark ages of misogyny and patriarchy. This White Knight Syndrome turned disaster identity that the USA embodies is what James Gunn’s The Suicide Squad (2021) attempts to satire.

Prior Review of The Suicide Squad (2021): An Optimistic Orchestra of Exploding Organs

The Suicide Squad (2021) acts as a standalone sequel to the 2016 David Ayer movie Suicide Squad. Featuring returning cast members as well as new misfits and villains donning cape crusader-like personas, the movie follows the Suicide Squad as they go on a mission to destroy evidence of ‘Project Starfish’, something which could tarnish the image of the US government. While the film in itself embodies Gunn’s style of directing; funny, high-paced, gory with lots of action and cringey character interaction, it doesn’t take itself seriously. This allows it, while not being one of the best comic book movies, to still keep its audiences entertained. However, unlike the feeling of preachiness felt with recent Marvel films, the socio-political commentary that The Suicide Squad provides is upfront and unapologetic. This being the hypocritical advocacy of necessary violence for peace and the greater good which is unwelcomely exercised by the USA, worldwide.

Gunn seems to scrutinize the United States of America for claiming themselves to be the global harbingers of peace. Their nose-dives into the politics of the rest of the world in the name of assisting in political stability but have led the countries to ruins is what he seeks to scrutinize through the satire, The Suicide Squad. The person in charge of Task Force X (The official title of the Suicide Squad), Amanda Waller, has repeated dialogue that criticizes a particular political regime and ends it with “it is potentially cataclysmic for Americans and the world”.

Gunn has written so as to draw attention to how America believes it always comes first and then “the rest of the world”, almost as if America is the architect of human civilization and the rightful judge of it. When Waller briefs her crew about their mission, “Your mission is to get into Jotunheim and destroy every trace of something known only as Project Starfish”, no one from the crew is explained about what the threat is or why they are set out to do this duty. Only that, on completion of the mission, they get ten years reduced from their life sentence.

Also Read: Wonder Woman (2017): Why It Worked But Other DC Movies Didn’t

From the very beginning, we are shown how ruthless Waller is as she unapologetically uses a part of her team as bait for a second team to perform their mission. When asked how to proceed in dealing with an estranged convoy in a jungle where the leader of the team, Rick Flag, is located, they are ordered by Waller to “Terminate his (Flag’s) captors with extreme prejudice. Kill anyone you see. These are dangerous people”. The squad goes on to kill everyone in the area “with extreme prejudice” even as they are unarmed and receive no counterfire.

Ironically, in the end, it is revealed that the people they killed were actually the resistance against the regime the Suicide Squad was ordered to infiltrate. This senseless killing is singled out to be the primary reason why America has an antagonized image of themselves as innocent lives are lost in the crossfire. The leader of the rebel forces, Sol Soria, disgustedly highlights this attribute, as she says, “Typical Americans. Just run in, guns blazing” and later goes on to further say, “I’d make a deal with the devil to stop them (corrupt government)”, referring to the Americans as devils.

This targeted hate against the USA is again referred to when the head of the corrupt Corto Maltese regime, General Silvio Luna, compliments Harley Quinn as he claims that, “Harley Quinn’s fire and rebellion in the face of American oppression is something to which my entire country aspires.” Towards the end of the film, The Thinker reveals how the very ‘Project Starfish’ that the Suicide Squad was assigned to destroy was indeed an American-made hazard. The Squad was tasked to eliminate any traces of it as it would tarnish the country’s image. He explains how “Your (The Squad’s) government didn’t send you here to protect the world from alien technology. Your government sent you here to cover up their part in it.” He further explains how America brought the alien, Starro, from outer space and tried to weaponize it even after the Cold War ended. However, they were unwilling to conduct experiments on American soil. Therefore, a secret pact with the Corto Maltese government had to be made, and with the fall of the original government, America lost control of Project Starfish.

Prior Essay On The Suicide Squad (2021): The Pied Piper of Corto Maltese And The Chaotic, Entertaining and Insightful New Movie By James Gunn

Besides the apparent finger-pointing and outspoken hatred towards the US, there are symbols of forced American nationalism peppered throughout the film. The Suicide Squad as a whole can be interpreted as a metaphor for the armored forces America sends out to foreign lands with the prospect of “spreading peace”. Soldiers are made to travel to Afghanistan, Iran, Iraq, and other parts of the Middle East and forced to participate in wars that have nothing to do directly with the safety of their home country. The bombs implanted in the back of the skull of the Suicide Squad become a metaphor for systematic nationalism that has been ingrained in the minds of soldiers, forcing them to take part in the pointless violence and harassment of innocent people. 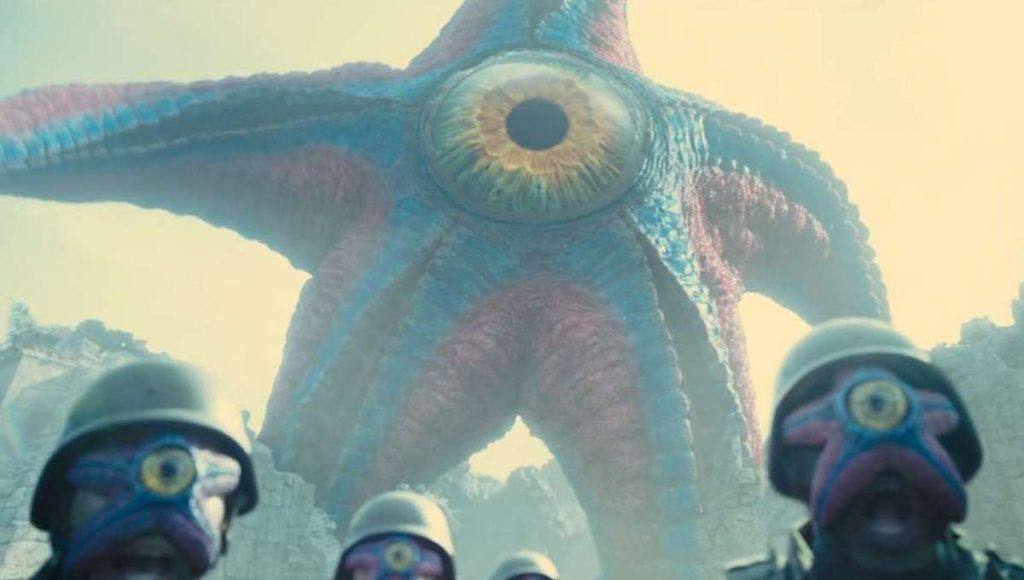 While it is true that what the US has been doing is not entirely pointless, there comes a point where one realizes that the inherent and often uninvited interference of the US in matters of foreign nations may be the critical factor in the animosity towards the country. A hint towards this is also mentioned at the end of the movie when Starro dies as it says, “I was happy, floating, staring at the stars”, implying that it was never its intention to cause harm or hurt the people of Earth. Still, it was forced to act out of the need to survive and thus be a threat to humanity. An alien from outer space was brought to Earth with the intention of being weaponized and had to die a gruesome, lonely death because it wanted to be free from the shackles of its oppressors. In a way, Starro then becomes a metaphor for the victims of pointless wars that the USA has picked throughout its existence and the countless deaths it has resulted in.

The most notable parody of America’s violent methods for peace is through the character of Peacemaker, who claims “I cherish peace with all my heart. I don’t care how many men, women, and children I need to kill to get it”. This very dialogue encompasses everything wrong with America’s approach to attaining peace. With clothes that have the colors of the American flag and dialogues like “Nothing like a bloodbath to start a day” Gunn shows how deluded and polar the Peacemaker is when it comes to the idea of what peace is, and similarly, America. The crest on his chest shows a dove flying inverted, antithetical to the dove associated with peace. His blood splattering killings to one-up Bloodsport in a competition of who can kill in the fanciest manner all go against what his character ideally stands for (or at least what his name stands for). Perhaps his most twisted trait is how he claims to kill for his country and the safety of it, further displaying a mentality of the “US” (read as both the United States and us) before them mentality; an elitist mentality that seems to believe itself to be the author of world politics and diplomacy.

Decades of American cinema have catered to Eastern audiences a version of America and its soldiers as the heroic central figures against villains plotting world domination or something cheesy along those lines. Gunn sabotages his country’s glorified identity by taking the worst of the worst, making them heroes that audiences care for but simultaneously making it evident that the characters aren’t good people. In the end, the evidence about Project Starfish is not revealed to the world, and the American Government program, ‘Task Force X’, continues through Amanda Waller. There are no good people: only bad people and worse people who are not held accountable for their actions.

In denying the truth to the public of heinous acts committed by the government, this ending shows a real-world problem that has raised a lot of eyebrows and has had fingers pointing. Declassification of evidence and truth is something the general public demands. With films like Argo (2013) and recent films like The Courier (2021), we see how intelligence is withheld for the safety of the country but simultaneously also witness this constant “us versus them” mentality that western powers have been emissaries of recurrently throughout history. A need to reject this mentality by the East is of urgent need as it is our romantic view of the West that allows them to be in power to make decisions on behalf of the rest of the world.