Western genre in the 21st century has often been declared obsolete. But the narratives set in Wild West don’t just deal with gunfights, cowboys, and Indians. It tells the story about society and with each distinct perspective there’s always space for revision and reinterpretation. Kelly Reichardt’s Meek’s Cut Off (2010) and First Cow (2019) are unique examples of how a fresher look at frontier life can consolidate location-specific as well as timeless themes.  Moreover, what makes Westerns still relevant and universal are the familiar ideals that are often contemplated by humans, irrespective of the setting. Unfortunately, Potsy Ponciroli’s Old Henry (2021) neither offers a unique spin on things nor offers a riveting homage to the old Westerns.

The versatile and consistently wonderful Tim Blake Nelson plays a rare protagonist role in Old Henry. The narrative opens in 1906 Oklahoma as the eponymous widower character lives on an isolated farm with his curious and meek teenage son, Wyatt (Gavin Lewis). Early in the film when Henry throws the offal to the pigs, his son asks, “Don’t it ever bother you sometimes that they eat their own?” It’s hinted that Henry has witnessed a lot of ‘eating its own kind’ thing. And of course, there’s a black-hat-wearing villain with rugged looks, who in the prologue tortures a man and hangs him. Inevitably, the villain will enter into Old Henry’s territory. 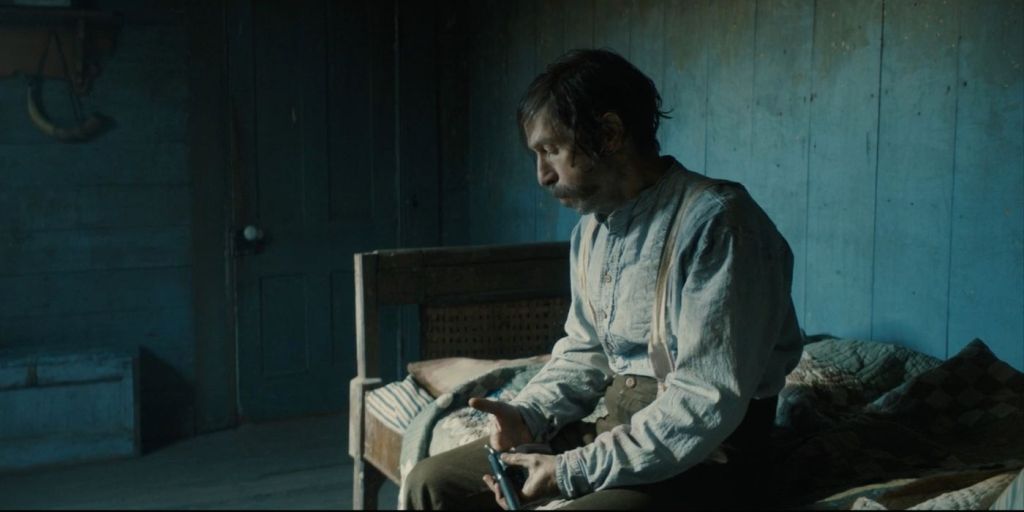 Before that in order to provide emotional investment and intrigue, we are introduced to Uncle Al (Trace Adkins). The domesticated Henry with the humble exterior soon finds a wounded young man, Curry (Scott Haze), and a satchel full of money which signals big trouble. Henry saves the stranger and hides the money, but not before Wyatt sees the hiding place. Soon the bad guys led by Stephen Dorff’s Ketchum poses himself as sheriff, and questions Henry about a fugitive. Incidentally, Curry claims to be the real sheriff who says he went after the bandits and got back the money they stole from a bank.

Related to Old Henry: The 15 Best Westerns of the 21st Century

Henry isn’t really interested in who are the good or bad guys. He smells trouble both ways. He understands whoever is right, he and his son will be caught in the stand-off. After more brooding comes the third act, which sort of saves the film from being an utterly boring Western to a mediocre one. The legend behind Henry’s real identity is gracefully revealed. The masterful action sequence played to Jordan Lehning’s beautiful cello score slightly lifts the narrative out of its stubbornly corny premise.

Nelson as usual performs his role with great gusto. He infuses energy into even some of the inane dialogues. Like when he amusingly drawls, “You got the wrong pig by the ear.” Moreover, Nelson has already proved his supreme ability to play a hick character; case in point: ‘O Brother, Where Art Thou?’ & ‘The Ballad of Buster Scruggs’. His co-stars including Dorff and Haze also seem to have a good time, cheerily hamming it up to usher in the old-fashioned Western vibe. But the writing is annoyingly shallow. Ponciroli sets up the conventional or clichéd Western tropes with a relish.

The problem is the writing or the characterization makes us easily comprehend the narrative turns and twists by a mile. Is Curry a sheriff or an outlaw? Is Ketchum leading a posse or mercenaries? There’s some scope to create psychological tension regarding the character’s identity. But we never doubt who’s who. Even the emotional background or the father-son relationship didn’t resonate a bit with me.

John Maclean’s lean Western Slow West offered a revisionist take on the standard themes, whereas Craig Zahler’s Bone Tomahawk turned out to be a bloody satisfying genre exercise. With Old Henry, Ponciroli doesn’t attempt to modernize the genre which isn’t a crime. Budd Boetticher was neither a Sam Peckinpah nor a John Ford. Nevertheless, his lean and cleverly subversive Westerns are still greatly entertaining.

Overall, Ponciroli’s Old Henry (99 minutes) has plenty of beautiful shots of wide horizons, but sadly it has very narrow ambitions, and whose execution largely falters.

10 Classic Black and White Horror Films That Still Hold Up