Some of the most magical films out there are related to the life of food. It takes a certain directorial elegance to make food in movies sing. Films like Julie & Julia and Chef achieve this primarily through delectable sounds and enticing colors. There’s something enchanting about watching someone slice and dice an onion with grace, or ice an elaborate five-tier cake from start to finish, that makes good films utterly captivating. 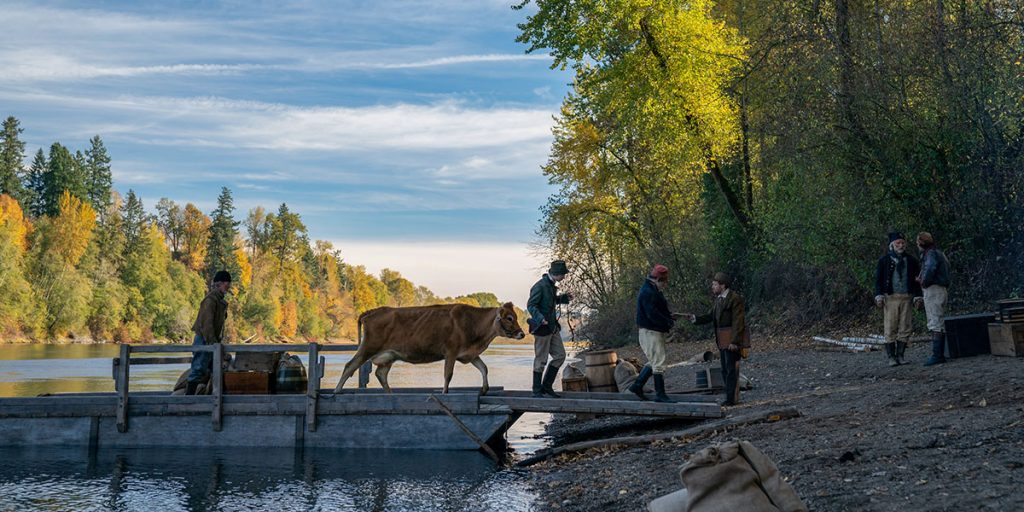 These movies are practically arousing; they awaken the senses, entice and enchant. Often what they lack, though, is nuance. The food movie is an easy watch because it’s played out on a surface level, the premises based almost solely on desire. First Cow, a charming drama by Kelly Reichardt, is far less myopic, taking a cerebral approach to the life of food, expertly weaving subtle political commentary into a story essentially about ambitious bakers.

Reichardt’s reimagining of 2004 novel The Half Life, by Jonathan Raymond, follows two travelers in the 19th century, Cookie and King-Lu, as they attempt to make their fortune on America’s frontier. Lu is on the run when he meets Cookie, who takes pity on him and offers him food and shelter for the night. The two men strike up an unlikely friendship, eventually deciding to go into business together, as well. Lu is the ideas man, and Cookie bakes delicious and popular ‘oily cakes’ the two sell at a local market.

You may be wondering where the ‘First cow’ comes in. Well, she’s the catalyst for the entire story. What makes Cookie’s oily cakes so popular amongst the townspeople is the secret, illicit ingredient – stolen milk from the only cow for miles. The cow is owned by a well to do businessman, Chief Factor, the only man in town rich enough to enjoy milk in his tea.

This is where First Cow departs from the conventional food movie – addressing the conditions under which food is created and shared. Resources are scarce in the Pacific Northwest and locals are forced to bear with bland and simple food. Before watching First Cow, it had never even occurred to me how crucial milk is to the baking process. The thought of someone not having access to flour, or salt, or sugar- First Cow had me checking my privilege. The story offers a potent (and very necessary) reminder of what we as a society take for granted.

There’s a reverence around the baking process in this film that is truly endearing. Cookie, for example, speaks to the cow while milking her, addressing her with utter respect and humility. He even offers his condolences for the loss of her “husband” and calf. The notion of food as a sacred resource seems to be imbued in the visual storytelling as well- in one particularly intriguing scene, we see the titular cow being rowed across the river on a floating platform, like some sort of hallowed water spirit.

It’s rare to find something like milk presented in this way, and Reichardt certainly pulls it off. In part, I think, because the problem of scarcity is plaguing the modern mind at this time in human history. Hating capitalism isn’t just a popular ideal, it’s a fury that’s come to define an entire generation. First Cow tackles this decidedly modern neurosis by touching on some prominent issue in today’s discourse- wealth distribution, class conflict, inequality and labour, to name a few- by taking us back to one of the earliest backdrops of colonial capitalism.

These issues are impressively distilled into different scenes throughout the story. Lu, for example, is noticeably ignored by Chief Factor, who will only acknowledge Cookie. As an immigrant and a “Chinaman,” Lu lives outside the borders of privilege and access. Cookie, too, is not afforded the privilege of having the right ingredients. These simple but telling narrative elements make First Cow a storytelling triumph – not to mention its well-crafted style.

Reichardt isn’t afraid to make the audience wait, and our patience is certainly rewarded. Long, drawn-out scenes are as charming as they are curious, paired with hypnotizing sound design. From the thud of blueberries hitting the bottom of a wooden barrel, to the sizzle of batter hitting oil, we’re left salivating. First Cow is a quiet film with a gentle soul and a well-intentioned message. Undoubtedly one of 2020’s best films.

The Employer and the Employee [2021]: 'Cannes' Review - A Modest, Bleak Portrait of Class Privilege and Indifference