Yuzo Kawashima’s classily made farce, Sun in the Last Days of Shogunate (Bakumatsu taiyo-den, 1957) was set in the year 1862 in a Shinagawa ward brothel, situated in Tokyo. Nevertheless, Kawashima sets his prologue in the then-contemporary Japan which was recuperating from post-war devastation and American occupation. The Diet of Japan passed the Anti-Prostitution law on May 1956. Since most of the business came from American GIs in the post-war period, the politicians of the time – once the Occupation ended – united across party lines and linked prostitution to Western influences. A cursory look at Japan’s contemporary history, however, reveals that such laws didn’t prevent prostitution, but was in fact liberally interpreted, contributing to the extremely thriving sex industry.

Under the ruse of addressing socio-political issues of 1860s Japan, Yuzo Kawashima in Sun in the Last Days of the Shogunate actually parodies the general consensus of 1950s that actively assigned blame on foreigners for the downfall of the Japanese society. This is the crisscrossing story of bumbling samurais and guileful prostitutes which is brutally honest and surprisingly fun. Mr. Kawashima sustains a carnivalesque mood throughout the narrative without overlooking the stigma associated with prostitution or the socioeconomic realities which pushes the women into the profession. His protagonist is Saheji (Furanki Sakai) – referred to as ‘Grifter’ – a commoner whose raison d’être is to have fun. 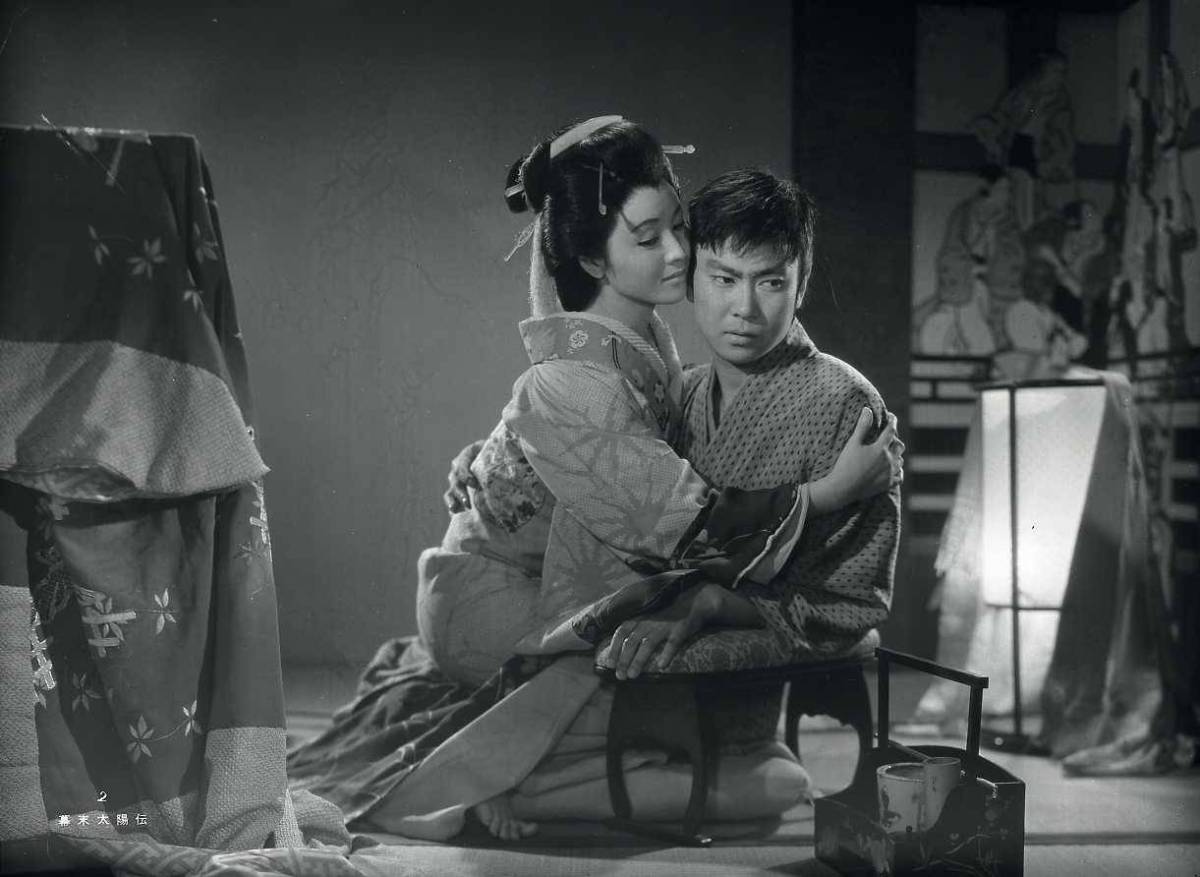 The film opens at Shinagawa Street as a group of samurai revolutionaries chase down a British man riding the horse. One of the samurai drops his pocket watch. Saheji the ‘Grifter’ picks up the watch and enters a rest stop with four other guys he has promised to treat. After having a riotous time at the inn, the grifter confesses that he hasn’t a penny to his name and offers to work there. Soon, he becomes an indispensable member of the inn’s staff, arming himself with the knowledge about the guests, prostitutes, and the inn-owners. He comes up with ingenious solutions to overturn the array of quotidian conflicts and proves to be quite resourceful in mixing medicinal potions.

Related to Sun in the Last Days of the Shogunate: The Tale of Zatoichi [1962] – The Magnificent First Chapter Featuring the Illustrious Fictional Swordsman

Characters in Kawashima’ movies often intrude on one another, and with such a unique setting, people literally intrudes, crashing unceremoniously into rooms or dash hurriedly between spaces. Two characters here are always on the movie: one is the grifter whose movements around the inn enable him to inveigle himself into the good graces of the different classes of people visiting the inn; the other is a popular resident prostitute named Koharu (Yoko Minamida) who gives handwritten declarations of love, and promises to marry some of her wealthy clients. Koharu’s intention behind these declarations isn’t to leave behind her life as a prostitute. She rather plays up to the men’s tendencies to seek relations outside the strictures of their professional and family lives. In fact, Koharu is more hedonistic, compared to the traditional melodramatic portrayal of ‘fallen women’ in Japanese cinema. Nevertheless, Koharu’s hedonistic attitude is reflected as an ‘understandable’ reaction to the economic and social oppression.

Koharu’s chief competitor is Osome (Sachiko Hidari) who has lot of active clients like Koharu, but not much money. Her efforts to find a suitable candidate to commit love suicide are absolutely hilarious. The young maid character, Ohisa (Izumu Ashikawa) serves as an emotional anchor in the narrative. Daughter of an indebted, gambling carpenter, Ohisa is on the verge of being forced into prostitution by the devoutly religious brothel owners, Denbei and his wife Otasu. They put pressure on the carpenter father to settle his debt by selling his daughter. Ohisa doesn’t succumb to what fate has store in her, but actively seeks out Tokusaburo – the inn owners’ wayward son – and asks him to elope with her.

Adding more humor to these concurrently running story threads is the samurai revolutionaries’ plot to set the explosives on foreigners’ quarter. Led by Shinsaku Takasugi (Yujiro Ishihara), an unpaid samurai guest lazing around the inn, the rebellious youngsters concoct their secret plan to prepare explosives. The hilarity lies in them shouting out their ‘secret’ plans in rooms enclosed within wafer-thin walls. And they are genuinely shocked when the grifter slyly reveals his knowledge about their plan. Writer/director Kawashima flips the genre expectations by looking at the serious-minded samurais and their traditional honor systems through comical presentations. Eventually, the deceptively light-hearted narrative set in a brothel comes across as a microcosm of post-war Japan, burdened with economic uncertainties, and engaged in perpetual conflict between old and new values.

Yuzo Kawashima excels in establishing the chaotic overlapping of characters and spaces. He introduces a menagerie of brothel residents, staff, and regulars that it takes time to grasp the plot and the characters. But once the narrative attains fluidity and focus, the film-maker throws one memorable comic moment after another. The deft characterization of grifter and Sakai’s riotous performance in the central role is clearly the biggest strength of the narrative. 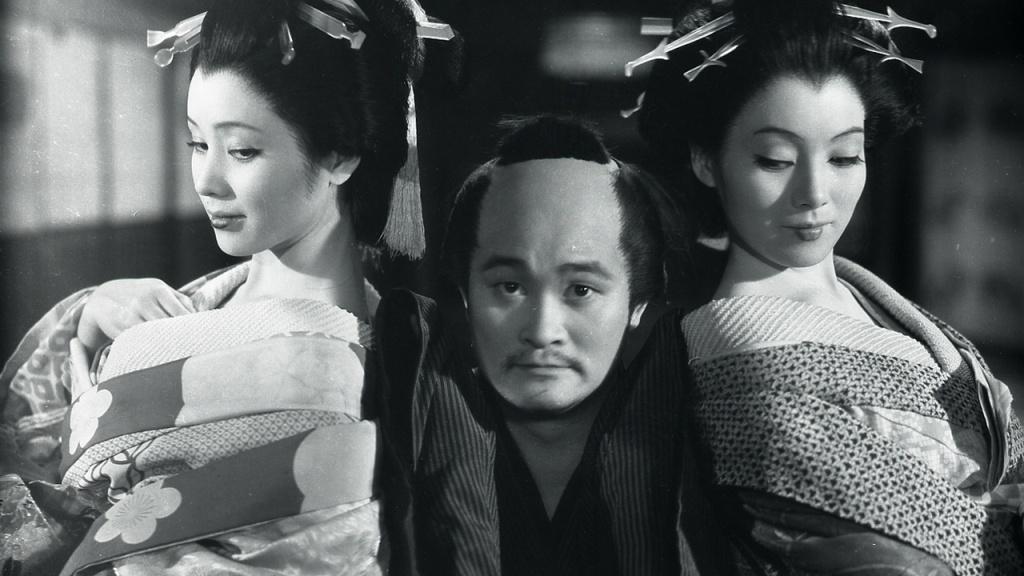 Apart from getting out of scrapes through his quick wit, the grifter is shown to have the foresight to recognize the social and political changes. As he himself says towards the film’s end: “Japan will be a very different country in ten years time”, a passing remark that seems to have more meaning, going beyond the narrative context. Kawashima and his co-writers Hisashi Yamanouchi, Shohei Imamura approaches each sub-plots with striking confidence and imparts layers that almost seems effortless. Though it’s not overtly political like the later works of Imamura, the film is subversive in its own way, showcasing a world thrown out of order and questioning the established norms of society.

Sun in the Last Days of the Shogunate was the first screenplay that Imamura worked on to be filmed. Though he determined to become a film-maker after seeing Akira Kurosawa’s Drunken Angel (1948) and worked as assistant director in Shochiku studio in the films of Yasujiro Ozu, Imamura was considerably influenced by Yuzo Kawashima. He later found fresh ways to tell the stories of people in the lower strata of society, starting from Pigs & Battleships (1961), and became one of the key members of the Japanese New wave alongside film-makers such as Oshima, Teshigahara, Yoshida, etc. Yuzo Kawashima, however, was not much known outside Japan until recent years. In fact, his quirky, multi-layered post-war classics serve as the perfect antithesis to the somber dramas of Mikio Naruse, Kenji Mizoguchi and Yasujiro Ozu.

In 2009, Japanese film magazine ‘Kinema Junpo’ listed its top 100 Japanese films of the 20th century, in which the then relatively unknown Sun in the Last Days of the Shogunate occupied the fifth place. Overall, it’s an amusing as well as a thoughtful portrayal of the duplicitous and expedient aspects in the ‘civilized’ society.

Parallax [2020] Review: A Film Occupied with its Intention but Stumbling in its Execution