A piece of art is an expression of rage. Rage is a function of awareness. Awareness is an outcome of curiosity. And curiosity is a virtue of existence. In Michael M. Bilandic’s Project Space 13, the rage is evident via the confrontational form of his screenplay wherein three people of three different schools of thought and naturally, three different stories find themselves virtually locked in a performance art gallery for a night amidst a situation of unrest. I choose to focus on the difference in their schools of thought primarily because it is reflected in their banter that is not just a marker of their character but also a meta engagement with the audience.

The period is a pre-vaccine COVID pandemic that has taken shape of mass unrest and havoc in the film’s universe. Protestors of an unidentified kind are moving across the streets of New York City, destroying capitalist establishments and perhaps, looting, for the period is also of uncertainty. We have collectively been through the worst of the global health crisis and we still don’t know what is yet to come. Panic is only precautionary. In a clever display of efficiency, real-life situations are used to augment the film’s narrative while they are not named to avoid resemblance and therefore, controversy.

An art gallery owner Pieter, played by Jason Grisell, hires Ace, played by Theodore Bouloukos, and Evan, played by Hunter Zimny, of private security to protect, or rather, provide an illusion of protection the gallery that also inhabits performance artist Nate, played by Keith Poulson, who has locked himself in a cage for 120 days and is aided by his robot companion Zebos. Nate is reliant on Pieter for protection and Pieter is an archetypal capitalist detached from the raw form of the world but nevertheless pretending to be attached to it. It is given that Pieter values Nate only as an asset and the film isn’t shying away from insinuations such as this. 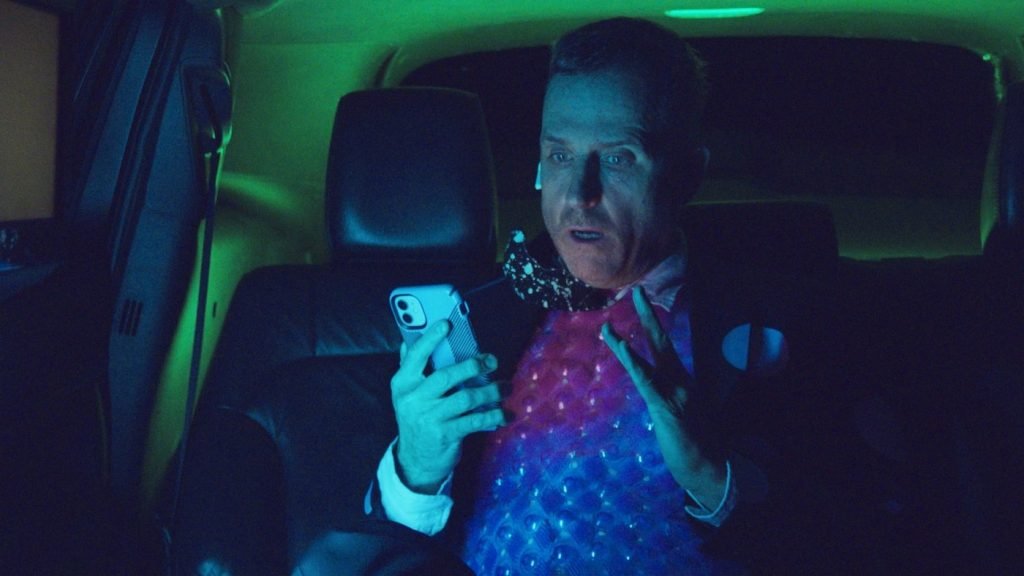 The rest of the film’s flesh comes from the conversations between Nate, Ace, and Evan. Nate is an embodiment of an obnoxious artist who attaches a much greater value to his installations and performance art than what they intrinsically possess, satirizing the pretensions of avant-garde art. Ace is an embodiment of the precipitated ills of American society marred by individualism, violence, gun culture, and economic inequality. Evan, on the other hand, is the embodiment of marginalized debt-ridden American youth. Every character is a direct metaphor and so their stories, although correct, are also predictable.

When I talked about rage manifested into art, I was pointing out to this film. It is evident that Bilandic’s passive rage against the trends, conventions and ills of society has taken shape of this small comedy film. On the one hand, it is critical of the violent social attitude of the previous generations and the institution of police, while on the other hand, it is critical of the current generation’s obsession with outward appearance and reception. There is a conservative undertone in the way the film projects its social criticism. Sure, it talks about the issues such as gun culture but when setting up the contrast between the problems of the two generations, it inadvertently trivializes the problems of the current generation when instead, it should have only been a testimony for the abuse faced by the last generation. The film is empathetic but also divergent in its motive, for it wants to comment upon a lot of things in the light of the current world order.

What it does quite ably is the production of humor. You can say it has its witty, funny moments, and considering the small runtime, it comes across as a nice afternoon experience altogether. It peaks in its final moments with an indulgent monologue that must be read between the lines. As relevant as it is funny, it provides a quasi resolution to a film that would have met its inevitable termination with the daylight in the story. If one is looking for ideas on efficient film and stage productions, while also eyeing some entertainment in the process, Project Space 13 will prove to be an interesting title.

Golondaaj [2021] Review : A High-Strung Sports Drama with Little Else to Look Forward to

Outlier [2021] Review: Psychological thriller about abuse drags to a finish