The COVID-19 pandemic has been a source of pain and suffering for many throughout the world. Alongside that, it has also been a source of unforeseen creative measures in the world of cinema. As Lockdowns and Social Distancing started to become the new normal, filmmakers have to travel to hitherto uncharted waters and find newer storytelling techniques along the way. The Filipino film Here and There (Dito At Doon) also attempts at something newer while using otherwise conformed Rom-Com tropes.

Director JP Habac starts off exactly how one expects a Rom-Com to start, by introducing the leads, Len (Janine Gutierrez) and Caloy (JC Santos), and the meet-cute. Just, in this case, the meet-cute could not have been a “stumbling into each other” in real life, as the pandemic has taken care of that, it happens in the virtual world. In a quite relatable manner, the pair gets into an online debate on social media. After exchanging quips and jabs over social media, they coincidentally (not so coincidental in a Rom-Com though) meet each other again through some common friends.

Obviously, this had to blossom into friendship and then more. However Habac, and screenwriters Alexandra Gonzales and Kristin Barrameda do not remain content with the scope of Rom-Com in troubled times, which is good for the viewers. When at first it seemed that Pandemic is merely a backdrop to set a usual romance, it becomes much more of an obstacle as the film progresses. It quite innovatively did not let the audience ever forget that Len and Caloy are not physically ever together while showing the longing in a mirage as if they were. 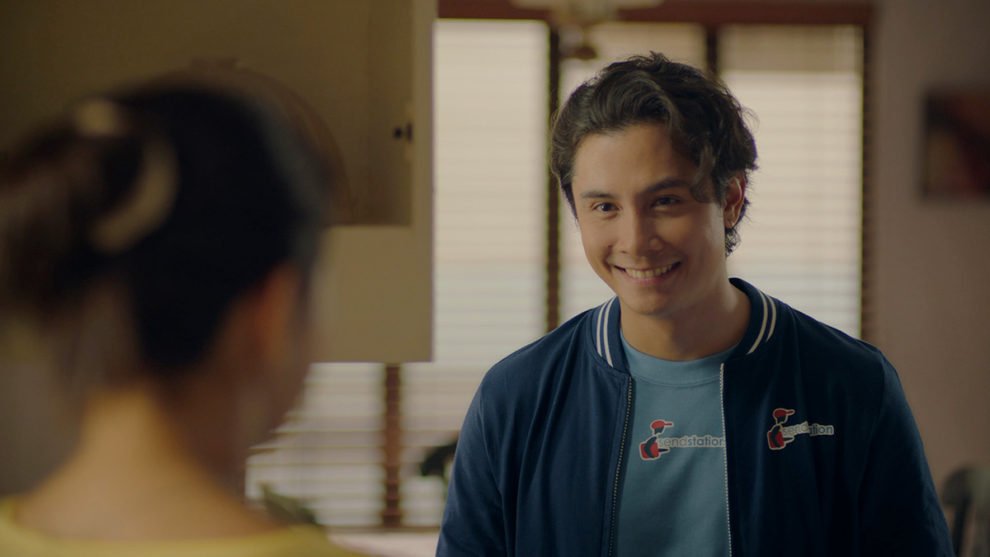 For this, video calls were chosen, which is something that became quite ubiquitous in this post-COVID world; and Habac employed quite a bold mise-en-scene. Whenever Len had a video call with Caloy, or with her friends, Habac chose to have the characters appear in the same room. As if the physical barriers were never there. This achieves two things. It makes it easier to establish one of the key elements of a Rom-Com, the chemistry between the leads. The banter, the romantic flirtations, the exchanges of glances; would have been much harder to portray through a Zoom call without losing the cachet of these tropes. This also reflects the desire, the wish of being together physically, and the longing of not being able to do so during the pandemic.

But as soon as the audience gets accustomed to this illusion, Habac, mid-scene, would jump back to the traditional portrayal of people having a call, which is cutting between the characters in two different locations. And the audience gets a reminder of the reality.

Another praiseworthy moment of smart filmmaking technique would be how Habac played with lighting and tone of the shots during those aforementioned video call scenes. Len is a strong-minded woman with perhaps a touch of naivete, and Caloy is a realist and aware of the hardships of life. Len is shown to be quite well-to-do financially, whereas Caloy depends on each day’s works to earn. The stark differences of their circumstances and not so stark differences of their personalities were shown by the lighting of their scenes. Habac used warmer and more vibrant yellow light while showing Len’s surroundings, but incorporating cooler and flatter light for Caloy’s surroundings. These lightings were used in the same scene where the characters were depicted (while actually physically not being together) to be in the same room, Habac used the lighting in interchange shots to get us a glimpse of the situations of each character. 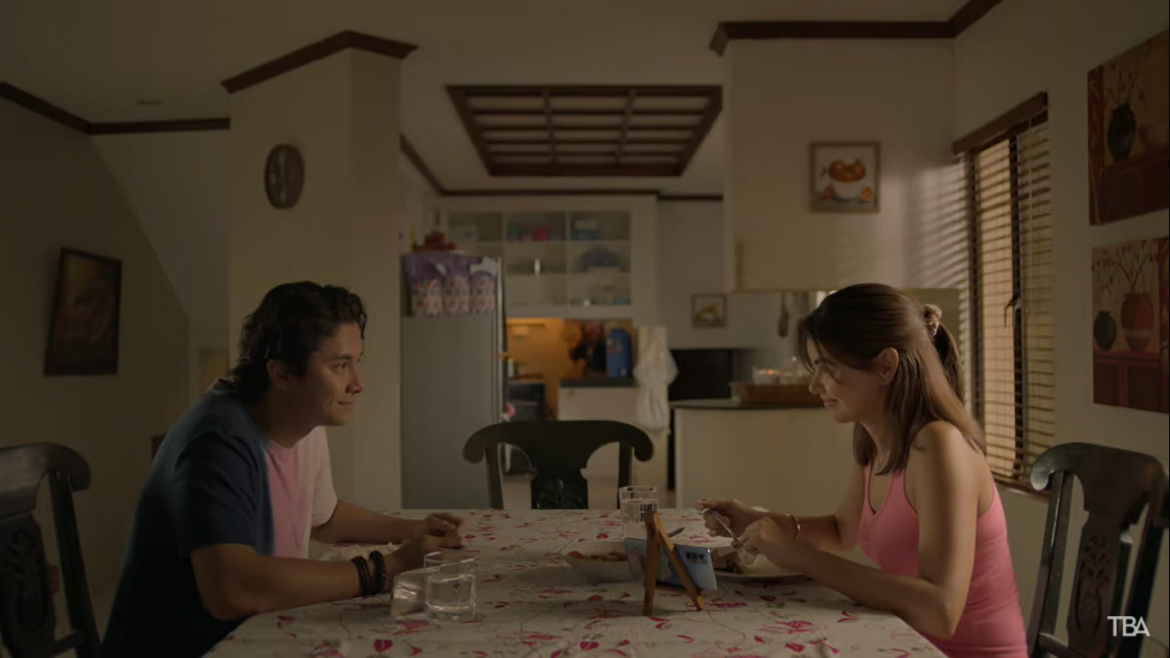 Janine Gutierrez and JC Santos were charming in their roles. Both of them added a sincerity in their respective roles that elevated their characters from the Rom-Com tropes. They had a certain conviction in their portrayal, which helped their characters’ conflict to seem as natural as possible.

Because the conflict Habac and his screenwriters chose, was a novel one. This is where Dito At Doon didn’t become just another pandemic film, where everything is pretty much the same with the COVID-19 pandemic in the background. Dito At Doon did not follow the usual Rom-Com route of love and its rightful conclusion but allows the pandemic to take over. For a globe-changing event like that, it has to have more importance than being just the backdrop. The pandemic and its associated lockdowns are bound to have implications that are not been previously seen before. Kudos to Here and There for exploring that and trying to provide a deviation from the norm, while still presenting a wholesome escapade of romance.

Here and There Links – IMDb