Appropriate context should be given before jumping into the minutiae of this documentary. The documentary concerns the religious group Falun Gong, which was founded in the early 1990s and is mainly associated with the Qinqong movement in China, which usually comprises the slow movement, meditation, and preaching of Buddhism mixed with Taoist practices. According to the founder, Li Hongzhi, Falun Gong is more devoted to “the purification of one’s heart and attainment of spiritual salvation”. The movement had enjoyed the support of the Chinese Communist Party (CCP) initially until the proliferation and increase in membership of Falun Gong (or Falun Dafa) led to their being viewed as a potential threat. This led to a systemic crackdown against the practice, from blocking internet access and banning visas for people researching the Falun Gong to declaring the practice as a “heretical organization” responsible for social instability. Eternal Spring, directed by Jason Loftus, chronicles comic book artist Daoxing’s recreation of the events of March 5th, 2002, when a state TV station in China was hijacked by members of the Falun Gong.

Falun Gong mission was to counter the nationalist propaganda against their group by televising the truth about their practice. Subsequently, police raids and crackdowns sweep Changchun (the titular Eternal Spring), which forces Daoxing to flee. Years later, Daoxing retraces his steps by interviewing the surviving members who had managed to escape from China, while trying to recreate the events through his art and animation by relying on collective memories. 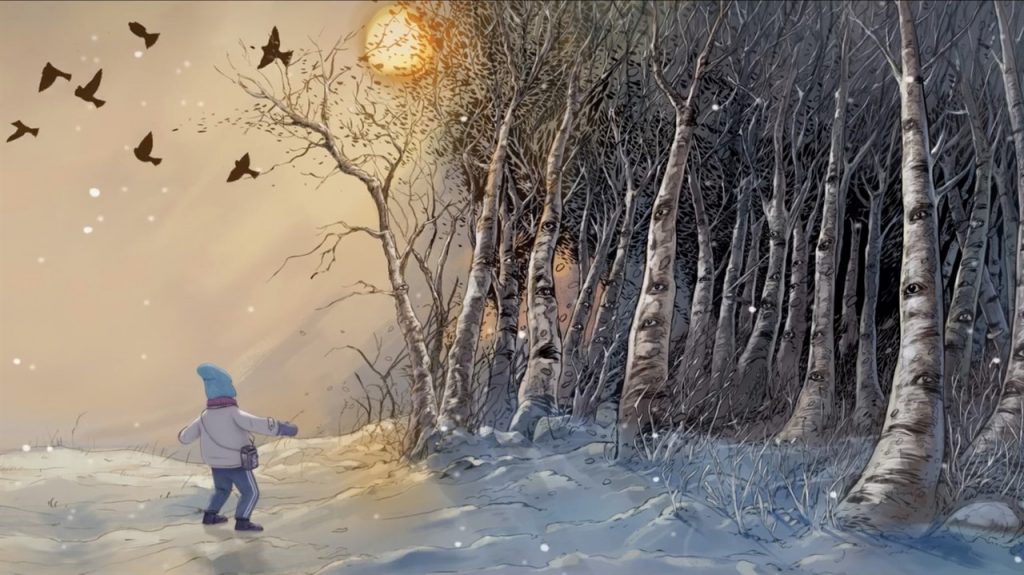 The first 10 minutes open with an overhead shot of Daoxing, drawing the horizon of Changchun City. The camera then pans down and enters through the page, whereby the art comes to life with a mixture of 3D models interspersed with Daoxing’s hand-drawn animation. The camera goes through a dynamic long take showing the police hunting down the members of the Falun Gong after the TV station has been hijacked. These 10 minutes are breathtaking and set too high a bar for the rest of the movie to meet.

The documentary plays out in a non-linear fashion, with the players of the narrative getting introduced as Daoxing meets with these people and interviews them, and while they are recounting those incidents, draws them to showcase a form of re-enactment, maintaining a balance of realism and artistic liberty. In the moments when Daoxing and “Mr White” (one of the survivors) work in tandem, White provides the appropriate context and the narrative of the story, while Daoxing provides the visuals, and the movie shines.

A mix of comic book panel artwork, and also impressionistic imagery recounting the absolute horrors of the torture and psychological abuse recounted, these moments serve as climactic incidents in a narrative resembling a heist story. From the recruitment of all the players to the planning, the training montage (here shown by the people training to climb onto the poles, and learning to cut the wires to bypass the coverage of the TV station) The animated re-enactment also gives new dimensions to the violent acts suffered by the members who were captured by the CCP. The events of persecution and harrowing brutality are shown via a fresh set of perspectives reconstructed from collective memories and first-hand accounts.

All of these give rise to a story of a sect of people standing up against an authoritarian force in the hopes of regaining their religious freedom to practise their faith. The construction of said documentary via its premise leaves little room for other viewpoints. All of the other members are ex-Falun Gong practitioners. There is existing archival footage and photographs of all these members in the narrative, to whom we are introduced to animation. However, the main tenet of a documentary is to impart knowledge, or at the bare minimum, pique your curiosity.

A cursory glance and research at Falun Gong would reveal a far shadier picture prone to valid criticism (related to their extensions like The Epoch Times and its alt-right leanings, also its viewpoints against homosexual relationships), which is surreptitiously absent here. This thus invalidates Eternal Spring’s being a balanced documentary and forces a viewer to wonder about the angle of the documentary’s existence.

But looking through that extremely also diminishes the absolutely strong work being done here in terms of storytelling and especially artwork and animation. Daoxing has been a comic book artist for DC Comics, and this feels like a personal passion project for him. The moments where he draws the birch trees with eyes, or the little moments of the kids reading comic books and the events of the page shaping up like a smoky holographic projection, are beautiful aesthetic visuals, hearkening to a strong personal core in the vision of the storytelling.

The movie jumps back and forth between the traditional interview structure of the real world and the animated re-enactments, and that causes a pacing issue. However, the emotional quotient of this movie cannot be ignored, nor should it be, because the battle against religious persecution by a dictatorial government has been a common event throughout history and still exists even to this day. At the end of the day, this is still an inspiring story of a small group of rebels standing up against a large, dare I say, “empire,” and should be seen for the animation alone.