Home»Reviews»Fifty Years of The Good, the Bad, and the Ugly
Reviews

Fifty Years of The Good, the Bad, and the Ugly 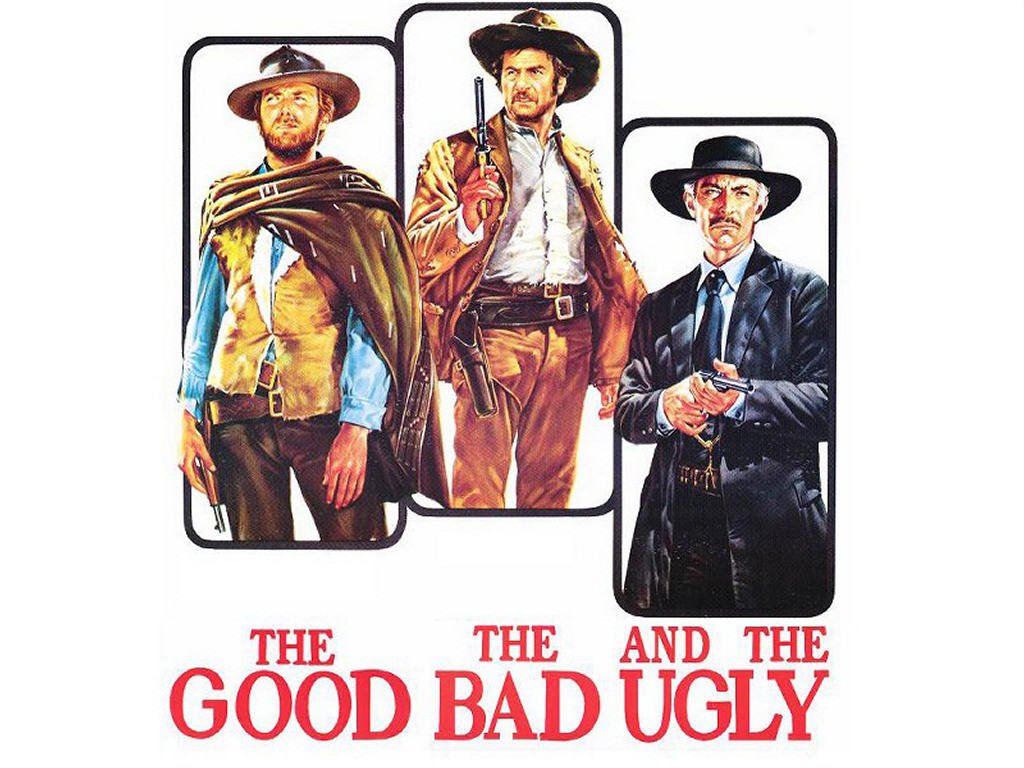 The mention of the word ‘spaghetti western’ immediately makes us think of the name The Good, the Bad, and the Ugly (1966) and the visual of complex anti-heroes spreading out around the circular arena of a huge graveyard. Fifty years back, when the film released popular press found it amusing, but also dubbed it as ‘meaningless’. Today, this sun-baked western masterpiece with a trio of mystifying drifters happens to be in a countless number of ‘best of cinema’ lists. The groundbreaking narrative technique, which was rejected as an empty exercise in style during its release, is referenced by many great film-makers (Mr. Tarantino calls it ‘the greatest achievement in the history of cinema’). It bestowed a fresh set of visual vocabulary. Even those who aren’t big fans of the Western genre continue to champion Mr. Sergio Leone as one of the greatest film-makers. His popularity among Western genre fans even overshadows the masterful works of John Ford. Ennio Morricone’s iconic soundtrack lifted the visual moments to incredible levels.

The Good, The Bad, and the Ugly was the third and most ambitious part (made on a budge of $1.2 million) of Leone’s ‘Dollars Trilogy’. Clint Eastwood reprises the role of opportunist cow-boy hero character ‘the man with no name’. Although he represents ‘the good’ in the title, he is as trigger-happy and greedy as other characters with different adjectives. According to Mr. Leone, Clint Eastwood felt that his character would be upstaged in the end product by Tuco, the Ugly. He was absolutely right. Eli Wallach’s Ugly happens to be the anchor point for the narrative, a man who acts out of animal immediacy. He neither has the robotic professionalism of the Lee Van Cleef’s bad nor the serene, aloof posture of the good. As the adjective suggests, Tuco is a coarse individual (physically and mentally), but at the same time, he is the most vibrant and ambiguous character in the movie.

After ‘For a Few Dollars More’, director Sergio Leone looked forward to make another adventure film set in the war times. But, unlike his counterparts who chose the Mexican Revolution (in the 1910s), Leone was interested in the American civil war era (the movie is set in 1862). Like the previous efforts, his characters weren’t altruist western heroes. They were only concerned with their own destiny and did everything to survive in the wartime. In fact, The Good, the Bad, and the Ugly use the dangerous situations of battle to their own advantage. The story by Leone and Luciano Vincenzoni follows three gunmen in civil war-torn New Mexico region, who are all in search of gold buried in a graveyard. Leone uses the simple story line to comment on the absurdity of war. Although this film is considered to be a light-hearted western fare, there are quite a few poignant and nightmarish images of war. The way these three men, with dubious morality, use wartime to further their claim for gold make up for a deep thought-provoking central core. Sergio Leone uses distinct cinematic vocabulary to visualize the fluctuations during the brutal war (Tuco quips, ‘I have never seen so many men wasted so badly’). Throughout the narrative, the chaotic & absurd war keeps these men alive; but will their ecstatic search for gold do the same? It all ends up with a magnificent Mexican-standoff as the three men get ready to shoot it out in the epicenter of huge cemetery aptly named ‘Sadhill’.

Here are my five favorite sequences from this electrifying masterpiece:

The loud march and a brief moment of silence 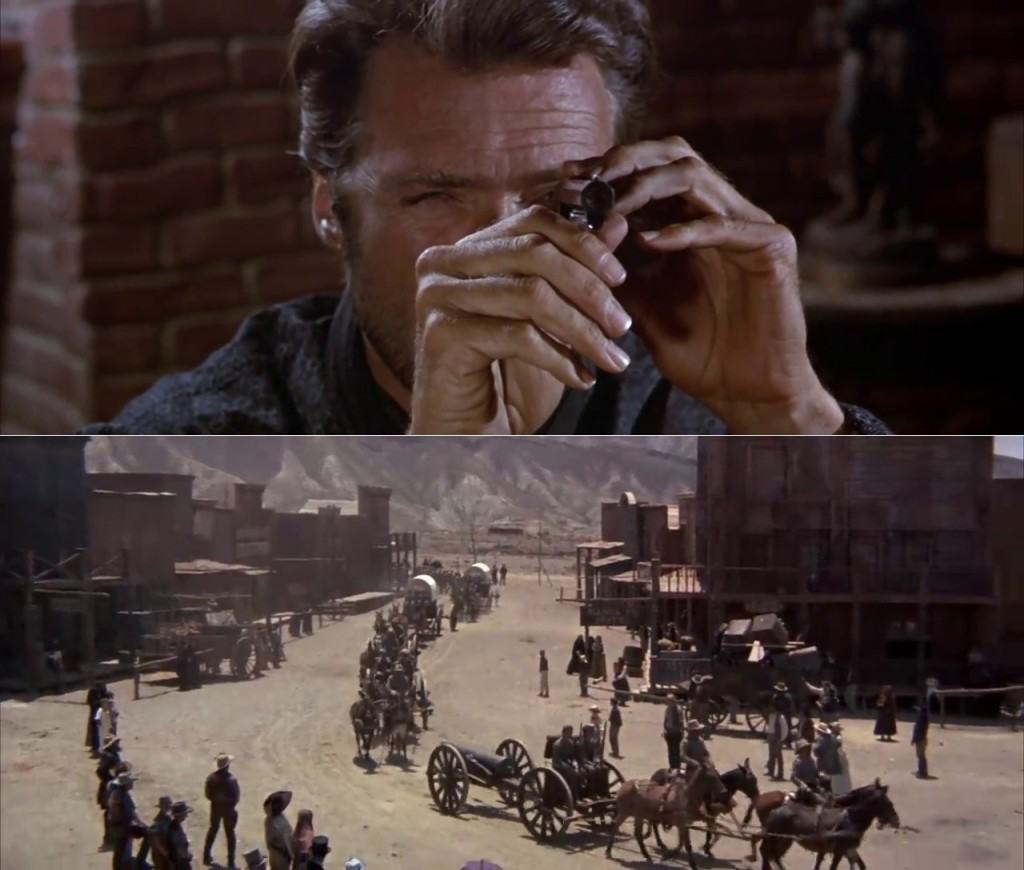 When Blondie abandons Tuco penniless, in the middle of a desert, Tuco gathers his men and plans for revenge. Blondie stays at a hotel in a town that’s being abandoned by the Confederate troops. Blondie is cleaning his gun, sitting inside the room, as Tuco’s men slowly creeps through the stairs. The sound of troops marching in the town streets overlaps the footsteps of the men approaching Blondie’s room. A brief halt of the troops pervades a silence, which enables the acute senses of Blondie to adjudge the impending attack. On paper, this might seem like a very mundane shootout scene. But, once again by blending the non-activity with frenetic action, Leone brings immense atmospheric tension. The sequence closes with Tuco’s efforts to hang Blondie from the room’s beam. A mortar shell falls out of nowhere into the room, saving Blondie’s life. This sequence once again showcases the absurd irony of war saving lives.

The screams and the overlapping music 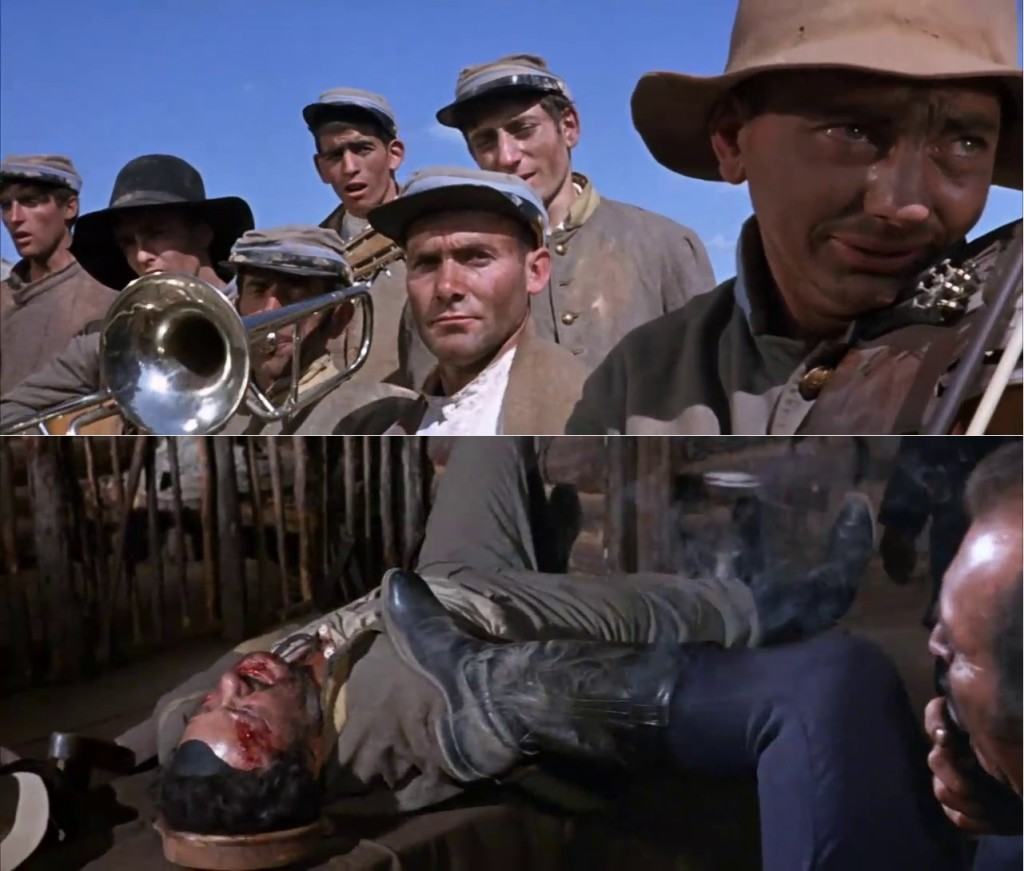 Blondie and Tuco pay the price of disguising themselves as Confederates in the territory actually held by Union soldiers. They are sent to fictional Betterville prison camp. Tuco is tortured in the camp by Angel Eyes to extract information about the hidden treasure. Before the torture scene, Angel Eyes refers to the real ‘Andersonville’ prison camp run by Confederates, which caused at least 13,000 deaths. Leone’s set up of the prison-camp locale is also a criticism on the fascist death camps run by the Nazis. When Tuco is tortured in the cabin, a group of battered prisoners are forced to play music, in order to quell the screams. This was seen as obvious reference to Nazi Concentration camps. And, by making the prison camp to be governed by Union Soldiers, Leone tries to insist upon his distrust on the history often written by the winners.  This is the most hard-hitting sequence of the film, boasting none of the dark humor we come across in other gloomy scenes.

Throughout the movie, Leone shows the impact of war on this parched territory. In Tuco and Blondie’s march through the desert, there’s detailed look at the catastrophic effects of the war. But, it is only in the ‘Langstone Bridge Sequence’ Leone gets closer to the horrors of war. The Good and the Ugly watch Union and Confederate forces’ suicidal confrontation on the bridge with an indifferent and acerbic attitude. Earlier in the scene, the drunken Union Captain dreams about blowing the bridge. During the battle, the captain gets wounded. Blondie and Tuco make the captain’s dream come true. But the dark humor is that they are doing it for entirely different, selfish reasons (the bridge was mistakenly blown the first time when no cameras were running; so the bridge was rebuilt and successfully shot). The whole sequence is a masterclass in visualizing the chaos and absurdity of war. The moral issues examined in the sequence makes it feel like a little, lyrical movie within the bigger one. 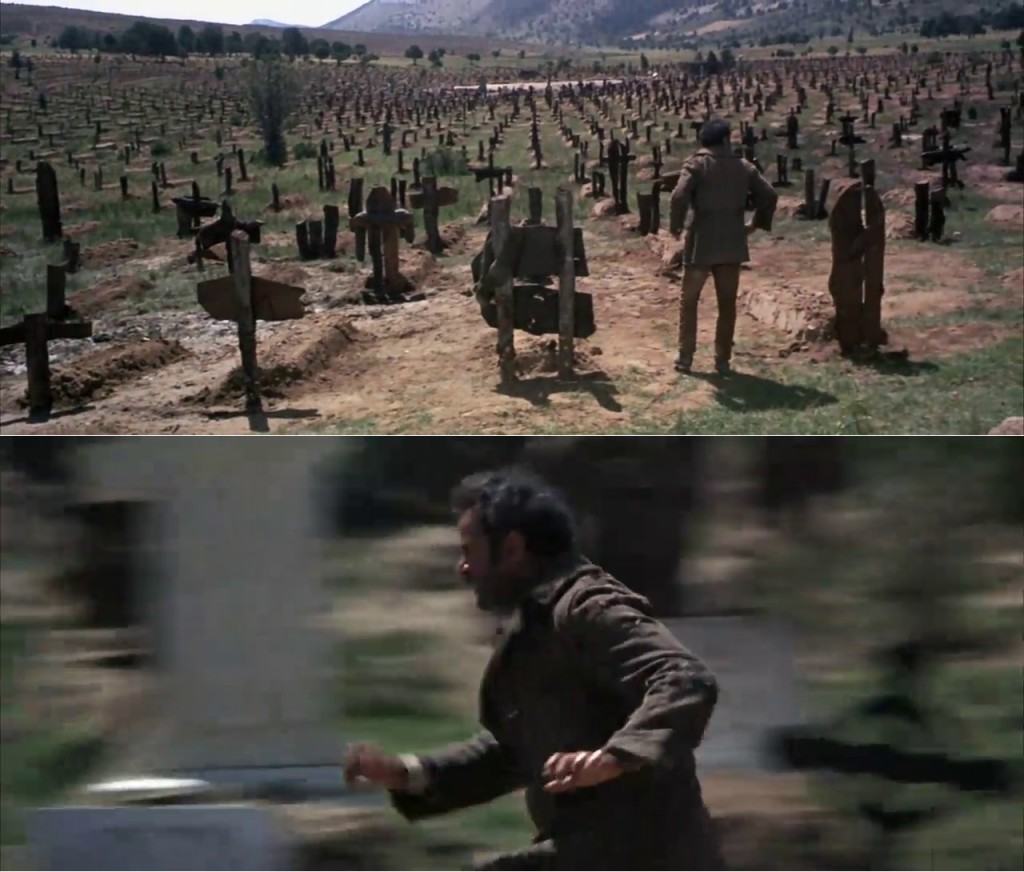 Sergio Leone is kind of obsessed with circles. Before the wondrous circle we witness in the standoff, we get to see the rapidly rotating circular shot, set in the same Sad Hill cemetery. The amazingly epic score of Ennio Morricone (called as ‘ecstasy of gold’) commences with Eli Wallach’s Tuco stumbling on to the vast cemetery, which stretches toward the horizon. We get a look at Tuco’s greedy, ecstatic eyes as he runs round & round in circles, searching for a name among the rows of grave stones. This is what legendary cinematographer Tonino Delli Colli had to say on how they made this scene: “When we filmed Eli Wallach running around the cemetery, I had the idea that in order to cut the close-up and the long shot together, I’d put a pole on the tripod and put a camera at each end of it – at one end a camera with a 25mm lens and at the other a camera with a 75mm lens. The cameras turned together, so if the actor was framed with the 75mm lens, the 25mm lens would automatically be better for editing as well. In this way, we made a lot of circles all at the same time, while Eli Wallach did a lot of running”.

If we list out ten movies that revolutionized film editing, Sergio Leone’s movies would be up there alongside the works of Sergei Eisenstein and Alfred Hitchcock. And, if we need to pin-point a single sequence that stands as testament to the film-maker’s crowning achievement, then it should be climactic shoot-down in The Good, the Bad, and the Ugly. Mr. Max Tohline in an eye-opening video essay titled ‘The Art of Editing’ dissects the mathematical visual patterns, the thought induced through arrangement of shots, and majestic musical rhythm. The brilliance of this scene first lies in choosing the perfect circular arena. The three characters are surrounded by the same background (marked by graves), which adds a lot to the complex buildup of images. The outcome of the action that unfurls in the sequence could be judged through two bookended establishing shots. But, according to Mr. Tohline, Leone has used 65 shots for that two-and-half face-off scene, building the crescendo by every passing second. This sequence is still able to extract that spine-tingling feeling. The fierce energy Sergio Leone diffuses in the showdown is also one of the best sequences ever in cinema.

Of course, there are string of other exciting sequences in The Good, the Bad, and the Ugly (for example, the shootout in ghost-town or the character introduction sequences) which still burns up with fierce intensity. Nowadays, the word ‘masterpiece’ is thrown around lightly. The sin of freely using that adjective could be understood better after watching Sergio Leone’s milestone spaghetti western.

Fifty Years of The Good, the Bad, and the Ugly