These are the word of James Baldwin – an author, a speaker, a philosopher, who was openly gay at the time when very few dared to be so. Besides his enormous contribution to the civil rights movement, his literature helped to shape the gay liberation movement. So the quote made complete sense with the naive optimism from ‘Pride’, since being hopeful was their only choice and thus, their conscious decision. The film, which takes place in Britain and explains the incidents related to the queer activists, goes on to share the universality of such sentiment.

During the ruling of Thatcher, there were many groups within the society that she wasn’t so keen about. As one of the snippets from the film shows, she says how she is in power ‘not to become a softie’ and has to take tough decisions in order to govern. During that time, several workers who did not believe in the unjust way that she treated them, decided to take their anger and dissent out in the form of strikes. However, they were not the only group mistreated by the existing governance.

The government, just like the majority of the population back then, wasn’t accepting towards the queer communities. They had their own share of resentment which inadvertently made them stronger as a community within themselves. And when they heard about the treatment of mine workers, it appeared like a clear opportunity as taking a step forward in solidarity. ‘Pride’ shares the real-life narrative of lesbian and gay activists at the time that helped in British miners’ strike from 1984 by raising money. The LGSM group, led by gay activist Mark Ashton, takes forward this alliance which is also termed as – Lesbians and Gays Support the miners. 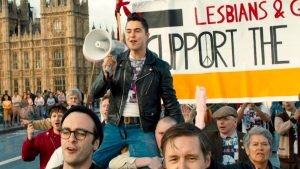 Throughout the film, we follow the narrative of a fictional character named Joe Cooper (George MacKay), who is yet to come in terms with his conservative parents regarding his sexuality. Through his journey of finding a community and a family where he is wholeheartedly accepted regardless of that, Pride introduces a personal angle in the actual happenings from the 80’s England. And as a step towards the aforementioned solidarity, the group that he becomes a part of chooses to mingle with a community of mineworkers from a small town from England.

Having had a musical theater background, it is no wonder that director Matthew Warchus’s film feels extremely energetic and wholesome. Pride does come with its share of cliches as a result of that and the formulaic narrative is also evident, which leads in predictable turn of events. But, is unpredictability really a factor to ponder over for a film that is trying nothing more than celebrating their rigorous spirit? I believe not. The conflict of the mineworkers between their inner conservatism towards queer people and the dire need of support at the time – is handled with enough care to not let the familiar beats lose the film’s soul and rhythm.

Pride is filled with warm, fuzzy, empathetic, and gratifying moments and finds a great balance in creating a crowd-pleasing entertainer without losing its humanity. And it is satisfying to cheer for openness towards marginalized communities than the optimism sold for the capitalistic ambitions. So every bit of overwhelming Pride feels genuinely justified.  Be it Dominic West’s hypnotic dance moves or Andrew Scott’s reserved character of a Welshman, almost every performance expresses their characters to the fullest – just like the film’s joyous and colorful production design.