Powerful waves strike a small boat approaching the magnificent rocky coast, northwestern France. Among the crowd of men sitting in silence is a girl with dark hair, a firm attitude and slightly masculine features. In one of the powerful water raids, a crate falls off the barge, behind which the lady jumps heedlessly. What she is trying to save from the dark depths of water are three blank canvases. With this scene, Céline Sciamma introduces us to her fourth feature film Portrait of a Lady on Fire.

The director of Water Lilies, Tomboy and Girlhood brings us another feminist, LGBT drama, this time set at the end of the 18th century. However, unlike previous works, in which the representation of contemporary French society played a central role, with slightly subtle and underdeveloped political messages, the new film of this multi-award-winning author focuses on the analysis, representation, and questioning of general, temporal, spatial and politically indifferent femininity.

The turbulent lives of the aristocracy

Portrait of a Lady on Fire follows Marianne (Noémie Merlant), a daring painter, who takes on the job of creating a wedding portrait of Lady Héloïse (Adèle Haenel). As Héloïse opposes marriage and has succeeded in the madness of a single painter, Marianne has to play the lady’s maid so that she can observe her model by day and secretly paint her portrait at night. The two women, on the rocky shore of Bretagne, begin to discover the melancholy and difficulty of living the other in the rare moments of their freedom.

The power of Céline Sciamma’s new film lies in the extraordinary characters and their interaction. In the main narrative, these are certainly Héloïse, who plays a traditional social role, women whose fate is determined and is expected to reconcile with that fate sooner or later, and Marianne, an invisible and insignificant artist whose works will never become famous, but yet her love for the craft is one that goes beyond the need for fame and proof.

Portrait of a Lady on Fire inverts the stereotypical role of the muse as well as the role of the artist and places the two protagonists in the intriguing relationship of coping with social roles and the need for their deconstruction.

The intimate fate of women

By placing Marianne and Héloïse in a secret observer/secret observed relation, Sciamma builds an emotional and psychological charge between the protagonists. However, what elevates these characters, and therefore the narrative and the overall film, to a higher level, is precisely the director’s decision that both characters are in both relationships at the same time, they are both observers and observed. 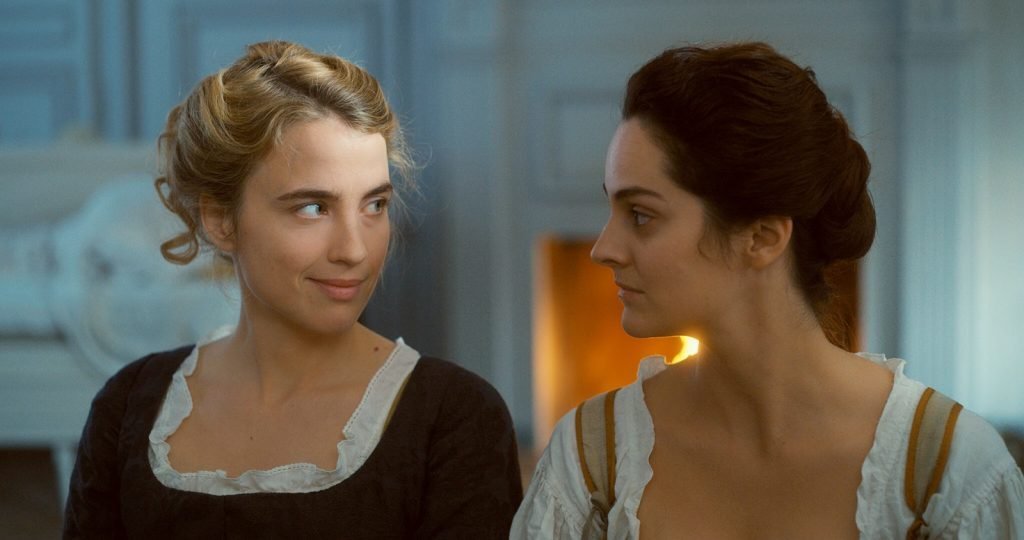 The film doesn’t, however, neglect the supporting characters, so the narratives of the maid Sophie (Luàna Bajrami) and the countess (Valeria Golino) are developed to portray several more perspectives / social roles of women from the late 19th century. So a “notorious” Countess, during her conversations with Marianne, gradually opens up to show that she accepted her social role (whether she liked it or not) and that she truly wishes only the best for her daughter, given the context of space and time. When it comes to Sophie, her unwanted pregnancy and the way she handles it is purely empowering, and it plays a crucial role in opening intimacy among other characters.

About painting canvases, plot twists and colors of emotions

Director Sciamma uses three canvases from the opening minutes of the film as three major points of development and turning points in her film. Working on each canvas brings with it certain emotions, a certain degree of intimacy and a specific visual identity of the film through the selection of colours, lighting and, to a large extent, through the locations where the characters are located.

Although the film does not directly refer to some specific historical figures, more experienced art connoisseurs will be able to identify the range of painters and painters Sciamma was inspired by for her film. Narratively, Sciamma takes inspiration from the life of Rose Bonheur or Marie Bracquemond, while with the painting style of the protagonist Marianne, the obvious inspiration is certainly Berthe Morisot.

When it comes to visual inspiration, Claude Monet and his works on the Brittany shore (Woman with a Parsol, The Cliff Walk at Pourville, The Cliff, The Beach And The Falaise D) are translated into film frames, as are several works by painter Mary Cassatt (Five O’Clock Tea, The Lodge, In the Lodge).

What intrigues the most about the movie is the approach to the historical drama genre itself. With its focus on building relationships between characters, Sciamma manages to elevate the story from the clichéd misogynistic environment of similar films that fail the Bechtel test with impeccable ease. Thus, the protagonists are not dependent on male characters and do not spend every moment of their existence on film to obsess and depend on men. There are also dresses that give the film a historical affiliation with the period but do not occupy the attention and carry no additional role in the lives of the character.

All in all, Portrait of a Lady on Fire is an unusual, invigorating love drama about art and freedom, filled with deep emotions and intriguing references to the works of impressionist and painter painters. The film has won the Best Screenplay and Queer Palm Award at this year’s Cannes Film Festival.

Portrait of a Lady on Fire Trailer:

Portrait of a Lady on Fire Links: IMDb, Wikipedia