It was recently the 20th anniversary of Fight Club and what better way to celebrate this classic film than to shit all on it. Since its release and slow accumulation of cult recognition before entering the mainstream, Fight Club (1999) has been regarded as one of the most probing and clever introspections into masculinity, in particular the catharsis of consensual violence. But as the film remains the same, the culture surrounding it changes again and again, and now it seems critics are dismissing just like critics did when it was first released in 1999.

Retrospectives like these that criticize the lack of depth in its anti-consumerist message seem ironic because these critics themselves don’t go deep enough. Is Fight Club a critique of consumerism, or a critique of anti-consumerists? Given how much the film evolves as it plays, it seems there are more layers to it than so-called critics give it credit for, even two decades later.

Goldberg is also wrong when he claims Tyler offers no emotional support, even though Tyler represents in more than a handful of scenes a pair of ears for the Narrator’s woes, and does at least try to make him feel better (though by convincing him to replace his anxieties and despair with nihilism). Isn’t this supposed to be the antidote for depression in men, to be more emotionally open in conversations as they try to discover their identity? 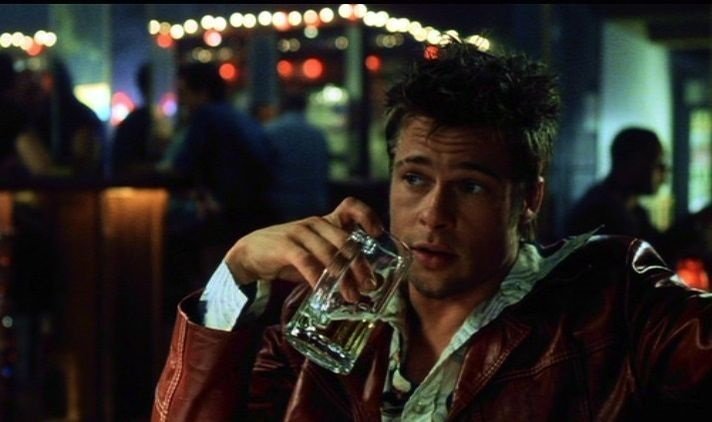 But the hot (flaming pile of garbage) takes gets a whole lot dumber and misrepresentative from here. Matt Miller of Esquire simply views the film as a mere anti-consumerist film in his stupidly titled “Have We Finally Grown Out of Thinking Fight Club Is a Good Movie?”, not getting the satire and only reflecting on the film’s surface. Critiquing on Project Mayhem’s comical terrorist-esque vandalism, he claims “It’s all meaningless, pointless garbage masquerading as enlightenment in modern America” – yeah, that’s the point. Tyler’s allure of nihilistic wisdom soon transforms into vengeful and empty anarchy, which is when he turns into the villain that the Narrator is trying then to take down.

The irony in Miller saying “The problem is that this type of glorified anarchism was misunderstood by Americans who didn’t want to think any deeper” is that he (and, to varying degrees, the other critics I’m shitting on here) don’t get deep themselves with understanding the satire that evolves through the film – Miller’s claim that it “spoon-feeds easy soundbites that sound like wisdom about our sanitized society, but ends up saying nothing at all” makes it sound like he’s missed the irony of Tyler’s dehumanizing quotes that end up luring disenfranchised men away from their corporate jobs … into new kinds of corporate jobs at Project Mayhem.

Even moving away from the film’s main satirical message, Miller brings up other points with no substance. One critique is “Fight Club is also, most noticeably, miserable to look at,” as if films about cultural ugliness must actually be pretty themselves. He also blurts out that “It’s a film guilty of horrible misogyny” and doesn’t substantiate it at all. I don’t recall general “I hate women” comments from any characters or any violence against women, but conversely Marla is actually saved from a suicide attempt by Tyler, and there’s even one of the film’s only genuinely tender scenes, the Narrator feels her breasts for a possible lump, showing him with zero sexual pursuit. Miller concludes his cobbled-together rant with “So, perhaps it’s best to leave Fight Club back in 1999. We’ve matured as individuals, as a society (hopefully)”. No, thanks, I think Fight Club is such a startling resonating film, it’ll wield a different, but an equal amount of power in each new generation.

One article from Esquire wasn’t enough, with a quick article from Jonathan Evans “Brad Pitt’s Fight Club Jacket Was the Movie’s Only Redeemable Character” who seemed to agree with Miller’s surface-level assessment of the film that its “deeply problematic message” was the message that film was satirizing. How can writers who work for (what was once) such a prestigious publication judge a film like this as if they only watched half of it? 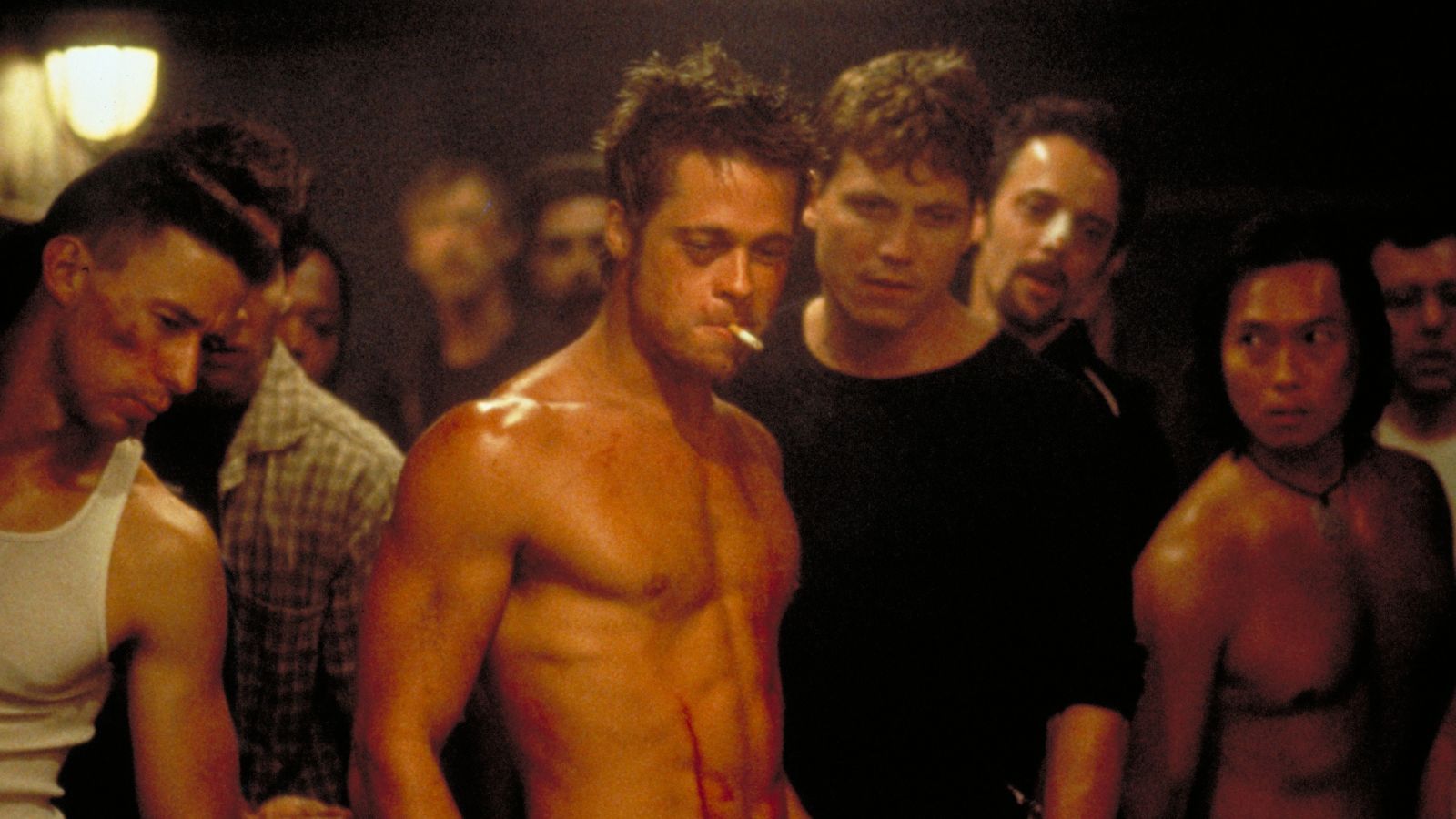 As it goes with journalists, films not about race are now about race. Vice’s Lavinia Lang calls the rage in the film specifically “white male anger,” despite the image just above it showing at least two men of color at the fight club. To be fair to her article, “In Defence of Fight Club”, she at least seems to understand the kind of violent fighting in it (“There is something strangely satisfying about seeing men take out their rage […] all while demonstrating the self-destructive nature of their violence”) and gets the satire (“Fight Club is satirical, and it’s cynical even of its own cynicism, a quality that leaves the film’s own political compass somewhat open to interpretation […] highlighting the idiocy of its characters and their actions and offering a counter-narrative to a reading of the film as simply “cool.””). But then she ultimately garbles her female perspective of the film with your usual ‘battle of the sexes’ bullshit that insists women have it worse than men (“the sources of their angst pale in comparison with the unequal pay, sexual violence, and general double standards that women grapple with all their lives”).

These journalists try to relate the toxic behavior of the film to groups nowadays such as white supremacists, the alt-right, men’s rights activists, and the press’ current favorite boogeymen,  incels. But the nihilistic lashing out that Project Mayhem engages in is seen in many groups of people in the world, whether they’re male dominated or not – terrorist attacks, mass shootings, gang warfare, and violent uncivil rioting are all indicators of people lashing out at a system they feel has repressed them. This is a behavior that transcends race, class, sexual orientation, and, though it’s mostly men in these circumstances, gender – though it’s handy to attribute any toxic behavior in a film like this and link it selectively and exclusively to only the groups you hate.

I now propose a new meaning to describe these ass-backward journalists who either purposefully misinterpret our culture and entertainment or really can’t look far into them due to their narrow prism: toxic journalism (I’m throwing their much-used adjective back at them). Film criticism is rife with this, viewing the complexities of the human experience as reflected in the films in a highly compartmentalized manner, boxing this character and that character into isolated categories with no overlaps. This doesn’t even work for blockbuster films with easily recognizable heroes and villains, let alone highly introspective films featuring confused, contradictory, and emotionally experimental characters like Fight Club. These unenlightened, amateur critics ought to adhere to the first two rules of fight club.

The Irishman (2019): MAMI Review - Scorsese's Return to the Crime Genre is an Epic Cinematic Experience