Based on Charles Brandt’s 2004 memoir titled ‘I Heard you paint houses’, The Irishman (2019) is a biopic about the life of Frank Sheeran and his involvement with Russell Bufalino of the Bufalino crime family. We also get a look at his equations with Teamsters Union leader Jimmy Hoffa. The film touches upon a mystery in the disappearance of the Union leader.

We had unseasonal rainfall in Mumbai and moviegoers were stuck without rain gear. Yet they weren’t deterred as they stood in huge queues outside the venue amidst a drizzle. The excitement was in the air and there was a buzz amongst the waiting crowd. Perspiration and raindrops covered almost everyone but they didn’t mind it. In a few short minutes, they would enter and witness the legendary director Martin Scorsese’s return to the gangster drama with ‘The Irishman.’

At the 2012 Academy Awards, host Billy Crystal performed a number based on all the nominated films of that night. When introducing Scorsese’s 2011 film Hugo, Crystal urged Marty not to be so arty and shoot a character in bed because he’s Marty. Safe to say Scorsese listened to Crystal as after years of staying far away from crime dramas he entered his yard again. He decided to ditch his latest frequent collaborator in Leonardo DiCaprio and reunite with his partners in crime in Robert De Niro and Joe Pesci.

This film has Scorsese working with a script about the mob, organized crime, people blowing people’s heads off, ‘painting houses’, even doing carpentry as one character replies when asked if he paints houses, and doing other sorts of Scorsese stuff. In addition to the expected (all of the above) we get an unexpected and wonderful look at the effects of such a life and how in killing others, you end up killing your conscience and your relationships with family resulting in an isolated and detached emotionless wreck.

Related to The Irishman (2019): Casino is better than Goodfellas

The Irishman is the ninth film having Scorsese direct De Niro, the seventh film in which the leads De Niro and Joe Pesci have worked together. It is the fourth film featuring both Pacino and De Niro. A few firsts occur in this film too as The Irishman (2019) marks the maiden collaboration between Pacino and Pesci and it is the first time Scorsese directs Pacino.

This film opens with the camera slowly moving through a corridor of what looks like a home for the aged/hospital before turning and focusing on an old man in a chair. This is Frank “The Irishman” Sheeran (Robert De Niro) speaking presumably to the audience. His words eventually become a voiceover and we learn that he is narrating his life story to the audience. Frank’s character arc is impressive. It showcases the nature of a human being and how his equations with others are driven by the type of man he chooses to be.

Joe Pesci plays crime boss Russell Bufalino. He is the level headed senior man who has the respect of everyone. His calm character is quite a polar opposite of the performance he gave in his Academy Award-winning turn in Goodfellas. Frank rises from truck driver to a mob man who is given the task of babysitting (observing/keeping in check) Jimmy Hoffa (a digitally de-aged Al Pacino). 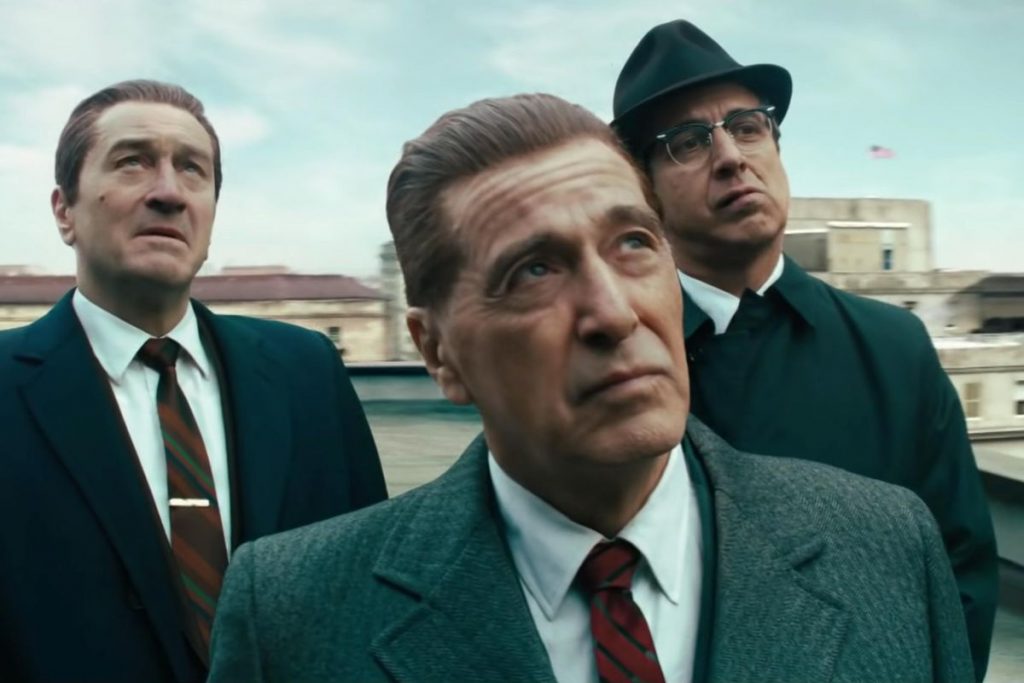 As Hoffa, Pacino is an extroverted union leader who is scornful at the idea of not wearing suits for a meeting, wherever in the world it may be held. And in a highly entertaining discussion at this meeting, he even debates whether it all right to be 10 minutes or 15 minutes late for a meeting. His look reminded me of ‘The Scent of a Woman’, but mercifully despite having a hectoring speech needed to win over the members of the union, he doesn’t talk (shout) in this film.

Bufalino and Sheeran are on a road trip with their wives when they catch sight of a particular structure and within seconds they are transformed into spring chickens. De Niro looks like how he did in the 90s and Pesci is a mirror image of Tommy DeVito from Goodfellas and perhaps Harry from Home Alone 1 & 2.

This technology is astounding as it permitted Scorsese to cast the same actors in 3 different stages and not have either liberal amounts of makeup applied or casting another actor in the same role for eg. so and so as Frank Sheeran in the ’50s. This technology was the reason that the film’s budget ballooned up and was similar to that of franchise films.

In Scorsese’s words, this was a huge experiment and based on audience reactions and just looking at the results, it seemed to work. When the lead trio appeared on screen for the first time there were huge cheers. These cheers intensified as we saw them in their VFX de-aged selves. This technology is here to stay.

Also premiered at MAMI: The Lighthouse (2019): Unnerving and Creepy

A common thing about mob dramas is that they all have men who keep the business and family separate. The family is often unaware of or turns a blind eye towards these actions. The Irishman breaks that rule. Sheeran’s rise as a mobster sees him viciously pummel a man who accidentally shoved his daughter. This causes that little girl to fear him.

The equation between Frank and daughter Peggy is built upon as an invisible wall forms between the two of them. There is an apprehensive terror in the eyes of the Young Peggy (Lucy Gallina) and a sense of knowing and inherent disbelief on the face of the older Peggy (Anna Paquin) as she watches her father show no remorse and listen to a report of a kill he has orchestrated. He has such a straight face whilst doing so which only confirms his guilt in Peggy’s eyes.  Later on, Sheeran is told that his daughters lost a pillar of support as the girls were scared about approaching him with a problem as they wouldn’t know how he would react.

We get a few monologues on the psychology of a hitman before entering a place and shooting. There is also a fine monologue about the usage of a gun. These are mesmerizing to listen to. Like all mob films, there are some fine nicknames and the oft used name in such films ‘Tony’ gets an upgrade. In Eraser (1996), it was Tony Two Toes and in The Irishman, it was Tony Three Fingers. So creative. 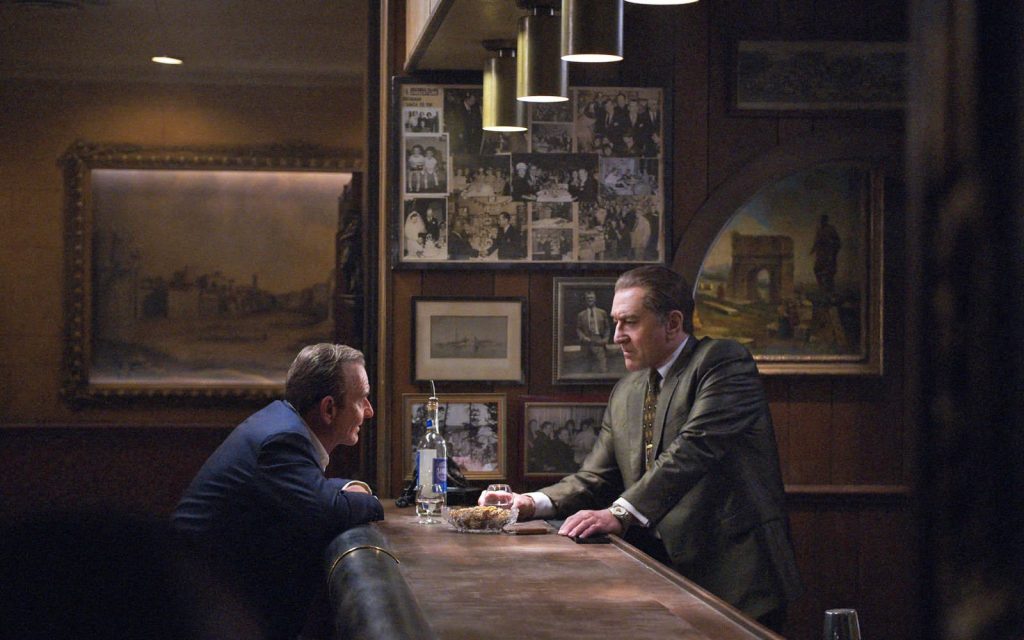 This film is a nostalgia evolving vehicle with Marty and his boys returning this film. But it doesn’t rely purely on the emotion and manages to pull its weight.

Scorsese’s studio backed out after the debacle of ‘The Silence.’ After watching this film, I felt that that was a good thing as Netflix stepped in to rescue the film along with giving him complete creative control. He plays with the audience and gives them scenes of mob whacking akin to what we have come to expect from content coming from this director in this genre.

We get a look at the side effects of such a life which mirrors Scorsese’s idea of cinema being the conveying of human, emotional and psychological experiences. The Irishman is a tale of two Scorsese’s i.e.

Violence, guns, killing, cuss words are all very much a part of this film.

At the same time, we see that crime does not pay but the criminal pays an eternal personal price.

The last hour and more so the last half hour is devoted purely to this. That last hour feels long. Perhaps it is a protest from our body and being made to stay seated in one place for so long.

At 210 minutes it is long. Longer than any of Scorsese’s previous work. Sheeran’s history as Mob Enforcer too is long, but these despicable acts finally catch up to him and the viewer. Like we do in most films we can’t relate to what the on-screen character feels. He has told us his story and all we can do is observe him and his efforts in seeking forgiveness.

As I left the cinema hall, I appreciated the length of the huge 210-minute journey tracing one character’s life, his rise, fall and attempt at penance. The 210 minutes was worth it for The Irishman is an epic journey and a cinematic experience. It is a must-watch. Don’t worry, it’s not all so dreary and serious, there are some chuckle-inducing dry-humor scattered across this heavy script.