With Laal Kaptaan’s release, Deepak Venkatesha is coming up with the period action drama. Having worked on the script in the genres of mystery and satire, this venture is much more picturesque, vibrant and gets us excited for all the right reasons. With Navdeep Singh (NH10) being the captain of the ship, the hopes are sky high for this new release. On the same note, we spoke with the writer of Laal Kaptaan, the one from whom the idea originated and who gave birth to this extravaganza- Mr. Deepak Venkatesha.

Q. While working in the management sector, what kept you motivated to write a script? What was the thing that kept you pushing to pursue screenwriting as your profession?

A: I am from a generation where ‘films’ were a big pastime and hence an important part of my life. I come from a family that liked watching films and films have always there. The writing was a choice. I felt I had to tell my stories in Films and writing seemed the obvious way out. I did NOT like the corporate sector, hated the world, the politics and films kept me going. So writing became a path to do what I truly enjoy. The fact I could tell my story was what kept me going when working in the corporate sector. That and my lying to management whenever I had to slip out for film meetings!

Q. Did any writers influence you to work on this path? Not necessarily authors, but have any screenwriters or directors influenced your creative process or motivated you to write?

A: The influences are too many. Writers, Directors, Authors are what set me on this path and there are just too many. Paul Schrader, Aaron Sorkin, Terry Southern, Charlie Kaufman, Puttanna Kanagal, Salim Javed, Sujatha come to mind the minute you think of writing. Martin Scorsese (I call him Marty Baba in all our imaginary chats) is a big part of my film-watching life and he is someone I truly revere.

Q. The casual Indian audience is opening up to films that portray the socio-economic issues straight from the society, how much has the state of writers improved?

A: Writers have always been background players and continue to be so but film watching has changed. The audience is no longer only coming in for ‘actors’. They seek more information on writers, directors, cinematographers, editors et al. This is what has gotten more writers into the limelight. Add to this, the stellar work done by the SWA (Screenwriters Association) and writers state has definitely improved. There is still a lot that can be done but the state is much better now.

Q. How did the idea of Laal Kaptaan come to fruition? And why did you choose the setting of a ‘period drama’ for the film?

A: Navdeep was one of the first few people I met in Mumbai. I had come to know of him through a website called PFC (Passion For Cinema) and had reached out when I was not even in Mumbai. He was courteous enough to read something I sent and then had met me. We have been talking about working together for the past decade and it was many ideas that I kept throwing at him. He was also busy with other films but we kept meeting. A recurring theme was an idea of a revenge drama and a guy from nowhere. We read a lot and ‘history’ is something that interests both of us. Spaghetti westerns were a topic of interest and we realized that the time period after Buxar in Middle India was almost the Badlands of a western or even an apocalyptic Mad Max zone. The time period seemed an obvious choice and a Naga Sadhu Hero made it interesting. We had an idea that was set in a contemporary time that seemed to make better sense in a period setting. We went back and forth on it. A lot of coffee walks on Navdeep’s terrace got the story locked. It then flowed pretty naturally. 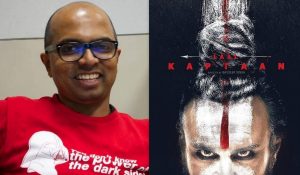 Q. With Laal Kaptaan, you are officially collaborating with Navdeep Singh for the first time. How was your experience of working with him on the script?

A: As I said before, I know Navdeep the longest in this city and we had been speaking on what we could do together. As a writer, there are directors I actively seek out. Their films, their vision is what makes me want to work with them and Navdeep was on that list from Manorama onwards. We have a lot in common through politics, reading, history and it was fun working with him on the script. We did have arguments, discussions but it was all good. As a writer, you like a challenge and this script was incredibly challenging and writing it with him was fun.

Q. And how was he as a director? He has worked with the genres of thriller and mystery before. How was the collaboration process like? Did his previous work influence while working on Laal Kaptaan?

A: My reason to seek out Navdeep was strengthened in the making of the film. Every writer wants a committed director who has a shared vision and puts his all in the film. Navdeep did a lot more than that for Laal Kaptaan and I am very proud of the final product. I do not think his earlier work had any influence specifically on Laal Kaptaan but we are an amalgamation of all our life experiences, things we see and consume. Parts of that will always be peppered around our work but nothing specifically from the earlier films influenced this one. I have written children’s films and a satire but I largely write thrillers, mystery and this was a genre I like.

Q. From the trailers of Laal Kaptaan, we see elaborate compositions serving your plot of the mystery. Do these visuals guide your narrative or is it the other way around?

A: Laal Kaptaan did have a huge impact of compositions on its narrative. The narrative is a journey and these twists, hook points were key compositions that steered the story forward. So the visual guides were very much part of the narrative from the get-go. This was a film that has not strayed a bit from the ‘screenplay’ and the final cut remains true to the writing

Q. Your films have a very specific Indian context. Be it ‘Kaun Kitne Paani Mein’ or ‘Jalpari: The Desert Mermaid’, your narratives seem to have rooted in the Indian milieu. Where does this strong connect come from?

A: I have been a nomad for most of my adult life. Lived in a lot of places but have always been rooted in India. As they say, you can take a boy out of Bangalore but you cannot take Bangalore out of the boy xD! My stories and experiences may be from across but my way of seeing it is from the ethos I come from. A political willed family, with a lot of independence and a keen interest in reading, makes you understand the polarity and diversity of India. The diversity naturally blends into storytelling and hence the strong connect.

Q. Laal Kaptaan seems to borrow themes from Indian mythology while the visual appeal seems almost like a graphic novel. How do you find that balance while writing?

A: I am addicted to comics and my nickname for a long time has been Thermo-Man. Visually, Navdeep and I sort of agreed on how this film will look. This was our ode to a Spaghetti Western, a good comic like the Walking Dead. Visually it may seem like a graphic novel but the story is really about family, identity, lost life and redemption. Laal Kaptaan has a lot from History but nowadays the lines between history and mythology have blurred and history is being rewritten as mythology!

Q. The trailers of Laal Kaptaan have arrived in three parts- The Hunt, The Chase, and The Revenge. What were your thoughts behind this? Are these the three acts from your structure or do they hold any more symbolic meaning?

DV: When we started writing the film we did have a different name. It was called “Hunter, Tracker, The Widow, and the Hanging Tree”. We had thought of it as a Trilogy but the 3 parts of the trailer are more marketing than the writing. You will know on Friday if it does have any symbolic meaning!

Laal Kaptaan is set to release on the 18th of October in the cinema-halls near you.

In the Shadow of the Moon Netflix (2019) Review: Jim Mickle's Weakest

Interview with Achal Mishra : “I was not just documenting our house, but also a culture which is slowly eroding.”