“Kenji Misumi’s The Tale of Zatoichi (‘Zatoichi monogatari’, 1962), the first film in the series isn’t an origin story but befittingly establishes the eponymous character.”

Zatoichi, a blind swordsman and an itinerant masseur from the late Edo period (1830s or 1840s), is a popular fictional character created by the pulp novelist Shimozawa Kan. Screenwriter Minoru Inuzuka, DaiEi studio executives, and Shintaro Katsu, the actor who regularly portrayed this iconic role played a vital role in turning Zatoichi into a successful movie character, leading to twenty-five entries between the years 1962 and 1973 (the twenty-sixth Zatoichi film was made in 1989; the final appearance of Katsu in the role which he also directed). Apart from playing Zatoichi in 26 films, Shintaro Katsu appeared in a television series (in 112 episodes made in the years 1947-1979). An acclaimed reboot was made in 2003 (The Blind Swordsman: Zatoichi) with Takeshi Kitano directing and playing the titular role.

Zatoichi is essentially a thoughtful, compassionate, and non-violent man who exhibits his spectacular sword-wielding skills only when absolutely necessary. He masquerades his mastery of sword by working as a traveling masseur and seeks thrill by tricking people in the gambling games. While crooks think of taking advantage of a poor blind man, Zatoichi smartly exploits their perception to gain an upper hand in the dice games. This hustling nature of the character balances the narratives’ philosophical and emotional overtones with an earthy humor.

Being a visually-impaired vagabond, Zatoichi is shunned to the lowest rungs of the rigid Japanese feudal class system (his name is Ichi and ‘Zato’ refers to the man’s blindness). The round and soft features of Katsu, the actor who played the on-screen avatars of Zatoichi, also bestowed the character the appearance of a harmless wanderer. Of course, there’s more to Zatoichi than meets the eye. 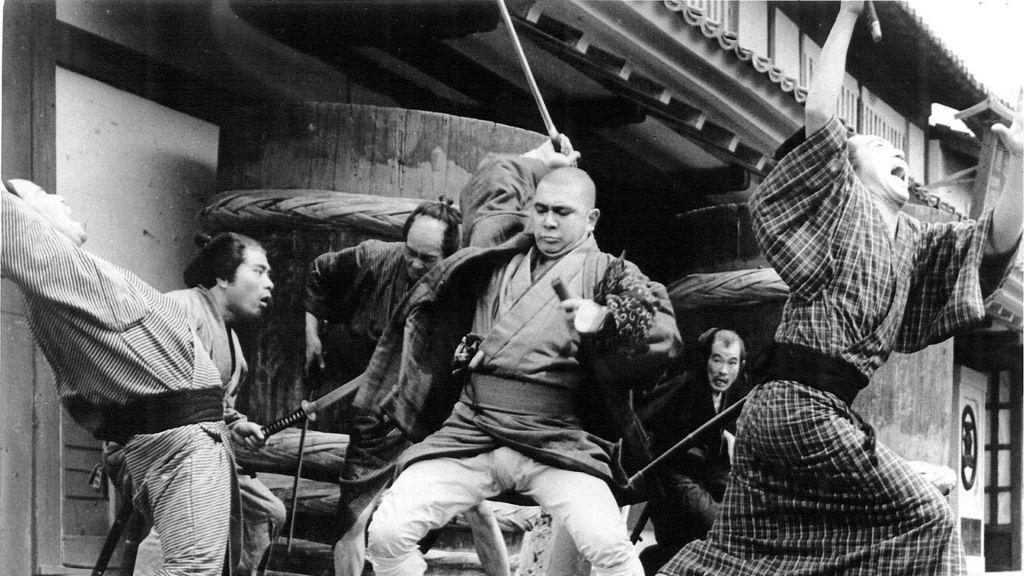 Kenji Misumi’s The Tale of Zatoichi (‘Zatoichi monogatari’, 1962), the first film in the series isn’t an origin story but befittingly establishes the eponymous character. Misumi (1921-1975) directed five more movies in the Zatoichi series and was also best known for directing the ‘Lone Wolf and Cub’ film series. In the first film, Zatoichi comes across as a brooding and dark figure, who avoids the advances of a young woman and rigorously attunes himself to the samurai code of Bushido. The narrative opens on a tranquil countryside with a blindman walking with the help of a cane. At one point, he gets on all fours to pass through a log that’s placed above a small stream. But gradually we learn the idiosyncratic qualities of the hero, including his dazzling display of swordsmanship and uncanny sensory perception.

Related to The Tale of Zatoichi (Zatôichi monogatari) : Seven Samurai [1954] — The Most Influential Film

Zatoichi arrives at the small town of Iioka to visit an acquaintance. While waiting for the man, Zatoichi finds himself among a group of noisy yakuzas who are gambling with a cup and dice. When Zatoichi approaches them for a game, they are jubilant and wait for a chance to dupe the blind guy. Zatoichi slaps down the cup, but the dice is out for everyone to see and they happily bet on the even number. He repeats the ‘mistake’ next time too, but now all those who can see are cleverly swindled. Taking their money, Zatoichi immediately walks out of the place.

The angry mob of gamblers, however, decides to send a couple of men to teach the blind guy a lesson. As the men go after Zatoichi and learn a lesson, their boss Sukegoro (Eijiro Yanagi) enters, who happens to be Zatoichi’s acquaintance. Now, Sukegoro orders his men to wash the blind man’s feet. Having witnessed Zatoichi supreme skills firsthand, the well-to-do yakuza chief, Sukegoro feels he will be a great addition in the gang’s upcoming bloody conflict with Shigezo’s (Ryuzo Shimada) clan of the nearby Sasagawa town.

Zatoichi hopes to avoid war and enjoy his brief stay. He goes fishing where he meets a consumption-afflicted samurai named Hirate (Shigeru Amachi), who was recently recruited by Shigezo. The two men strike up a friendship, although they may have to fight each other to death in the near-future. Zatoichi is saddened by the escalating conflict and he perfectly understands the futility of violence and the determination of covetous yakuza chiefs. Hirate, however, desires to catch Zatoichi’s much-talked about sword skills, and if situation demands he’s happy to die in Zatoichi’s hands than surrender himself to illness. In another emotional sub-plot, Zatoichi resists the growing affections of, O-tane (Masayo Banri), a pretty vilage girl suffering at the hands of an abusive ex-lover and a deceptive brother.

For a man who abhors violence (the treachery and corruption it represents), Zatoichi is ‘cursed’ to be perfect only in the battlefield. There’s a bit of vulnerability to the character when he brings rice cakes to his mouth or while drinking sake or when he declares himself as a worthless romantic partner – this particular scene between Zatoichi and O-tane is splendidly framed with a low-angle close-up of blindman’s face with the moon shining above him, probably indicating that the journey of his is everlastingly dark despite the light around him. But when Zatoichi is forced to rely on his heightened senses, intellect, and fighting skills, a deadly menace envelops the character.

In fact, the primary strength of the Zatoichi movies is the actor Katsu’s brilliant ability to amalgamate the drifter-hero’s conflicting characteristics: a bumbling humanist as well as a matchless swordsman. Such character traits and questions of morality elevate Zatoichi films to be more than action-packed chanbara flick. The stark black-and-white cinematography also impeccably adds to the bleak atmosphere of venality and cruelty (from the third entry, Zatoichi movies were shot in color). In recent times, Yoji Yamada’s Samurai Trilogy (2002, ’04, ’06) – based on the stories of Shuhei Fujisawa – intriguingly dealt with the agony and conflicts roiling within a skilled, amiable, and honor-bound swordsmen often pressured to commit a act of violence. There might be something fiercely cinematic in the way these epic, on-screen lone wolfs walk off down a dusty road to forever be the guardian angel of the powerless, but they sure do provide solace from the chaos of our reality.