Chhorii [2021] Review: Another Feminist-Horror Film, Lost in its Own Sugarcane Fields of Jump Scares & Bad Acting

Witches, or dayins, are the latest trend in the horror genre that Bollywood is so taken up with. They necessarily have a story to tell and a patriarchal order to dismantle; we are not complaining. However, with time, these stories are not only getting repetitive but they are also listing a set of pointers to be ticked off – a female protagonist, a rural setting, the conflict between traditions and modernity, and a fairly inconclusive ending. Chhorii, directed by Vishal Furia, which is a Hindi remake of his own Marathi horror film, Lapachhapi (2017), succumbs to the pointers and fails to create an impact, despite driving home the point it set out to make.

Chhorri is the story of Sakshi (played by Nushrratt Bharuccha), who is eight months pregnant and is forced to leave the comforts of her home in the city and travel to the village of their chauffeur when her husband, Hemant (played by Saurabh Goyal), is roughed up by the goons sent by a moneylender. The village is unique in its setting – a bunch of five houses separated by the walled thickness of the sugarcane fields, which form a maze-like structure around the house. It immediately reminds us of the film, In the Tall Grass, a 2019 Canadian horror film based on a novella by the same name written by Stephen King and Joe Hill, which also revolves around a heavily pregnant woman lost in a field of tall grass along the highway. 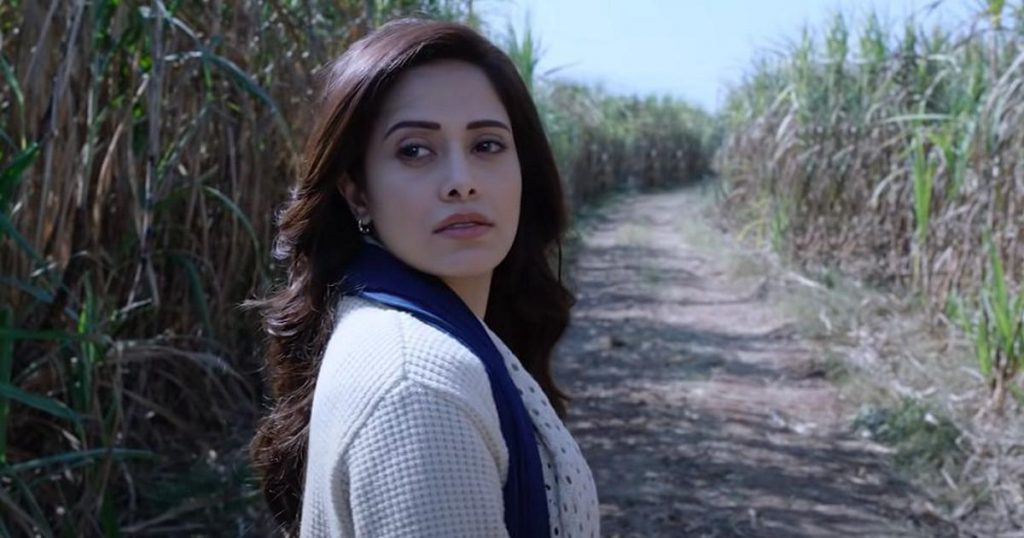 The setting is as eerie as it sounds, and it helps to add a sense of discomfort among us. In a couple of scenes, when Sakshi walks down the maze, the sound of her anklets tinkling in the silence did make me shift in my seat. However, the claustrophobia created by the towering sugarcane fields is easily dismantled by a background score that is over-eager to scare the audience. Too many jump-scares easily spoil the broth of a good horror film. While they were mildly appealing in the beginning, by the end of the film I was too tired to feel scared by them, almost expecting them after every fifteen minutes or so.

The play of light and shadow does help to build an ambience in the film, especially in the night scenes. It also doesn’t drain the colours from the screen initially but soon we find ourselves in murky darkness and bleached daylight. Curiously enough, there is a repetition of the shot where we see an artificial source of light and the moon in the same frame, which is a good shot but doesn’t add to the film so its repetition left me puzzled.

Nushrratt, who is almost a part of every frame in this film, is sometimes unconvincing in her state of psychological trauma at all the unnerving things happening around her. Her facial expressions barely manage to fathom the range of emotions that Sakshi is supposed to go through in the course of this film. Instead, Mita Vashisht, who is the chauffeur’s wife, Banno Devi, plays a diligent role. Every other character barely has enough screen time to be able to make an impactful difference.

Earlier in Chhorii, I was genuinely impressed with the idea of the metaphorical story to hint at the plot. Telling stories to pregnant women is an old midwife tradition, and I liked how it was woven into the plot. However, when an almost literal-visual enactment of the story is carried out in one of the scenes, I don’t know what I am more upset about – the lack of scare or the dismantling of my imagination.

I sincerely wish the film would have made use of this device more deftly to add a layer of complexity to it. Similarly, when Banno Devi tells Sakshi that she can look at a pregnant woman and tell what the gender of the foetus is, we are reminded of the typical midwife know-hows that all grandmothers boast of. Does the film challenge it, or provide a narrative to counter it? No, it doesn’t, but I wish it did; because of the many problems around childbirth, the superstitious assumptions around it need to be done away with.

Nearing the end, the film does elaborate upon what it set out to deliver – a message. Sadly, the message neither surprises nor stirs, thanks to Nushrratt’s monotonous facial expressions. Besides, it left me wondering whether the impact of this message will get carried forward through the villages or will it dissipate into the impregnable fields. The latter seems more like it.

Chhorii is just another addition to the long list of horror movies in Bollywood that are here just for the message but are greatly lost about the road they must take to map their plot. However, stay for the credits because a song by Swanand Kirkire really adds a solemn note to their intended message.

For a change, I would love to see some horror unleash in the lap of urban spaces because the dialogue that these settings create is that superstitions and gender discrimination are prevalent only in the spaces of Indian society, which are remote and away from city life. Chhorii premiered at the 52nd International Film Festival of India recently, and it is available to stream on Amazon Prime Video from 26th November onward.

Tick tick… BOOM! [2021] 'Netflix' Review: An enthralling Andrew Garfield spruces up a portrait of an artist coming into full bloom

Chhorii [2021] Review: Another Feminist-Horror Film, Lost in its Own Sugarcane Fields of Jump Scares & Bad Acting