November [2018] – A Peculiar and Aesthetically Striking Tale of Unrequited Love

The concept of love in thos fantasy/drama isn't romantic, but simply portrayed as a state of being; a state independent of all the decadent things defining the community. More than the mythologies and vacuous spirituality, the possibility of love and pureness of heart seems alluring. But 'is it enough to conquer, let alone survive, these corrupted, dark times?' seems to be burning question of the magical narrative

The gorgeous meets the repugnant in Estonian film-maker Rainer Sarnet’s metaphysical drama November (2017). Shot in astoundingly surreal black-and-white compositions, the film tells the bizarre and tender love story during a feudal era, where ghosts roam through the snowy woods and peasants must do their best (or worst) to survive the harsh winter. November is based on Estonian writer Andrus Kivirahk’s cult novel Rehepapp (Old Barny), which is set in the 19th century, in a small broken-down rural community. The foremost brilliance of this adaptation lies in Sarnet’s creation of a tactile aesthetic experience of an imaginary world. His eclectic shots of grotesque as well as the poetic historical landscape deliver a multi-sensorial world, one that’s reminiscent of the nightmarish semi-historical dystopia found in Ingmar Bergman’s The Seventh Seal (1957), Franticek Vlacil’s Marketa Lazarova (1967), and Aleksei German’s Hard to be God (2013). 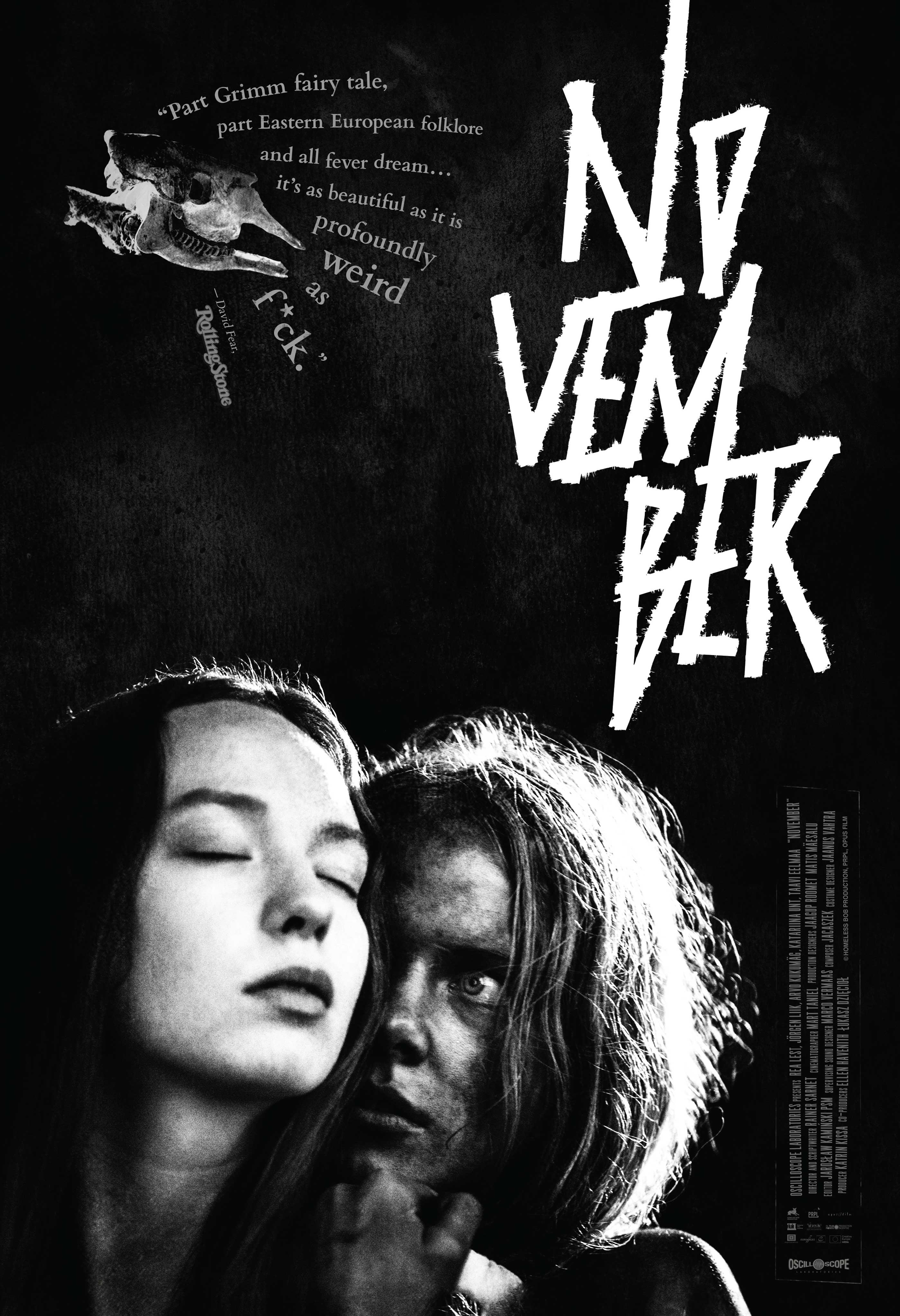 Rainer Sarnet remarks that his film is set in ‘a strange animistic world’. The village is stalked by dreadful plagues and the peasants’ ramshackle abodes constantly wage war with the mud to stay afloat in the surface, bringing to mind the near-apocalyptic rural landscape of Laszlo Krasznahorkai & Bela Tarr’s Satantango. Exhausted, oppressed, abhorrent, and overwhelmed might be the right words to describe the hardscrabble lives of these people. It is lamentable that Rainer Sarnet’s overall narrative doesn’t retain the thematic profundity of the aforementioned masterpieces. The wafer thin story seems utterly unfocused at times. Furthermore, it’s reflection on rituals and religion seems to work best only for those who are familiar with Kivirahk’s novel or at least the Estonian mythology. Yet Rainer Sarnet’s movie is compulsively watchable due to pervasive unsettling mood and haunting images that easily affix themselves into our mind.

The director’s objective or vision runs counter to the traditional historical film, in which people are often dressed up in historical costumes, but totally lack the psychology of the times. The impoverished peasants in November, however, are instinctive in their actions. Fear is what controls them. Be it pagan rituals or structured religious beliefs, the villagers of this animistic place consider the uncanny and supernatural as a force to be reckoned with. The whimsicality in the narrative is one of the intriguing aspects: dead come back, cloaked in pure white clothes and walk alongside humans; a sentient creature known as ‘Kratt’ is made of discarded materials like old bike seats, rusted knifes to do humans’ bidding; witches and priests are frequently consulted; and shady deals are struck with the devil himself.

November opens with an absurdist humor sequence, which recalls the wackiness of Jan Svankmejer and Terry Gilliam’s works. A lonely ‘Kratt’ wandering the snowy woods bursts into a stable and carries away a single dairy cow. Made of a cow’s skull, rusty bicycle chains and big scythes, the kratt takes off the ground using its blades and plops the cow in front of its master’s cabin. The strange creature greedily asks the master for more work. “Go make a ladder from bread”, the poor master angrily remarks and the kratt flees away to figure out the next task. The magical as well as the edgy pragmatism that encompasses the narrative is visible in this first sequence. The sentient kratts, made of serviceable man-made materials, is full of desire and at times less mechanical and rough than their human masters. Of course, the kratts are smaller elements of the narrative as the (thin) central story revolves around a peasant girl Liina (Rea Lest) and a wide-eyed stable boy Hans (Jorgen Liik). Liina falls for Hans, but Hans has fallen head over heels for the young somnabulant German baroness (Jette Loona Hermanis). Liina’s unrequited love causes her to embrace sorcery – she runs wildly at night as a werewolf. The cocksure Hans strikes secret deal to make his desire come true, while the baroness’ life hangs by a thread as she repeatedly sleepwalks to the large estate’s roof. The concept of love within this triangle however isn’t romantic. It’s simply a state of being, independent of all the decadent things of the community. More than the mythologies and vacuous spirituality, the possibility of love and pureness of heart seems alluring. But is it enough to conquer, let alone survive, these corrupted, dark times? 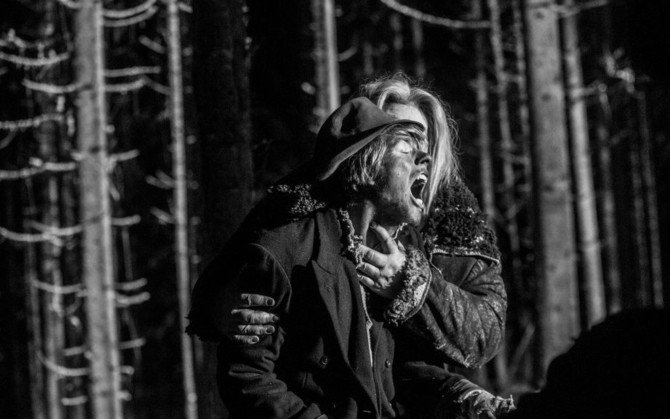 Director Rainer Sarnet states that November evokes the paradox that characterizes modern Estonian society, which is considered to be one of the most atheistic nations in Europe. He expresses how the lack of simple religious system is randomly replaced with preposterous, old superstitions. The concept of rebirth, afterlife, curse, plague become set of shady dealings and eventually doesn’t have much to do with belief. The villagers in the movie attend church and later spit out Communion wafers outside the church (saving it in pouches or clothes), hoping that the body of Christ could be used to bring down the animals (a sort of good-luck charm). In another humorous occasion, villagers take their pants off and put them on their heads, in the hope that plague won’t touch those with two backsides (plague materializes in the form of a ‘horned goat’, bringing to mind ‘Black Phillip’ from Robert Eggers’ The Witch). The villagers’ stealing habit and their treatment of ‘kratt’ further hint at their tenuous drive for material gain. The hardships of existence leads to these spiritually constrained feelings, where pure beauty or tender emotions are dismissed as the useless things. In fact, Sarnet and novelist Kivirahk’s use of religious themes and symbols could be summarized as a contemplation upon the hazardous human distortions caused by existential conflicts (a sort of cautionary, fairy tale).

Sarnet and cinematographer Mart Taniel’s resplendent visuals in glorious monochrome assures the power of the poetic image: the shot of procession of ghosts walking through a misty forest; blood dripping from the pages of Bible used for a blasphemous pagan ceremony; wolves frolicking in a snowbank, etc. Similar to the aesthetics of Antonoini, Jancso, Tarkovsky and Tarr, the landscapes possesses the raw beauty so as to be the real protagonist of the movie. Human characters are integrated into the landscape and there’s a certain close cohesion between the characters and their surroundings. Despite the fact that there’s lot happening here in terms of characters and themes, the core story is pretty thin and familiar to sustain interest on the whole. Frequently, the narrative feels like a collection of unrelated short stories. And moreover for a movie about pure love, its emotional penetration stays skin-deep. Though flawed, the visually opulent November (115 minutes) defies simple categorizations and ultimately provides a very unique and intriguing movie experience.

Oscilloscope will release November in US Theatres on 23rd February, 2018.

In The Mood For Love [2000]: Understanding Over Confrontation

November [2018] – A Peculiar and Aesthetically Striking Tale of Unrequited Love