One look at the recent entries in Bruce Willis’ filmography would be suggestive of the nature of the films he is involved in these days. The first thing that would be noticeable is the sheer number. Around twenty films in the last two years, and the upcoming year promises to be even more ‘productive’. The somewhat saddening truth becomes apparent. The pedigree of ‘Pulp Fiction‘, ‘Sixth Sense’ and ‘Unbreakable’ is shed. All that remains is the tenebrous, almost unrecognisable, ghost of John McClane. For it is that iconic action star of ‘Die Hard’ whom the director of ‘American Siege’, Edward Drake, wanted Willis to channel.

Willis had seen success in recreating similar personas in fairly recent action capers, a la ‘Expendables’ and ‘Red’. However, American Siege or, from what I gather, recent films of such ilk featuring Bruce Willis, is no big-budget franchise film. Bruce Willis’ recent filmography is littered with films such as ‘Fortress’, ‘Deadlock’ and ‘Apex’ (another directorial venture of Edward Drake) et cetera. These films invariably and ostensibly carry the burden of being tagged as B movies.

However, B does not necessarily mean bad. Without digressing, it can safely be said that I find an idiosyncratic charm in the creativity spurned from the lack of budget. The enjoyment of a good B movie is hardly in contradiction with appreciating cinema as an art form. ‘American Siege’, however, is not such a movie. It is the unawareness of its own character that makes ‘American Siege’ such an unenjoyable bore.

After getting out of the prison, Roy (Rob Gough) is ‘greeted’ by Grace (Anna Hindman). Then they pick Toby (Johann Urb), Grace’s brother. What follows is a long bickering conversation, riddled with generic lines. It would instantly become obvious that dialogues are not going to keep us engaged in any way in ‘American Siege’. Amidst the obviously transparent masquerade of swashbuckling attitude by the characters and their run-of-the-mill conversation, you would get clued in on their plan. It is of revenge. 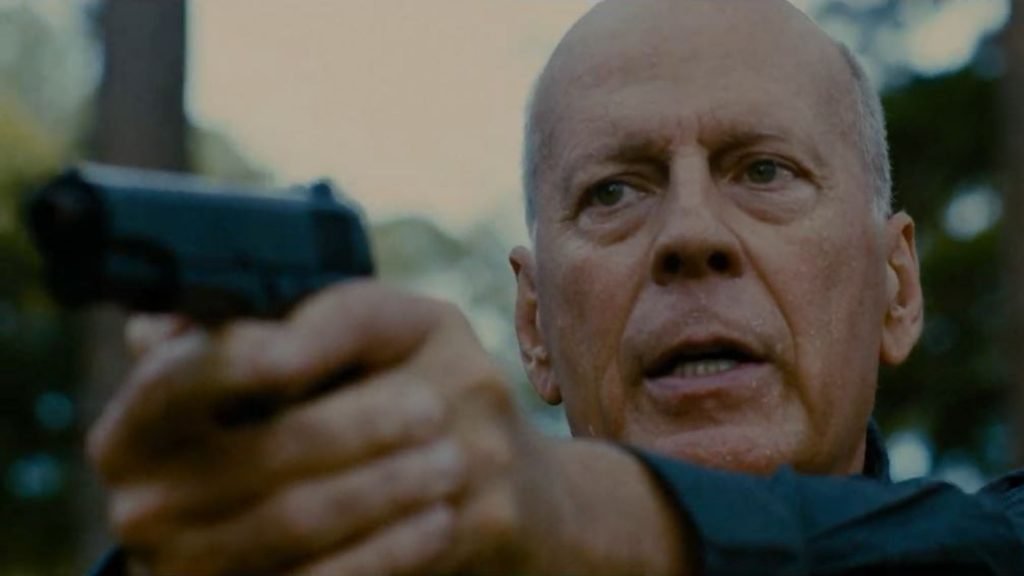 Grace and Toby had another sister, Brigit. Roy was the boyfriend. She is missing currently. And as part of their ill-conceived high-testosterone revenge plan, the gang of bereaved takes the local doctor Keats (Cullen G. Chambers) hostage. Clearly, the good doctor knows something of the matter. And then, finally, we are introduced to Bruce Willis’ character. Ben Watts is an apparently disgraced ex-NYPD officer, currently the sheriff of the town. Clearly, the character is written keeping Willis’ mood and willingness to invest in the film in mind. Willis, as per reports, had finished the shoot of his scenes in one day; and the result shows.

There are some other characters too. Charles Rutledge (Timothy V Murphy) is the only noteworthy one among them. He serves the purpose of the antagonist. Most of the others are immediately forgettable. The problem, as mentioned before, is ‘American Siege’ does not measure itself up. It tries to portray itself as a serious drama, with a serious hint of young lives of small-town getting unnecessarily lost. But, unfortunately, the film did not have the necessary gravitas in its story, neither the sincerity in its dialogues nor the authenticity in the actors’ performances.

Also, Read – 7 Films to Watch if you like Red Notice on Netflix

It becomes a ham-fisted execution of a done-to-death plot. This is where it largely fails as a B movie as well. There is no pulpy luridness to supplement the lack of artistic credibility. It is dull and thus not entertaining at all. The serious undertone of the film makes it worse. It is hard to find any redeemable quality in this film.

There is a serious lack of effort from almost everyone. Bruce Willis’ name gets the top billing, and thus he gets to share the top criticism as well. As mentioned earlier, his Ben Watts is written as weary and uninterested, obviously to go along with Willis’ real-time willingness and effort. Even after that, he comes across as beleaguered. The obvious disdain for his position does not transcend enough to pass off as that of the character. The quality of other actors did not help either. Anna Hindman’s Grace is one of the worst performances of the year. Only, maybe Murphy passes as decent as the ruthless Rutledge.

There is a half-baked gunfight at the end, where Willis finally shakes of his shoulder to perform some action. But, by that time, you would just want to see the frame saying ‘The End’.