A bunch of hotblooded seals take matters in their own heads and form their own army to defend the colony from sharks. Sounds somewhat similar to countless other animated films revolving around a bunch of misfits fighting back for their own identity. Yet, in the hands of creators Greig Cameron and Kane Croudace, the oft-repeated terrain feels rushed and trepid. Neither does it add anything new to the generic animated framework nor does it register enough for its own case. Given that Seal Team is propelled by a magnetic voiceover throughout, it’s a real disappointment that the creators did not invest more in the action- most of which is a series of interjecting, overlong plot devices marred further with inane jokes.

Seal Team, which is now streaming on Netflix, follows the headstrong Quinn and his bunch of seals who come together as one titular unit to fight the sharks. Quinn had lost his best friend Benji to the sharks, and ever since then, he wants his clan protected from them. Together, they form Seal Team, although they realise that it is not easy fighting the sharks. Not only do they need the expertise but also rigorous planning to navigate their ways through it. This is where Claggart, who had been part of the military team, comes into view, becoming the voice of reason and order, as well as helping the restless seals to fight for their own livelihood. Benji’s plans have consequences for the entire clan, as unexpected turns lie in store. This develops into full-blown seals vs sharks battle for survival. 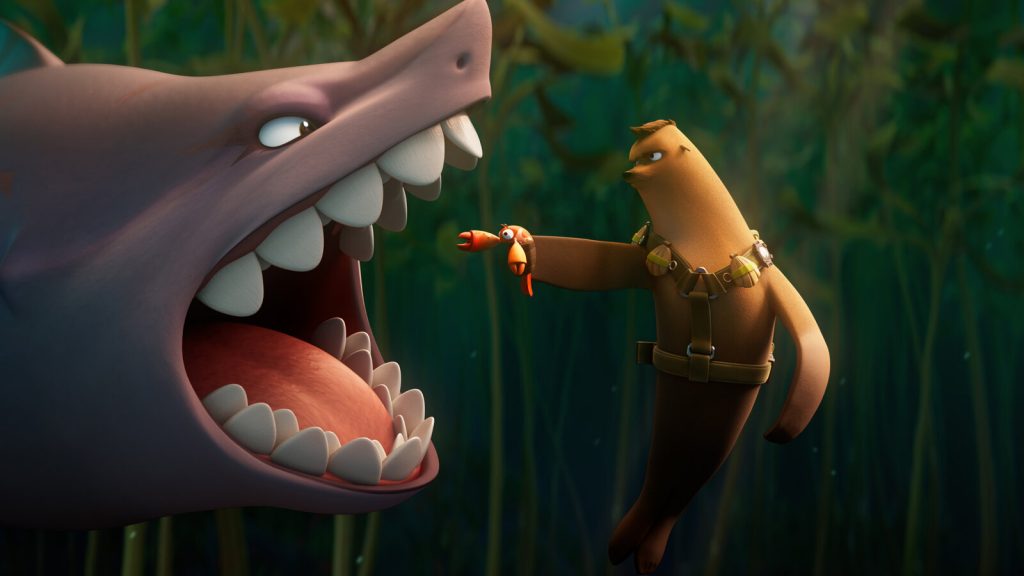 Neither the seals nor the sharks speak in a straight manner. It gets bizarre and unwanted after a while- given whatever they say always has its own tail of intended pun attached to it. Most of it does not land at the right place, and at its worst, feels completely unnecessary. Even the revelation of all seals being colourblind comes at an instance that betrays the progression of events till that juncture. “Oh, I have to rethink everything!” since what colour can these seals predominantly see? Pink- a gaudy shade that pervades the entirety of the film to an extent that becomes a struggle to watch.

Headlined by a strong voiceover cast of J.K. Simmons, Kristen Schaal, Jessie T. Usher, Patrick Warburton, Matthew Rhys, and Julian Alexander Smith, Seal Team could have been run on an entirely different course. In its desperate attempt to reveal possible questions, Seal Team swims along with a lot of trepidations that bring it down. Given the one-note overarching plot of the film, the screenplay written by Greig Cameron would have focused on the seals who are practically indistinguishable from one another except for the voices. The story by Brian Cleveland and Jason Cleveland is too incoherent and never really pulls itself up. The jarring, loud background score helps little in finding the course of the moment- instead, it constantly cuts through in scenes distilling them into an incongruous mess.

But perhaps Seal Team misses the mark by large in its animation itself- deriving the figures seals and sharks as creatures sloppy enough to not feel true to their constant sense of movement. It does not help to place these spirited voices, given so much action pops out in its runtime of 1 hour and 30 minutes. The action takes turns, stretching itself out some of them do feel out and about the place- a weapon that is basically a shrimp bullet, and the entire sequence involves the hiding beneath numerous colour-changing octopi.

Seal Team works only when it lets its spirit run through the action- watch out for the climax and then the cameos in the end credits- that really steal the thunder away. The predictability will definitely count, but what really percolates down by the end is the heavy-handed effects in bringing the pretty washed-up story to travel its own route. Yet, Seal Team is so immersed in its own little world of seals and sharks that it never managed to look close enough- thereby stumbling several times to find humour and lacking a certainty that comes with self-reflection. By the time, Seal Team braces its final moments, one is so exhausted by the crowd of a heavy palette and even heavier visuals, little really sustains.

American Siege [2021] Review: Dull and Boring, Even by B-Movie standard