Home»Articles»Which Floor to Happiness? The Lift Boy (2019) Weaves a Simple Yet Effective Tale of Optimism
Articles/Essays

The Lift Boy (2019), Jonathan Augustin’s directorial debut, is an endearingly heartening tale that will make you both laugh and cry, smile for a minute, and then shroud you in sadness the very next, but leave you with hope in your heart and a refreshing imprint on your mind. It is a simple film from the beginning to the end and does not try to be unnecessarily anything more than that. The director interweaves multiple messages in the plot and sprinkles them evenly throughout the 1 hr 47 minutes of the film, and despite some underdeveloped characters and orphaned story aspects, the movie leaves you with a smile once the credits begin to roll.

Central to the narrative is Raju (Moin Khan), an aspiring engineer who speaks in ‘millennial’ English day in and day out, except for the time when he is with his parents, with whom he converses in Marathi and Hindi. This is the only time he can let go of his exterior self, the one reserved for the outer world alone. One look at the house and we can see their financial position; the three members live in a one-room house that doubles as a kitchen too. While his mother works as a house help, his father renders his services as a liftman at Galaxy Apartments- which has been his workplace for 3 decades. Theirs is not an easy life, but they have done everything in their capacity to ensure that Raju gets the best education there is.

However, Raju’s life crumbles down like a house of cards one day when his father leaves for work but doesn’t come back home; he reaches a hospital instead, having suffered a heart attack. Raju, with his well-spoken English and a demeanor reserved for the rich, half-heartedly replaces him for the 12-hour shifts, a test of his patience and perseverance. Working in the lift is a ‘lowly’ job for him; he is an engineer, crunching numbers and solving numerical is his forte, not pressing buttons and plastering a perfunctory fake smile on his face to greet the building’s residents. However, there is only one impediment; a particularly difficult Drawing examination separates him from his dream of becoming a qualified engineer, and he finds himself stuck, quite literally, in a lift. Far from a corporate calling and what he had envisioned for himself. 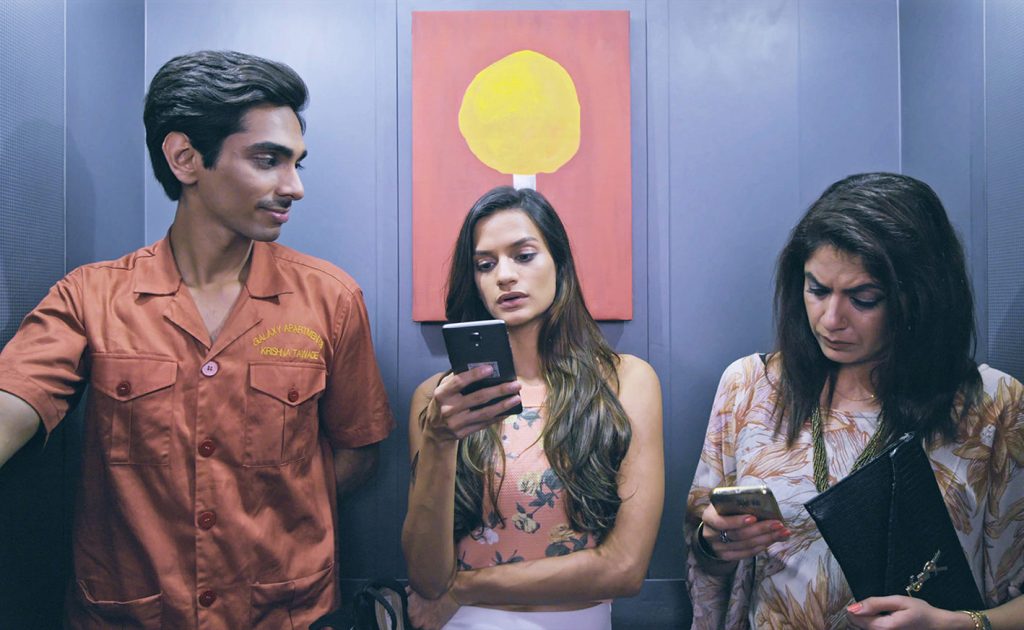 We are drawn to the movie because of its fast pace and the lively characters that dominate the lift (and the screen). There are all shades of a quintessential urban life here, perhaps a microcosm of the entire India. He meets a househelp, an aspiring actress, and a former model, among others. Once the building owner, Mrs. Dsouza (Nyla Masood) takes a liking to him, Raju gradually warms up to the idea of working there every day, even prioritizing his duty over a cup of tea or a moment of relaxation. She also shoulders the responsibility of helping him sail through his exam, and what follows is a heartwarming tale of friendship between two people who connect on multiple levels despite age and class differences.

This coming-of-age story, however, is not entirely without its flaws. Some storylines are hinted at but not developed entirely, for reasons not known to the audience. For instance, Raju is portrayed as someone who reads The Great Gatsby and wants to become a writer, but this idea is written off and conveniently forgotten as if it never existed in the first place. The scenes after his instrumental Drawing exam also seem a bit rushed, with seemingly forced yet interestingly effective elements of melancholy. We see the same 2-3 locations on the screen (the titular lift gets a fair amount of screen space), and it becomes slightly predictable which location will follow the other.

Although these issues make you pause and wonder what just happened, they don’t really hinder the film majorly, which eventually does a good job in weaving a tale of hope, upward social mobility, and happy relationships. Raju never wants the lift to become an end for him, however, even before he knows it, it becomes the means to an end, eventually ‘elevating’ his life to a place he had only once dreamt of. There is serendipity involved in everything, even in places we least expect it to. In the end, what was once a robotic button-pressing job for him translates into a pathway to success, justifying how both- the journey and the destination- are equally important milestones in life.

The Lift Boy is streaming on Netflix.