Home»Reviews»The Righteous [2022] Review: A Strong, Thinking piece about Religion and Faith that falls just short of the mark
Reviews/VOD

“Kill me, or I will take away from you what you love the most. This is your punishment. This is your penance.” This is some way to square a character. But it is a terrible position to be in. ‘The Righteous Frederick Mason finds him in this predicament. The former clergyman is grieving his adopted daughter, still in the green of her life, dying in an accident. He lives with Ethel, his wife of ten years. Every day he prays for forgiveness, fervently looking to God to give him a second chance. His obsession turns into his worst nightmare when a strange man stumbles upon his door one night. Initially, Fred and Ethel are charmed by this young man, Aaron. But soon enough, Fred realizes that Aaron brings with him an ungodly truth from his past that threatens to eat him alive.

At the outset, ‘The Righteous’ is fashioned as a drama heavy with weighty themes like the tangibility of religious consequences and the contours of dying faith. The many exchanges between Aaron and Fred reminded me vaguely of Tommy Lee Jones’ ‘Sunset Limited‘. Although it does have the same existential gravitas to it, the dialogue leads to more menacing places. It is dark, relentless, and gripping in the most literal sense. The beautiful cinematography by Scott McClellan in black and white affords an antique, distant look to ‘The Righteous’ that adds to its tonal appeal. The phenomenal work does not rely on quick-sand innovations or flashy movements. Instead, much like O’Brien’s meditative approach, it has a beguiling grace about it. 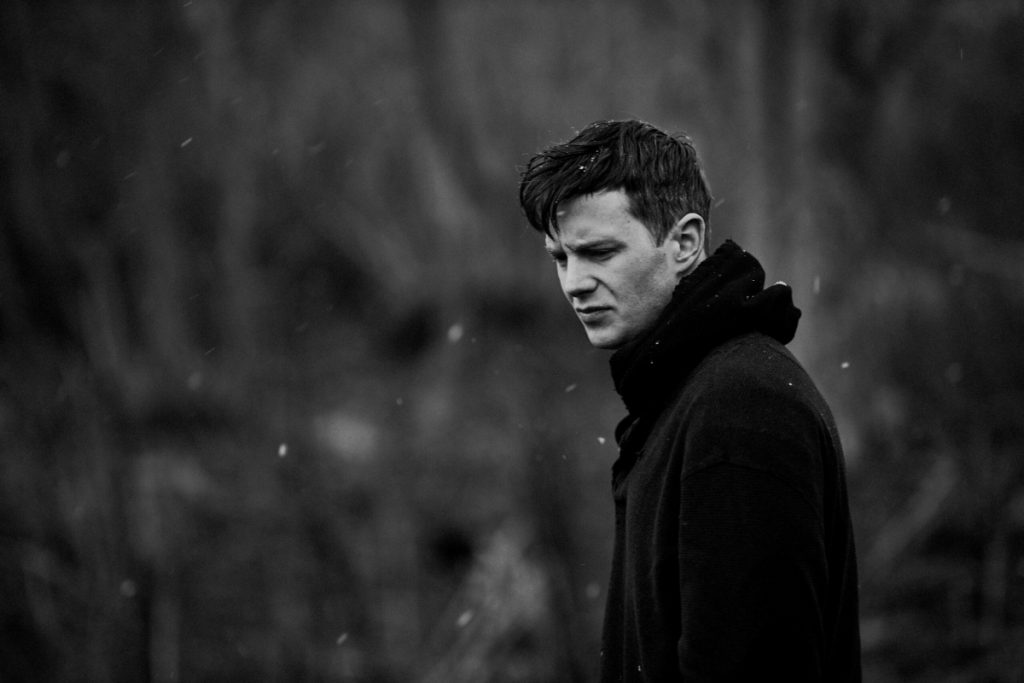 It would be amiss to say that it belongs entirely to the horror genre. In hindsight, there is not a lot of it that is crucial. The supernatural flourish comes in the form of Fred’s guilt and Aaron’s strange characteristics. The ambiguity that defines him is the psychological weapon that O’Brien has up his sleeve to surprise audiences.  You almost instantly get a sense of melancholy defining the mood the moment you see images like Fred and Ethel sitting at a mass dressed in black and reeling with the tragic death of Joni. It must be said that actor/director Mark O’Brien makes a bold choice by going against populist sentiment and using this technique to tell his story. I am a sucker for these minimalist, stylish-looking slow-burns grounded in altruistic exposition choices such as faith, and performed with the grandiose and rawness of theater. But more often than not, filmmakers tend to get too ahead of themselves.

Their passion and steadfastness to their artistic integrity and the rich traditions of yesteryear greats operating in similar spaces cloud their decision-making. The outcome is that the viewer is gradually detached from the plot. When it finds that the story is not readily accessible, the interest wanes. And when that happens, you, as a director, fail to get the most out of your actors and crew. This is somewhat the case with ‘The Righteous’. As well as it is made, technically, and as well the tense buildup to the core of the film is, it falls prey to the familiar territory of doing “too much”.

I felt that somewhere along the way, O’Brien gets a bit overwhelmed by the power of his incomplete structure packing such delightfully dark and explosive possibilities. He is not able to fully capitalize upon them and take advantage of the work that is done around him. The discomfort in his narrative, which is supposed to thrust the movie in the right direction, collapses unto itself on the back of the sheer pressure of expectations. The impression of the craft does not last for long. He is at fault here for probably having dug a little too deep his claws into a subject matter that he does not understand fully. He does resemble a young Tom Hardy a lot and I will definitely be looking forward to seeing him more in the future. The same goes for the actors playing Fred and Ethel.

The Righteous’ is more like a revenge drama: God’s revenge on Frederick for abandoning his child and its mother, in the name of God. He wore his cloak, and took an oath in his name to protect his virtues, and spread his message. And he failed. But there must be a reason why God is putting him through something like this? Can He be this vile, this human? No. Fred’s penance will set him free. It has a strong aesthetic but it’s not one that effectively matches the story, and goes for something overly safe rather than playing with the darkness it holds. The film comes extremely close to greatness and unlocking the anticipation to get a tough genre right, but it is a difficult sell.

6 Films to watch if you like Day Shift on Netflix