12 Angry Men is an all-weather film. The classic is one of those rare pieces that can be seen on any day, in any mood, and the result will not be disappointing. Sidney Lumet’s legal juggernaut is born out of the jury’s deliberations on the question of convicting a minor for murder. Requiring a unanimous decision, one juror’s hold out unfurls the dynamism of reasonable doubt in criminal law, while also seeing the American society from the lens of race, class, and culture. The film has been remade in umpteen languages and still holds its coveted place among the medium’s best offerings. The dialogue-driven bottle movie has both, the depth of emotion and intellectual argument, enough to keep you engaged.

We decided to pay homage to the film by coming out with ten great picks like ’12 Angry Men’ that you might enjoy. Happy reading! 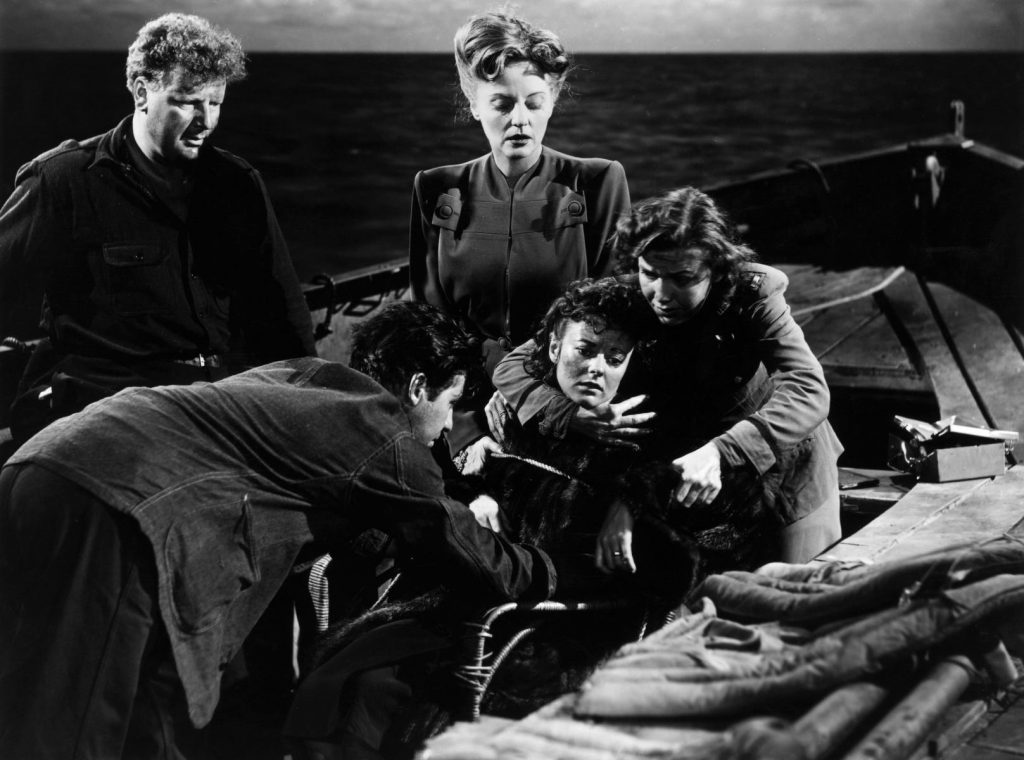 Hitchcock’s ‘Rope’ could have been a, equally worthy candidate for the list. These two films combined give legs to the theory of why he was called the master of blocking in Hollywood. Just like Lumet, Hitchcock’s challenges were also to figure out how to frame the film. The sizeable cast, restricted spaces seemed difficult to navigate. But the master made easy work of it. ‘Lifeboat’ is a rich exposition of competing values of the good and bad, and similarly to ’12 Angry Men’, embroil intellectual debates about the same. The nature of animosity is more pronounced and distinct comparatively, but the core remains the same.

His trend of creating redoubtable villains continues in the form of a Nazi German. What is even more admirable is how his thesis comes to fruition with the climax. The tension in ‘Lifeboat’ is certainly more enhanced than in some of his other films. As a result, the meeting of expectations is pleasantly and intentionally muted. This works in favor of the film, making the experience of watching it an exhilarating one. 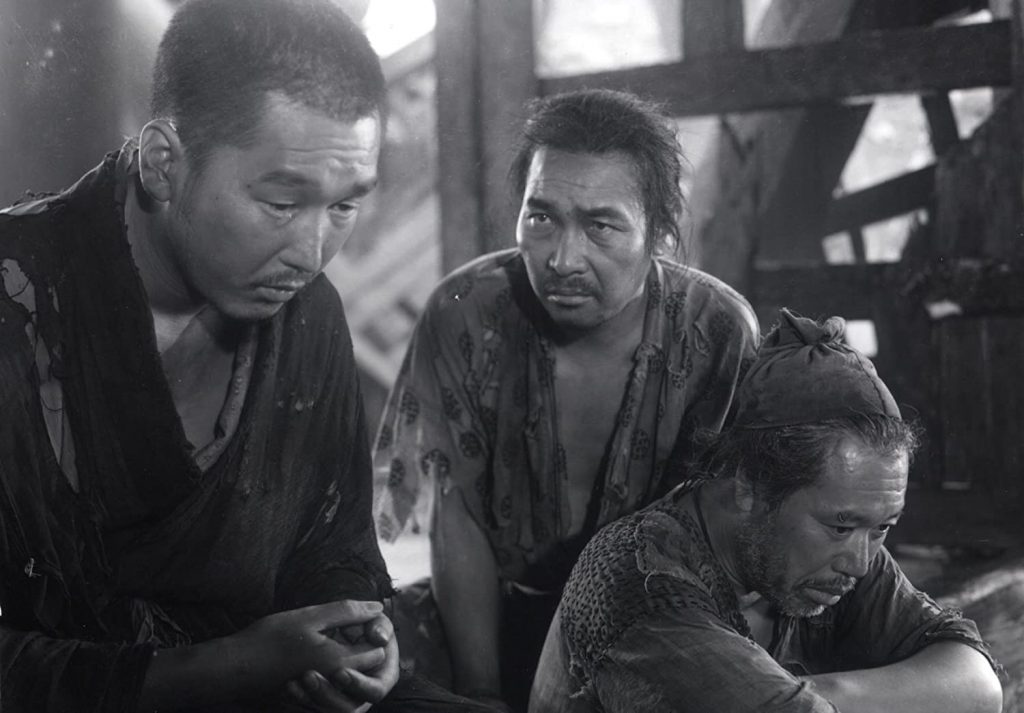 Kurosawa’s ‘Rashomon’ is a brilliant companion piece alongside ’12 Angry Men’. Both the features offer an interesting opportunity for the respective directors to allow audiences to become active participants in the films’ central conflict. It is through their moral fabric that they examine the events in the films. ‘Rashomon’s more uninhibited style is pitted against Lumter’s didactic approach. There are several differences in terms of the intensity of the acting and theatrics that have less of a say in 12 Angry Men. The outcome in the latter is more noble and pleasing, as opposed to ‘Rashomon’, that swimmingly concludes on a bitter and ambiguous note. But the quality of filmmaking and storytelling remains intact across these two films. 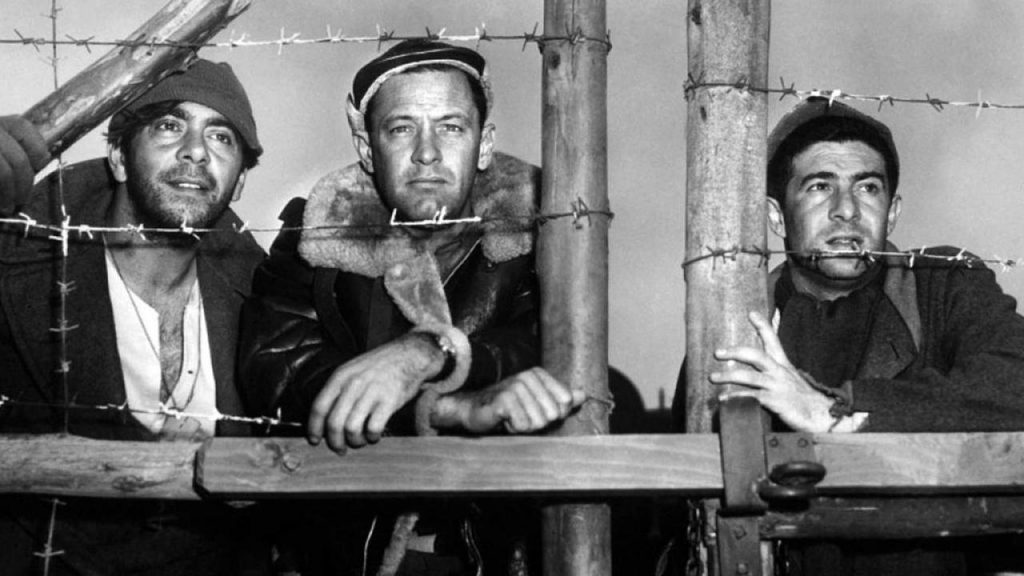 Billy Wilder’s ‘Stalag 17′ touches upon familiar themes of justice and innocence like ’12 Angry Men’. It is another classic film that has become the inspiration for umpteen progenitors. Set in a PoW German camp (called “stalag”), the story follows a group of American airmen captured in the stalag, figuring out ways to escape. Sefton, an indifferent sergeant, becomes the chief suspect after the Germans are able to prepare according to the American’s secret strategies. Sefton is the perfect anti-hero for the story that desperately wants one. The huge cast confined in the small barracks provides hearty entertainment. The laughs in the backdrop of tragedy set the perfect tone for Wilder to carve a whodunnit-style sub-plot.

The use of reason, logic, and a switchblade being thrown on a wooden table to prove a guilty man’s innocence equate ‘Stalag 17′ with ’12 Angry Men’. Like Fonda’s juror, William Holden’s Sefton is the black sheep in the herd. When no one seems to believe him, he must rely on his wits to navigate tricky waters and get out of trouble. ‘Stalag 17′ is not as dialogue-driven and introduces other storytelling elements to complete itself. It is arguably funnier and less somber; despite being centered around war and death. Nonetheless, it is as enjoyable, if not more, as ’12 Angry Men’, and as serious a movie from a genius filmmaker. 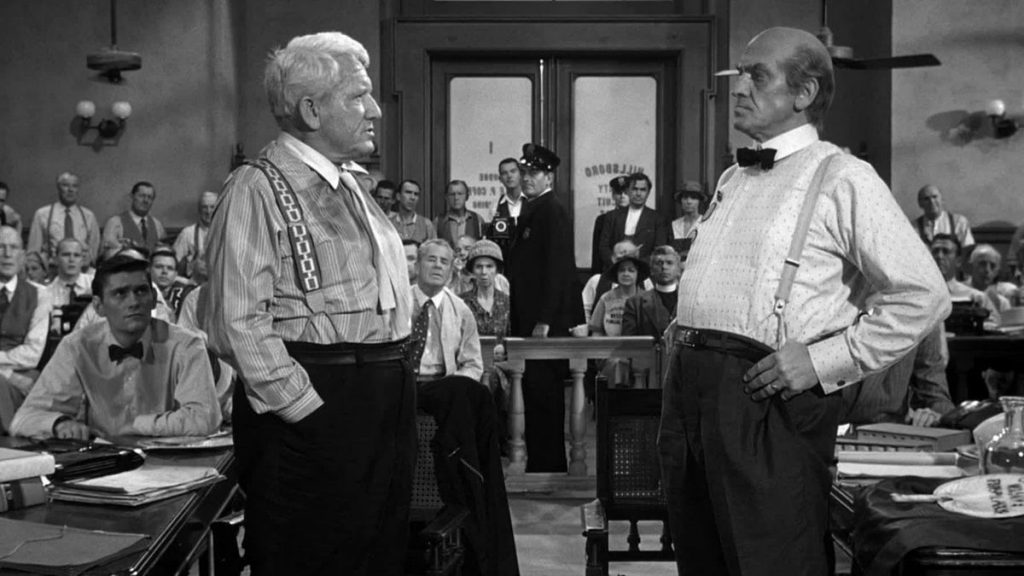 The battle of ideals dominates much of the legal arguments strewn together in ‘Inherit the Wind’. It would be rough to dismiss the film as another courtroom drama because of how well it captures the fascination and introduction of media in legal trials. The phenomenon is widespread today, looking at how Rhea Chakroborty and Aryan Khan (in India) were pitted against populist sentiment. The themes of the “media circus” are as relevant today, even more so with the advent of social media. ‘Inherit the Wind’ comes closest to ’12 Angry Men’ in marrying legal acumen with compelling drama in a courtroom.

The substance of the battle that Cates and Drummond have to fight outside of the courtroom circles the notions of religion and narcissism. Gene Kelly’s character is where ‘Inherit the Wind’ differentiates itself from its contemporaries and peers. Hornbeck (Kelly) is the ideal poster child of the media today. Despite his cynical interest in the affairs, his steadfast neutralism is fascinating. Even he is not a crusader of truth, he isn’t a farcical liar either. ‘Inherit the Wind’ is first-rate entertainment enjoyable as a thesis on the confluence of media and an unalienable democratic duty, while also standing up as a quality legal thriller. 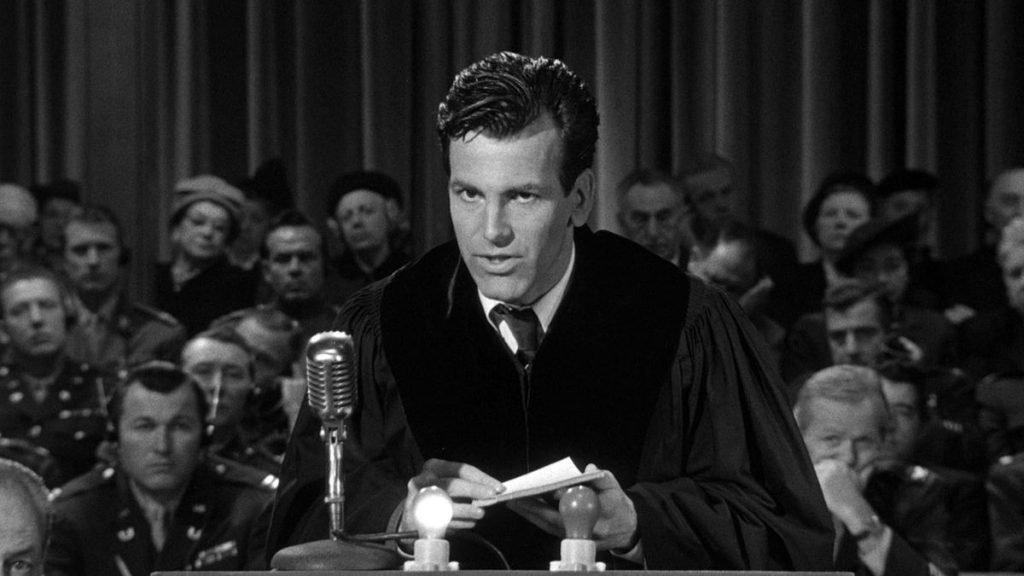 For a toe-to-toe matchup in terms of courtroom drama, Stanley Kramer’s ‘Judgment at Nuremberg’ stands tall. A keenly observant film about human values and the reconstruction of Europe after a deadly world war, Kramer is strictly procedural in representing stellar arguments. Just in the manner, Lumet does not compromise the very foundation of ’12 Angry Men’ as a sound legal battle between reason, Kramer prioritizes the law. The passion-filled arguments from both sides fill your heart with terror, fright, and sadness. The horrors of Hitler are fleetingly, but gravely, brought back to remind us of the value of the rule of law.

While neither of the films is preachy, ‘Judgment at Nuremberg’ is more well-rounded in characterizing and humanizing the accused and the executioner. Judge Haywood’s inquisitiveness symbolizes a collective consciousness of ordinary people, who yet, after so many years, fail to understand how something like this is humanely possible to do.

David Mamet proves how good writing can significantly elevate a film in Glengarry Glen Ross. The electrifying screenplay defines the narrative as a function of spitfire dialogue and a revolving game of chairs that packs the potential to destroy lives. The A-list cast is particularly impressive. In the absence of any noteworthy warmth or compassion, their collective energy dictates the tone of the film. Just like ’12 Angry Men’, ‘Glengarry’ makes the most of its minimal setting to put into the spotlight the lives and ideologies of its subjects. Through the long-trodden conversations, the films uncover the truth about their lives and what drives them to live another day.

There is also a hint of corrupted moral turpitude, a subtle nod to features like ‘Wall Street’ that symbolized corporate American greed. The competitive nature of the central conflict allows director James Foley to play around with the idea of “selling the salesmen” to us in the way they sell themselves. Just how they execute their zero-sum games shows why modern classics like ‘Wolf of the Wall Street and ‘Margin Call’ got their calls so right, borrowing in theory from films like Glengarry Glen Ross. 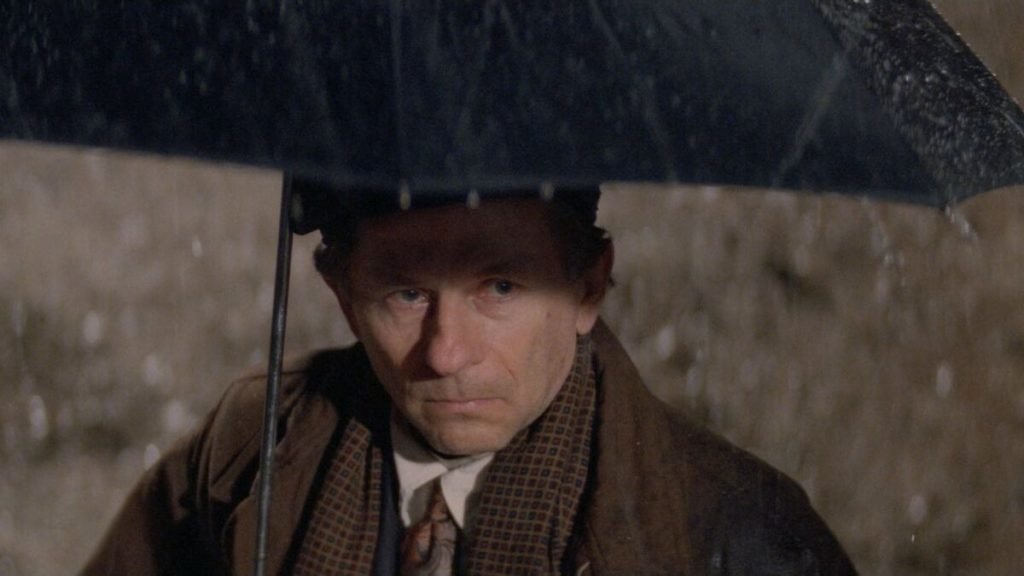 Single setting films do not come more engrossing than ‘A Pure Formality’. Using a simple premise and a detailed background of the characters, writer and director Giuseppe Tornatore creates a marvel of the film. Completely unhinged from some of his previous works, ‘A Pure Formality’ never quite reveals its hidden agenda. When it does, the result is shocking to the extent you might not have imagined. The relentless nature of the dialogue is restrained and critical in a trained, professional manner. The moment things seem like slowing down, a new event is uncovered, that may or may not lead the investigation closer to the truth. The quality of men and intellect on display reminisce the debates in the jury room in 12 Angry Men.

Like in it, doubt plays a pivotal role in forging the tension. An ironclad structure facilitates the storytelling and something is enthralling about imagining what happened through one’s creativity. Roman Polanski and Gerard Depardieu give assured performances and perfectly ground the story in the station. A Pure Formality is a psychological warfare at its most scathing and uninhibited. 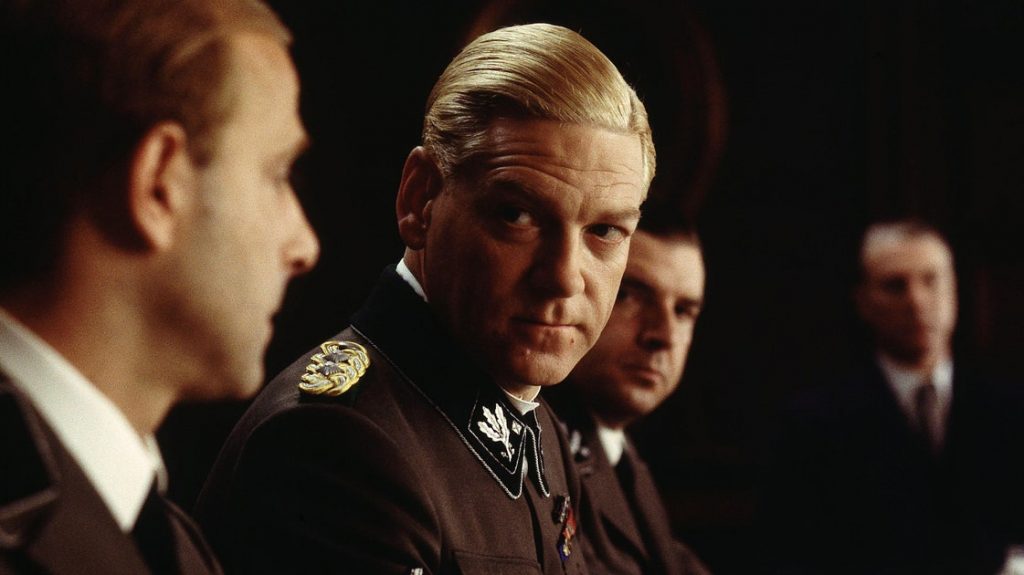 ‘Conspiracy’ is another underrated classic set in a single-room revolving around a single conversation. With some shocking content, it stands out as one of the boldest dissections of the Nazi way of thinking. The Wannsee Conference, which takes place in the runtime, is reproduced verbatim. Names like Kenneth Branagh, Colin Firth, and Stanley Tucci star in the lead roles. What is interesting is that the transcript from the conference is modeled around plans for “the final solution”, but also goes into great detail setting out the Nazi agenda about world dominance and the Third Reich. Like 12 Angry Men, the tightly wound and tense atmosphere of the room and arguments that flow from different sides are simple and effective in thought and execution. Despite the smaller scale, ‘Conspiracy’ exceeds expectations and falls a perfect companion piece to Lumet’s classic. 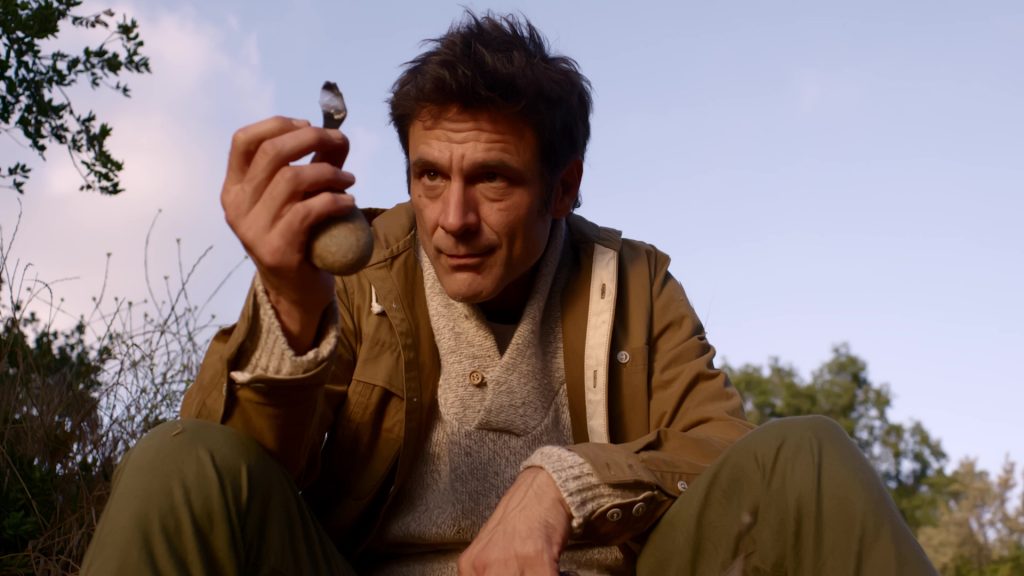 When I first saw the film, I did not understand much. Still don’t, but my respect has grown manifolds. An idea made up of a thought, a sentence, or even a word, is stretched to cover man’s civilization on earth. Gradually, as the realization dawns upon the people at Professor Oldman’s farewell party, an overwhelming curiosity guiding mankind for centuries takes over. Scientific, historical, anthropological, and many points of view dissect Oldman’s knowledge of what has happened, and in theory, what we think has happened. ‘The Man from Earth’ is heavily dialogue-oriented, like ’12 Angry Men’, although works on completely different themes. The film in itself provides a wide range of ideas and philosophies that would intrigue a diverse spectrum of audiences. 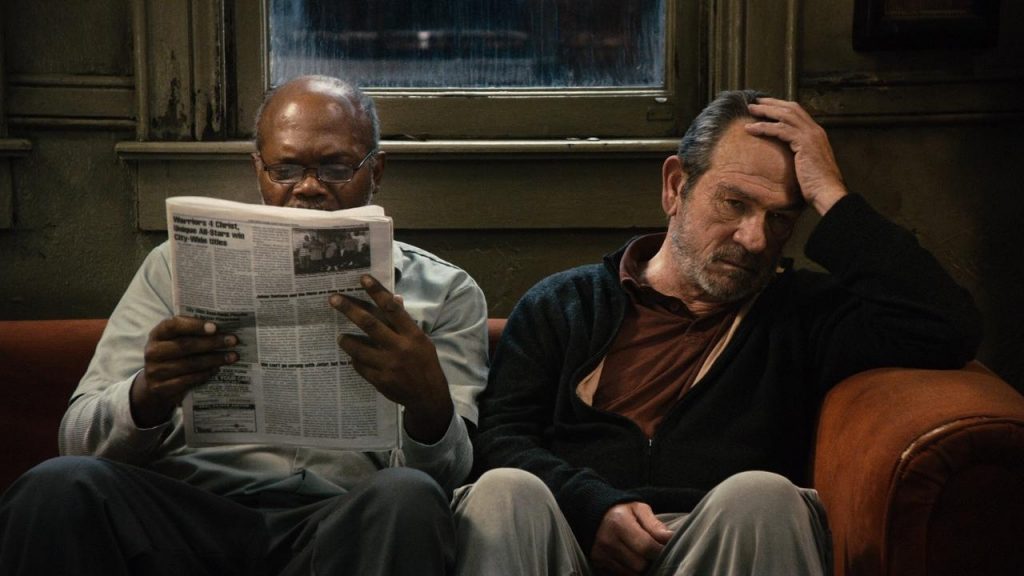 ‘The Sunset Limited’ is one of those films that hauntingly realizes the potential of dialogue like few other films. The vastness it creates runs through an ocean of thoughts, all the while remaining fixed on its two subjects, “Black” and “White”. The harangue-like structure of their respective thesis almost overpowers the universality of the film’s themes. The chance encounter between the two happens as the latter is about to jump in front of the Sunset Ltd. and the former saves him. Their to and fro is surprisingly grounded, and funny and charming in patches, despite the seriousness of thought. Tommy Lee Jones and Samuel L. Jackson’s characters represent two streams of human consciousness that are not contrarian but co-extensive with the idea of life.

Phrases like “Happiness is contrary to the human condition”, and “Suffering and human destiny are the same things” lend an existential gravitas to the dialogue. Like ’12 Angry Men’, these conversations come from people with different backgrounds, education profiles, and varying degrees of privilege. The association of religion and poverty, knowledge and happiness, reflected in the jurors as well. After a point, ‘The Sunset Limited’ makes God and his intentions the center of the narrative, dampening the impact it manages to build hitherto. But that in itself cannot take away from it the rare, respectful, and engaging representation of everything mankind knows.

Neymar: The Perfect Chaos [2022] 'Netflix' Review: It Will Come Across as The Perfect Disappointment