When it comes to mockumentaries, The Office (2005-2013) and Parks and Rec. (2009-2015) easily come to one’s mind. When it comes to feature films, it is a storytelling format that has existed since the 40s. Things got very dark and serious post the release of The Blair Witch Project (1999) and the popularity of the found footage style of film-making. And then for a prolonged period, there wasn’t anything quite memorable until What We Do In The Shadows (2014) came along. While that movie has branched off into a franchise of its own, Jake Szymanski helped the resurgence of the sub-genre with 7 Days in Hell (2015), Tour de Pharmacy (2017), and John Bronco (2020). And it looks like Jonathan Krisel is here to continue it with John Bronco Rides Again.

For the uninitiated, sometime last year, out of the blue, a mockumentary starring the one and only Walton Goggins was released on Hulu, where he played the titular character John Bronco. Who is John Bronco? Well, apparently he’s the greatest pitchman in the history of advertising and the person after whom the Ford Bronco is named. Yes, that is all fake. But you cannot help yourself from doing at least one Google search to check if any of it is real. That’s how convincing it is. Now, the first movie was all about finding Bronco by deconstructing his past and scripting his comeback of sorts. That was unfortunately upended by Bronco, who drove off into the sunset. John Bronco Rides Again is about finding Bronco again and actually getting him to do the advert he was meant to do.

Like every good second installment in the franchise, this short film takes away the protagonist’s powers. Which in this case is John Bronco’s ability to do a pitch. It’s simple, yet effective. And this twist, if we can call it so, is only elevated by Goggins’s performance. The excitement, the frustration, the sudden realization that he has lost “it”, the gradual increase in energy as he regains his powers, and the final flourish as he manages to finally do the pitch, is a total trip. Since the line between mockumentaries and parodies is very blurry, this performance can be overlooked and labeled as derivative. However, if you look closely at Goggins’s physicality, the emphasis on the accent, the awkwardness in his speech, and this non-stop horny energy he wants to exude, you will notice how nuanced of a performance it is. Goggins isn’t taking this lightly. He’s putting his heart and soul into it and it’s paying off in every frame and second of the short film. 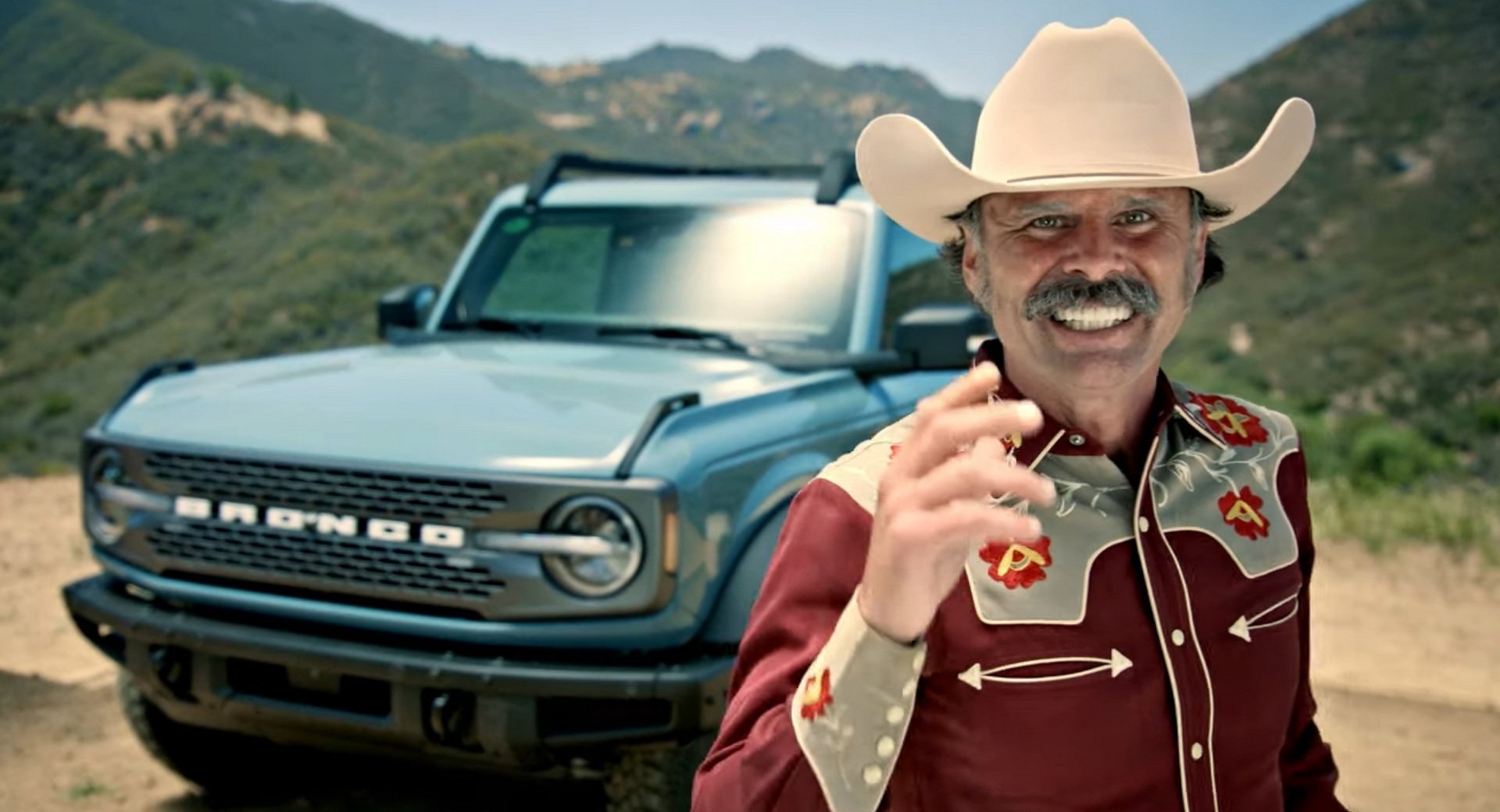 Olivia McManus’s production design, Joe Stakun’s editing, Nate Hurtsellers’s cinematography, Doria Debartolo’s makeup, and Heather Allison’s costuming is at par with Walton’s performance. As the narrative bounces from one era to another, everything from the camera lens to the lighting, the dress, the frame rate of the footage, etc. has to change. For example, we know that Daniel Stacks’s (Tim Baltz) podcasts are a bit. But it genuinely looks like a fanboy’s room, complete with John Bronco paraphernalia. We also know that the Bronco’s advert with Michael Chiklis as a child actor is a bit within the bit that is the movie. However, it is insanely different from the podcasts. It has its own, cheap-looking production value and the footage features light trails (something that’s reminiscent of videos from the ’70s and ’80s). And it’s that level of attention-to-detail that elevates it from just another parody to one of the best mockumentaries of all time.

If that’s not enough to convince you, then there are the animated advert, the “mystery” episode, and the Moby Dick reading that, like everything else in John Bronco Rides Again, comes out of nowhere. Due to the success of Archer (2009-ongoing), people have become used to the limited animation style of film-making. But it wasn’t a stylistic choice when it was conceptualized. It was a necessity due to budgetary reasons, something that was evident in the off-kilter designs, the grainy footage, and the harsh quality of the voice-acting. You can see the same in this short film. And the accuracy is pushed to such an extent that, as mentioned before, you will be compelled to search for the real history of John Bronco. As for the audio book, simply put, it’s a fun way of utilizing the time taken by a character to travel from point A to point B to subtly flesh out Bronco. More movies should do that instead of, you know, using some basic footage of a car zipping across the frame.

John Bronco Rides Again doesn’t take itself too seriously. So, don’t go looking too deeply into it because that will probably ruin the whole viewing experience. Just sit back, relax, make a note of the little bits and pieces of set design, production design, and costume design peppered throughout the short film, and soak in Walton Goggins’s charm and energy. And hope that it gets turned into a feature-length film (or a franchise) so that we can get to see Goggins do more of whatever this is.

Dug Dug [2021]: 'TIFF' Review - A satire on religious faith, myth making and the politics of it all