Touch Me Not [2018]: ‘TIFF’ Review – A Flawed yet Oddly Interesting Therapeutic Essay on Openness and Intimacy

It is to the director’s credit that none of these sexual acts or nakedness is portrayed in an exploitative, provocative manner. Adina Pintilie's compassionate gaze remains intact throughout the narrative, providing this protracted psycho-sexual journey an earnest vibe.

The confrontational directness with which Romanian artist and film-maker Adina Pintilie pitch her quasi-fictional explorative essay Touch Me Not (2018) would not be easy to take in for viewers. It opens with the macro shot of the camera slowly moving down a man’s body, engulfed in body hair, and in this quiet movement, the camera also lingers on the man’s flaccid penis.

It takes some time to piece through Adina Pintilie’s elliptical narrative to discover the characters and the issues they face. Director Adina tackles emotional journeys of different persons, starting from Laura Benson, a 50-something single woman with an aversion for physical closeness. A childhood trauma ostensibly connected with her now dying father is hinted as the root cause of the fear, but it’s not expressed in a clear-cut manner. Laura attempts to breakthrough her trauma through meetings with various sex workers and counsellors. This includes a trans-woman Hanna and a bearded touch therapist (Seani Love) who invites Laura to let out a guttural howl in order to associate with her inner anguish and rage. 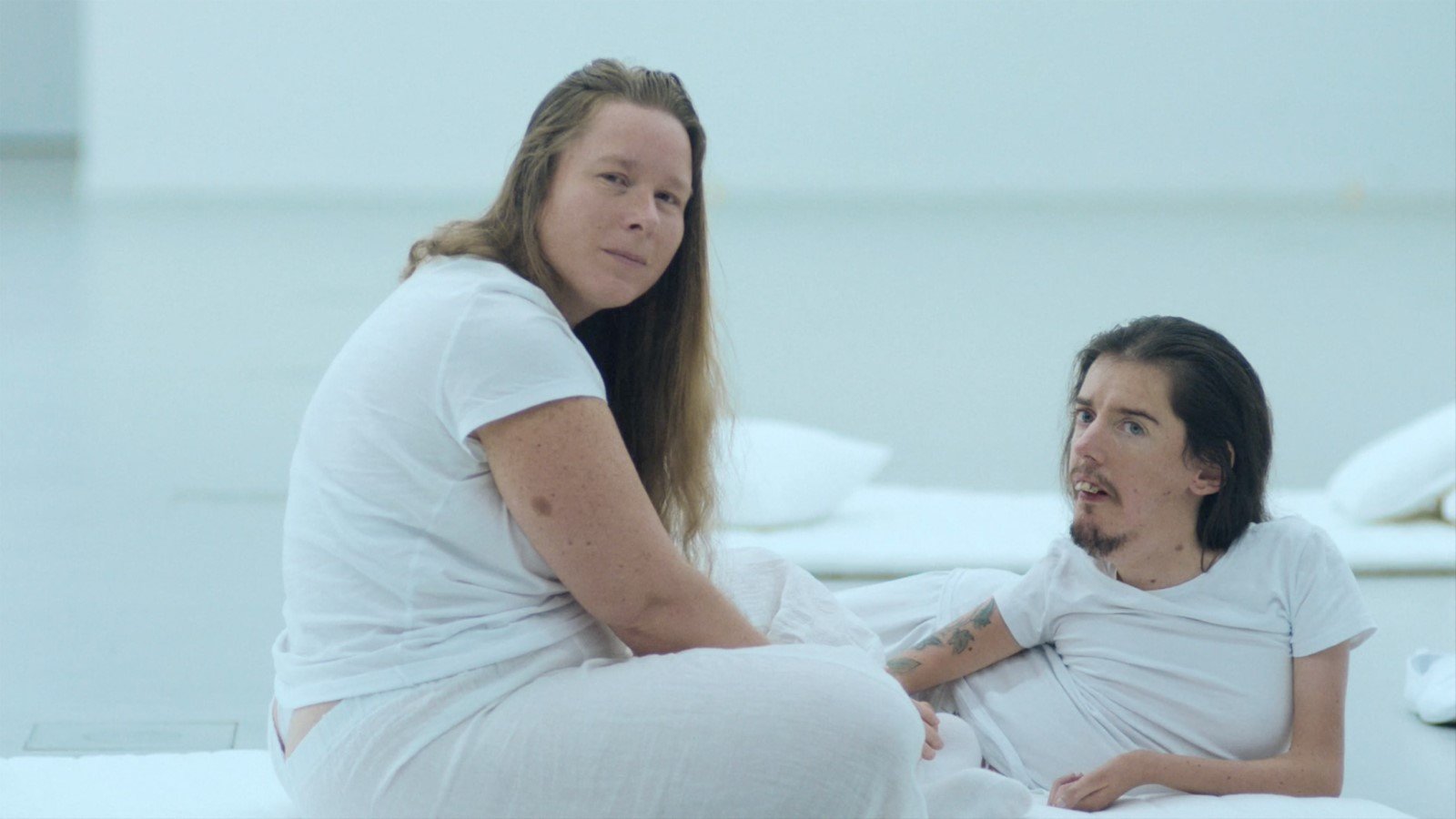 In parallel, there is Christian Bayerlein, a man with spinal muscular atrophy who cherishes his penis because it’s the only body part of him that still works. He is married to a ‘normal woman’ and gracefully conveys his philosophy on sexuality and intimacy. Christian’s interviews are definitely the most memorable aspect of the narrative. He explains how he grew up wondering that he was ‘a brain being carried out without a body’.

In his later years, he has tapped into his self by comprehending the sensual pleasures of his body (he puts his epiphany like this: “The body is a gift, and life is a journey to experience that gift”). Christian’s views genuinely challenge our notion of beauty, body-image, and physical disabilities. The other primary character is Tomas (Icelandic actor Tomas Lemarquis) who has no hair or eyebrows – a result of Alopecia. Clad in white, Tomas is paired with Christian in the body-acceptance therapy which unfolds in a clinical hospital setting.

In one of the narrative’s meandering course, Tomas stalks his ex-girlfriend and follows her to a kinky sex club, where strangers gather under strobe lights to fulfil their fetishes which include a girl writhing around in rope as a man goes down on her. On one occasion, it is suggested that there’s nothing weird in sex. But the idea of finding catharsis and sexual liberation in a fetish club not only seems fatuous, but also contradicts the narrative’s prior delicate observations on sexual frankness, emotional literacy, and intimacy.

I was confused by what Adina Pintilie is getting at through the sex club sessions: Does she remark that in a society plagued by preconceived notions about sex, physique or self-image, it’s therapeutic  in accepting the kink (of course, it is not kink but alternative sexualities, going by the film’s view)? Moreover, it’s bewildering to see talks of intimacy and body-image, only to associate it with images of fetishism and sadomasochism.

It is to the director’s credit that none of these sexual acts or nakedness is portrayed in an exploitative, provocative manner as seen in the shocking works of Gaspar Noe and Ulrich Seidl. Adina’s empathetic and compassionate gaze remains intact throughout the narrative, providing this protracted psycho-sexual journey with an earnest vibe. The shallowness of Touch Me Not, however, is heavily felt in the sequences Adina appears in the film as herself (and largely appears as a disembodied face in a monitor), questioning Laura Benson on her self-exploration. These overloaded fourth-wall breaking scenarios don’t offer any greater insights. Staying true to the characters’ emotional and sexual stagnation, Pintilie’s aesthetics are severely ascetical, and the atmosphere so sterile and dry that it induces feelings of suffocation.

For all its superficial and scattershot narrative layers, Touch Me Not (125 minutes) does offer an intriguing discourse on how the society and its moral norms adversely affect the relationship humans have with their own bodies.

Touch Me Not [2018]: ‘TIFF’ Review – A Flawed yet Oddly Interesting Therapeutic Essay on Openness and Intimacy