Gabbeh or a magic carpet in the oriental imagination is the traveler’s joy, the means to navigating the far and unknown. In Mohsen Makhmalbaf’s film (the first in his ‘Poetic Trilogy’), it is a Gabbeh that an old couple stumble across, floating on a river, which sweeps us into lands lined by cascades of clear waters and a collision of colors. Rippled by variegated hues of blue as diverse as shades of sky meeting the horizon, this carpet featured a horseman carrying away his girl across what seemed an endless highland.

This enigmatic carpet is made incarnate in the form of a wayfaring young girl (Shaghayeh Dojodat) of the Qashqai tribe, who enumerates in evocative tones sequence of events before they actually happen. Here, providence and phenomena intermingle in a cabalistic whirl that almost always drifts back to a domain of familiarity. There is a mild intoxication in its ether which remains essentially tranquil, save the occasionally charged spirits of the nomads, which enables us to sink into the blissful somnolence that accompanies a beautiful dream. 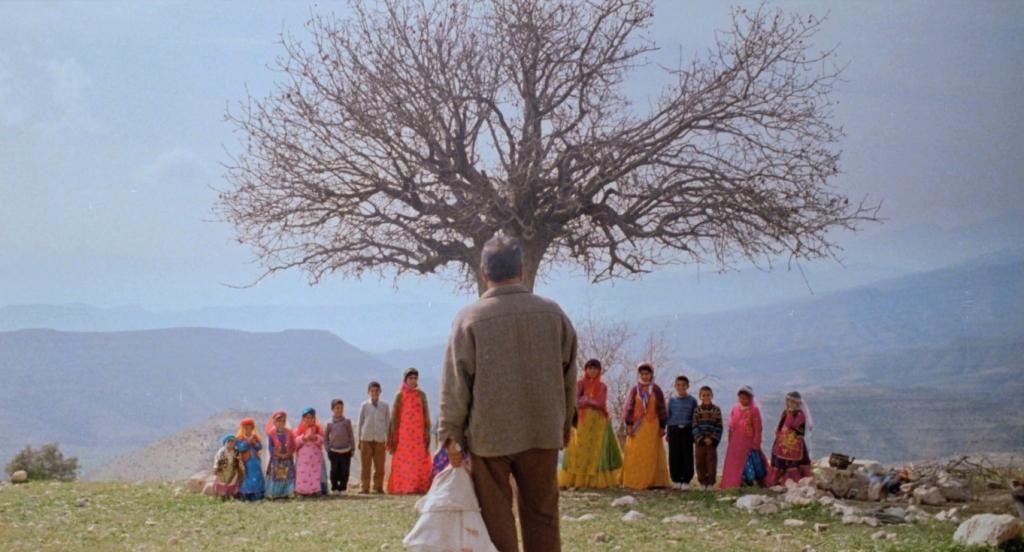 Gabbeh’s self-fulfilling clairvoyance is translated verbally in poetic philosophy; her prophecies prove true, but she seems largely an invention of fancy. The close-up shots loom on her soulful lineaments, as they converse, with the lady holding her shoulders; a simultaneous distant shot is a revelation that she is invisible as the lady rinses the Gabbeh. Intriguingly enough, Gabbeh stands mirroring the woman, who is decked in the very same royal azure apparel as her, manifesting, perchance, her own reflection in another temporal dimension, as they sit poised against running waters, insinuating the elusiveness of time.

Related to Gabbeh: Valerie and Her Week of Wonders [1970] Review: Into the Dark Subliminal Hamlet of Adolescence

A horseman beckons her by his howls that echo searchingly through the vales. However, their communion gets stalled indefinitely. On the other side of the terrain, a nomadic school is shot to visibility where ruddy-cheeked children are being taught out of doors. They run about representing nature in a state of flux, while Gabbeh, sedate in her meditation, spins the yarn of fate. Here, color is twice as bright: luminous drapes and rugs that are bound to scald your eyes, khaki turfs that draw you in. This is a hunt for love, an eye contact with a prism of possibilities, a brown study amidst the plush contrasts of their rugged environment.

Gabbeh awaits the return of her uncle, who rehearses the nomad children on understanding nature in its flecked perfection, with the intent to touch upon self-realization. He makes mystical gestures summoning the red poppies and yellow wheat as if to grasp them in the palms of his hand, and he does, as he holds a speck of flora before their eyes. His hands return tainted in a hypnotic camouflage when he endeavors to pick the cosmic and aquatic gleam. The deep blue, betokening the boundless elements of sea and sky, is reminiscent of ‘minoo’ or the Persian poetic word for ‘heaven’, where the blissful disciple looks up during prayer. Gabbeh’s revolving realm is thus a realm of restorative spontaneity, divine retrospect and spiritual sublimation.

Gabbeh’s nomadic tribe has its roots steeped deeply in nature as manifested by the ever-evolving tree which she calls “the symbol of [her] family”. As children of the earth, wind and trees, they signify in their cohesion a connectivity that is both universal and personal.  Their reunion in proximity to the ‘tree of life’ is a reminder of their ancestry and rebirth, interdependence and filial piety.

Gabbeh fuses and aligns simple realism and folkloric dream in a balance of intuition and cognizance, perkiness and solemnity. There is a sacred hearth in community, peace in simplistic living, a fulfilling harmony in love, a beginning in an end. It is where the memory is ripe and youth is flooding down through crags and dales, to repose in divine proximity and eternal duration, which Iranians call the ‘baqa’. Here, memory is constantly being rewritten and refurbished by word of mouth, a continuity that will live through the images knitted into the hessian rugs. New threads are superimposed upon existing threads, like stories piling up and memories overlapping, people chancing upon each other at crossroads. 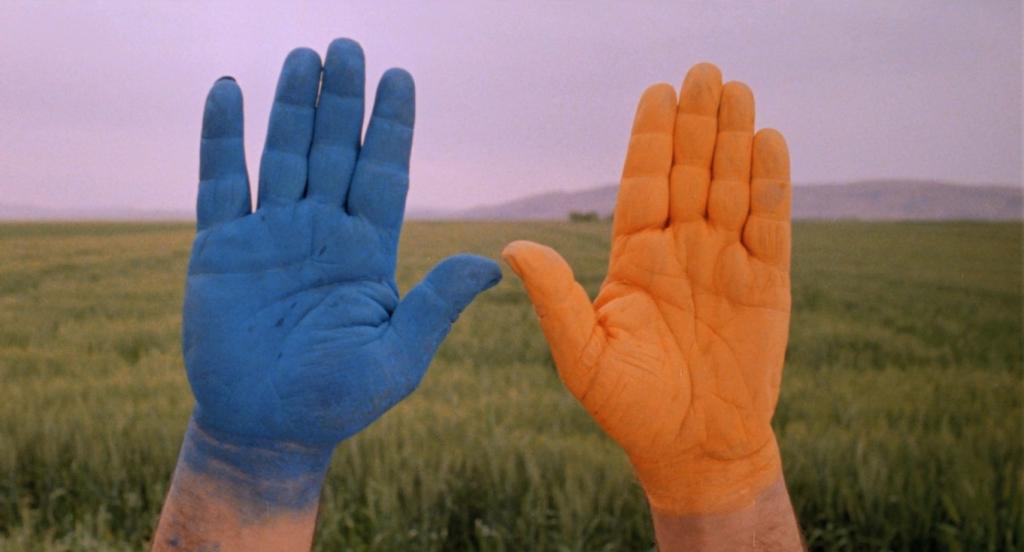 Makhmalbaf gifts a garnished visualization with rich indigenous acoustics that makes sure the senses co-ordinate (as colors interact to give birth to other colors) to fully perceive its overwhelming pantheistic quality. Gabbeh (1996) is an ode to life and its iridescence the same way The Silence (1998) is a prayer for harmony. Heavily inundated in Sufism, they loiter in sunlight symphonically to the beat of the human heart.

Subtlety and clarity coincide in strange ways, and tickle the consciousness with glimpses into lyrical divinity. Dhawq, or unmediated “tasting” of experience, which is the core of Sufi philosophy, becomes the ultimate actuality.

Also Read: The Cow [1969] – A Pioneering Masterpiece of Iranian Cinema 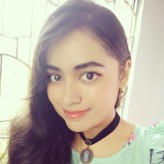 Fun loving couch potato who writes, reads, paints and does everything introverts generally do.

A Perfect Day for Caribou [2022]: 'Locarno' Review – An Oddly Touching Drama with an Interesting Mix of Dry Humor, Absurdism, and Melancholy