It’s tricky to express one’s views on Ajay Bahl’s Section 375 (2019) without giving anything away. However, I shall try my luck. I caught the movie, almost a year after its theatrical release, expecting nothing more than an engaging thriller. What I was not expecting was how it achieved in making pertinent arguments without taking any sides. One does not expect a mainstream Hindi movie on this sensitive topic with a tagline – ‘Marzi ya Zabardasti’ followed by a question mark, to do that. So, I had my share of apprehensions. To my surprise, there was nuance to the story.

The plot is not too complicated on the surface. A renowned film director is accused of rape by a lesser privileged costume designer on his film set. The rest of the story unfolds layer by layer in the form of courtroom proceedings between public prosecutor Hiral Gandhi (Richa Chadha) & the defense Tarun Saluja (Akshaye Khanna).

Section 375 (2019) puts on display, the usual tropes of a courtroom drama – live demonstrations, surprise witnesses, the missing but crucial evidence & heavy dialogues, to great effect. The biggest feat of the film is that it manages to do so without making caricatures of both the victim & the accused. The movie is never politically incorrect, for instance, the defense never resorts to character assassination of the victim to make his case.

There is depth to the case in discussion and it keeps you guessing what actually went down. Ever since the movement gained momentum, there has been a lot of conversation about the aftermath of the allegations. The need to have an organized movement has been stressed time and again by the proponents, and the very lack of one has been ridiculed by naysayers.

The film provides no answers to this but does go down to explore the sensitive territory of the layers of harassment in the workplace, and what might or might not constitute it. What didn’t quite work for me, were the graphic scenes regarding the incident in question. Since there were multiple versions of the incident, watching each one play out was disturbing, to say the least. 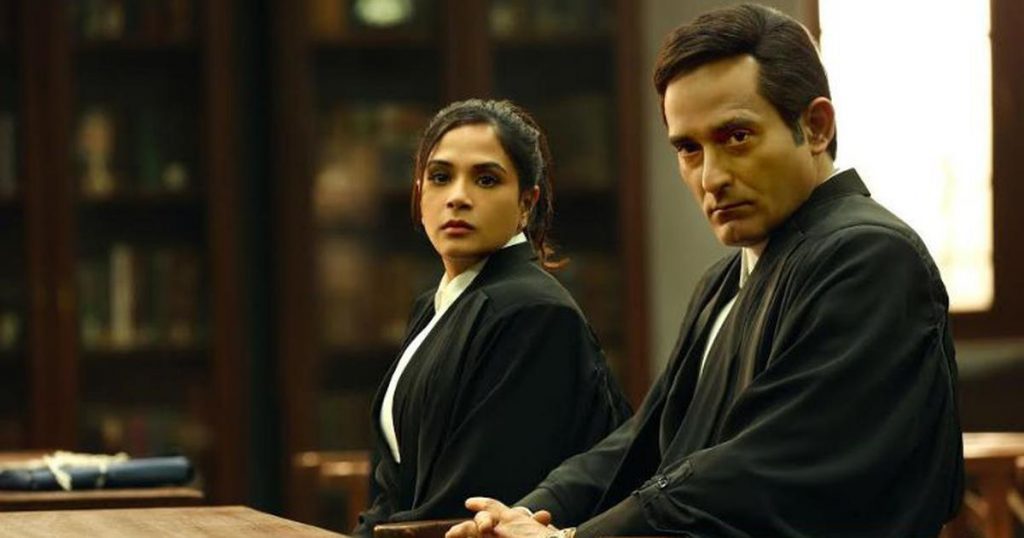 About the performances, Akshaye Khanna as the constantly sneering defense lawyer is at complete ease & seems to be having a ball. Section 375 (2019) is a reminder of why we need more of him on our screens. It helps that his character has the most screen time & gets all the necessary background. In an initial scene, Khanna’s character explains why he’s taking the accused director’s case – to fund his pro bono work for the lesser privileged, immediately absolving him of any wrong. In this, we get a self-aware central character with a solid arc.

The same can’t be said about Chadha who tries to make the most of her underwritten part. We never get to see her outside court. There is one scene between the two that tells us Hiral & Tarun were once colleagues. But apart from that, the righteous rage of the character is not effectively given the depth it deserves, especially in the hands of a powerhouse like Chadha.

Apart from the leads, Rahul Bhat & Meera Chopra in their respective roles of the accused & victim do a convincing job. A word also for Kishore Kadam & Kruttika Desai, who as the two-judge bench presiding over the case, put in their A-game.

Personally, I love movies that make for great post-watch conversation. Section 375 (2019) ticked all boxes needed for that – grey characters, arguments on the use & misuse of laws made to protect women, the power dynamics involved in workplace harassment; and what will & consent actually mean.

The last time a film on a similar topic started conversations was Pink in 2016. Only three years later, times have changed – this is the post #MeToo era. One might argue that the first film associated with this movement need not have been one which raises questions. One might also argue that the Indian audience isn’t ready for this kind of nuance. As for me, Section 375 makes for a compelling watch, regardless of what your opinions on the movement might be.