﻿Jeff Rutherford’s feature-film directorial debut A Perfect Day for Caribou (2022) carries the spirit of Jim Jarmusch. On the outset, it seems to be telling the tale of an estranged father and son. It is set in the vast, rural region of Mid-West America, and somewhere in the 1990s when people used brick-like mobile phones. However, the gorgeous monochrome cinematography (by Alfonso Herrera Salcedo), dry and deadpan humor, the intersection of mundanity and a dreamlike feeling, and finally the portrayal of lonely humans awkwardly pursuing their need for connection kept reminding me of different Jim Jarmusch works. At the same time, it’s far from being an imitation.

Jeff Rutherford crafts a beautiful portrait of two people struggling with personal failures, deep-seated fears, and isolation. He neatly strikes the balance between irony and sympathy. The earlier lays bare the characters’ shortcomings, while the latter makes us feel for them despite that; probably because their vulnerability, inability to communicate and self-loathing feel very human. It’s also interesting for the film to carry the name of the animal that’s endangered in North America and elsewhere. Caribou is also known for its phenomenal migratory patterns – something which gradually bestows upon us a layer of meaning, in relation to the narrative. While it took me some time to get adjusted to the mid-way shift in the narrative, it sort of makes sense in the end and could get better in a re-watch. 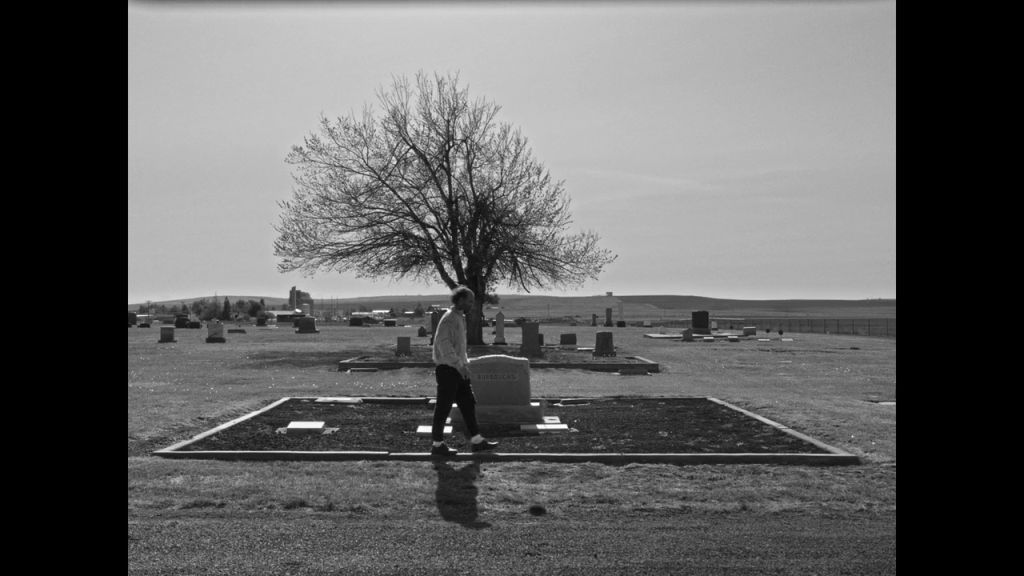 A Perfect Day for Caribou unfolds in just over a day in the rural wilderness. It starts and ends in a vast cemetery. But the camera also moves through dense forests, hills, and open plains. The stroll through different landscapes is juxtaposed with the central father and son characters reluctantly and intermittently navigating their emotional scape. Herman (Jeb Berrier) is an alcoholic, an absent father, and an elderly man who hasn’t been able to hold onto anything in life.

When we first see him, he is sitting inside his truck, recording a tape for his long-estranged son, Nate (Charlie Plummer). Herman has lost the appetite to live. His partner, Tracy has thrown him out and Herman is moving around in the truck he stole from Tracy which is filled with all his belongings. Before killing himself, he wants to leave the tape to Nate. It’s the last wish of a father who doesn’t want to be remembered by his son only for his absence. The story as well as Berrier’s fine low-key performance reminded me of Bruce Dern’s character in Alexander Payne’s Nebraska (2013).

Jeff Rutherford establishes his minimalist and tad quirky narrative framework, while Herman delivers his taped monologue. The human mind works in odd ways, especially when it’s burdened by loneliness and depression. The way we express ourselves in such occasions can be very scattershot. It’s how Herman recalls his life experiences through seemingly random events, pertaining to his own abusive father, a failed marriage, his newfound predilection for making paintings, and the Caribou.

Herman’s verbal recollections are visually interrupted by an image or two from his memory. The memory image is also as static as the character’s reality. Sometimes it’s not even a memory, but words that have metamorphosed into a visual, thanks to one’s own imagination. For instance, Herman talks about the instance when his wife wanted to ‘set him on fire for cheating’, which is followed by an image of a burning figure. That heaviness of memory and words (our own personal history) is deeply felt throughout Herman’s fragmented narration and later too.

Herman suddenly receives a call, surprisingly it is Nate aka Nathaniel. It’s been more than a decade since their last meeting. Nate arrives at the cemetery, accompanied by his little son, Ralph (Oellis Levine). His wife Sandy is working at the WinCo. Nate now works as a janitor in the same school he went to. Ralph suffers from a kind of disability that’s yet to be diagnosed. The kid wanders around the cemetery, stuck in his own world without the means to express himself. It’s not much different for adults. We gradually learn the details of Nate’s life and about his failing marriage or the anxiety of being a young father. But the initial communication between the father and son is anything but awkward. Like any rendezvous between an estranged parent and child, the bridge of conversation is tentatively built above the stream of uncomfortable silence.

They talk about trivial things before moving to confess the emotions and conflicts that are ailing them. Of course, the father and son maintain a stoic facade, still wary of showing each other their vulnerability. After a while, Herman and Nate notice that Ralph has run off somewhere. This sets off an unusually long stroll through the wilderness. Nate gives Herman a box that he found in his mom’s home with his dad’s name on it. Herman carries it with him as if that box is literally his emotional baggage of being an absentee father.

A Perfect Day for Caribou uses a simple narrative set-up to contemplate different aspects of human life. It’s a film about new beginnings. One father self-doubts his ability to take care of his son, whereas another father comes to terms with his guilt in failing to protect his son. There’s lots of inter-generational trauma and inheritance in the form of physical disabilities. This one particular afternoon in Herman, Nate, and Ralph’s life might not change their perception totally. But in the image of young father and son, basking in the waning sunlight there’s some hope. And the old father might cling to his life, even though he is sitting alone in the dark forest and pointing a gun at himself.

A Perfect Day for Caribou is also a film about love and companionship; our yearning for it and our inability to express it. Like an endangered Caribou that has lost its herd, Jeff Rutherford shows us the social animal called human, suffering in isolation. As I mentioned already, it’s all observed from a detached gaze that zeroes in on the absurdity of the situation. Rutherford keeps almost everything in his monochromatic world in sharp focus.

The stoic face and bodies of these characters seem to align themselves with the vast yet inert atmosphere. Therefore, the moments when they try to express themselves and connect with each other, either leads to dry humor or a touching moment. One humorous instance I enjoyed was the father and son coming across a painfully lonely female hunter (Dana Millican) in the woods. There’s also the oddly touching scenario, when the three generations of males, stand in the shape of a triangle and pass the ball to each other. It was a transient yet momentous image, showcasing the connection between each other. 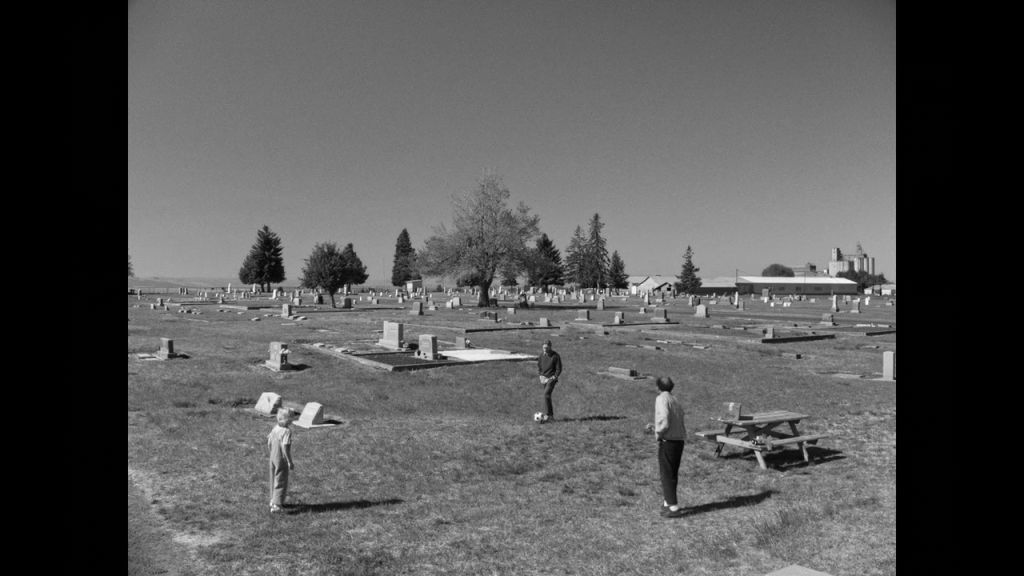 Eventually, A Perfect Day for Caribou could be seen as a film about escape. People want to escape from the heavy cages of their memory and loneliness. Nate wants to escape from his own fears of a dreadful future. Moreover, we witness a literal escape of a prisoner in the landscape. In that way, I feel the film unfolds in both the metaphorical and real plane. It could largely because of how Rutherford guides us through this uneven landscape and uneven communication. At the same time, the filmmaker gracefully balances between the absurd, the symbolical, and the real.

Overall, A Perfect Day for Caribou (95 minutes) is a calm and restrained film that deals with the themes of fatherhood, memory, identity, loss, and love. There’s profound sadness and beauty here which permeates each of its static frames.

A Perfect Day for Caribou Trailer