Thirteen Lives is based on a miraculous true story that took place in 2018 Thailand, also known as the Tham Luang cave rescue, where a group of 13 people – 12 children and their football coach found themselves trapped inside a flooded cave for three weeks. The incident is fairly recent, and has been covered twice for the screen – in Feras Fayyad’s 2019 film The Cave and last year’s documentary from Academy Award-winning filmmakers Elizabeth Chai Vasarhelyi and Jimmy Chin. In this retelling, directed by Ron Howard (Apollo 13, A Beautiful Mind), the incident gets a thoroughly detailed, chronological view of the operation that took place in that frenzied situation.

Although most of the details are quite expansively covered, Thirteen Lives is elevated with a sincere script that favors realism over dramatic reinforcement, and fine performances from its multi-starrer cast – which includes Colin Farrell, Viggo Mortensen, and Joel Edgerton.

Howard takes a few liberties but mostly remains faithful to the original incident that took place. In Thirteen Lives, there are no heroes or saviors – each one of them is trying to look at the impossible circumstances and make sense of it.

The rescue operators, divers, doctors, along with the governor are unified with the common mission of bringing the thirteen people back from the cave. There are plenty of visually stunning sequences inside the cave, half submerged, presented with recurrent themes of survival and ethical consciousness. The two-hour-long narrative demands an in-depth look to trace the details that you must have missed while watching it.

Read ahead to get all the answers to the questions that lingered on. If you haven’t watched the extraordinary film yet, I request you to be wary of spoilers. Happy reading!

Thirteen Lives begins with a sense of impending doom when a bunch of soccer players, all of them children, along with their coach ride carelessly along the road towards the huge cave. They keep their cycles on the stand near the entrance and move inside. It rains heavily for the next couple of hours, and the water trickles down the cave with such ferocity that the boys find it impossible to come out.

Back home, their parents start to panic, and the news spreads fast. The Governor Narongsak Osatanakorn (Sahajak Boonthanakit) and General Anupong Paochinda (Vithaya Pansringarm) arrive, and deploy men to come with a quick rescue plan. As the situation escalates with unending rainfall and no solution in view, international help is called for. It is here when British divers Richard Stanton and John Volanthen, played by Viggo Mortensen and Colin Farrell respectively, arrive. They finally locate the kids trapped at the far end of the narrow, serpentine cave, an unimaginable task to cross, let alone bring back not one or two, but thirteen living souls.

The Danger of bringing back the boys from inside the cave

“If you try to rescue them what you will bring out are dead bodies.” The local Thai inhabitants of the place help the team to stop the percolation of rainfall inside the cave by locating the sinkholes on the top. Pumps are installed within the cave to fetch out the water from inside. Yet the danger remains. The oxygen count inside the cave decreases rapidly, spreading panic, with international media coverage all around.

How can the team, in wetsuits and oxygen cylinders, ensure that all of the trapped individuals make it outside alive? That would mean additional cylinders, since the time clocks at almost two hours to make it out from the farthest end of the cave. It is here where anesthetist Richard Harris (Edgerton) comes up with the devised plan of sedating the boys so that they do not use far more oxygen in a hyperactive state. But will this work? What are the chances of such an operation that has never been tested before?

The plan of action: Do all the boys survive?

In executing the plan, the team also loses one of their diving members. Yet, there is no other solution that is available with the rising pressure. If anyone of them dies, they will be the ones to blame. The parents are not given any details of this procedure, and all details are kept limited to the rescue team members only.

One by one, with immense control and precision, they cover a nearly 2-mile distance passing through narrow crevices, to bring back each of the boys in a sedated state.

Triumph of the human spirit:

At the core of Ron Howard’s fictionalized account of this true story lies the inevitable triumph of the human spirit. In the face of such an impossible situation, it is the determination shown by the rescue team members, combined with the hard work and faith of the official staff and board members, that such an operation came to gratification.

The local community came together- their contribution finds importance in William Nicholson’s script, where they agree to flood their cultivated lands for the pumped-out water to be moved. There is no division between the people, they stand united together for one cause. 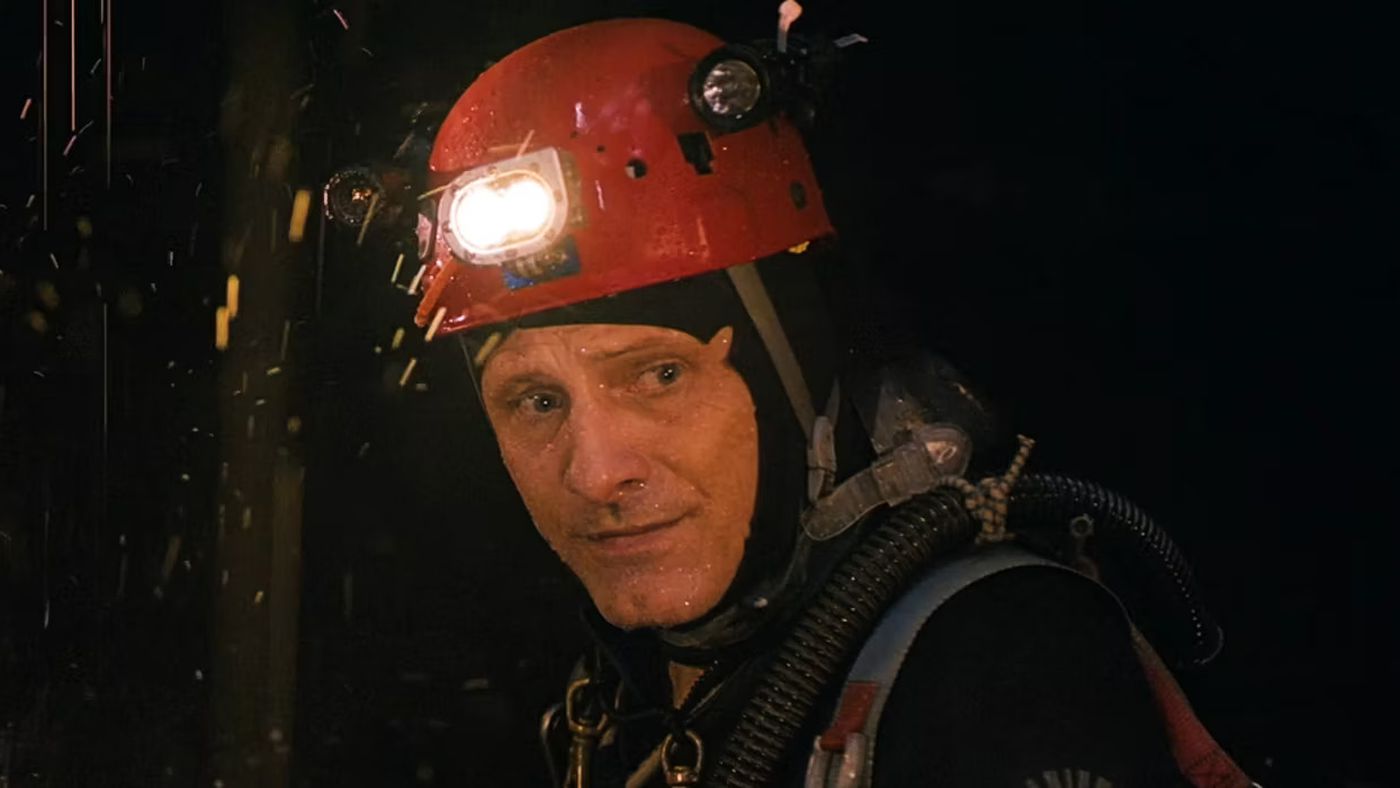 Mortensen’s character takes no pretense of having formed any inclination towards luck and prayers for saving the children from the cave. The men are objective and level-headed in their choices and circumstances, which stands in sharp contrast to the local community who pray to the mountain God for salvation from sins committed in the past.

The relevance of spiritual faith is immense in the Thai community, which binds them together. They pass on red strings to be tied on the wrists of the rescue team for bringing luck and protection- even though Stanton sides it away immediately. He dismisses any kind of superstitious belief and believes in acting rather than hoping. Either way, Howard simply keeps that dilemma open-ended for his audiences to situate.

In the deeply moving, edge-of-the-seat final thirty minutes of Thirteen Lives, the collective team of rescue divers, instructors, and crew members go through a physically and mentally exhausting process of reaching the spot where the thirteen boys are stuck inside the cave.

They put them in a wetsuit, holding the oxygen cylinders, sedating them, and bringing them back to the entrance – one by one. Shortly after the rescue mission is successful, Harris learns that his long-suffering father has passed away. The film ends on a note of relief and ecstasy, as one of the boys celebrates his birthday with the rest of the group, and Stanton & Volanthen return back to their respective homes.

Howard’s film could have easily fallen under the white savior stereotype, but it does not. Thirteen Lives moves with confidence and calm, aided by stunning visuals from renowned Thai cinematographer Sayombhu Mukdeeprom, to achieve an immersive look at courage and determination when a community comes together to achieve the impossible.

Where to watch Thirteen Lives

A Perfect Day for Caribou [2022]: 'Locarno' Review – An Oddly Touching Drama with an Interesting Mix of Dry Humor, Absurdism, and Melancholy