Home»Reviews»Films This Week»Dunkirk [2017]: Nolan Transports You Into a Catastrophic War and Brings You Home
Films This Week/Reviews

Director Christopher Nolan revisits all his usual obsessions — time, existential fear, loss of humaneness, and even love. What sets this one apart, elevates it, is a clinical restraint that he hasn’t shown before — his latest doesn’t mess with your mind all that much, but goes straight for your soul

Dunkirk [2017]: Nolan’s magnum opus transports you into a catastrophic war and finally brings you home.

When you watch Dunkirk, almost spontaneously, your mind draws parallels to so many moments from all of Nolan’s previous work. Yet, at times, one doesn’t feel like one is watching a Nolan film at all. All the grand distractions and narrative puzzles that brought him to fame are gone; what remains is his incisive insight into human behavior and emotion, and a steely idealism — for cinematic form, for the 70mm format, and for his Nation.

Brief opening titles just about introduce you to the situation; they tell of the ‘enemy’ that is closing down from three sides and the British and French forces stranded by the sea on the other. The film doesn’t spare you a moment to settle in. It begins bang in the middle of frenzy (that never really leaves you), with a young soldier (Fionn Whitehead); the viewer perhaps feeling as disoriented as him. He looks above into the clear day sky, there are pamphlets raining in. These are dumped by the enemy, a map showing the allies (marked out as ‘You’), exactly how precarious their situation really is — a kind of threat that is as effective, or even more, than death itself.

One only slightly begins to take this in, and bang! There are invisible bullets whizzing past, soldiers dropping dead. There is no time to think, to process, to absorb. There is only terror, and one needs not to look to know it’s there. One can simply hide, duck and run, run for dear life. That is what Tommy (Whitehead) does, reaching the allied barricade quite sooner than expected and then soon enough, the shore — he’s one among the 400,000 men waiting to go home, for deliverance, dying multiple deaths in their endless wait. 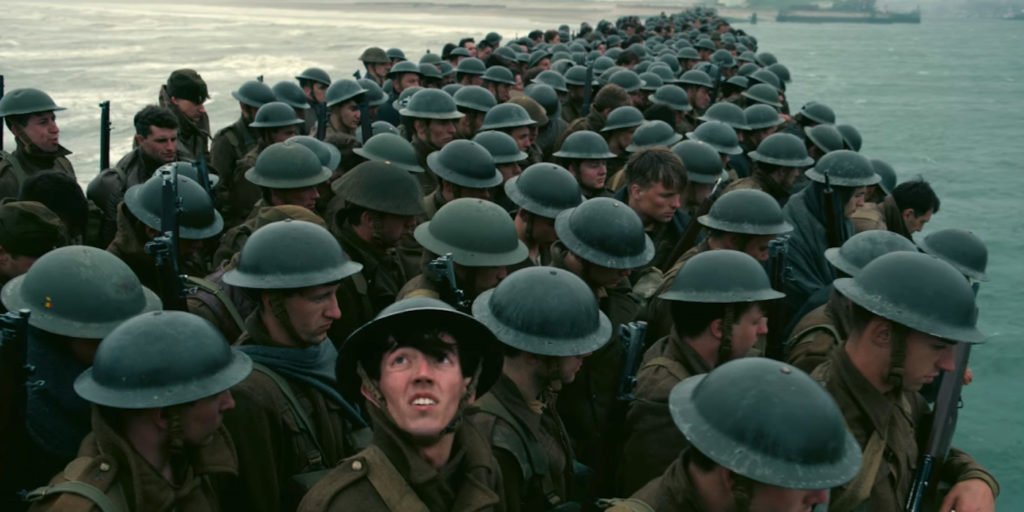 Hans Zimmer’s traumatic score constantly buzzes away in one’s ears like a ticking time bomb. The music runs seam to seam from the opening second, save for a few hopeful moments of respite towards the end. It completely stops still for a few glorious seconds when finally Tommy is on the train back home, at last not afraid to shut his eyes. The sound design is impeccably responsive to the volume of the images on the screen and makes that experience that much more visceral and real. The large format images live up to all the hype and more — both in dazzling landscapes and poignant close-ups.

The aerial IMAX shots of the fighter plane sequences atop the endless sapphire waters are a work of wonder. They leave Nolan’s previous grand iconography from ‘Inception’ and ‘Interstellar’ miles behind. Moreover, the portrayal of in-air combat feels clinically realistic both in the sky and from ships below — there are no big bangs and explosions, all it takes is a few (impossible to time) well-aimed bullets to bring fighters down. The last time Nolan had Tom Hardy up in the air in ‘The Dark Knight Rises’ it was a great adrenaline rousing show and now again it is just so much better. Hardy again is speaking through a mask, go figure.

One never really sees the enemy soldiers in their physical form throughout the film, but their dread is ubiquitous. Bullets, bombs and aircrafts can drop out of nowhere and they almost always certainly do. Just as the soldiers by the shore wait, there are battles taking place elsewhere. Up in the air, the limited British planes fly around to avert the Axis bombers from sinking the returning ships. At the home-front, there are civilian ships in all sizes and manner that are called upon to aid the rescue. The British cannot risk more vehicles than are already lost in Dunkirk and thus the retreat is a very thrifty matter.

The narrative ingeniously picks out representatives from each scenario and focuses on their individual stories, which then reflect the larger picture. Fionn Whitehead is the young private, along with a very nice debutant Harry Styles; Hardy the pilot; Mark Rylance is the old civilian with a son lost in the war, who sets off from home to hell to the rescue; and finally Kenneth Branagh the commanding naval officer who has to remain hopeful when there is none. None of the performances falter and are democratized in the manner war does human life. The most effective though is of the young Whitehead, whose character we do greatly empathize with.

From the get go all he really wants is to find the way home if that means cutting lines and hiding from his own men so be it. He is terrified, yet brave and honorable but also selfish. When a bunch of British soldiers seek to sacrifice a French counterpart (“frog”) to better their chances of survival he stands up to them. But when asked to take his place, he retorts, “It’s not right, but I can live with it (the Frenchman’s death).” Like many others in the film, his is the kind of unsure bravery – the only kind one could expect in the situation. Yet there are some who sacrifice themselves for the greater good. 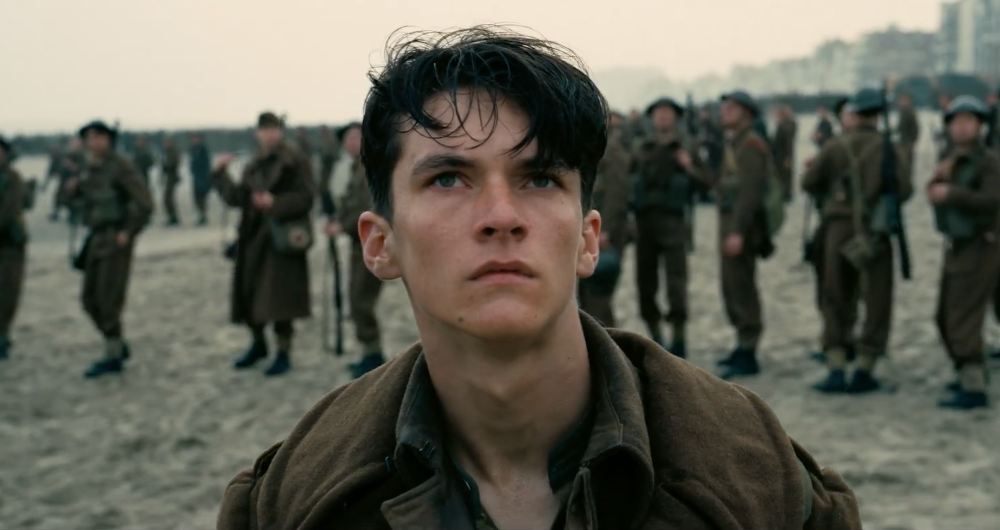 The plot is stitched together in a slightly toned-down Memento-esque fashion. One gets the impression that everything is happening simultaneously at different locations but the film is actually cutting back and forth in time, for all the different events to ultimately, beautifully converge together. There are some outrageously funny moments; at the start, Tommy collects a handful of those propaganda pamphlets in order to take a dump. A soldier who is rescued from certain death by a civilian ship finds out that they’re sailing right back to Dunkirk. But one’s nerves are so completely on the edge throughout that one can only chuckle silently, in one’s own head.

Dunkirk is about time and hope running out, and Nolan never lets you forget that. Every now and then, one is tricked into hoping but immediately has that hope pulled out from under. So, when hope finally does arrive, you least expect it. The film gives a fascinating insight into the crippling and decaying effect fear can have on the human mind and yet it also maintains that our love for each other, albeit not always, can still shine through and hold us together.

With every war, as in life, there are myths, and so is the case with this film. It is even self-referential to that effect. A young boy who dies accidentally even before their civilian ship reaches Dunkirk is later immortalized in the newspapers as a hero. A man who is welcoming the soldiers back at the home port with refreshments says “well-done” to each and every one of them. Tommy says “but we only survived”, “that’s enough”, says the man. Later Style’s character complains how that man could not even bear look them in the eye; turns out he was blind. The soldiers are terrified of the National shame and anger they are going back to, but instead, they receive a hero’s welcome.

That famous line from ‘The Dark Knight’ comes back, “Sometimes the truth is not good enough. Sometimes you need more. Sometimes people deserve to have their faith rewarded.” Nolan’s masterly war myth is very rewarding indeed and it will survive the test of time.

Rutwij Nakhwa is Writer and Assistant Film Programmer at On Global Screens where he has been working closely with seasoned film programmer and journalist, Uma da Cunha. He has also contributed articles on cinema for The Hindu.