Playing the game of telling and deceiving, the new film by Greg Zglinski plays with time, with characters, and with a seamlessly woven mix of genres. A marital drama on the surface, Animals (a.k.a Tiere) in no time becomes a dark-comedy that borderlines Lynchian territory without losing its grasp on the narrative. Keeping an engaging hook on what’s real and what’s a dream, the film always keeps some of its cards hidden.

Based on the script by Jörg Kalt whose untimely suicide kept the film in the cans for 10 years, Animals opens with handsome chef Nick (Philipp Hochmair) and his author wife Anna (Birgit Minichmayr). From the little whispers and confusing imagery that follows, we get a sense of infidelity in the works. One of the neighboring women is also involved. The couple had however decided to take a 6-month long vacation to the Alps, leaving their Venice apartment in the hands of the seductive Mischa (Mona Petri) whose resemblance to Anna is uncanny. 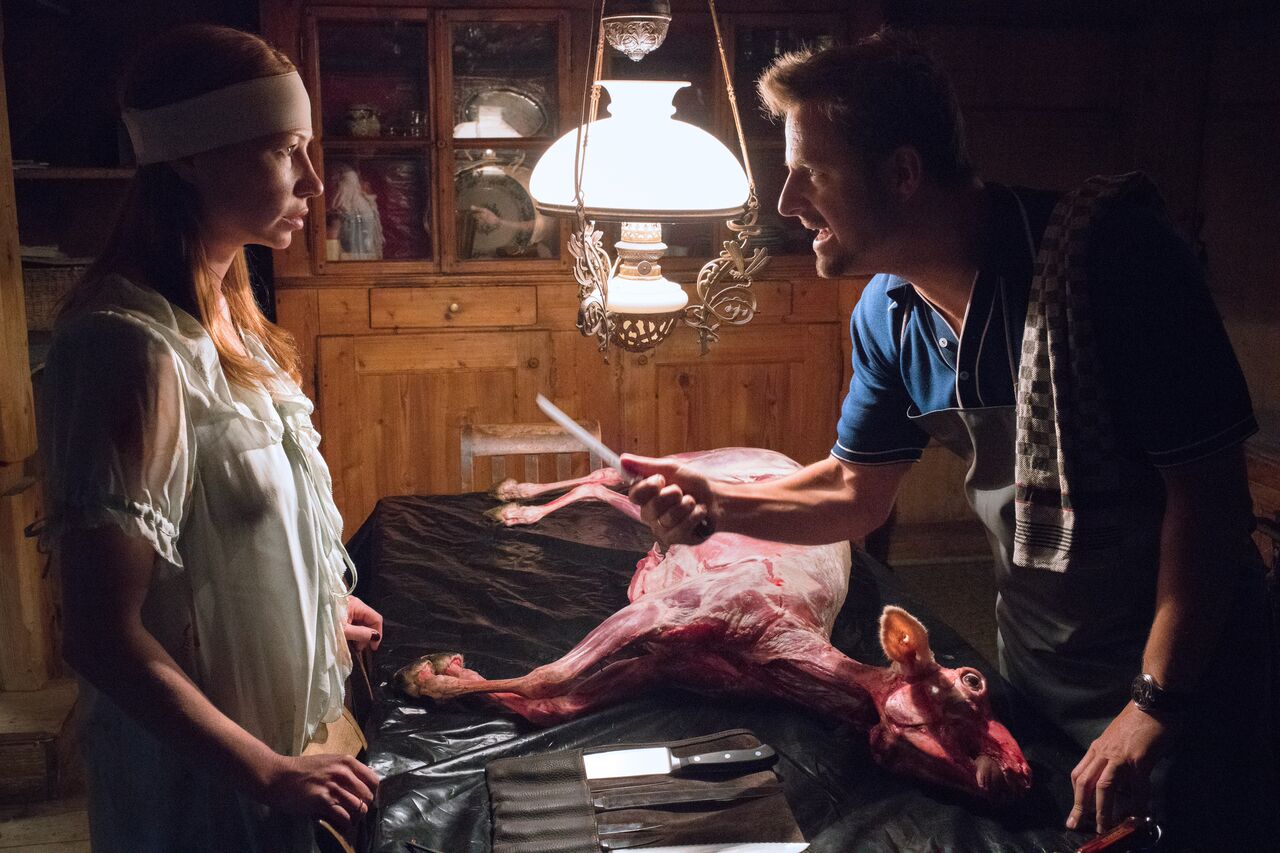 On their way to their holiday home which is also supposed to be a creative getaway for both of them, as Nick has to roam around collecting unfamiliar recipes and Anna wishes to write her first adult novel, they meet with a minor accident. Nick is left unharmed while Anna suffers from a minor concussion that only enhances her previously doubtful eye towards her husband. Meanwhile, Mischa is constantly intrigued by the room at the end of the hall that Anna has warned her to stay away from.

Just when you think you have pieced the film together into a house of cards, Greg Zglinski slowly pulls out cards until your belief is no longer your belief and everything comes crumbling to the ground. Time seems to be overlapping as we move between the house in the Alps to the one in Venice. Anna’s psychological breakdown enhances when a bird (in the most Hitchcockian fashion) kills itself in front of her. She also comes across a cat who talks in French and is quite evidently interested in smoking a cigarette while discussing Anna’s life that is doing a downward spiral. Mischa is facing supernatural foresight when she meets a doctor who cured her head injury and the woman upstair commits suicide.

The film is laced with confounding and confusing happenings. The more you try to keep track of things, the more confusing it gets. The best way to really enjoy the film is to let it get into your head. Once you do that, the film becomes an alluring allegory which starts tormenting one’s psyche. The visual clues between dreams and reality are so tightly nipped into each other that the constant playfulness with time constraints you from judging any further move.

What’s with the door at the end of the hallway? Why is Anna in a constant sense of doubt? Is Nick really the one to be blamed? Does the cat speak the truth? Does anyone speak the truth? These are some questions that keep hitting you once and again but director Greg Zglinski’s notorious new film is a puzzling and delicious suspense thriller. It doesn’t believe in answering your questions, rather it gives you infinite possibilities that allure you into an engaging and dreamy narrative. One that doesn’t leave you even when the credits roll.