2021 started and ended with Cobra Kai. Whilst Season 3 was impressive, Cobra Kai Season 4 absolutely topped it up with more of what we have come to love to expect from Cobra Kai. It featured humour, conflict, multiple returns, badassery, throwbacks to the films, (and also past instances in the show itself), and a definite build-up to a future as characters grow older.

The writers really explored the rich Miyagi Verse and provided scope for interpretations of the words of Mr Miyagi. These interpretations showed the growth of the characters- in both senseis and students. The interpretation of teachings/learnings and the concept of acceptance and putting oneself in the shoes of the other is what helps Cobra Kai progress. Underlying messages have played a huge role in this series and Season 4 was no different.

Season 4 picks up on the other side of the phone call John Kreese (Martin Kove) made in the finale of Season 3. Enveloped in luxury, Terry Silver (Thomas Ian Griffith), who is living in a lavish ocean adjacent manor, just cuts the call whilst he continues playing the piano. As Kreese is not so keen on just dropping it, he visits Silver to persuade him to return.

Meanwhile, we see the scars of the events of the LaRusso home invasion at the LaRusso household. There is a new alarm system in place. A plank of wood is blocking the window through which Nate took flight, and Amanda has a baseball bat handy. She describes it as The Twilight Zone– an apt description if one is to consider Silver’s impending chaos. 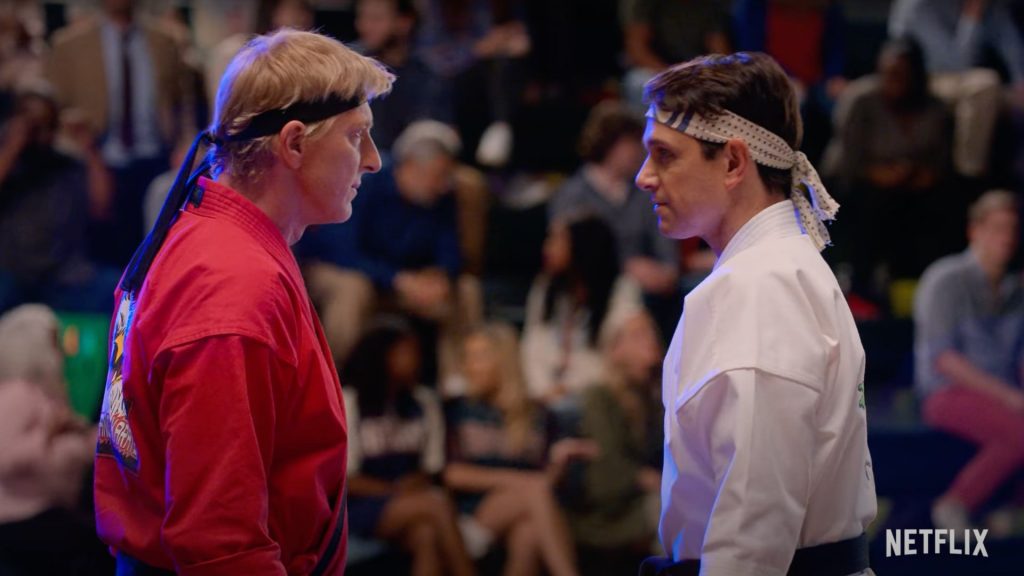 Terry Silver steals the show. His arc was a treat to the audience as he had a philosophy in everything he did. It was he who reminded his co-sensei that he had already struck first and didn’t need to strike back. However, after teasing a Johnny-esque return, the realities were unexpected. Was he really going to back down that easily?

Following the events of The Karate Kid 3 and after No Mercy got rescinded, we realize that it was all his mental warfare. The orchestra in the background score seemingly positions him as the conductor who is pulling the strings and ensuring everything happens as per how he wants it to happen.

It will need a whole army of good individuals to thwart Silver in the next season. However, the villain, through his heinous acts, managed to provide the show with the potential to create numerous good characters. Hence, one can say that Terry Silver just managed to make anyone around him good in season 4.

This may primarily see Tory (Peyton List) complete her arc, as she may not head off to college like many of the other characters. Her scenes with Amanda LaRusso (Courtney Henggeler) provide bonding moments and help bring out the good in her. Helping these along was the direction Samantha’s character took, as she was the big bad in some respects.

Samantha took to Johnny’s offensive training, leapt off a building, took secret training sessions with him as well, and struck first, both literally and figuratively. While the reactions were definitely triggered (and part of the strike back rather than strike first), the change was a welcome one, as it showed that the younger generation wants to carve their own path to life and victory. i.e. even if the said method is not right in the eyes of the other. Samantha and Robby both use this line at different times which can be seen as teases to future turns and potentially more arcs in season 5 as the showrunners could look to squeeze out every last bit of the story from the characters who won’t be under 18 in a few months.

Some regrets that could emerge from Cobra Kai Season 4 were that they didn’t focus enough on the training for the All-Valley Tournament. It seemed as though only Cobra Kai was having lessons. Miyagi Do’s lessons seemed to be absent and the training of Samantha, Demetri, Eli, and the rest was not featured.

Also, with such an ensemble, it may have been tough to squeeze in meaty roles for everyone. Yasmine, Moon, Louie, Anoush, Bert, Nate, Mitch, and Chris were victims of this. They were treated as special guests who were present on screen more than the actual designated special guests. Although Moon was a catalyst for Eli, the rest of the characters just served as recognizable background fillers.

Despite the lack of training time and the relatively short jump from December (the LaRusso home invasion) to May (the All-Valley Tournament); all the students progressed from white belts to black belts. It’s quite bizarre, as earning a black belt that quickly is didn’t seem believable.

Eagle Fang received some sort of training as they had to integrate a new character.

Oona O’Brien as Devon Lee is a character that would thrive at Eagle Fang. Lee comes across as the closest student to the Johnny Lawrence way. Naturally a badass, she references all of his favourite films and he uses her to ‘prepare’ his Eagle Fangs for any dirty tricks. Her manner of speaking in nerd also infuses Johnny’s vocabulary into it to get him to pay attention and understand. She will feature in future tournaments as the young breed along with characters like Nate, Bert, Kenny, and Anthony.

Other characters that will return include Daniel LaRusso and Johnny Lawrence. The duo’s dynamic and progressive realization is amusing and astounding, respectively. In Season 4, the clash of styles between them results in amusing situations, growth, exchange training sessions, and a much-awaited rematch that absolutely took everyone by shock. Well, you weren’t expecting that after the premise and all the sneak peeks, weren’t you?

It’s safe to say that despite the annoying number of teasers and reveals (had such moments been saved, they would have had a much greater impact), Cobra Kai did manage to deliver its fair share of surprises that you wouldn’t have been expecting. Hell, we may even see Kreese as a good guy after he swerves in the finals.

This season didn’t have too many brawls and that may have disappointed fans. However, the two finals truly lived up to expectations and may go down as the best fights seen in Cobra Kai.

Also Read: 9 Movies to Watch if You like Netflix Original ‘Don’t Look Up’

Despite showing things in a good light and positioning itself as a redemption story for Johnny, the show may have moved on to the Endgame; freeing William Zabka to allow him to finish his redemption entirely and let Cobra Kai move from the morally grey area to the black.

This, as well as the younger recruits, could hand the show a new lease of life as Cobra Kai is unbeaten. Daniel beating Johnny would have taken away from the retelling from Johnny’s perspective, so the direction taken is perhaps the best way to thwart Cobra Kai and ensure Lawrence doesn’t lose.

The younger kids could help the show, as we have seen almost every major character, with the exception of Samantha and Tory, officially change allegiances for good. Any further changes by the senior year students in subsequent seasons may have just been termed lazy writing.

I say grey area for Cobra Kai, as it will be tough to see Silver show restraint after his actions, and hence if the enemy wants to wage war (open up a Cobra Kai franchise), the other side will take away their ability to wage it.

All in all Cobra Kai Season 4 wrapped up threads, set up for more karate in the valley, and its 10 episode run had fans craving for more.

Love Cobra Kai (Season 4)? Click here to check out the top 10 Fight Scenes in the show.