Christmas is a long cold night that we withstand by engaging ourselves in trivial activities like decorating trees, cooking turkeys and watching TV in the company of friends and family. Sure, it is a season of joy and goodness, but in the festivity of season, we should not forget those seasons of TV series that kept us going rest of the year, the seasons we binge-watched so relentlessly, they became part of our existence.

Christmas is a long cold night that we withstand by engaging ourselves in trivial activities like decorating trees, cooking turkeys and watching TV in the company of friends and family. Sure, it is a season of joy and goodness, but in the festivity of season, we should not forget those seasons of TV series that kept us going rest of the year, the seasons we binge-watched so relentlessly, they became part of our existence.

From Rod Serling to Dan Harmon, many showrunners have created Christmas episodes. While some episodes touch the standard holiday themes others tackle darker side of holidays such as depression and horror of isolation. From a vast array of holiday episodes, I have selected 10 that resonated with me the most. To make the selection process easier I have considered only stand alone episodes (of TV series) that are about Christmas or set in Christmas. Let me know your favorite Christmas TV episode in comments.

10. How the Ghosts Stole the Christmas | The X-Files 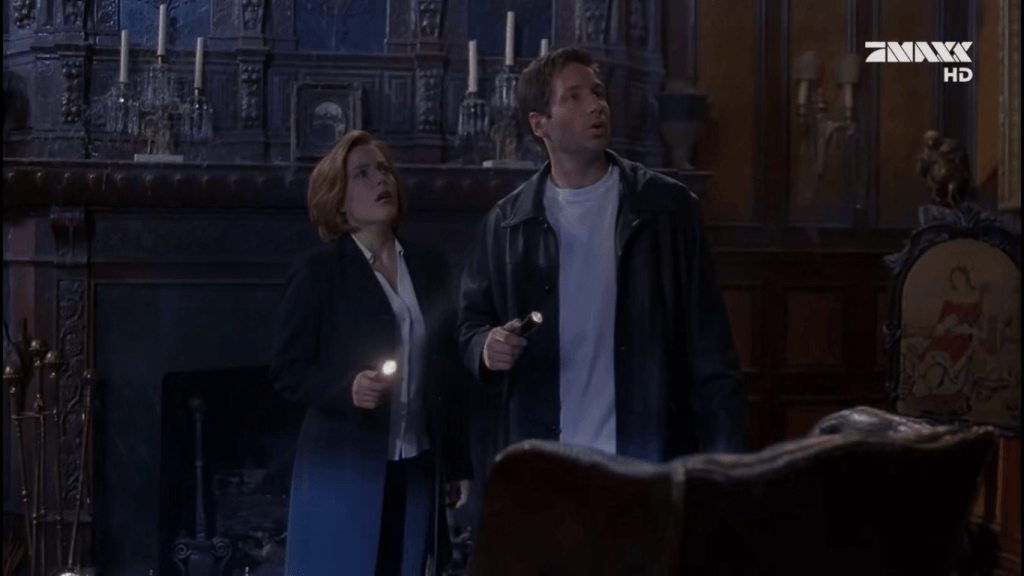 For Mulder and Scully, Christmas is another joyless day of the year. Instead of enjoying the festival with friends and family, the duo goes ghost busting on the Christmas Eve. They barge in a dark gothic manor with the history of murder and suicide. What follows then is a delirious mind game, in which a ghost couple tries to persuade FBI agents to kill each other. Although this episode seems more appropriate for Halloween, ghosts gotta celebrate Christmas too. It effectively subverts clichés of horror genre to reflect how terrifying loneliness can be. Christmas is not so merry when only thing to descend from chimney is despair, only thing to knock the door is tragedy, and only gift you wish is death. This one is for all lonely souls. You’re not alone in your loneliness. 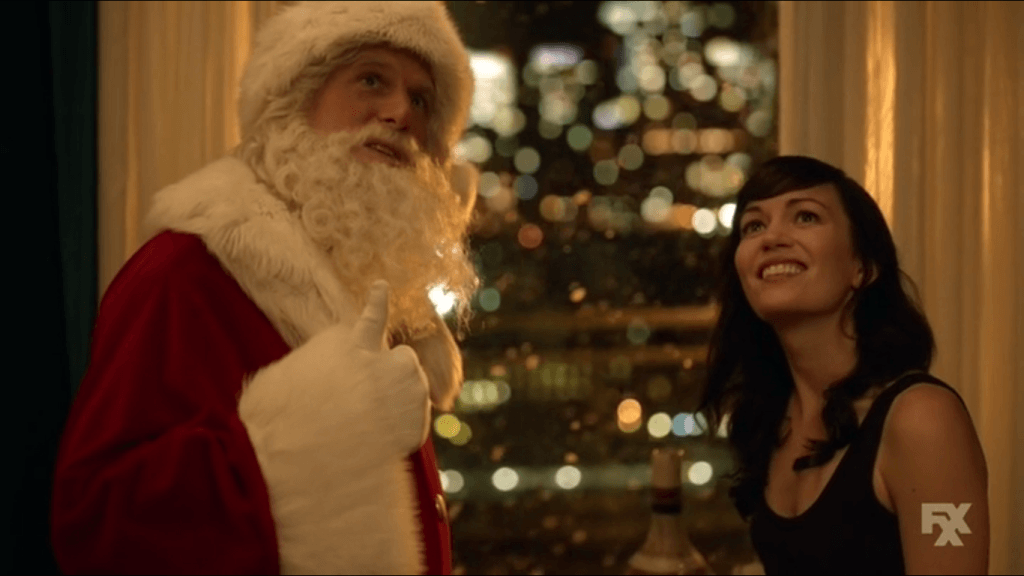 As its title suggests, the show often features an unattractive nerdy guy named Josh and his surreal adventures in an unrelenting quest for love. But only for this episode, the show changed its title to ‘Woman Seeking Man’. Much like any other episode, here too, characters find themselves in bizarre situations. Liz finds herself drawn to an old grumpy man that also happens to be the Santa Claus. Everybody loves Santa, especially Mrs. Claus. Liz’s affair with Santa puts their marriage to a test. Santa is still attractive because he is old fashioned. In an era of tinder, he still prefers hotmail to exchange flirtatious texts. But without his wife, Santa is lost, and is reduced to wipe toilets at Star bucks. This episode reminds us, that apart from being the man who runs Christmas, Santa is also our secret childhood crush. So, grab a glass of milk and cookies, sit back and enjoy this wacky Christmas episode. 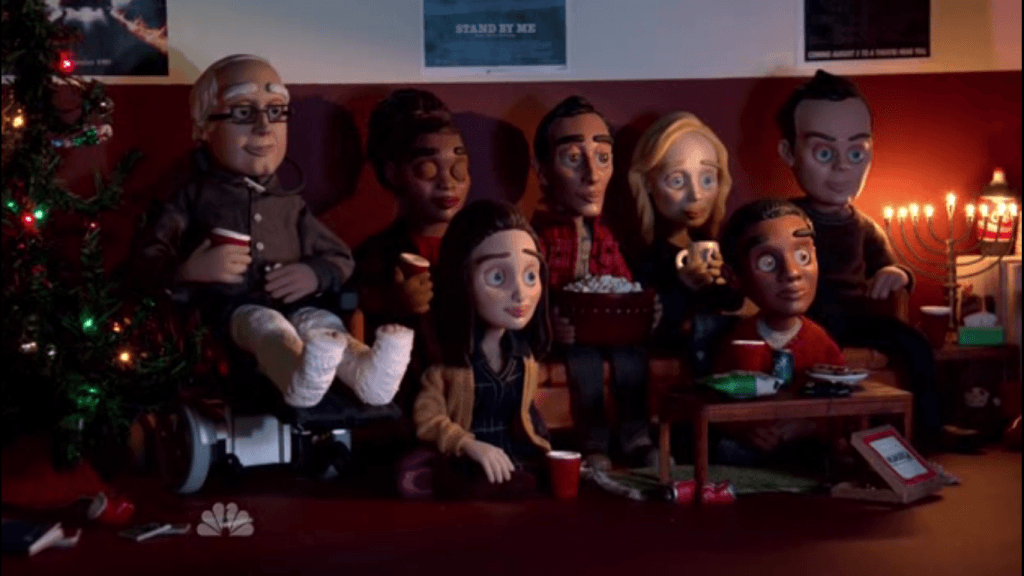 This Community episode is packed with everything we expect in a Christmas special, and yet, it’s not about Christmas. Let’s admit, Christmas is a delusion, just another long and cold night, but it can be warm and bright if you’ve someone to keep your company. No one wants to be alone on Christmas night. This episode puts you in the state of Christmasnosis and transports you into the winter wonderland where stop-motion animated characters are searching for meaning of Christmas in frozen cave of memories. The episode revolves around Abed and his uncontrollable Christmas fantasies. What makes this episode stand out despite its vagueness is how emotionally touching it is, the emotion you only felt while watching Rudolf the Red Nosed Reindeer with family. 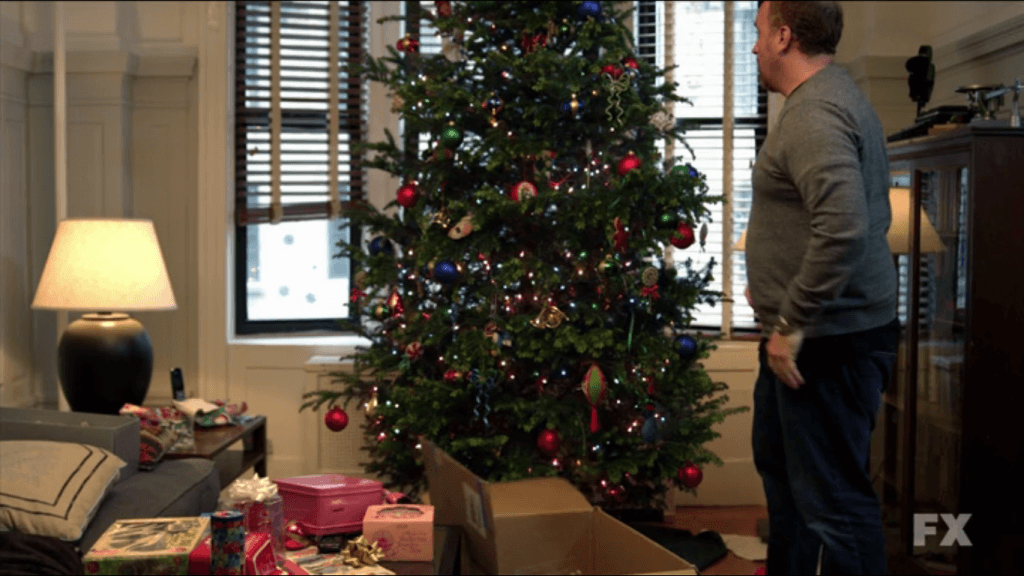 Life, for Louie, is a series of disappointments. Why should Christmas be any different? This is another Christmas episode in the list that deals with loneliness. Some of the later episodes of Louie have unmistakably Lynchian vibe to them, which is marked by frequent use of irrational situations and dreamlike imagery. This season finale starts with a long sequence of Louie trying to fix eyes of dolls just to see the smile on his daughter’s face. There is one dream sequence in which grown-up versions of his daughter chit-chat over how miserable their dad is. Louie decides not to succumb to loneliness and flees to China, only to find more disappointment in his way. But isn’t that what Christmas is about? To find little moments of joy in tragedy that is life. Gloomy as it may sound, this episode of Louie is as uplifting as it’s absurd and is bound to make you chuckle at your own misery by the end. 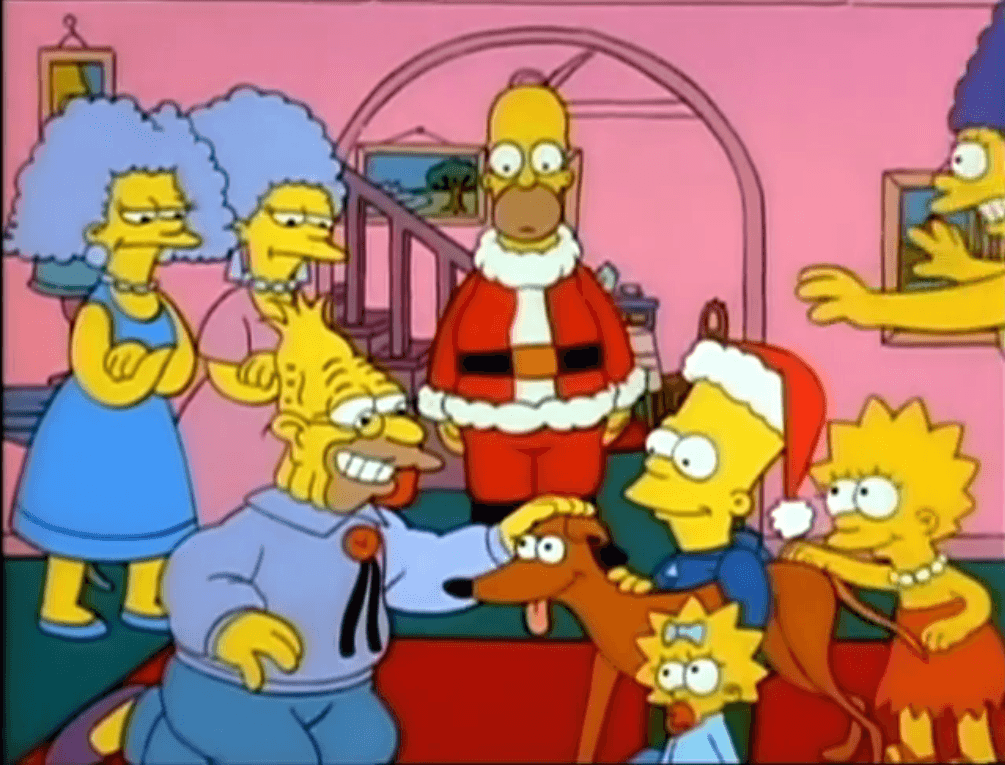 This is not just another Christmas special, it is the episode that introduced us to one of the finest American sitcoms. In the very first episode, The Simpsons created the magic of season with a delicate balance of sadness and gladness. Homer doesn’t get his Christmas bonus and his wife Marge spends all her savings in removing the tattoo of Brat. Their Christmas is ruined- until it isn’t. Believe it or not, miracles happen on Christmas, a little faith in humanity can be unexpectedly rewarding. Who needs a pony for Christmas when you’ve decent home and a loving father? This is the Christmas episode, in which a family of losers won our heart. 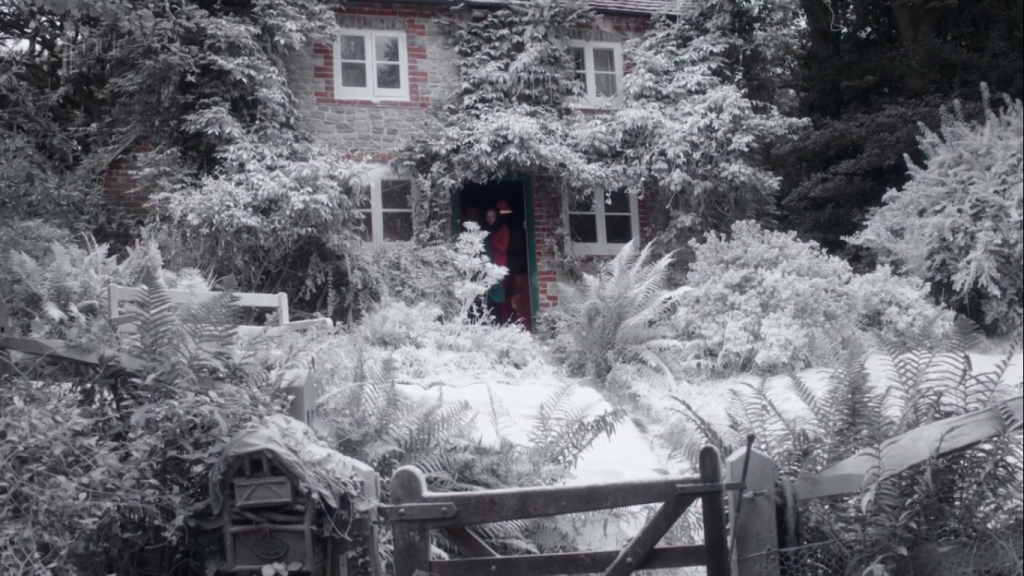 White Christmas is not only a great Christmas special, it is arguably the best episode of entire series. It has tightly written script with short crisp segments and Jon Hamm in central performance. No surprise that it is a dark and depressing holiday episode, a customary commentary on unforeseen ill effects of futuristic technology. Two men, stranded on a deserted landscape, share the Christmas meal and talk about their troubled past. The episode portrays that in an era of technological advancements, there is no space for human emotions. The world lies in eyes of beholder and everything is accomplished by human cookies. With every new invention, humans are becoming less humane. Mercy is a virtue long forgotten. The dream of White Christmas becomes the worst nightmare when one is forced to listen to Christmas jingles for eternity.

‘A very Messy Christmas’ says Baldricks to Ebenezer Blackadder, a saintly man, as opposed to his ancestor Edmund who was crooked and cunning. Everyone is enjoying Christmas, except Blackadder, who is the victim of his kindness. In his goodwill of giving away to poor, he is left dime less on Christmas Eve. And that’s when an old frightening man emerges from walls (not to be confused with Santa Claus) and shows him the visions of past and future. Seeing how selfishness worked out for his ancestors, Ebenezer realizes that bad guys have more fun. And then, he becomes cruel and mean Blackadder we have always adored. Blackadder is one of the greatest anti-heroes in the history of television and it was fitting to see him return to what he had always been- The Black Vegetable!

Although this classic series is popular for its suspenseful divertissements served with Hitchcock’s customary cynicism, this is episode is so simple and moving, it doesn’t feel like Alfred Hitchcock Presents and creates its own identity. This is the story of Mr. Sears, an ex-conman on parole who gets employed as Santa Claus in a department store. He is rehabilitating but his bad temper and big mouth always get him in trouble. Despite knowing the consequences, he steals from the store, so that a kid doesn’t lose his faith in Santa Claus and become a conman like him. This is a great holiday story, in which an old man falls into the pit of crime to save a young boy from falling into the same trap. This selfless act of sacrifice is greater than any gift Santa could deliver. This standard holiday episode is elevated by tender moments and Hitchcock’s sarcastic commentary on Christmas. 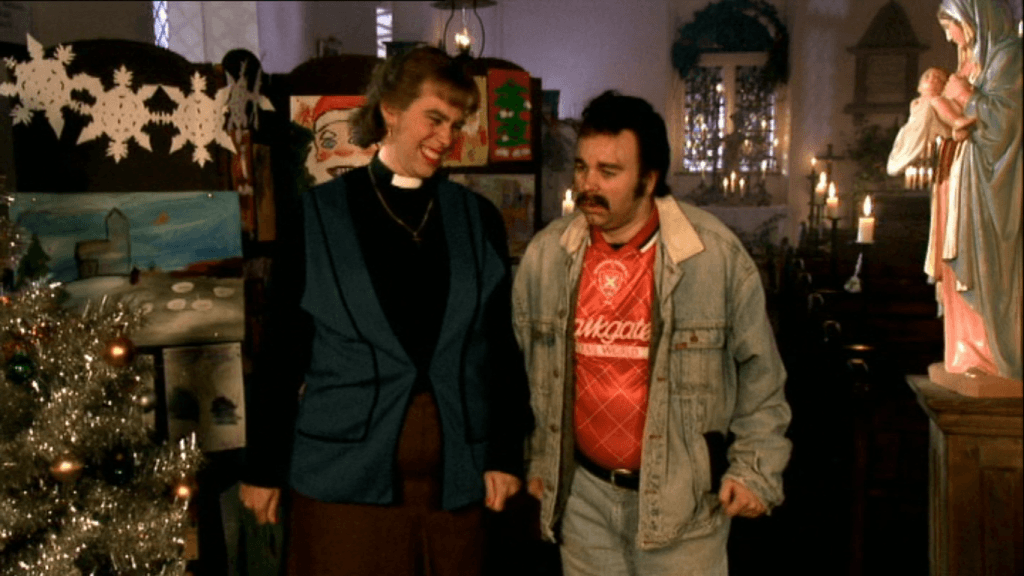 If you think your Christmas sucks, wait till you meet folks of Royston Valley as they recount their worst Christmas nightmares. This Christmas teleplay is set in gothic atmosphere. Three visitors knock the door of Church seeking counsel and consolation from Reverend Bernice, who is fed up with Christmas because her mother was abducted by Santa Claus on Christmas Eve. There are three separate stories involving a man haunted by recurring nightmares of a cult group that stops him from winning line dancing competition, a choir boy who suspects that the conductor is blood sucking child molester, and a gifted vet cursed by bollocks of dead monkey. Unlike other sugar coated holiday entertainments, this deranged episode goes on to show just how horrible Christmas can be.

1. Night of the Meek | The Twilight Zone 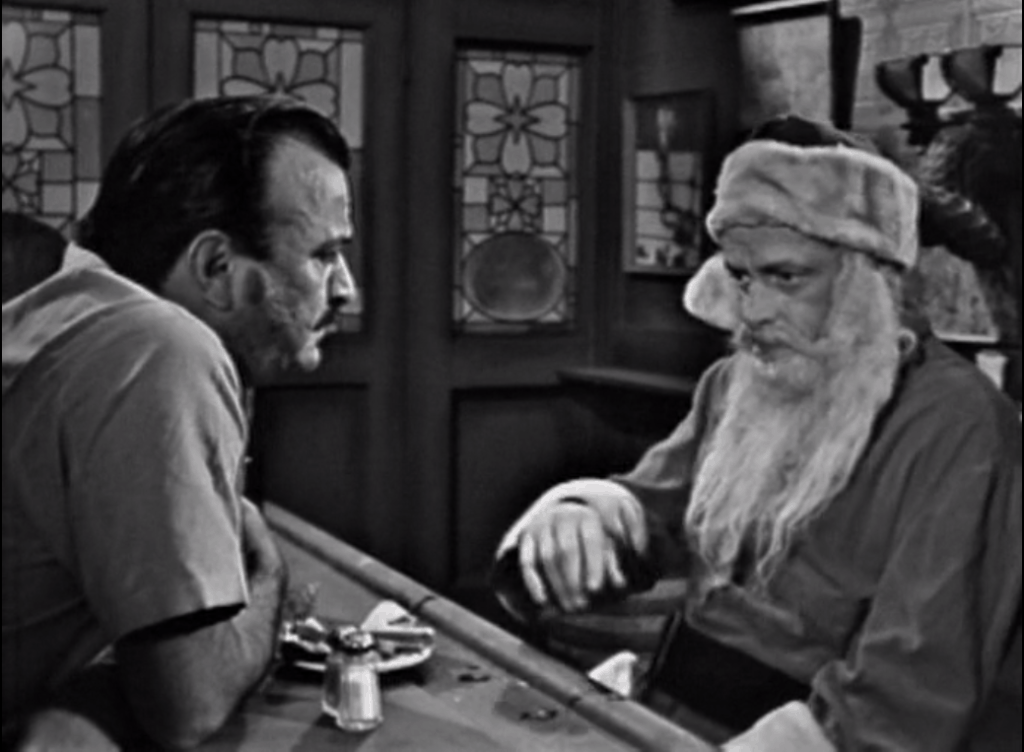 This particular episode of The Twilight Zone is an unusual bag stuffed with the magic that is Christmas Eve. Part a celebration of the wondrous spirit of Christmas, part the magic that can only be found in The Twilight Zone. This one is for all dreamless and hopeless folks damned by poverty and starvation. It is the story of Henry, an aging purposeless relic of another era, an unemployed wino who once in a year plays the lead role in a uniquely popular American institution. His heart aches to see the commercialization of Christmas, parents barging up and down department store aisles. His wish of becoming Santa Claus is fulfilled when he comes across a magic bag of gifts. Night of the Meek captures the true spirit of Christmas that lies in the joy of giving. As said by Rod Serling in his husky voice, nothing is mightier than meek.