Mass hero entertainers are a separate genre in itself. It’s futile to expect anything that doesn’t put the star actor on a pedestal (sometimes literally) in order to make us swallow some conservative message or to hit us with some inspiration or positivity porn. The so-called aura of the star actors is meticulously created and preserved to serve as a product for the frenzied fans. At the same time, movie-goers, in general, keep demanding a coherent narrative that doesn’t solely rely on the aura of the millionaire middle-aged star actors. A lot of times filmmakers fumble while concocting these two narratives within a single film. H.Vinod’s Valimai (2022) – to a large extent – caters to Ajith Kumar’s fans, but annoyingly fails when it is trying to satisfy the so-called family audience. Hence we get loud sentimental notes that are laughable at best and fury-inducing at worst.

Vinod previously collaborated with Ajith for Nerkonda Paarvai (2019), a remake of Pink (2016). It’s a bold decision by the actor since a chunk of Ajith’s fans would easily relate with the antagonists of Pink or with the silent conservative majority (which I witnessed in the theater as well as in the social media rants). Apart from one wrong note, Nerkonda Paarvai was a faithful remake of Pink that makes good use of Ajith’s fine ability to offer low-key performances. Nevertheless, it’s an unspoken rule in the industry for star actors that when they do a film they are interested in, then it’s time to do one for the fans or the mass.

Valimai has all the things AK fans expect from him: He is clean-shaven, he walks a lot, and he rides lot of bikes. It revolves around a clichéd biker gang who roll with a clichéd name ‘Satan’s Slaves’. Lonely, unemployed youngsters are its members. They steal drug shipments, sell them, steal bikes, and under the influence of drugs commit some horrifying crimes. It has been happening for years, but no police officer is intelligent enough to detect this organized crime. The commissioner of Chennai looks at the horizon from a high-rise building, wondering about the right policeman for the job. 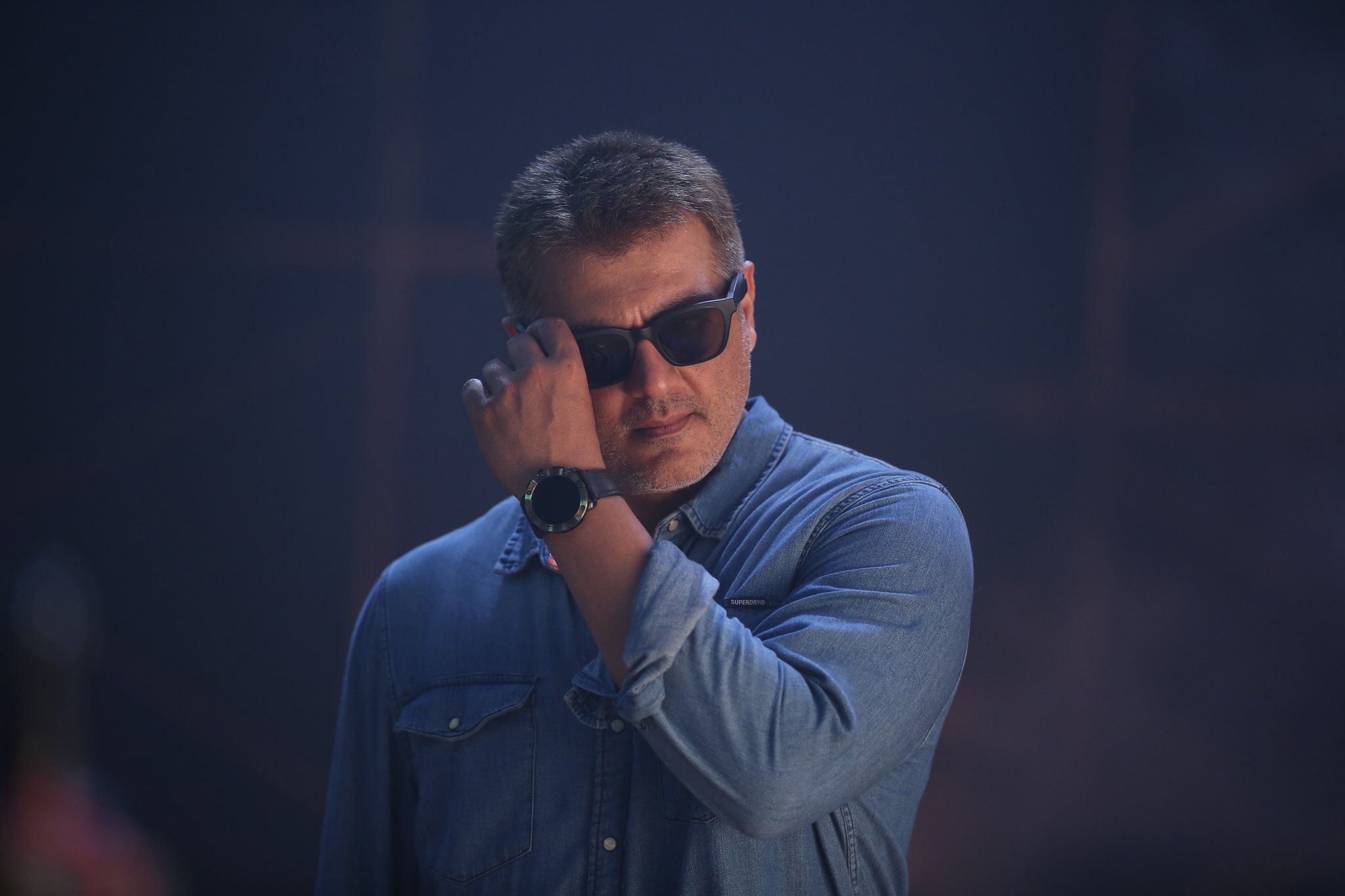 Vinod proved in Theeran Adhigaaram Ondru (2017) and Sathuranga Vettai (2014) that he is a pretty good mainstream filmmaker. At the same time, the romantic subplot in ‘Theeran’ showed that he is atrocious in handling the conventional commercial cinema elements. In Valimai, it feels like the filmmaker is going through the motions when it comes to following the template. Master (2021) and Petta (2019) are a couple of recent examples that elegantly intertwined the ‘masala’ template elements into the narrative. H.Vinod simply sticks to the outdated formula by going for an unimaginative hero introduction action scene and a tiring song sequence.

ACP Arjun Kumar (Ajith – who else?) is soon transferred to Chennai from Madurai. Of course, what can an on-screen ACP do in Madurai apart from beating up the ruffians and dancing during the festival? Now he is going to solve a high-tech crime in Chennai. ACP Arjun, in fact, cracks the case in half a day. H.Vinod is aware of what we are gonna say. Hence he allows Huma Qureshi, who plays a friend and a colleague, to point that out. All’s fair in a mass hero cinema; so no worries Mr. Vinod.

Even so, Valimai would have greatly benefited if it had a strong villain. Definitely not the kind who flexes his tattooed biceps and explains his life philosophy in a few yawn-inducing lines. And Karthikeya plays the poorly written antagonist character in the blandest manner. The identity of the mysterious biker gang leader is easily revealed. Moreover, he behaves like a fool throughout the narrative. The only weapons in his arsenal are his biker chic girlfriend and ACP Arjun’s younger brother. Yes, Arjun hails from an utterly dysfunctional family. Misery porn would sound less miserable compared to the characterization of Arjun’s family. The unemployed brother of Arjun is not even a character. He is rather a creature that’s useful for the interval twist, and eventually the means to offer the social message.

It’s well-known that pandemic played a spoilsport during the shooting of Valimai. Add to that the mass hysteria in the form of #Valimaiupdate. Maybe that’s why the 3-minute trailer has already warned us that there’s nothing unique about the film apart from the stunt sequences. Forget unique or out of the box. Valimai largely fails to connect because Vinod utterly bores us with his characterizations, and eventually prioritizes displeasing family sentiment over action entertainment. 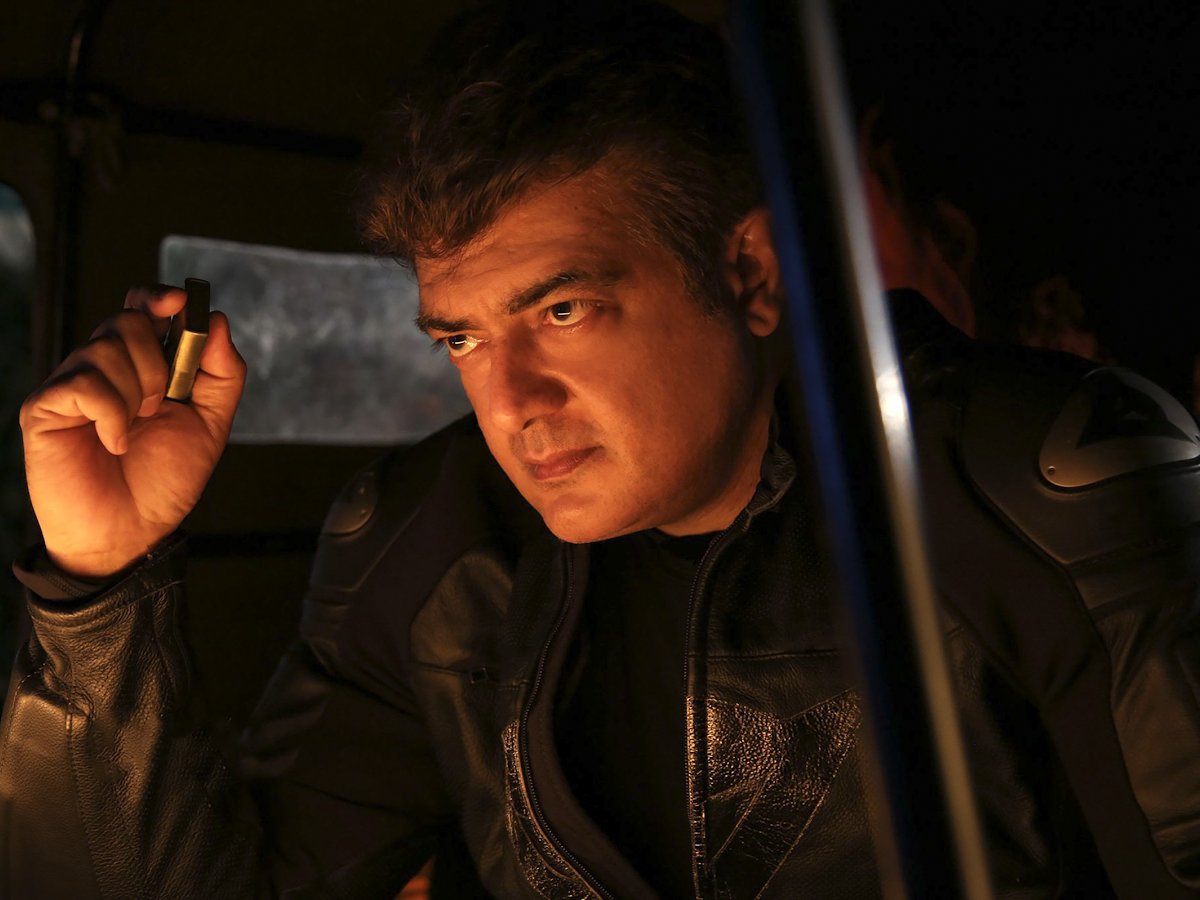 The stunt director Dhilip Subbarayan has perfectly delivered the hype that was created in the trailer and other promotional clips. Tamil filmmakers have often talked a lot about start-of-the-art stunt sequences in their movies. But on-screen it would either look like a cheap copy of a Hollywood action sequence or would totally lack the thrills. Considering the budget for films like Valimai – if we subtract the whopping salary for the hero – Dhilip Subbarayan has really come up with tense, risky, and brilliant action sequences. Even director Vinod is so invested in these scenes that are lacking in the other dramatic portions.

Valimai is not terrible like Vivegam (2017). It might satiate Ajith fans and has some engrossing elements for the others. However, barring the action scenes, everything unfolds in a flat manner. Stuff happens right when we expect them to happen. Moreover, the do-gooder roles don’t really suit Ajith, compared to his protagonists with grey shades in movies like Mankatha (2011) or Yennai Arindhaal (2015). In fact, he is a pretty good actor who is wasted in such fan-service movies. The same goes for Rajinikanth.

Probably the one thing that needs to be addressed about Valimai is the enduring conservatism and regressive ideas. Not just in Valimai, it’s common with all these commercial products masquerading as cinema. H.Vinod’s investigative thriller Theeran received plenty of criticism over its portrayal of the marginalized communities and tribes. It was accused of conforming to the existing notions of criminality by associating criminal acts with certain impoverished and ostracized communities. The director issued an apology over the issue, claiming that was not his intention.

Now how should we perceive Arjun’s brother’s sly and bigoted comment on internal migrants taking over good jobs in Tamil Nadu? He emphasizes it through an odd dialogue:  ‘those people would even clean the tables until they find a proper job, how can I do it?’ Of course, we can take it as the mindset of a spoiled brat. But considering it’s a Vinod movie, let’s keep that in mind while going through his future projects. Valimai’s conservative message is familiar. It’s not just Vinod’s creation. It’s everywhere. The film ends on a note saying ‘family is everything’ & ‘moms are our saviors’.

If the unemployed drug-addled youngsters are the products of dysfunctional families and judgmental society, then how can going back to the same twisted, institutionalized set-up benefit them? Who asks such questions when ‘thala’ is throwing messages, huh? Complexities are hard to sell. Mother sentiment and conservatism are easy to sell. Its mass entertainer, you cry-baby! Racing bikers are devil’s spawn and police officers’ extrajudicial punishments are good. Mom is noble. Everything else is ignoble. Well, hope you all have learned your lessons from Valimai!

Valimai is now streaming on Zee5