Ranjan Ghosh, the young and promising Bengali filmmaker, who has to his credit three acclaimed features – Hrid Majharey (2014), Rongberonger Korhi (2018), and Ahaa Re (2019), has put himself in the spotlight again with his fourth Mahishasur Marddini (2022).

His debut directorial film Hrid Majharey, with Abir Chatterjee and Raima Sen, inspired by the Bard of Avon’s eponymous play Othello, as a tribute to the renowned English playwright on his 450th birth anniversary, pitchforked the young Ghosh into the global spotlight, winning him laurels and much appreciation.

Thereafter, came Rongberonger Korhi and Ahaa Re, both of which have been featured at BIFFES’ earlier editions and now Mahishasur Marddini (2022).

In his delectable Rongberonger Korhi (The Colours of Money), through a series of ensemble tales, oscillating from rural to urban, Ghosh provides different attributes to money – RED, BLUE, GLITTERY, WHITE, to drive home its succinct social message, in a tongue-in-cheek, sardonic and sarcastic manner.

Related to Mahishasur Marddini (2022): Ahaa Re (2019): A Beautiful Representation of Inclusivity

In Ahaa Re (The Two Lovers), another astute and affirmative attempt, he speaks of how cupid can strike a couple – an estranged chef and a food catering lady – drawn from different countries and religions, different backgrounds, and other attributes but united by their singular love for cooking.

In his latest visitation, Mahishasur, Ghosh, however, makes a conscious and marked departure from his earlier narrative concerns. Yet, despite its boxed-in and claustrophobic setting of a single-stage, he has you engaged with the assuredness and astuteness he is blessed with. His films being fine examples of his surefootedness of the craft and idiom of visual narration given that he is also into other technical aspects of filmmaking.

In Mahishasur, eponymous titled, Ghosh draws upon the horrific Nirbhaya incident, which roused the collective conscience of the nation, for the kernel of his searing social treatise. He takes upon this sliver of a tragic incident and supplements it with other similar tragic tales to spotlight on the duplicitous nature of society over such victims and the female gender in particular who bear the brunt of these heinous crimes.

Conceived in the course of a single night, and specifically, as also conveniently, consciously set in one single location – a haunting decrepit mansion, Ghosh, through his chorus of characters drives his homily as the players introspect and dissect the heart-rending incident as also reflect upon their own past deeds. 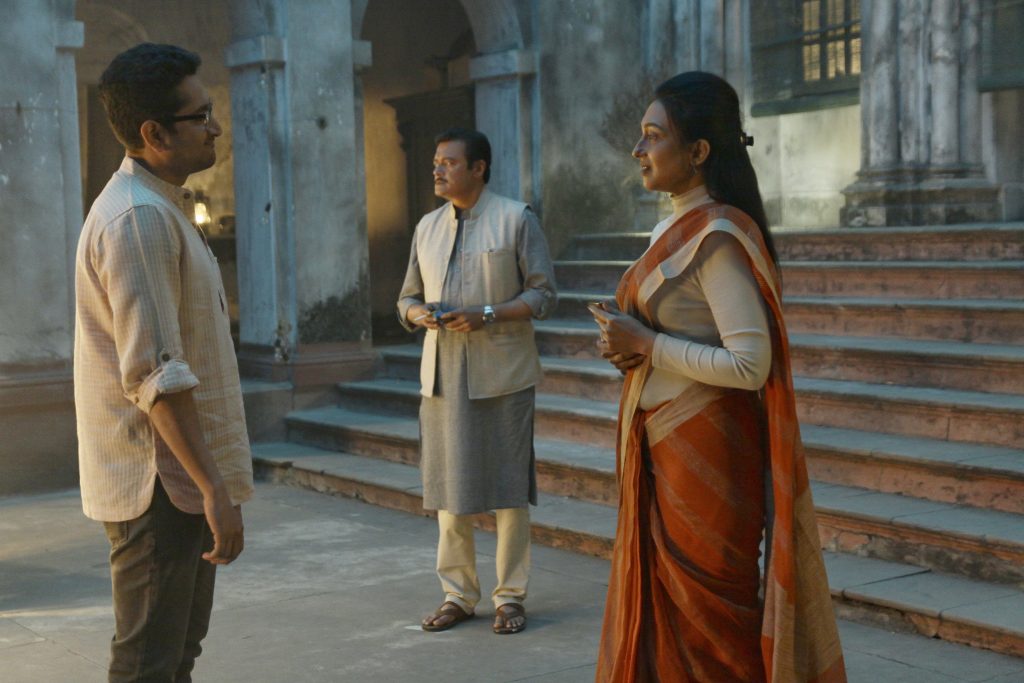 Taking to theatrical format for his searing and soul searching tale, Ghosh holds a mirror to the maleficent society depicting as to how, irrespective of men/women, they can be as inured and unconcerned to the untold sufferings of the women in our society.

In the course of his Mahishasur, Ghosh speaks of how it is not just men who are at the guilty spectrum of perpetrating such horrendous acts but even women are equally culpable, callous, and complicit at their very own gender, impervious to their needs.

Besides the film’s four young GenX urban youth who ruminate and pontificate as to how society should deal with the perpetrators of the heinous crime, you have the mansion owner, on an astronautic mission; her brother, an election-strategist; her past admirer and possible lover, a politician in the wolf garb who in fact peddles in the trafficking of young children in the garb of finding them better homes; another snooty old man who vainglorious extols himself of how he gives the victims a decent burial, all denuded by Ghosh’s clever screenplay despite the holier than thou façade they wear.

Each of them is ridden by a guilty past of maltreating the woman in their lives and now acting as moral guardians of victims, when, in the past, they had shunned, spurned, and shied away from doing their duty to them.

Yes, society may worship the feminine form as the venerated Durga deity extolling her powers to rid evil from our society but when it comes to taking a similar decisive step in reality how each of us steps back selfishly and sheepishly hiding behind our prejudices and much better station to only live in the falsehood of our exaltedness is what Ghosh bitingly portrays putting to shame each one of us and our behavior to the women of our society.

As Ghosh has repeatedly stated at various forums, “my film is conceived as a letter of apology to women for all the wrongs done to her. This film is unapologetically feminist and unapologetically political. Ever since a woman is conceived in the womb – from that stage till the point of time when she takes on the role of a sister, a daughter, a friend or a girlfriend or a mother or a wife – at various stages, she goes through torture or discrimination and this insult is heaped upon her not only by men but also by women. There are racism and class differences.”

Assuredly, Mahishasur does come at a time when we read in a ritualistic and daily manner the heinous crimes being committed on women and the culprits virtually freely roaming despite their despicable acts while the law takes its own time to render justice to the victims and rape survivors and the less fortunate who pay with their lives after the act.

And as Mahishasur Marddini (2022) rolls out, you have the fiery and revered Goddess herself allegorically and metaphorically remain a silent and mute witness to the goings-on subconsciously slaying the hidden demons in the recess of diaspora’s psyche that is yet to rise about the selfish and self-centered stoicism.

In justification of his theatrical format, Ghosh has explained that “I have always wanted to try out Aristotle’s three unities – unity of action, time and place. The film is an exploration of the rich Indian theatre tradition and the Indian aesthetic of the film. I could visualize the characters, making their entry and exits, after having their say, sauntering about as if on stage.”

In fact, the film, closes with the curtains being drawn, as if a play has come to an end, as the credits roll by.

“The film,” as Ghosh says, “begins with a triggering incident, then goes into a different space. It’s a combination of seven-act and real-time structures. The acts do not have any causal link with one another. The challenge was to make it cohesive and cinematic using all available tools.”

As Ghosh himself puts it succinctly, in Mahishasur, “I hold a mirror to all of us. The idea being to ensure each of us feel bruised and ashamed of our thoughts and actions. That precisely is the audience’s takeaway from the film. To reflect on what we do to our daughters, sisters, girlfriends, wives, mothers, day in and day out…”

Indeed, Ghosh, an alumnus of St Xavier’s School, Durgapur, who sojourned to Capital City Kolkata (then Calcutta) to pursue Physics at Jadavpur University, and who, however, left it midway to try his hand as a seaman, sailing around the globe for the next four years before finding his true calling in film making, has come a long way since.

Pocketing a degree in Nautical Sciences from the University of Mumbai, Ghosh took to where his yen belonged, enrolling himself at Mumbai-based film school Whistling Woods International to study filmmaking to graduate in 2009 with a major in screenwriting.

After cutting his teeth in various capacities as script assistant, assistant director, as an understudy with Aniruddha Roy Chowdhury and Aparna Sen, co-authoring and scripting her Bengali film Iti Mrinalini, which also included set and art designing, Ghosh took that first decisive step at filmmaking with Hrid Majharey inspired by Shakespeare’s Othello, supplementing elements of Macbeth, Hamlet, and Julius Caesar as well in his exploration of Othello, and with Mahishasur Marddini (2022) he has only grown in his grip of the medium and the cinematic craft chiseling it to his visual and creative caliber. Kudos!

S. Viswanath is the co-author of ‘Random reflections: kaleidoscopic musings on Kannada cinema’, and a film critic with over 30 years of experience reviewing Kannada, Malayalam, Tamil, Telugu, Hindi, and English films. He has served on the jury of several international film festivals and officiates as the world cinema curator of the Bengaluru International Film Festival (BIFFES).