An elephant trumpets in the background when we first see Ayyappan in Sachy’s highly entertaining action drama, Ayyappanum Koshiyum (2020). Ayyappan (Biju Menon) is a SI working in the Attappadi forest area whom we learn later is akin to a maddened elephant (aka Mundoor Maadan) when faced with injustice. The police uniform is supposed to have tamed him and this man with the name of a forest god has always stood for the oppressed while keeping the ‘law on his side’. Furthermore, like every ‘good’ person with power, Ayyappan takes humanity into account. In an early vignette, we see him dig into the roots of the crimes and mete out punishments accordingly.

The restraint placed upon Ayyappan, however, is unwittingly removed by Koshy (Prithviraj), a man with a big ego because he also wore an allegedly prestigious uniform (army), and also a man who considers him to be above law thanks to his thuggish father’s political connections. Long before Koshy comes under the deadly grip of Ayyappan, he is held fast for breaking the law: caught with bottles of liquor in a dry area. Koshy is enraged that he can’t use his influence to circumvent the law. He retaliates which leads to Ayyappan losing his job.

Among the common populace, the consensus is that it’s not wise to have a policeman as your rival or enemy. That may not apply to someone of Koshy’s status. But the rich rascal soon realizes that there’s something worse than having a policeman as your nemesis – it is the man who has nothing to lose. Ayyappan does have a family. He is married to a hard-headed woman from the tribal community and they have a little kid. Nevertheless, writer/director Sachy gracefully establishes that the couple has weathered greater adversities in life and they are not used to cowering in front of power. Hence Ayyappan’s retaliation is very literal, to the point, unlike Koshy’s way of flexing the political and economic muscles.

Still, Ayyappanum Koshiyum isn’t the familiar duel between a hero and a villain. Prithviraj’s Koshy is also bestowed with redeemable qualities. We get to discern his fears and tenderness lying beneath the swagger and tenacious ego. The second half is filled with games of one-upmanship. Though the action becomes exhausting after a point, the social milieu the narrative is set inconsistently offers some interesting layers. And similar to narratives dealing with one-upmanship between rivals, it tries to show how there are problems on both sides: As critic Baradwaj Rangan writes in his review of the film, “…in a manner of speaking, Ayyappan and Koshy are both… the same size”.

Of course, it’s tough to believe that their struggles are somewhat similar. An affluent upper-caste man being a prisoner to the patriarchal mindset doesn’t face the same struggles as an economically vulnerable and socially ostracized former SI. Ayyappan is ready to sacrifice his life to teach a lesson, whereas the father-son duo is engaged in the game out of an abstract concept called ‘pride’. That’s one of the few instances you realize that though Ayyappanum Koshiyum is a brilliantly staged mass entertainer, it really has to tick certain boxes of commercial/masala cinema. So you need to maintain the semblance that their struggles are ‘somewhat similar’ and push towards a pleasing denouement.

Even taking into account its few shortcomings, Sachy’s movie has no dull portions and two unforgettable mass moments as Ayyappan goes into full attack mode post-interval. The whistle-worthiness of the scenes easily excels all the carefully crafted slo-mo shots in those empty star-vehicles. Part of the reason why Ayyappanum Koshiyum’s mass scenes works is the way Sachy roots his narrative in the social, political milieu. And the matter-of-factnes with which the delightfully inscrutable Biju Menon engages in the fight gives more power to the scenes. One is when Ayyappan gets off the bus and walks coolly, leaving his slippers in the middle of the road, to show Koshy what he is actually capable of. His literal bulldozing leaves the smug Koshy with a bitter aftertaste. 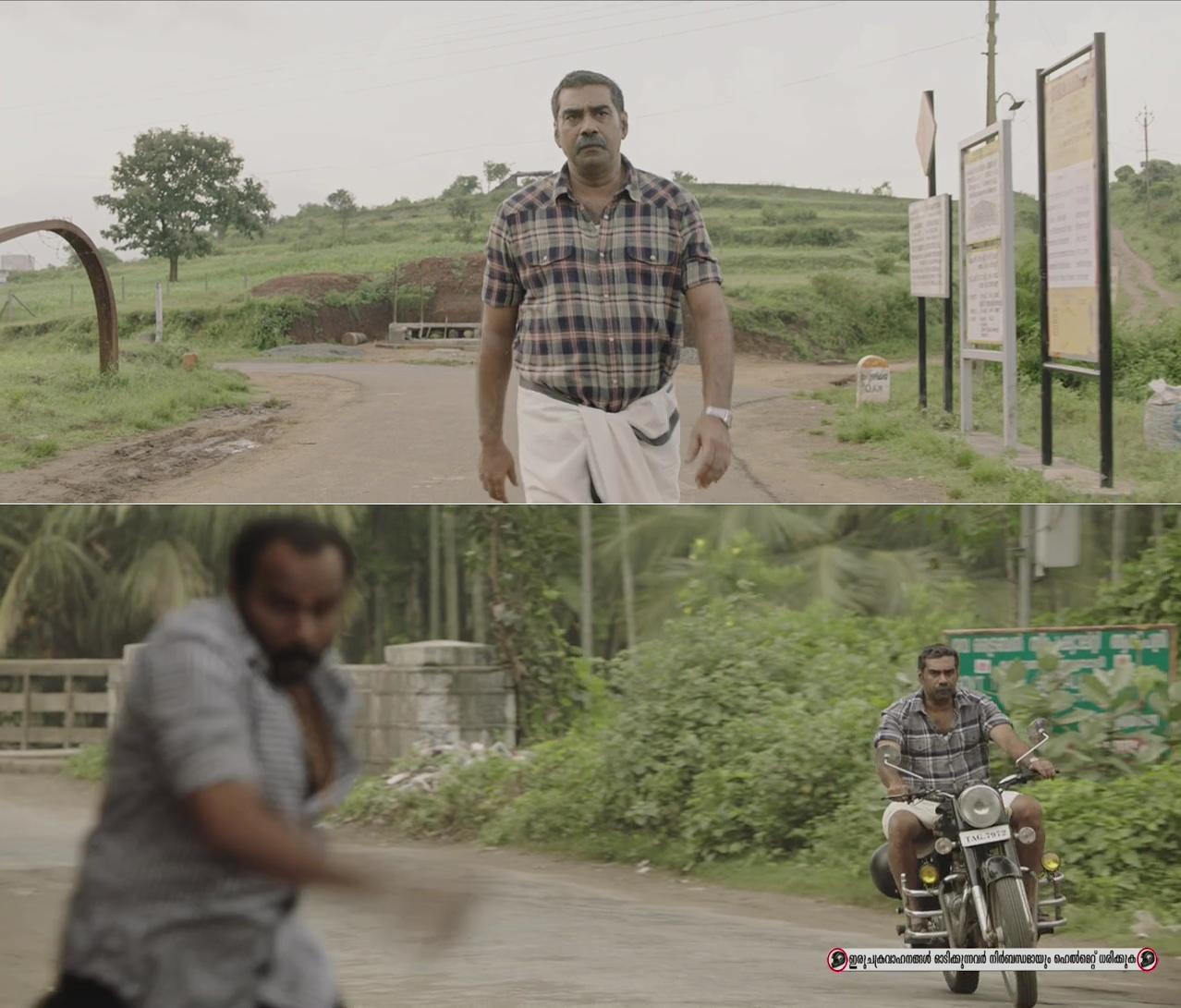 Music composer Jakes Bejoy’s folk elements in the BGM perfectly complement the atmosphere and action. The other big whistle-worthy scene is when Ayyappan nonchalantly overcomes an obstacle course to beat up the thugs in the first floor of the hotel. There are no extraneous visual flourishes or rope tricks; just a no-frills display of an infuriated man beating up people (though Sachy reserves a well-shot yet a very cinematic fight scene for the climax clash). Moreover, the strong characterization and the gradual build-up to the confrontation play an important role in making these sequences memorable. In fact, it’s a relish to see how Ayyappan repeatedly dismantles Koshy’s armor of money and power leaving him stranded.

Prithviraj may play a guy who goes to great lengths to satisfy his bruised ego. But Prithviraj the Star allows Biju Menon to steal every scene he is in. Stars in Indian cinema generally tend to demand a space to showcase their larger-than-life persona, at the expense of narrative and characterization. Few directors can fascinatingly transcend this barrier but only to an extent. For instance, Karthik Subbaraj in Petta crafts the usual Rajinikanth-addressing-fans moment through a fascinating final close-up shot (“Is this enough, my child?”). Or when Vetrimaaran employs the oldest trick in the Tamil commercial cinema vocabulary – i.e., the seemingly meek protagonist is actually an ‘Asuran’ in disguise – through a well-executed stunt scene.  Mani Ratnam has proved to be good in constructing the clash of male egos (Agni Natchathiram, Thalapathi, etc) within the commercial cinema framework. But though he is a master at staging the dialogues in his narratives will often either sound false or go overboard.

Probably the aforementioned mass scenes in Ayyappanum Koshiyum work because Biju Menon is not much of a star. But even if it was played by Mohanlal or Mammootty, Sachy’s writing would have been similarly grounded that the star’s persona wouldn’t have heavily influenced his careful characterization of Ayyappan (and it’s sad that we would never know the answer to how Sachy would have handled a bigger star). Nevertheless, it works to the narrative’s advantage that Biju Menon comes out of nowhere to offer the best performance among any recent mass entertainers (we the Tamil audiences have only seen him in the most atrocious mainstream Tamil movies).

Ayyappanum Koshiyum doesn’t come anywhere near to offer a profound interpretation of the male ego. It’s actually a veiled celebration of the ideals of masculinity without much cringe-worthy moments and with an emphasis on character and socioeconomic status. However, it’s been a while since I had a great time watching a commercial entertainer as Sachy takes a very smarter approach while retaining fewer strands of the mainstream cinema DNA.

Top 4 Guidelines to Follow When Selecting an Online Lottery