Home»Reviews»Film Festivals»Berlin»Geographies of Solitude [2022]: ‘Berlinale’ Review – A visually stunning documentary on a solo woman living on an island
Berlin/Film Festivals/Reviews

Geographies of Solitude [2022]: ‘Berlinale’ Review – A visually stunning documentary on a solo woman living on an island

Zoe Lucas is the voice that guides Geographies of Solitude, the new documentary directed by Jacquelyn Mills, that premiered at the 2022 Berlin Film Festival. It won’t be surprising if you didn’t know about Lucas, who has spent more than four decades in Sable Island, a remote strip of land that is considered one of Canada’s farthest islands. She keeps company- horses mainly, birds, seals, and insects.

Geographies of Solitude understands the subjects and their fascinations, reviving this singular experience with a carefully controlled interplay of reactionary detail and questions on survival. “This is more about experiencing Sable-” she says in a matter-of-fact way that belies her jaw-dropping passion for the environment. It is her island at the end of the day. She takes care of it. This is a highwire of a story, seeking a landscape through the lens of an individual deeply invested in her lifelong commitment to a piece of earth.

Related to Geographies of Solitude [2022] – The City and the City [2022] ‘Berlinale’ Review: The Holocaust Documentary Is Ingenious & Provocative

Mills yields a vividly sensual visual tone to the proceedings- this is not the usual documentation of wildlife in their natural habitat, but of the privacy of living without any modern intervention. Geographies of Solitude fills the frame with slow, static shots of horses grazing, and seals bathing in water. From the introductory scenes itself – it does not feel like another documentary about animals as seen through the eyes of a person. The film expands the lives of these animals as their selves, living far away from any manmade exploitations. This is not a documentary on Lucas but the life she is surrounded with.

Filled in with a voiceover by Lucas herself, Geographies of Solitude finds unexpected grandiosity in its visual storytelling. It opens up enormously in its sounds and images, for the audience to find room within. There are long shots of seals swimming and horses running yet none of them feel one-note or repetitive since the scenes are merged with a string of color-coded visuals and a careful voiceover. Sparse dialogue is the key- there are no extravagant comments on hardships and life away from the populace. It creates a whole lot of difference in understanding the position of Lucas on the island. 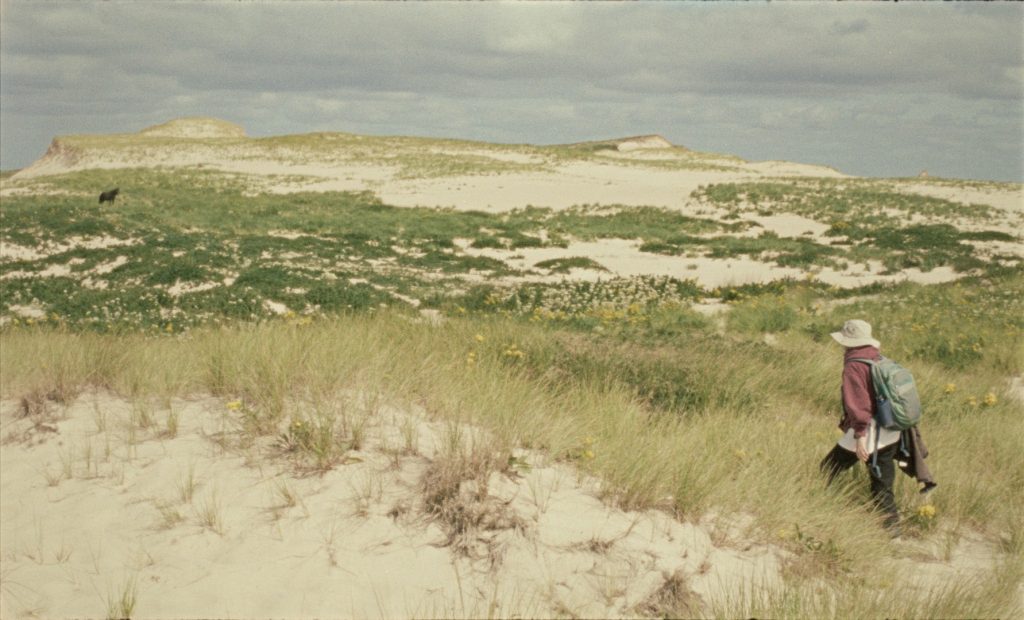 We hear the sound created by some of the animals through their rhythmic gliding over an electrode. We see Lucas’s vast expanse of research and archive on every species in Sable Island. She comments how there are species that she hasn’t heard of before- and it is important that each species has an opportunity to complete its lifespan. Her notebook, exquisitely maintained and updated, is a thing of wonder. She collects data of each species painstakingly, with detailed labels on lifespan and migration. Mills cleverly glides over her notebook with a winning sense of humility.

We get glimpses of decades-old anecdotes and a brief visit of Jacques Cousteau visit, but rarely do we get any details about Lucas herself. Not until the last couple of scenes, do we realize that there exists a sense of regret, that catches the audience immediately, because of the distance that time has created for her survival in a way. Her room is a defiant mess- scattered beads and sheets and papers all across the place- and Mills catches them all. This is a woman who is hosting the audience in her home, and leading them into her history.

Lyrical and visually sumptuous, Geographies of Solitude takes its time to dive deep into the livelihood of its flora and fauna. When it does, it opens up enormously, with glorious soundscapes of insects and seals, blurred footage juxtaposed with the images creating a hallucinating interpretation on the cross between nature and technology. Yet it does not culminate into making overdue statements on preservation and sustainability. Here is a woman who is at the cusp of preservation and destruction- the winds trail the debris wherever it goes, and there is always a bucket full of plastic waste and brand labels. The damages are all there, along with the arranged visits, yielding a formidable political commentary on the callousness as well as the hypocrisy of it all. As Lucas trails off for yet another day, all by herself, you don’t want to lose sight of her. Still, you wish her well.

Read more reviews from our Berlin Film Festival Coverage Here.
For further information about the event visit the berlin film festival website here.
The city and the city links: IMDb

Geographies of Solitude [2022]: ‘Berlinale’ Review – A visually stunning documentary on a solo woman living on an island