At the beginning of the film, the camera hangs precariously from the top to give us a bird’s eye view of the spiral staircase in all its glory. We watch a woman attempt to descend the staircase. She is afraid – it is stormy outside, the shadows of trees lit by the lightning form hungry shadows on the glass window along the staircase – but she makes it to the landing despite her fears. A couple of minutes long, the prologue to this narrative establishes right at the start of the film, The Spiral Staircase, directed by Robert Siodmak, that the titular spiral staircase will be a protagonist as important as Dorothy McGuire’s Helen. Indeed, staircases are one of the perfect vessels in cinema used to amplify a scene using visual metaphors. From Sunset Boulevard (1950) to The Truman Show (1998), films in the second half of the 20th century found the staircase metaphor becoming integral to the cinema. Before we go on to discuss how the film utilizes the trope of the titular spiral staircase as a protagonist, it is important to know the temporal significance of the same.

One of the most popular uses of the staircase in the early half of the 20th century is the Cubist painting, Nude Descending the Staircase No. 1 and No. 2 by Marcel Duchamp. No. 2 revolutionized the concept of space in paintings, portraying dynamic motion in art. The vertical gaze at the nude and its cascading promenade down the stairs with the light and shadows playing on the human body has served as a marker in the early years of the development of cinema. Not to forget, Fyodor Dostoevsky’s Crime and Punishment (1866) had long established the staircase as a space of possibilities in literature, wherein Raskolnikov makes the most important decisions. The staircase in this book also serves a primary role in the execution of the murder. Further, the staircase and its many significances find echoes in the film, The Chess Game of the Wind (1976) by the Iranian director Mohammad Reza Aslani. The constant climb and descent of morality, the use of the landings with fitted mirrors, and the climactic scene are central to the development of the main plot. X.J. Kennedy’s 1985 ekphrastic piece, Nude Descending a Staircase, tells us how the preoccupation with Duchamp’s painting and the staircase, in general, was central to the modernity of the 20th century.

Located inside the house, the spiral staircase serves to connect as well as distinctly dissociate the politics of spatiality within the house. A flight of stairs leads up to Mrs. Warren’s chambers, where she lies bedridden, while another flight of stairs descends into the pantry located in the basement of the house. Mrs. Warren is the matriarchal head of the family and her chambers, being situated on the topmost floor, hint at her status, almost bearing a religious connotation of having to climb up a set of stairs – call it a stairway to heaven – to reach her. The other staircase leading to the pantry below is meant to be accessed by the servants of the house. If we know our Downton Abbey (2010 – 2015) through and through, we have seen enough of it to easily make out this difference. Besides, the stairs serving as the demarcation of space are also clear right at the start of the film when Helen is attending a film screening at a local inn, and a woman is murdered upstairs. This way, the film broaches the idea that entertainment and murder, morality and madness are two sides of the same coin, perhaps, separated by a flight of stairs. 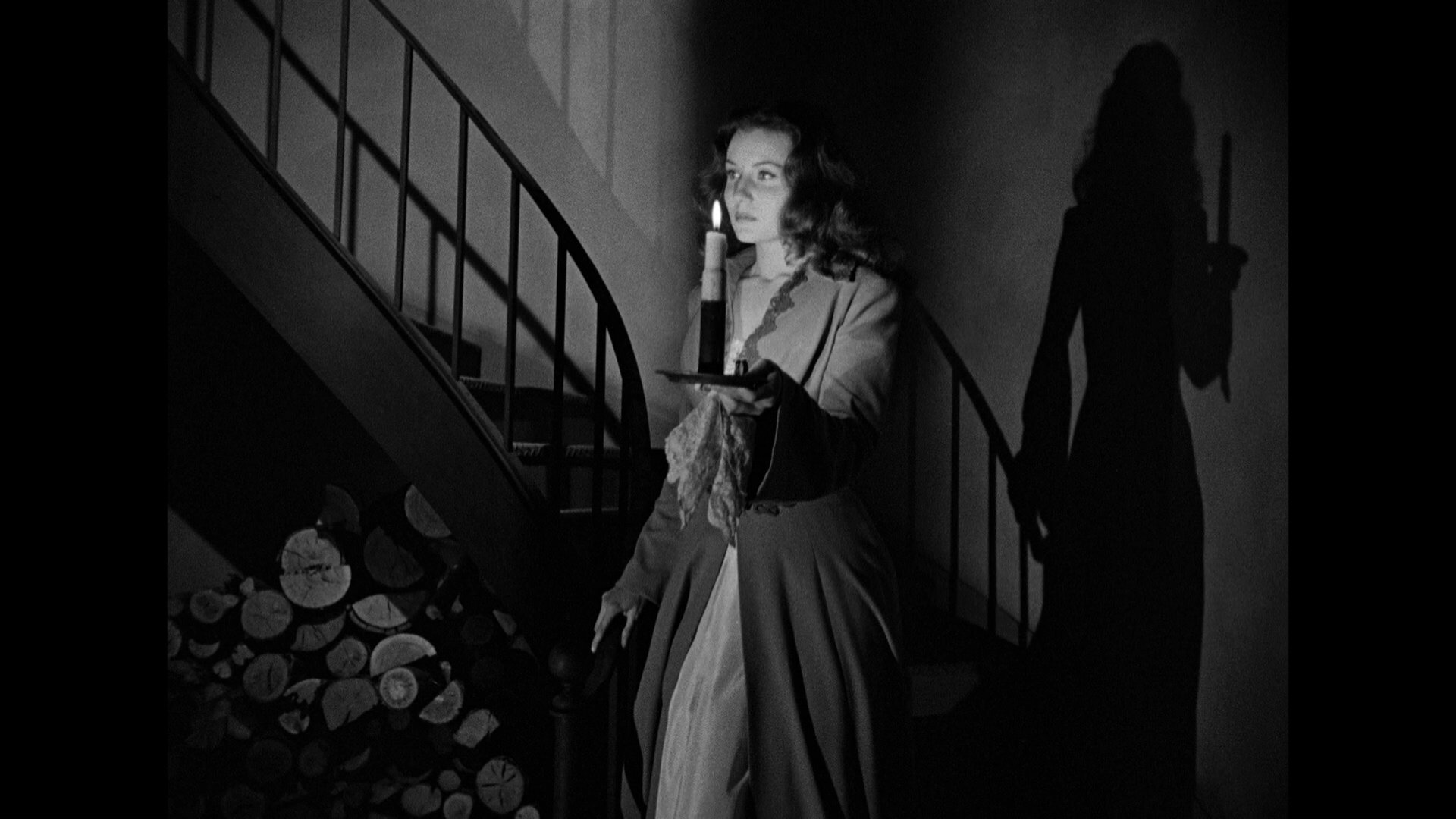 The difference between the two flights of staircases in Mrs. Warren’s house is prominent in the way they are shown in the film. While the one leading up to Mrs. Warren’s chambers is clean and well-lit, the one leading to the pantry is dark and appears to be creaky. We also have two parallel sets of scenes of Helen descending both the flight of staircases to drive home this distinction. In the opening scene, when Helen is climbing down the staircase from Mrs. Warren’s, the lightning, thunder, and the shadows on the adjacent glass windows create an atmosphere of fear around her. In another scene, when Helen is climbing down the other flight of stairs in search of Blanche, the monstrously vivid shadows forming behind her are a result of a lighted lamp she carries in her hand. The second image is scarier, almost recalling the use of shadows in The Cabinet of Dr. Caligari (1920).

That the staircases demarcate the classes is obvious; they also help distinguish the world of the disabled from the able-bodied. Mrs. Warren is bedridden, and her chambers are a safe space for the mute Helen. Helen’s descent down the stairs in the opening scene is like climbing into the real world, which is deeply intolerant towards the doubly marginalized – women and the disabled. Interestingly, this flight of stairs also serves as the site of the climax. Mrs. Warren is positioned at the top of the staircase landing, pointing her gun toward her stepson and the serial killer, Albert, who is attempting to chase Helen up the stairs. A terrified Helen is on one of the steps of the staircase, suspended between these two landings and the two overarching moralities that govern the plot of the film. Albert’s death at the foot of this staircase also hints that he would never be able to ascend the moral ranks after he had chosen the path of murder. Further, his inescapable moral descent has already been hinted at when he climbs down the second flight of steps to the basement and kills Blanche out of jealousy, an anomaly from his usual victims. It is clear that Albert won’t able to retrieve himself from the annuls of this spiraling morality. The theatricality of the climax stays with us long after the film has ended, especially because the staircases help add tension to the plot by complicating a household space.

The question arises: Is ‘The Spiral Staircase’ an intersectional feminist film? It seeks to focus on the murders of the doubly marginalized women by a self-proclaimed moralist, an able-bodied heterosexual man, and ultimately makes this murderer die in the hands of a woman. Mrs. Warren is easily a precursor to the figure of the mother who saves the woman in danger popularized by Angela Carter in her book, The Bloody Chamber (1979). The film also seeks to highlight the fine thread of female camaraderie existing in society – an essential marker of current-age thrillers and feminist horror films. Although most women characters are caricatured, and from time to time, the directorial male gaze is worth the eye-rolling, this is a 40s film that deserves its fair share of an accolade for trying to not downplay the agency of women in a thriller. Perhaps, it is the spiral staircase that helps position the women at vantage points and gives them an upper hand in the course of the story. We are not complaining.

Also, Read: On “Vertigo” and the Obsession for Control of Total Reality

A Matter of Life and Death [1946] Review: A Timeless Treasure of British Cinema