Zombie apocalypse films have become a staple for Halloween viewing. The topic of the end of humanity due to the emergence of these bloodsuckers has been used by several creators to present a thrilling ride of adventure. Most of these projects deal with this subject with a serious tone with savior characters trying to save everyone else. Only a few exceptions such as ‘Anna and the Apocalypse’ try to blend various elements to create an amusing ride that is more than a run for life. Directed by John McPhail, the script of this entertaining horror musical is written by Alan McDonald and Ryan McHenry.

Anna (Ella Hunt) and John (Malcolm Cumming) are on their way to their school. While driving them, Anna’s father – Tony (Mark Benton) broaches the subject of her further education. John blurts out Anna’s plan to travel for a year after school, which she had kept hidden from Tony. He gets angry at her for planning to waste the year traveling instead of getting educated. Disheartened by her father’s disapproval, she yearns to escape the town. During their conversation, they miss out on the news about a person being infected by a certain kind of flu and go on with their regular lives.

While Tony is tired of getting constantly bullied, their friend – Steph (Sarah Swire) is also tired of pretending to be someone she is not. Every one of them longs for a way out of their dreadful present. Anna deals with her ex-boyfriend – Nick (Ben Wiggins) bothering her, and meanwhile, it becomes clear that John has feelings for Anna, and they are not reciprocated. They both realize that they presumably would not get a happy Hollywood ending for their romances.

While they work on their issues, Steph has her own battle to fight. Her parents live all the way in Mexico and still control every little aspect of her life. So, when Anna mentions the constant presence of a parent being a nuisance, it rubs off in the wrong way. Also because, as a closeted lesbian, Step has a hard time in her life as it is to speak about imagined anxieties. While walking away being emotionally hurt, Anna bumps into a zombie but does not register it. Meanwhile, at school, their headmaster – Arthur Savage (Paul Kaye) expects their lenience to his orders and wants their annual Christmas performance to be pitch-perfect. He does not care about the students’ mental health being in shambles if it is for the sake of the school he helms. Lisa (Marli Siu), who is supposed to perform on the day, is also nervous because of Savage.

During her performance, he walks around the school and gets a hint of strange happenings behind some of the closed doors. However, he decides not to alert anyone about it. After the school show, Anna and John wander around the town, introspecting on their life choices. She wonders whether her decision to travel is wrong, and he tries to relieve her. The next morning, both leave their homes, bubbling with energy and enthusiasm for the end of her school year and the beginning of their new lives.

They are so engrossed in their daydreaming that they do not realize the presence of zombies around them with people trying to save themselves. While the world around them is burning, they are blissfully singing the songs of joy. Alas, in the end when they meet, they see a bloodied head inside a snowman’s costume. John figures it is a zombie and while Anna initially does not believe in their existence, she is left with no other option but to find a way to save themselves from these creatures.

At school, the staff is panicking due to the zombie outbreak and trying to manage the present resources. Lisa, who is present there along with them, thinks that her friend – Chris (Christopher Leveaux), who has seen almost every horror movie, will think of one solution or the other to help them out from the apocalypse. Meanwhile, Savage and Tony (who works as the school janitor) have an ideological argument about finding a solution. Savage thinks compliance is the ultimate course, and the authorities will help them out if they stay loyal and within the school’s confines. Tony does not like his righteous worldview and argues to get out to help others and be a part of the fight themselves.

Anna and John rush to the arcade where they work and find Steph and Chris there. Steph believes that, just like every other time, the outbreak is due to corporations who have a history of negligence towards public care and safety. She shows the world map and the places where infections are rising. The friends console her since she seems worried about the well-being girlfriend and her parents. Inside the arcade, they come across some zombies, including the store manager, and they manage to kill them. 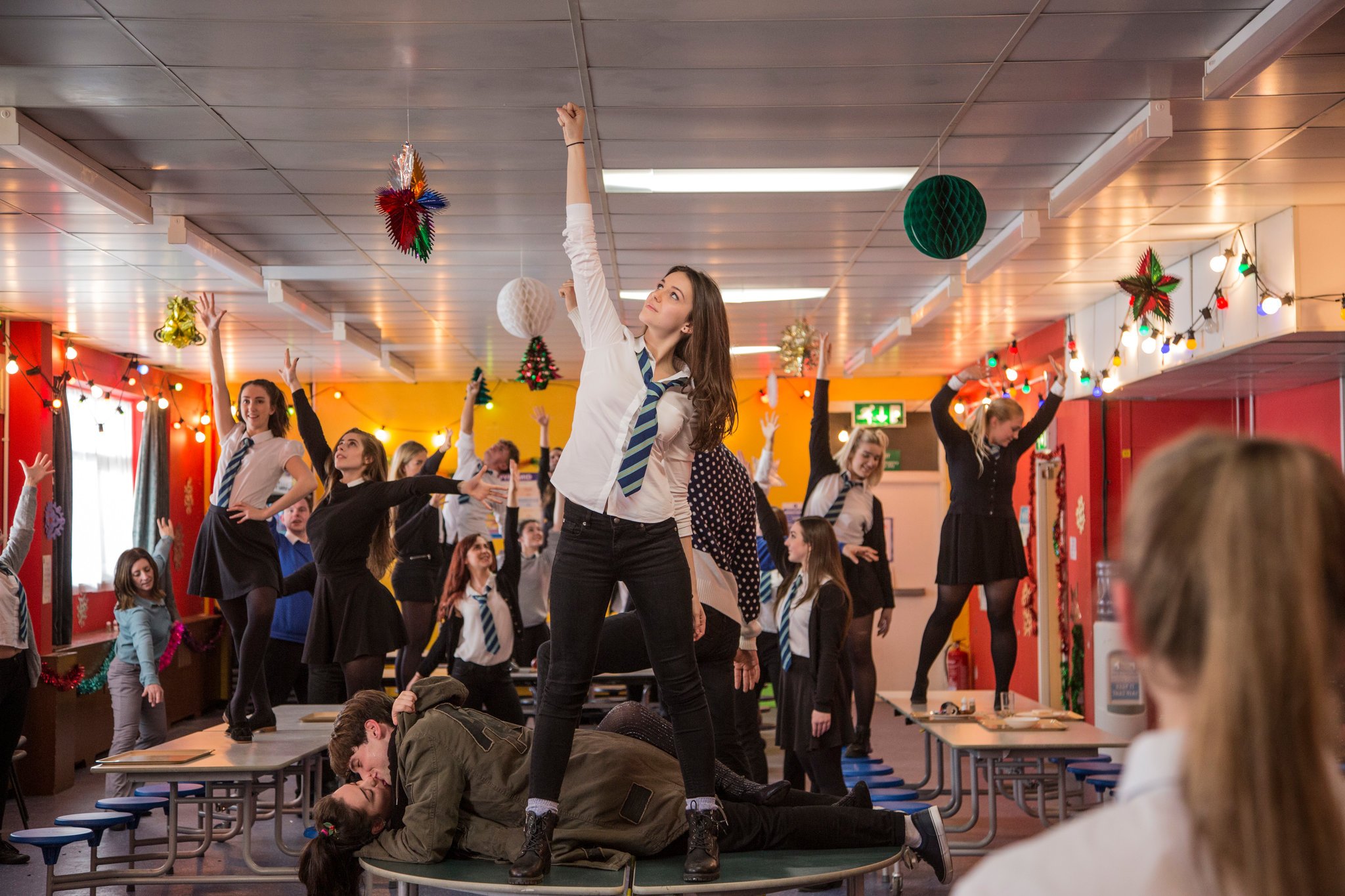 On the other hand, while Lisa believes that people should help one another in such situations, Savage argues about prioritizing. They long to find some sign of hope to take them out of these terrifying circumstances. By the morning, the snow melts down. However, the zombies walk through the streets around the arcade in huge numbers. While the teens try to escape, they come across Nick and his bully friends – who were looting the stores. They portray themselves as the ultimate warriors, who will stop the zombie outbreak.

At school, Savage struggles to make the staff comply with the emergency guidelines. Everyone sides with the revolt by then. While Tony tries to comfort him, Savage barks at him trying to note his class in this scenario. He is panicking but does not let go of his authoritative ideology. On the outside, Anna and John walk along with others, while ruminating over their future plans. While she hopes to escape the town more than ever, she makes it clear that she only sees him as a best friend, and nothing more. She will travel and he will go to art school, and there will not be any complications in their relationship.

All of them enter a Christmas store to hunt down the bloodsuckers and end up losing Nick’s friends during the fight. Afterward, while John and Anna were having a moment of calm amidst the chaos, a zombie comes out from the back and bites his hand. When a bunch of zombies try to attack them, John throws her away and throws himself into the arms of these creatures. She screams in pain, losing her friend like this. The friends divert her attention to a bigger goal, to go meet her father.

Does Anna find her father at school?

Anna, Nick, Steph, and Chris go to their school and meet Savage sitting there by himself. Instead of making efforts to save the people inside, he killed them before Zombies could ever kill them. He gave them a taste of their proposed plan and saved himself from getting caught by the bloodsuckers. While he manically sings and dances as a sign of wicked victory over others, the teens look around trying to find Anna’s father while simultaneously saving themselves from the zombies.

Steph and Chris walk around the school trying to find other people. Chris apologizes for saying that Steph’s parents might be dead and comforts her by saying that they will be there for her no matter what. On their way, Chris finds Lisa alive but loses his mother. On the other hand, Anna and Nick speak out about their differences. She felt bad that he broke her trust and while she gets furious at his selfishness surrounding their break-up, he narrates the tale of needing to leave his father back, who got bitten by a zombie. So, she tries to comfort him.

Steph, Chris and Lisa try to escape the school filled with zombies by providing some distraction. At the time, Lisa gets bit and Chris is left with no other option but to say a final goodbye to her. While trying to find her father, Anna reaches the show’s stage, where zombies were crawling around with Savage smugly smiling at her. She sees her father tied on the stage and starts fighting her way out from the zombies. Savage takes pleasure in her misery and persists with his claim that everyone needs to stick to their assigned roles.

When she finally reaches the stage and gets Tony out of the rope, Savage fights back resisting his escape. In the end, in a particularly theatrical manner, he is thrown right into the trap of bloodthirsty savages. Afterwards, Tony pleads with her to leave the school and go away with Nick and not argue with this request of his. While she manages to escape as she always dreamt, she finds her dreams futile for the world she knew has reached a stage of no return, to the one she knew.

Does Anna manage to escape the town?

While she cries in despair, Steph, who is the only alive person from their group, appears right next to them in a car. She and Nick get in Steph’s car and drive away from their school, the zombies, and their town. However, no one really knows how to answer – ‘Where to next?’ All their hopes and desires were built around leaving the place. However, the world and humanity are not in the condition for them to let them live as they hoped to.

Even if they escape the current state of danger, something else might be waiting for them on the next turn. By now, they are well aware of it and the end signifies it brilliantly with an understated approach. On that note, this impeccable blend of naïve, romantic dreaminess (and the catchy musical numbers) from La La Land and the impeccable comic timing of Shaun of the Dead ends.

Read More: Everything Coming To Shudder In November 2022

Anna and the Apocalypse Trailer

Where to watch Anna and the Apocalpyse