La La Land swiftly started its journey at the 73rd Venice Internation Film Festival and won People’s Choice Award at Toronto International Film Festival, garnering the critical acclaim & initial mileage. It soon propelled into a magical, sugary escapist phenomenon that swept off the critics and audiences alike. Initial buzz averred ‘La La Land’ as the Best film of 2016, and possibly one of the greatest films of this century. A.O Scott of The New York Times praised saying, “succeeds both as a fizzy fantasy and a hard-headed fable, a romantic comedy, and a showbiz melodrama, sun-drenched work of sublime artifice and touching authenticity.” Peter Bradshaw of The Guardian describes as, “a musical masterpiece.” Peter Travers of Rolling Stone called it “a hot miracle.”

La La Land is a beguiling love letter to the bygone musical era. Chazelle’s honest intentions to give back to Hollwyood is evident in this bittersweet story of fantasy and dreams and rekindled hope and love and heartfelt romance. Set in the backdrop of rosetinted cityscape, shimmering with bright colors and stars (Emma Stone and Ryan Gosling), La La Land opens with a lucullan single take shot of “Another Day of Sun.” Vibrant and attractive young crowd pouring out of their cars in traffic jam, and splashy colors thrown in, and the loud music foretelling the sacrifice & struggle they will make in the city of dreams. It perfectly sums up the film in a way.

We were seventeen, but he was sweet, and it was true
Still I did what I had to do
‘Cause I just knew.” 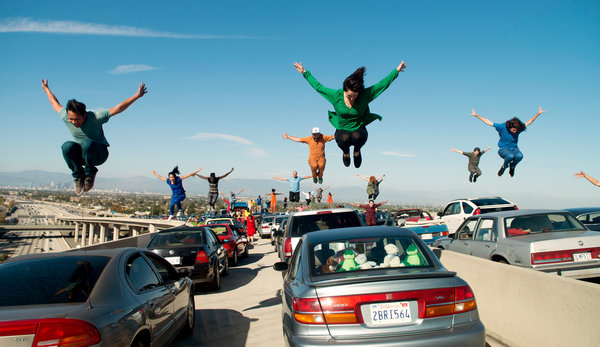 The film was riding on the lofty expectations, and after watching it in IMAX, I didn’t feel the same zing that every critic has been enthusiastically hollering about. Certainly, ‘overhype’ was responsible for the damage.

Recall 2011 when incredibly brilliant films like The Tree of Life, Midnight in Paris, Hugo, The Descendants, Tinker Tailor Soldier Spy were competing at the 84th Academy Awards, but it will be hard to remember which film won the Best Picture that year. It was a French romantic comedy-The Artist– soaked in Black &  White silent era that bagged five awards. If you remember ‘The Artist’ won the Best Picture award, it might be to courtesy that it won over the most accomplished and deserving masterpiece ‘The Tree of Life’, Hugo, Midnight in Paris. Five years down the line, mostly people do not remember The Artist and it will be difficult to find it on the list of the Best films of this decade or century. But certainly,  you will find ‘The Tree of Life’, Midnight In Paris, Tinker, Tailor,Soldier, Spy making the cut.

La La Land will receive the similar fate. It will win major awards at the 89th Academy Awards but, let’s say ten years down the line, most people won’t remember it, except when someone talks about the most overhyped film or the musical films of 21st Century. La La Land is a fairytale that offers a fanciful dream, a wet dream, a sugary escapism to this politically religiously crippled world, but Manchester by the Sea, Arrival, Moonlight are the films that will be subconsciously etched in the brain for the profound emotional catharsis that will be difficult to shrug off.

A struggling actress (Mia) meets a Jazz savior (Sebastian).They meet twice.Ironically, Mia is not a fan of Jazz, but she is drawn to a Jazz tune (Mia and Sebastian theme) that Seb plays. Then they meet cute and fall in love. They are good looking couple, but their chaff lacks zing, their romance feels constrained. If you look beyond the dancing and singing of Seb and Mia at the Mount Hollywood drive that injects the gorgeous view of city in the backdrop (A Lovely Night), and the dream-like eyegasmic sequence at the Griffith Park Observatory, you might realize how the glossiness and whimsical attribute of the film have overshadowed the lack of romance and the sagginess and dullness of the second act.

Mia is a very strong headed and career driven individual. The character feels daunted when Mia seek acknowledge of Seb, not once or twice but thrice in the film. Mia seems to agree to everything Seb says. After the failure of the audition, Seb advice to write her own story and she do it. On one occasion, Sebastian encourages Mia saying, “Keep Struggling. Creative passion is fuel for the Soul.” On the other occasion, when Mia was broken by the failure of her single act play, it was Seb who dragged her out from her home back to the LA. While Seb has been preaching about “keep struggling..” he gives in to the pressure of making money for something he hated his guts. His obsession and insurmountable effort to save Jazz goes for a toss.

Chazelle substantially invigorates the nostalgic factor, and frequent references to Singin in the Rain, The Young Girls of Rochefort, The Umbrellas of Cherbourg, West Side Story, Moulin Rouge, and Rebel Without a Cause feels like montages of paying homages that result in the inconsistent screenplay.

Chazelle has smartly divided the narration according to the season which acts as a metaphor. Life has different seasons and likewise various struggle and different people to accompany you through it. Driven by passion and achieving dreams means sacrifice, and that sacrifice can be any kind of–friends, love, and relationship. The end justifies all those hopelessly naive people on their cars during “Another day in the sun.” Mia has achieved her dreams, so has Sebastian. Do they regret choosing their goals over the half-baked romantic relationship? They should not. Then the entire second act takes away the credibility of both the characters.

La La Land is not a bad film, not at all, but it is not as good as people & critics are raving.