Finnish film-maker Juho Kuosmanen’s feature-film debut The Happiest Day in the Life of Olli Maki (2016) chronicles the days when the promising 26 year old Finnish boxer Olli Maki went up against the American Davey Moore for the 1962 Featherweight Boxing world championship. But don’t be misled by the title or by the plot-line. It is bittersweet and light-hearted, although it’s entirely different from movies like Rocky. Juho Kuosmanen ponders over his subject’s personality rather than dive headlong into Olli’s professional boxing career. The result is that you get a universal story of a young man, fearing upon whether he would live up to attain his ambitions and dreams. In 1962, Olli Maki, known as ‘Baker of Kokolla’ was a European amateur championship. He has won 8 out of his 10 fights. The very small European country geared up to host world boxing champion. Coached by retired boxer Elis, Olli was asked to shed weight (under 57 kilos) that would enable him to fight in the ‘featherweight’ category. Elis brings in the media limelight and the attention of wealthy men to widely sponsor the match. The entire nation pinned up its hope on Olli, who was up against Davey Moore, an American boxer with 64 victories to his name. Olli finds the situation a bit overwhelming and frustrated enough to carry the ‘national hero’ tag.

The Happiest Day in the Life of Olli Maki doesn’t provide any of the aforementioned background details. The happiest day ought to be August 17th, 1962 because that is the day he is fighting against the American. But, the film opens few weeks before in the Kokolla town (repeatedly addressed by Elis as ‘some backwater town’) and Olli (Jarkko Lahti) is escorting his sweetheart Raija (Oona Airola delivers a fantastic low-key performance) to a wedding. Olli is different from the usual boxing heroes. His diminutive stature (remember he is in featherweight category) and the very introverted personality remains as the exact opposite of the ferocious punchers we see in boxing films. The running joke is that the tiny nation tries to find loads of inspiration and hope from him, while Olli himself is filled with doubt and lacks confidence. Olli fumbles even when he is escorting his girl to the wedding. He is not dressed properly and borrows a suit. He borrows shoes which are of larger size and so stuffs in some newspapers. His car breaks-down and so he takes Raija in a cycle. Things don’t seem to go according to this humble baker’s plans, who fought now and then in a boxing ring among the small audience of his small town.

Elis Ask (Eero Milonoff), the former boxer and coach/manager, is an imposing figure and his eyes withhold the ferocity of a boxer. He knows that Olli is out of his depth compared to the highly professional nature of the American opponent. Yet, Elis has his own reasons (some selfish) to turn the boxer with small shoulders into ‘national prestige’. Elis not only uses the documentary crew to ingrain an image on public forum, but also raises the financial stakes by bringing in rich businessmen as sponsors. This pushes the introverted boxer to spend more time on advertisement, parties, interviews, etc. Furthermore, the love Olli feels for Raija complicates things. Olli brings his girl to Helsinki city as he is shoved into the disquieting limelight. She could be either seen as a distraction for Olli to achieve the coveted title or she could be the only thing that matters in Olli’s life. Of course, Elis sees her only as a distraction (‘this is the shittiest moment to fall in love’, he says).  You know they say that ‘happiness is a state of mind, not an emotion’. Elis Ask desperately wants August 17th, 1962 to be the happiest day of their life, but the distracted demeanor of Olli seems to experience happiness only in the tenderest moments he shares with beautiful Raija. 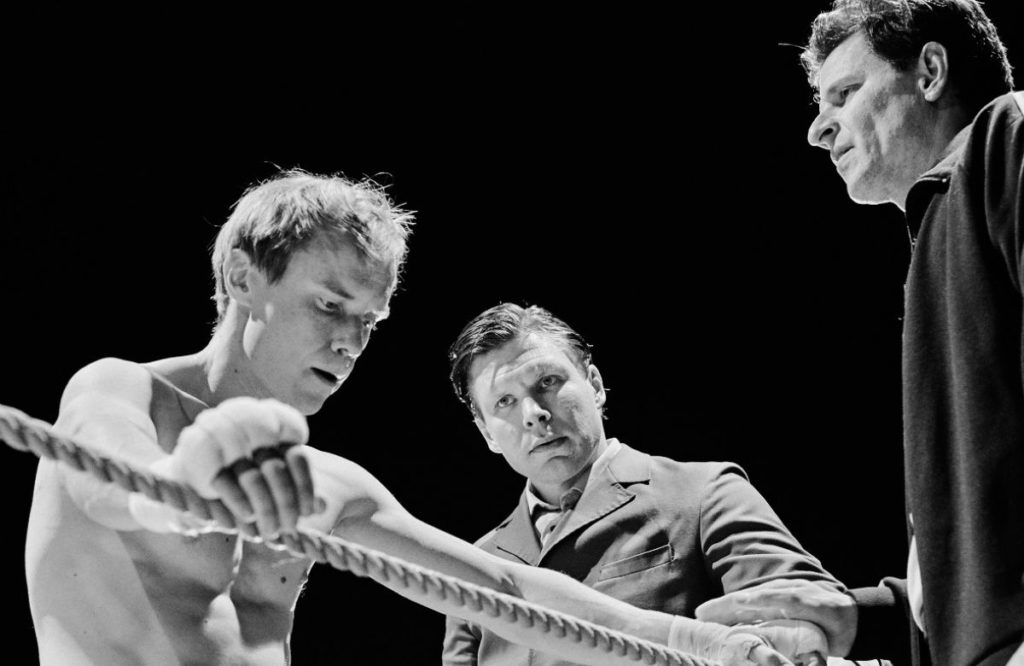 The Happiest Day in the Life of Olli Maki is a very beautiful and painfully melancholic movie. The black-and-white cinematography adds a lot to its lyrical quality. Juho Kuosmanen and his Dp Jp Passi decided to shoot the film on 16 mm Kodak Tri-X black-and-white film stock (usually used for news footage at those times). Without any color grading or post-production works, this naturally takes us back to the 1960s. They actually ordered all the Tri-X available in Kodak warehouses from Europe and USA. It might have been an exhausting process but in the end this distinct monochrome color scheme perfectly suits the narrative. More than being a good aesthetic choice, these striking visuals makes us easily connect with the subdued emotions on the frame. As I mentioned before, director Kuosmanen is intrigued more by Olli and how he perceives his atmosphere than on the hoopla surrounding the match. He finds unbridled beauty in simple moments and fills the proceedings with dry comical and playful moments (bathroom water fight). In one scene, we see Miss Finland receiving the American fighter Davey Moore. The documentary crew asks her to kiss Moore in the cheek over and over until they get it right. Elis’ trip to the sponsor’s house during the rainy night was another hilarious instance.

The director suggests that Olli and Raija are made for each other, not just through their mutual feelings of love, but also by chronicling their feelings of unease in the urban existence. Both of them feel like a fish out of the water while navigating through the Helsinki city. In one bittersweet scene, Raija desires a fashionable haircut to confirm to the city’s style. After the hair-cut she feels discomfort and rolls the hair back to old style. Through these little moments, the director keeps on staging the characters’ unease with the increasingly fussy environment. These subtle details also help to reinvent the boundaries set for a biopic feature. It is understandable on why the film would be a disappointment for many viewers. It never invests itself in the underdog narrative thread. There’s less concentration on Olli’s boxing techniques or sparring matches. Instead, we see the arduous tasks (taking fully-clothed steam bath) followed by Olli to keep his weight within 57 kilos. And, while it formally looks brilliant, narrative wise the trajectory is predictable (even if you aren’t aware of the real story). Yet, the contemplative attributes and the mystifying lingering shots (that captures nuanced expressions) overshadows the well-worn elements.

If you could observe some of the on & off-screen details, you can savor the meta-narrative quality of the film. The documentary crew, which tries to chronicle Olli’s rise to the top, intends to cue the heartstrings; it adds false layers to the boxer’s reality. This whole process reflects the true nature of the biopic film-making. Like Olli Maki, director Kuosmanen itself seems to have been plagued with the dilemma of whether he should follow the trajectory that matters to him or to blindly follow what’s expected of him. Both the boxer and director Kuosmanen have hailed from the same town (Kokolla). We don’t know if they chose the right path, although we definitely feel that they chose what mattered to them. The casting of Jarkko Lahti and Eero Milonoff as Olli and Eelis adds further layers to the meta-nature. This is Lahti’s first lead role, while Milonoff is an experienced actor. Their on-screen dynamics seems to reflect the similarities off-the-screen. 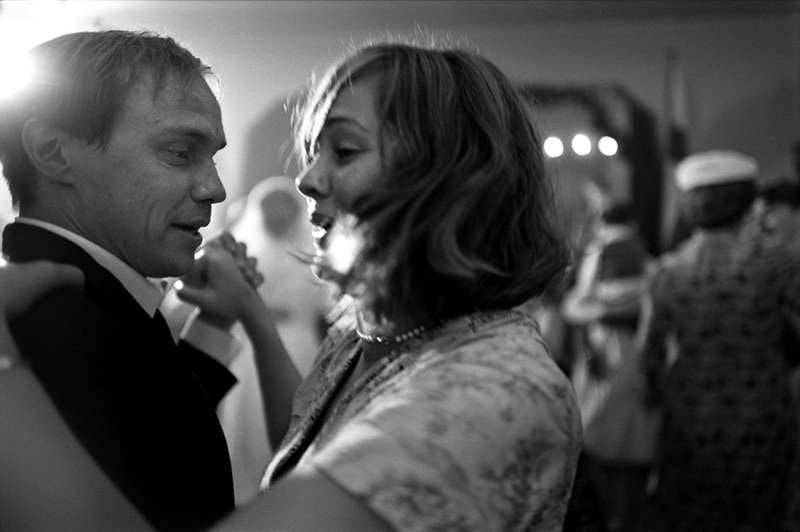 Elis’ character may also be a stand-in for the producer, who neither gets a boxing drama nor a perfect period piece. Director Kuosmanen said in an interview that his producer related with Elis and hoped the character isn’t seen as an ‘asshole’. All this meta-quality turns the narrative threads as a representation for art house film-making itself.  Similar to the titular character, the film-maker too keeps his focus on the beauty and sadness of everyday life than succumbing to the collective desires of ‘others’. The vital addition to the Meta quality comes at the very end. Olli and Raija walks by the river and an old couple walks past them. Raija asks ‘will we become like them?’ The beauty inside the frame is escalated if you know the fact that the ‘old couple’ walking past reel characters is the real Olli and Raija (80 year old Olli is now suffering from Alzheimer’s and Raija takes care of him). This film may not have an overt inspirational, feel-good tone, but this particular last frame strongly resonated with me: a representation of how innocence and true love have survived in an environment that wants to mortify one’s self.

The Happiest Day in the Life of Olli Maki (winner of the Un Certain Regard Prize at the 2016 Cannes Film Festival) is a visually resplendent, bittersweet tale of a man who is at odds to fulfill the manufactured large than life persona. Despite being the story about a boxer, it takes a highly contemplative approach than the usually desired action-packed tone.