Time has passed, and the world has changed. Among the new, there remains a confusing fascination with the old; and when these two collide, a clash of ideals exists. Director John Michael McDonagh aims to provoke his audience to see the conflict between modern indifference, old world accountability, and the rashness of youth to seek the escalator to glory. Starring Ralph Fiennes, Jessica Chastain, and Matt Smith in pivotal roles, The Forgiven (2022) is a pensive offering that touches upon this and makes you explore the other perspective, introspect, and come to an understanding. Even after viewing what happens throughout the film, should one decide not to; well, that’s taken care of as well.

The Forgiven commences with a rich British couple, the Henningers, arriving at a port in Morocco. Whilst trying to locate their destination in a dark and desolate desert, they drive their car into a boy. It is from here that their actions set in motion a series of events. These affect them, their fellow guests, the hosts, and the lives of the locals.

David Henninger (Ralph Fiennes) and Jo Henninger (Jessica Chastain) see the locals as a tad dangerous, but it’s mostly David Henninger who appears as the snobbish bourgeois elitist. There is enough to show that certain pre-conceived notions are justified, but that could also be viewed as immaturity on the part of impressionable individuals. Hence, one can’t fault McDonagh for explicitly seeming to show one side as backward. In fact, he does the opposite with language proving not to be a barrier and attire proving that only what covers one isn’t justification enough to view some as classy. One small lapse in concentration (to be fair, he didn’t have enough time) allowed for the facilitation of this intersection. 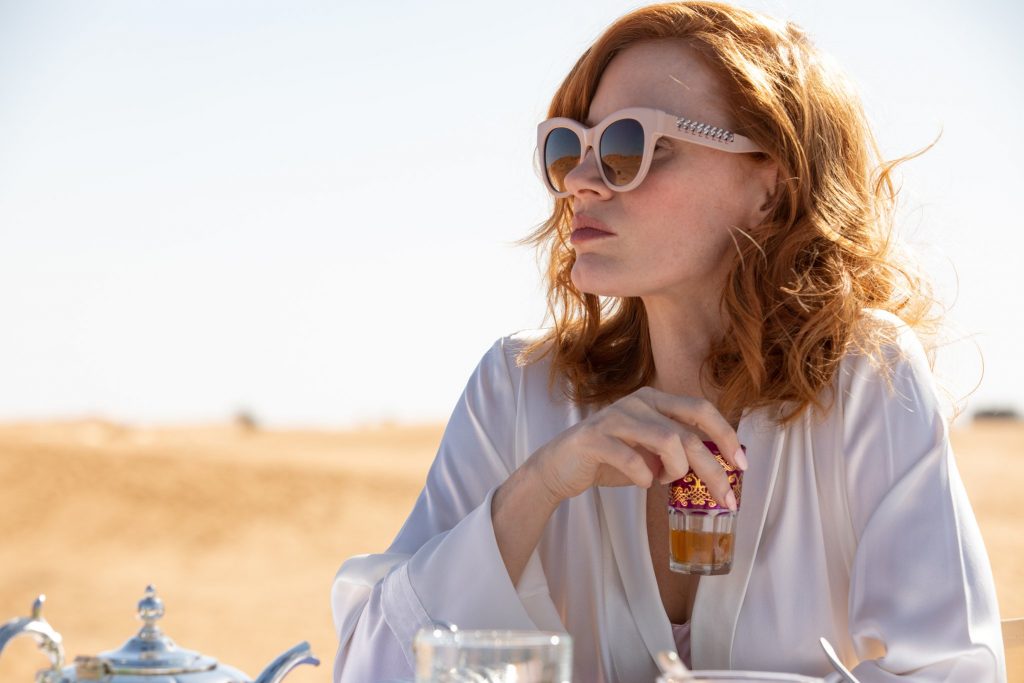 Mr. Henninger decided to atone. He did the noble thing and indirectly seemed to free his wife, providing her the opportunity to explore and discover herself. It is through this that we get to see the drastic before and after with the modern indifference. The expression on the employee’s face as he looks through the window paints a startling picture.

A similar take emerges with David Henninger’s mannerisms, even when the traditionally expected expression is remorse. A scene in The Forgiven reminded me of Parasite. Like the Academy Award-winning film, the moment showed how one person’s oblivious enjoyment is an insult to another’s sorrow.

The film plays upon the audience’s expectations of the Orient. This helps add a bit of intrigue and keeps the viewer excited/apprehensive about possible retribution. While the director does so with explicitly written subtitles, he drops subtle cues to push the audience towards thinking on these lines as well. The use of the knife to offer food is overdone, but it does breathe a bit of life into the film if you may be dozing off. Mercifully, these cues are used quite often to retain your interest and keep you from meandering into a thought process; one where you lose interest and wonder why certain scenes made it to the final cut. There is one scene where the three locals and Ralph Fiennes stand atop a cliff and stare out into the Sahara. It touches upon a particular request; fair enough. But that would have been satisfied with the shot from behind.

A representation of the extravagant home within the desert may seem unnecessary. However, it does its part as it enhances the contrast between the elite location (whose owners aren’t given a really polite name) and the abode of the grieving family. Kudos to the production design team for enhancing this aspect in a big way.

The acting remains astonishing with Jessica Chastain and Matt Smith shining brightest. Smith dominates the film and comes across as the one character I would remember long after the film is done. Ralph Fiennes’ transformation is evident with the veteran actor living up to the titular theme.

Overall, The Forgiven will test your patience if you are expecting a swift revenge thriller. You may even begin to expect an Agatha Christie-like offering as the party villa in the desert setting gives major Death On The Nile vibes. The film doesn’t give you that, but it offers you plenty of scope for introspection.

It reminds us that no matter the location or the attire, human reactions and emotions remain the same.