Home»Reviews»Everything Everywhere All at Once (2022) Review: A Spellbinding Multiverse Story Led by the Phenomenal Michelle Yeoh
Reviews

Every person in their life has at least looked back once at their life and thought about the choices and decisions they made to get where they are right now in life. How they got there and what would have happened if they had made the other choice and then where would their life be. It is easy to get lost in the world of what-ifs but sometimes those questions lead you back to appreciate the life you have with the people you are with. And with Everything Everywhere All at Once, Daniels explores those questions with a dash of nihilism with an aging Chinese immigrant who gets swept up in an insane adventure, where she alone can save the world by exploring other universes connecting with the lives she could have led.

Evelyn Wang (Michelle Yeoh) is a Chinese-American woman struggling to run a laundromat with her husband Waymond (Ke Huy Quan). Tensions are high in the household due to the laundromat being audited by the IRS after Evelyn incorrectly filed her taxes. On top of that, Waymond is trying to divorce papers to Evelyn, her father, Gong Gong (James Hong) has just arrived from China, and Evelyn’s daughter, Joy (Stephanie Hsu), has been trying to get Evelyn to accept her girlfriend, Becky (Tallie Medel). As Evelyn arrives at the IRS office to meet with IRS inspector Deirdre Beaubeirdra (Jamie Lee Curtis), she meets the alpha version of Waymond who explains to her that there are parallel universes that her alpha counterpart invented. And they all are in threat from Jobu Tupaki (Stephanie Hsu), who intends to destroy the multiverse and it is up to Evelyn to save the world. 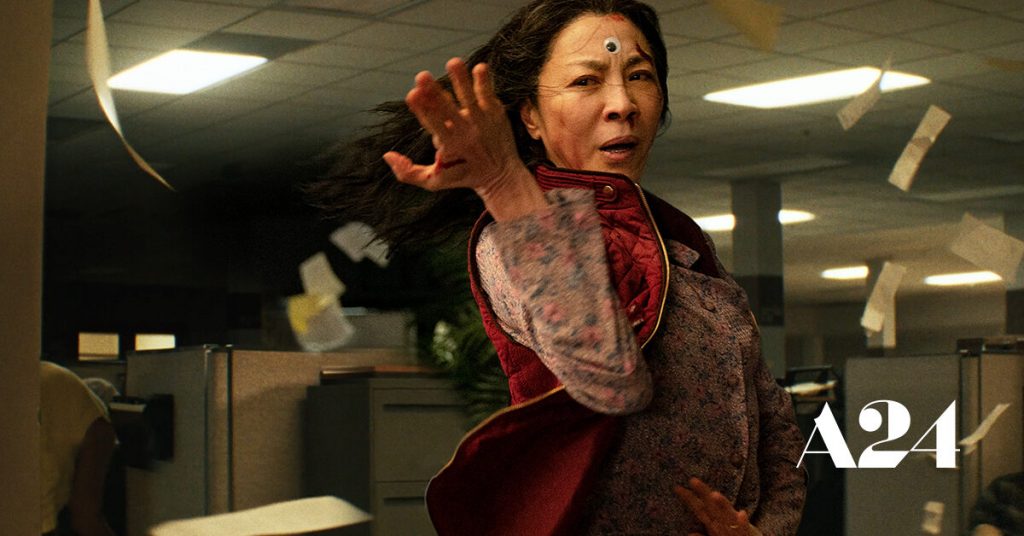 From the moment we lay our eyes on Evelyn we know whatever glow there once was has faded away. She is worn out and swamped by bills and receipts she has to put in for the audit. She is trying her hardest to be in control of everything all at once. She has lost all hope and love for her husband and mostly orders him around. Her relationship with her daughter has grown distant since she started dating a girl. She picks up a hobby but never finishes it. All in all, she’s a master of none. And currently, she is at her tipping point, ready to give up, until, life gives her another chance by pulling her into an adventure in the multiverse to save the world and herself.

The concept of a multiverse is a complicated one to structure in a story. It is very easy to get lost in the development of the world and forget the character and move through the plot. That is why you have to appreciate what the Daniels were able to pull off here. They created a world of parallel universes without straying away from the characters. Every multiverse they show has importance in Evelyn’s character growth and her realizing what the hell is exactly going on. The Daniels cleverly use Waymond as a bridge to simplify the world they have created for both Evelyn and the audience. But they keep enough mystery going through subtexts which the audience picks up through the emotional growth of Evelyn and Joy.

The action set-pieces give vibes from the old kung-fu movies and are thrilling to watch. This is where Ke Huy Quan’s Waymond shines bright along with the scene where he pulls off his best Tony Leung look and makes you fall in love with him. The Daniels take inspiration from beloved movies like In the Mood for Love and Ratatouille and re-create their versions in a lovely and whimsical way. And the universe where Evelyn has hot dogs for fingers somehow gives out a beautiful love story sprinkled with humor. If we take a close look at each story in Evelyn’s parallel universe we start to realize how each one of them gives a lesson related to Evelyn’s current life.

While the movie is extravagant in its presentation of the multiverse, the soul of the story lies in the relationships and the meaning of life. The core of cause and effect of this multiverse Evelyn gets pulled into is because she has to repair and confront her relationships with her husband, father, and most importantly her daughter. The Daniels make use of the chaos to showcase how the world can go into a whirlwind of hopelessness when you stop being kind to one another. And most importantly when you lose your spark and don’t believe in yourself as there is a whole untapped version inside you that wants to come out, you just have to take the chance.

Leading Everything Everywhere All at Once as Evelyn is the phenomenal Yeoh. The way she embraces every version of her character is a delight to watch. The emotionally dramatic scenes she has with her on-screen daughter Joy, played by the brilliant Hsu are highlights of the movie. And the scene she has with Quan (so great to see him back on the screen) in the alley just seeps you in the mood for love.

Everything Everywhere All at Once is a spellbinding multiverse story about a family that has to find its way back to each other. Daniels goes spectacularly grand in their presentation and execution of the story, which lets the audience fall in love easily and leaves them with a wave of tears. With one of Yeoh’s career-best performances along with strong support from Hsu, Quan, and Lee-Curtis, Everything Everywhere all at Once is required viewing for everyone who loves cinema.

Everything Everywhere All at Once Official Trailer