Honestly, 'Heavy Trip' could have restrained or transcended its outlandishness to be that rare heartwarming comedy about an ostracized music subculture. For now, it’s a watchable, fairly entertaining comedy without much heart in it.

The cold and long Scandinavian winters, enshrouding its lush and intimidatingly vast landscape, has conjured the need for heavy metal music. Strewn with dark themes derived from Norse mythology, metal music is often dubbed as dangerously weird and a provocateur of violence. It has faced undue discrimination and harsh generalizations. The metal-head or headbangers’ blast-beating music to purge themselves from the feelings of alienation and their preferred outre attires plus make-ups were instantaneously dismissed as satanic and barbaric. Lately, cinema has warmed up its depiction of metal culture. We’ve had Metalhead (2013), an Icelandic drama about an alienated teenage girl grieving over her brother’s accidental death by seeking solace in heavy-metal music. Then there was sorrowful true-crime drama Bomb City (2017), stressing the unfair treatment and crime committed against a group of angry, middle-class Texan adolescents for their preference in music. Counterbalancing these serious-minded approach, Finnish film-makers’ Juuso Laatio and Jukka Vidgren’s Heavy Trip (‘Hevi reissu’, 2018) takes the familiar underdog route and attempts to offer a hilarious ode to metal music connoisseurs, marked with bouts of eccentric behavior.

Just because Scandinavia is world’s capital to ‘symphonic post-apocalyptic reindeer-grinding Christ-abusing extreme war pagan Fennoscandia metal’, it doesn’t mean the local populace is appreciative to metal scene. Living in the remote corner of Finland, the long-haired leather-jacket wearing Turo Moilanen (Johannes Holopainen), the lead singer of an unaccomplished metal band comprising of his childhood friends, naturally provokes lot of verbal abuses and frowns from his fellow villagers. Cycling through the blissful, green landscape, Turo often encounters the word ‘weird homo’. He brushes off the expletive and heads to his guitarist friend Lotvonen’s (Samuli Jaskio) den, situated below his family’s reindeer slaughterhouse, in order to honor the metal gods by playing classic hits. Playing alongside Turo and Lotvonen is chubby, wild-eyed drummer Jynkky (Antti Heikkinen) and bassist Pasi (Max Ovaska), who recites his encyclopedic knowledge of metal with a dead-pan stance.

Turo works as an orderly at a mental institution. But in their free time the lovable team of outcasts dreams of gaining fame and recording their first song. Finding inspiration for the first song isn’t a very easy job, but Lotvonen, blessed by the malfunction in the meat grinding machine, uses the thumping sound made by the stuck reindeer carcass to discover the perfect tune. The quartet catches a possible break when a music festival promoter accidentally comes to the slaughterhouse. He leaves the place with the group’s demo. Turo casually confides the slight possibility of playing a gig at the Norwegian festival to his love interest, a local florist named Miia (Minka Kuustonen). Soon the news spreads throughout the town, turning them overnight into local celebrities. The boys enjoy their newfound recognition, although the gig may not happen at all. 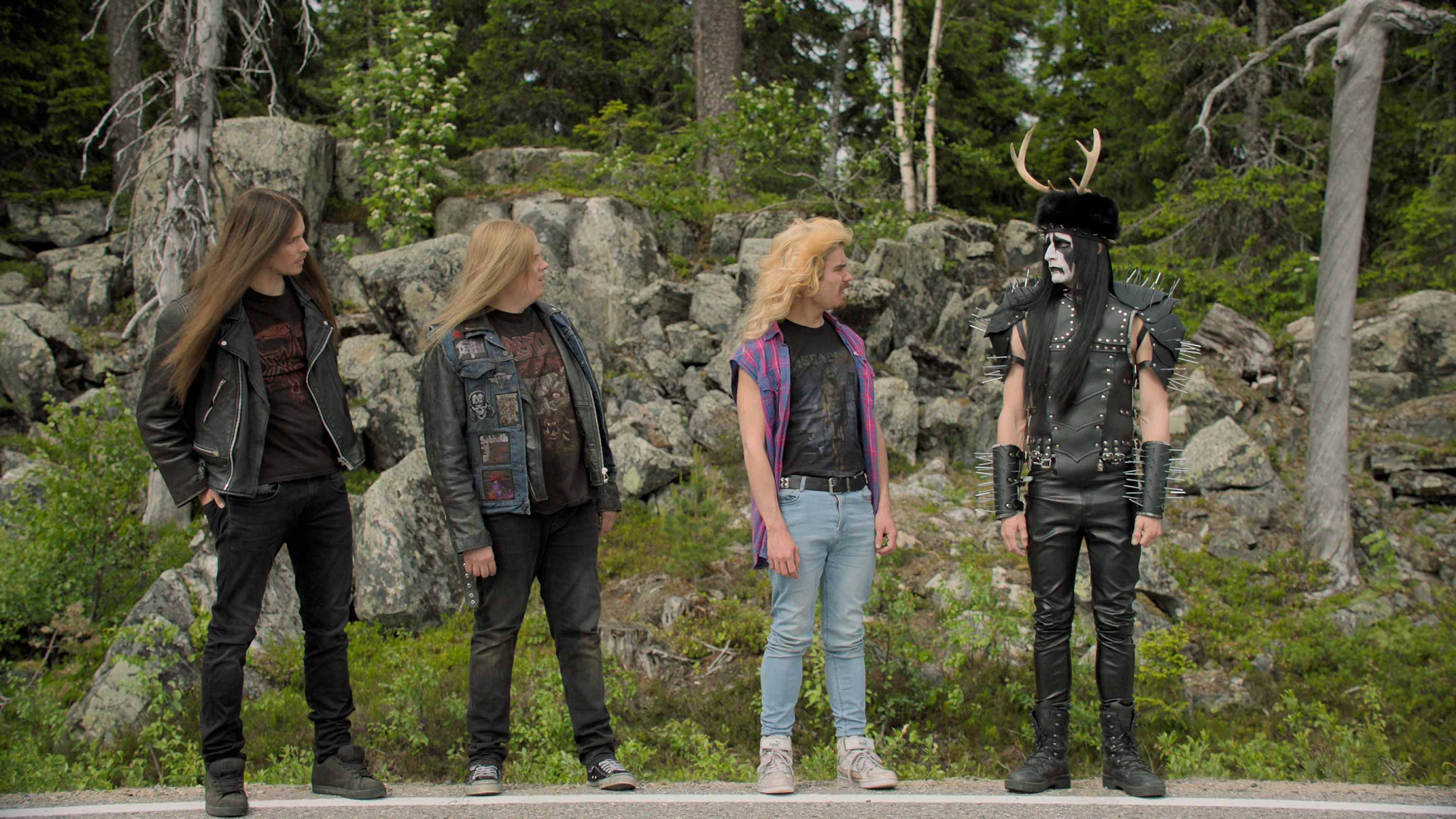 The first-half of the narrative, bringing forth the characters’ idiosyncratic eccentricities, their understandable immaturity, and devil-may-care attitude perfectly sets up the quirky comedic tone, which is not far removed from their inner feelings. The dead-pan humor pays due homage to Rob Reiner’s This Is Spinal Tap (1984), especially Mas Ovaska’s Pasi who delivers wry jokes with a straight, mopey face. The four guys’ weirdness and kinship immediately makes us see them as underdogs whose individuality we immediately root for, irrespective of their recklessness and stupidity. Even though the writing cooks-up familiar narrative dimensions during these initial parts, the comedy of manners mixed with top-notch acting ensures utmost jollity and emotional restraint. Subsequently, after a muted middle-part, the narrative takes up an abrupt tonal shift and veers into a maniacally wild territory.

Idle, weapons-crazy Norwegian border guards, grave robbing, extracting a mentally-challenged patient out of the institute, Viking ships, and vomit that flows like projectile missile, which all may sound like epic comedy on-paper, but it didn’t work for me. The absolute bonkers of a tonal shift towards the end tries to bring forth a crazy, kooky laugh-riot. Nevertheless, there’s total detachment from characters and the constant amplification of the scenario hopes to generate laughs just for the sake of it. The final stretch is tonally close to  the climax of Waititi’s ‘Hunt for Wilderpeople’ (2016). However, Waititi’s works often contains some emotional truth, however ridiculous and goofy the situation is. In other words, Waititi delicately balances between the serious and silly. Heavy Trip simply eschews the somber tone and adds too much of the sugary content, burying its messages of self-acceptance and non-conformity under the overly dopey humorous set-pieces. The film gets too generic that eventually instead of celebrating the quartet’s passion for metal music, we sort of receive a lengthy spoof about metal fandom. Honestly, Heavy Trip (92 minutes) could have restrained or transcended its outlandishness to be that rare heartwarming comedy about an ostracized music subculture. For now, it’s a watchable, fairly entertaining comedy without much heart in it.