Alpha Adimai (Alpha Slave) Review: Independent feature films made on a shoestring budget (at least as advertised) are usually somewhat easy to spot in terms of the inception of a film. The movie usually has extended dialogue scenes, the camera focusing mostly on the faces of the speaker and the receiver. Camera tricks usually are reserved for the end, when a movie mostly disguised as a thriller finally delivers a twist.

The good thing about Alpha Aldimai here is there isn’t some earth-shattering twist here. The film does telegraph who the villain is going to be. Poona, played by Eshwar, looks at the viewer as well as his comrades with cold eyes, and an even colder countenance. He is unfazed when he is slapped by his boss Mayilsamy, played by Kalki, with a mixture of swagger and normalizing relatability. Poona though regards both Mayilsamy and his brother Aaru, played by writer and director Jinovi himself, with some measure of contempt. Aaru in return looks at Poona like a punk, uncomfortable with his silence.

Later when Poona reveals his ingenuity as the movie progresses, when Mayilsamy is forced to devise a plan to escape before the cops close in on him, and Aaru is unable to find a getaway vehicle, Poona’s plan in hijacking one of their customers’ car is the domino which starts falling, beginning the chain of events which causes the movie to reach its slowly-simmering and ultimately boiling climax.

The two customers, on the other hand, played by Vinod Varma and Arun Nagaraj are two pretentious rich guys out to score weed and get tangled with the cops and finally with the dealers as this crazy night unfolds. What keeps Alpha Aldimai from ultimately becoming a slog is its pace. At 88 minutes long, the movie moves at a breakneck pace, ensuring that the mostly-predictable thriller with its twists and turns you could see a mile away, doesn’t lose the viewer completely. It works mostly when it sticks to its fairly simple plot about these 5 people, bound together by this crazy night, on a journey to escape. 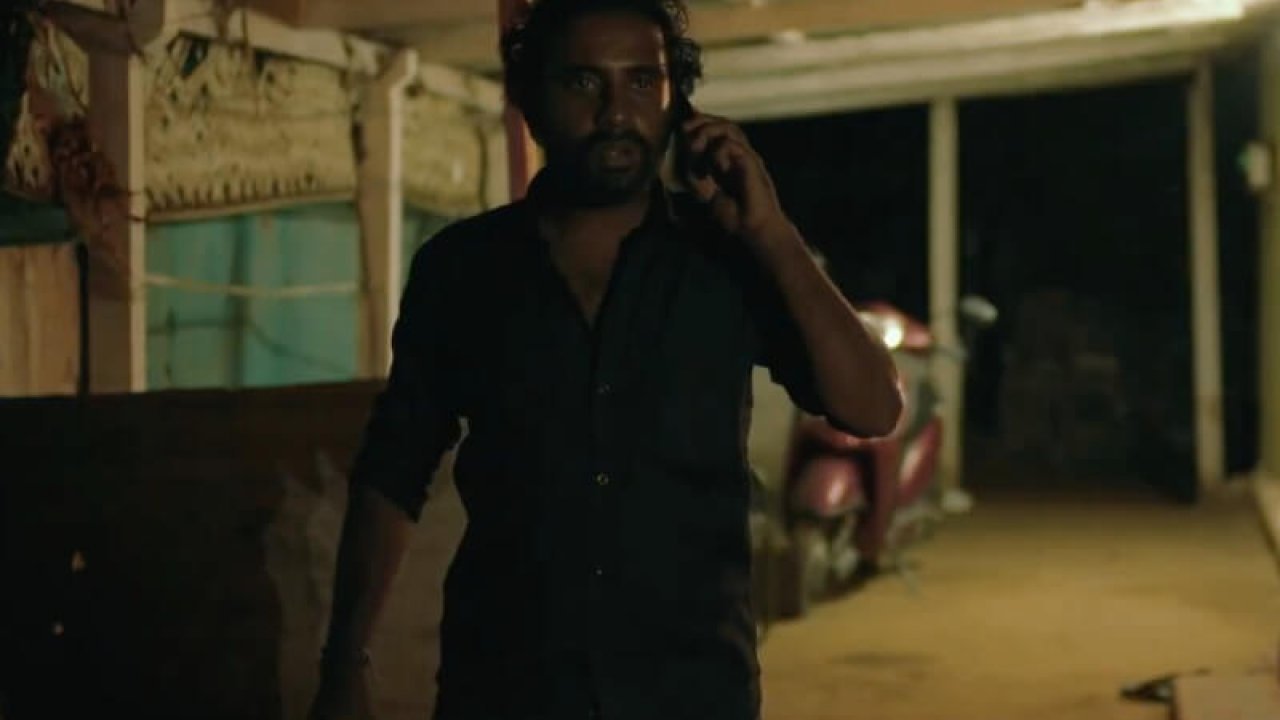 The movie’s highlights are the moments when Poona identifies the presence of the police. That revelation along with the escape of the three-drug dealers on the car of the two hapless customers are the high points of this movie. What does also works in parts is the thematic subtext Jinovi tries to bring through the character of Poona, as a character harboring a secret alpha male inside, who is threatening to come out like a coiled snake. But then again the movie has already telegraphed from the beginning who the villain is going to be, so the presence of such a subtext while ultimately understandable comes off as redundant.

What also feels frustratingly underdeveloped and unnecessary is a couple of flashback scenes between a young Poona and his mother. While their placement throughout the movie is innovative, it ultimately adds nothing. So are the unnecessary gay subtext jokes between the two hapless rich kids. There is also a running gag between Aaru and his pet rooster whose name is Kanju (translated as Cocky), while oscillates between exasperatingly dumb to hilariously dumb. This does alleviate the tension at parts, but you may have to wonder if the humor was this dumb, was it absolutely necessary to include it.

Alpha Adimai (Alpha Slave) works when it sticks to its fairly simplistic plot as well as highlighting the changing pecking order between the three-drug dealers. The filmmaking done on a limited budget is impressive to say the least, though I would have appreciated a much more muted color palette in the conversation scenes between Mayil, Aaru, and Poona, in the beginning. That muted color palette would have highlighted the grittiness better. Also, the first monologue opening the movie felt too much like a Reservoir Dogs opening while the content of the monologue reminds you of Kartik Aryan’s monologue in Pyaar ka Punchnama. Not exactly the best combination. As an origin story for a villain, Alpha Aldimai works. I am curious to see the next part of this planned trilogy.

All Fast And Furious Movies Ranked, According To Family Values