Damien Chazelle is just four films old, and he has already carved a niche for himself. First Man is a testament to the fact he is inching towards a bracket of great contemporary film-makers. Damien Chazelle’s previous three films have Jazz and obsessive, introverted lead protagonists, ready to go to any length to realise their dreams in common. His works are personal, driven by a consuming passion that reflects in his awe-inspiring journey. While Damien keeps the introverted lead protagonist for his latest film but he omits the Jazz score for First Man. It’s not a complaint as Justin Hurwitz weaves beautiful and heart-aching musical compositions that harmoniously heightened the tension and emotion of the film.

Landing on the moon has been one of the most celebrated historical events that displayed human’s determination and courage to achieve the impossible.

As Neil Armstrong quoted, “That’s one small step for man, one giant leap for mankind.”

Damien approaches the subject with a new perspective and narrates the story singularly from Neil’s personal conundrum in life. Rather than indulging in technicalities and difficulties to achieve the impossible feat of landing on Moon, Damien Chazelle breaths the soul into the Apollo mission by narrating a realistic, gritty drama about Neil’s personal life sprawling over nine years. 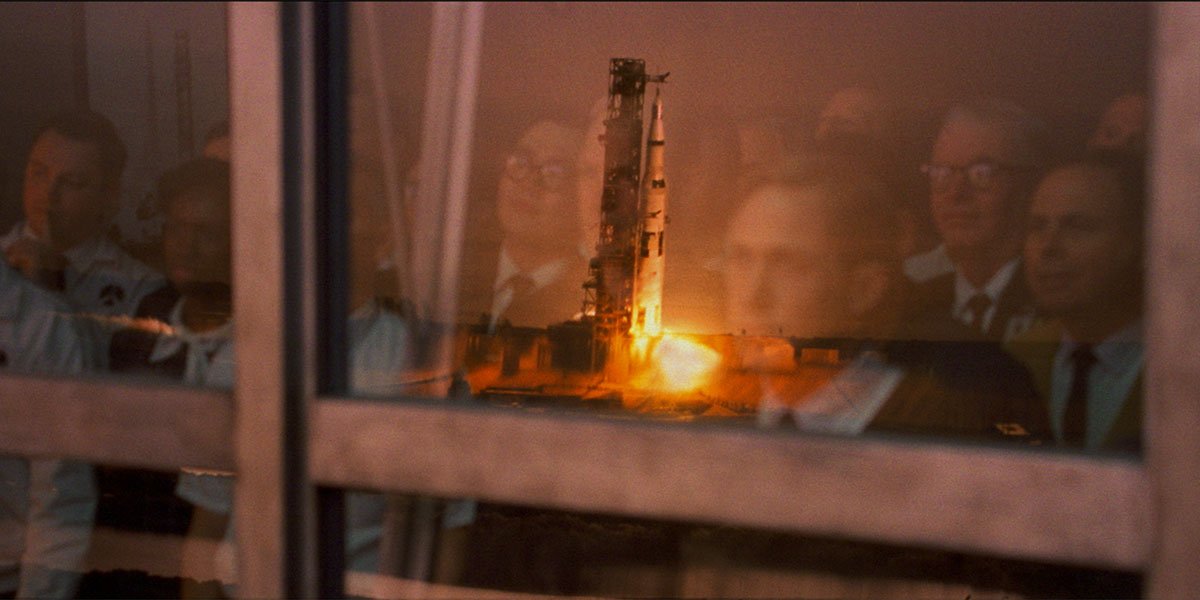 First Man is an emotional journey of Neil Armstrong coming to terms with the untimely demise of his daughter that propels him to join the astronaut program. Feeling devasted and defeated after the daughter dies of the Cancer, he strives to achieve the impossible in order to find a closure. The film is elegiac in its tone and treatment, even the thrilling moment of the lunar touchdown and the first step on the moon has a poetic and mournful undertone to it. It chronicles the personal loss of comrades at different junctures, the internalized grieving for his daughter and the far-reaching consequences on shaping the mission and Neil’s personal life.

It opens with a close-up shot of Neil sitting in a filthy, cramped cockpit with the binary switch buttons of the rocket-powered X-15 that starts violently shaking after a moment of serenity while on a space flight traversing the earth’s stratosphere. In the harrowing sequence, Armstrong loses control of the rocket, things spiral out of control to a point of endangering his life by floating off into space entirely. It is unnerving and unsettling, like the test flight and landing scenes including Apollo mission which is shot with acute tension and a sharp sense of urgency.

Damien Chazelle keeps the frame composition within the eyesight view, to evoke the feeling of us sitting in the cockpit along with Neil. The shaky camera has never been fully realised to its potential, not even in Paul Greengrass’s Bourne series. The shot composition along with the camera movement is subjective as if you are there in the moment with Neil. It does give a docudrama feel to the whole flight sequence.

Driven by Linus Sandgren’s often natural-light and granular cinematography reminiscent of Edward Lachman’s work in Carol (2015) using Super 16 mm, the flight shots have the most immersive experience seen in a long time. The blue-brighten sky horizon reflecting on glass helmet, the random fragment of light blinking outside the rocket, and the idea of an individual alone in the void, far away from the earth is exhilarating and hypnotic.

The sound design and background score are admirable the way it is utilized in the film. The heightened sound of nut bolts, switches and metal joints hurtling in the metal prototype coupled with the extreme close-up shots instils the fear of being trapped inside a funeral casket. It feels claustrophobic.

The film never ceases to enthral you with its flawless and inventive flights scenes, but the moment drama shifts to personal and social life, it struggles to keep up the pace and make the drama compelling enough to invest in the characters. The supporting casts are under-utilized and reduced to caricature. They fit like a screw bolt to join the metal prototype but they rattle a lot unnecessarily.

While the film never touches upon the political arc of the mission, the camaraderie and the social gathering in the film never rises to ascertain the emotional turbulence caused by the series of deaths. Corey Stoll’s character (Buzz Aldrin) exists in the film to confirm with the historical facts. Elliot See’s (Patrick Fugit) death fundamentally plays a critical role in shaping the outlook of the mission for Neil, as they shared the personal and professional space. But Elliot’s character is sketched in a hurry without imparting any soul to have a credible, desire consequence on Neil’s psyche.

Neil is shown as a stoic, introverted person who has a difficult time dealing with grief over personal losses. Ryan Gosling assimilates the character and internalizes his grieving, and his wooden expression helps every bit to make it look like one. He gives an understated and compelling performance.

Claire Foy as Neil’s wife, Janet Shearon, is a revelation here, and the only other character that has been fleshed out with respect and have substance. Janet is a nervous wreck who is constantly seen lighting her cigarettes. She is wistful for a normal life, but she puts Neil’s career and choices ahead of her while burdening herself with fear and trying to figure out the headspace of Neil.

First Man is a exhilarting cinematic and cathartic experience to revisit the historical event that opened the possibilities of space exploration beyond the impossible and gave a new perspective of the universe. But the film does fall short of greatness due to the single note narrative that doesn’t do justice to the journey of an emotionally turbulent man to the lunar touchdown.

The review was originally published on Taste Of Cinema.