Kaneto Shindo’s Children of Hiroshima (Genbaku no ko, 1952), based on Arata Osada’s novel, was one of the first Japanese films to deal with the nuclear holocaust. On August 6, 1945, a 16-kilotonne atom bomb reduced most of Hiroshima to rubble, killing at least 200,000 as the effects of radiation wreaked havoc on Hiroshima inhabitants long after the initial blast. Kaneto Shindo, the veteran film-maker who directed films for seven decades, captures this devastation through the elegiac melodrama set-up, provoking the long-overdue emotional response to such crimes against humanity. Though Mr. Shindo avoids the didactic approach and handles the subject matter with poignant, pensive touches, the Children of Hiroshima at times gets overbearingly melodramatic. Nevertheless, this was one of the earlier narratives to address the social problems of the postwar period with frankness. The American occupation of Japan formally ended in the same year as the movie’s release. So maybe Shindo wasn’t burdened by censorship constraints. Still, for decades there was no decent print for the film.

Renowned French film critic and theorist Andre Bazin writes, “Children of Hiroshima is an extraordinary meditation, a sort of realistic poem about the singular tragedy of our time”, and further adds, “…truly a great film that is also – alas! – a film of our times” [1]. Being a film of a particular era, the fear and terror of ‘the Bomb’ may no longer seem palpable, yet the astounding restraint with which Shindo staged certain vignettes allows us to deeply comprehend the collective anguish of postwar Hiroshima residents. A terse, chilling montage also transplants us to the fateful day – a flurry of images of Hiroshima children and infants right before the A-bomb was dropped in the middle of Hiroshima is followed by tableaus of bloodied women and screaming babies. This brief scene withholds the tragic intensity later elaborately displayed in the anime Barefoot Gen (1983) and in Shohei Imamura’s Black Rain (1989). 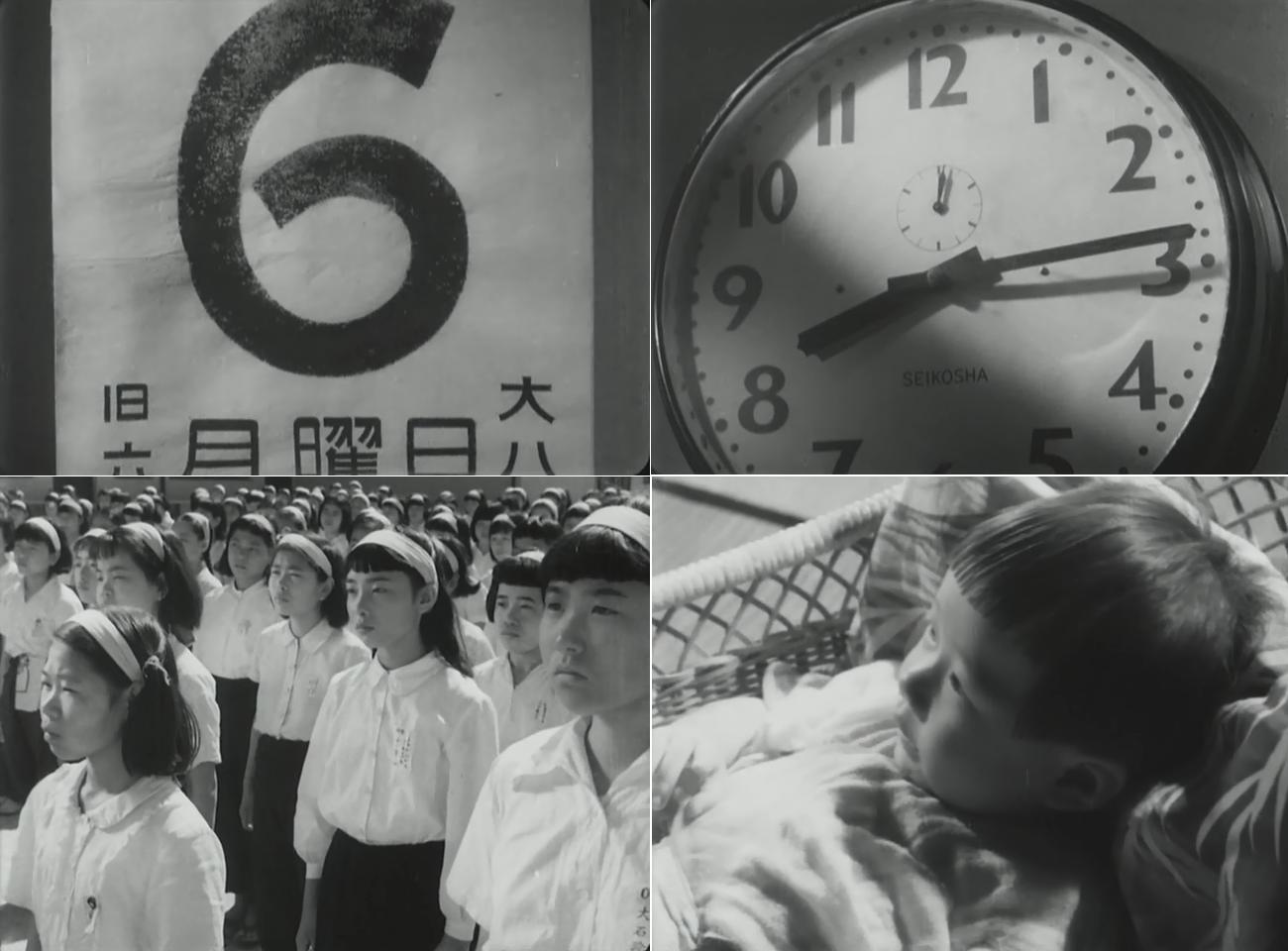 Children of Hiroshima focus on an elementary school teacher named Takako (Nobuko Otawa, Shindo’s frequent collaborator and wife) who during the summer holidays decides to pay a visit to her home town, Hiroshima. Takako worked as a kindergarten teacher in Hiroshima in August 1945. She miraculously survived the apocalypse but her family, friends, and students were maimed and killed by the bomb. Returning to Hiroshima after a gap of nearly six years, Takako pays respect to her deceased family and determines to track down the surviving students of her kindergarten class. While walking through the streets, she has a chance encounter with a blind beggar. He happens to be Iwakichi (Osamu Takizawa), an old man who worked as her father’s assistant.

Related to Children of Hiroshima: 10 Distressing Films on the Potential Aftermaths of a Nuclear Holocaust

Bearing hideous burns on his face and withholding anguish deep inside, Iwakichi initially feels ashamed to see Takako. But she insists on staying the night in the old beggar’s shack and learns that his six-year-old grandchild Taro is the only living member in his family. Unable to raise the child, Iwakichi has sent Taro to a local orphanage.  Takako pays a visit to the orphanage and also meets three of her former students, experiencing first-hand the war’s devastating impact on the Japanese psyche. She requests Iwakichi to send Taro with her, but the grandpa resists the idea fearing that he’d be robbed of the only reason to live.

Born in 1912, Kaneto Shindo was one of the prolific masters of Japanese cinema, writing more than 200 scripts and has directed 40+ films. Known best for his quasi-documentary tone – effectively established in his 1960 masterpiece The Naked Island – and for weaving religious themes into a narrative tapestry, Shindo dramatized scenarios awash with social criticism. In Children of Hiroshima, although the central narrative arc is swamped with melodramatic excess, Kaneto Shindo orchestrates a number of dexterous, expressive devices to retain a sense of understated melancholy about the human condition. Each of Takako’s experiences in Hiroshima, apart from the Taro story-line, is brilliantly restrained and precisely captures the enduring suffering of the tormented souls. 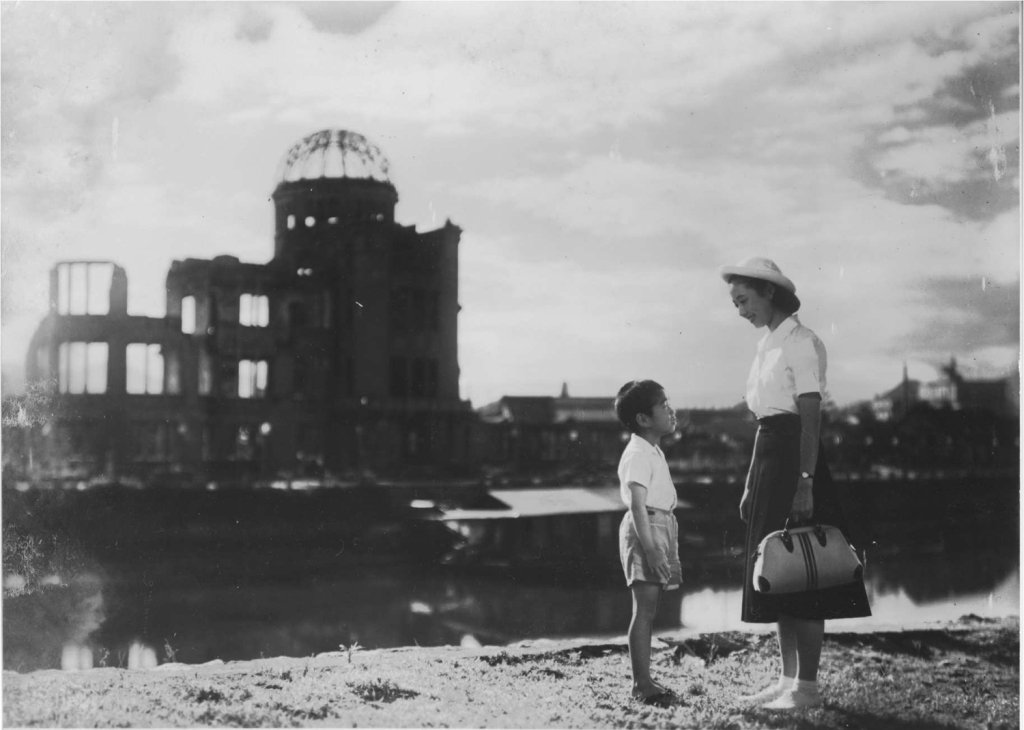 In one sequence, Shindo creates greater emotional resonance by capturing the peaceful demeanor of a child (affected by radiation poisoning) in her deathbed who declares, “War is hell!” While meeting another student of hers, Takako finds hope in the way surviving offsprings of a family, devastated by the A-bomb, come together to heal their collective emotional scars. The innate goodness of the boy as witnessed when he fondly addresses his former teacher or when waving her goodbye might be simple moments. But Shindo packs such allegedly prosaic sequences with vibrant energy. Shindo was a career independent film-maker and he often adds power to his scenarios by shooting on location. Here, the freewheeling kids diving and swimming in the city’s river or an anxious kid running across the city to fetch his toiling mother to save his ailing father is rooted in tangible realist representations. It pushes us to cherish the importance of Children of Hiroshima’s images despite its pushy cinematic engagements.

While Shindo seemed to have meditated too much on old man Iwakichi’s conflict, he offers an intriguing finish; one in which the old man immolates himself, indicting the cruelty of war and relieving Taro from the burden of his miserable past. Shindo also ends the narrative with a most memorable moment. As Takako is about to embark on the ferry with Taro, an airplane passes overhead. We don’t see the plane, but Taro is excited to see the plane whereas Takako and her friend tensely watch the sky as if the air-raids are back. It’s a powerful moment showcasing how the ripple effects caused by the trauma of war will haunt that generation’s perception in spite of finding hope of sorts in the child’s exultation. Children of Hiroshima ends with placid shots of the island city. The natural beauty of the island doesn’t seem to have witnessed such inhumanity. Kaneto Shindo’s piercing visual document, however, would keep reflecting the evils of war, waged to fill the coffers of few and many coffins.