House of My Fathers [2018]: ‘MAMI’ Review – An Allegorical Tale on Diverse Events from Sri Lankan History

“House of my fathers” is an allegorical, macabre tale of two rival villages with a strong undertone of history and politics. The profound philosophical metaphor of two warring nations and the subsequent collateral damages are addressed poetically in this grimly narrated story set in a gritty and evocative land of Sri Lanka.

Two villages, referred by the language – Tamil and Sinhala, are united by the mutual hate for each other and war crimes. Divided by a long fence of dried woods, the sign on the boards read, “Death to those who cross the fence.”  The ominous score of flute coupled with the muted colours paints the disturbing opening monologue that ends with a murder. “Past always lives within us,” the narrator ends the long poetic philosophy. It is this idea that the film echoes. 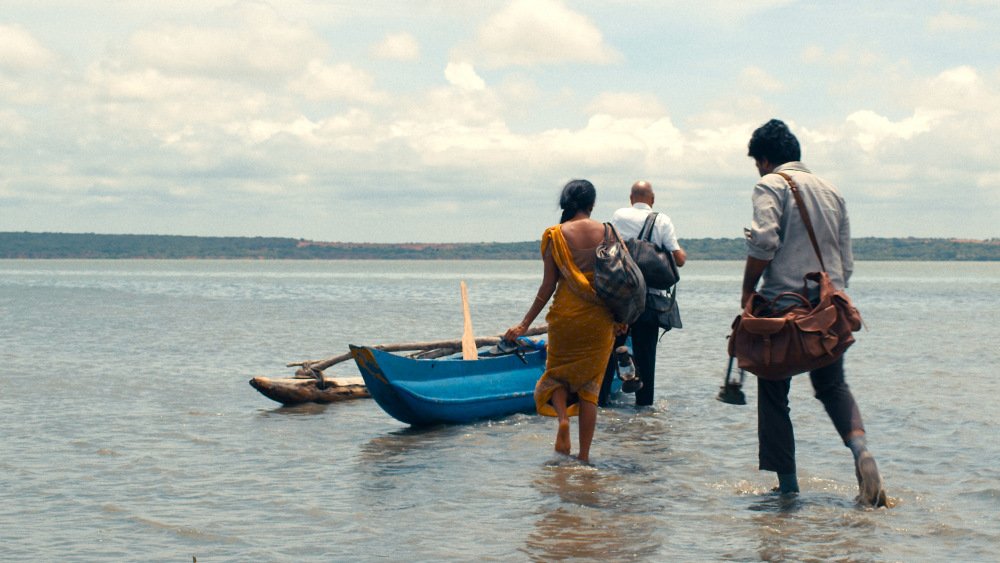 Men across the border nurture on the vengeful ideology that has numbed their heart and undermined their existence. The hate has become part of everyone’s subconscious. It has passed on from one generation to another. When afflicted with the endangering issue of infertility that would wipe out the population of both the villages, the leaders desperately seek for recourses. Within the reality of the film, the only recourse comes in the form of the message from God. A man and a woman should be sent to the obscure and mystical land – “Forest of the Dead” – that holds mysterious power to renew the life. Sharing the similar dystopian set up of Alfonso Cuarón’s much acclaimed “Children of Men,” the first time film-maker Suba Sivakumaran weaves a meditative mood-piece on socio-political issues that prevails in Sri Lanka since ages.

Asoka(Bimal Jayakodi) from the Sinhala, only surviving soldier who ran a coup against his own dictator leader; mute Ahalya(Pradeepa) from Tamil who lost her only child and husband in a war; and an outcast doctor referred as ‘Strange Doctor’ are chosen for the mission. The traces of inspiration from Stalker (Andrei Tarkovsky) is clear, but it ends here.

All three of them leave the village on a boat that takes them to “Forest of the Dead” that has an unpleasant and sinistral vibe. Suba Sivakumaran uses nightmarish dreamy sequences, surrealism, and illusions to blur the line between past & present and confront the characters with their demons. Asoka and Ahalya struggling with their emotional turbulence find themselves in the bizarre face-off that kindles the intimacy which they long avoided.

SORRY TO BOTHER YOU [2018]: ‘MAMI’ REVIEW – AN INVENTIVE AND ORIGINAL SCREWBALL COMEDY

Art director Bimal Dushmantha keeps the production design minimal blending the realistic setting with the mysterious happening in the forest to draw attention to internal conflicts and their consequences on the whole mission of seeding a new life. Director of Photographer Kalinga Deshapriya muted framing composition complements the production design to bring realism and fantasy as close as possible to blur it out.

Suba Sivakumaran exudes confidence and complete control over her craft but the strong political ideas do not seamlessly and organically gel with an emotional displacement that the characters face. Even the performance by both the leads could not capture the nuances in the screenplay that was off-putting at times. In spite of these minor glitches, the experimental narration of the strong connotation of the politics and history in ‘The House of my Fathers’ ensure that the weighty ideas land safely by the end.

‘HOUSE OF MY FATHERS’ WAS SCREENED AT THE 20TH JIO MAMI MUMBAI FILM FESTIVAL WITH STAR.
CLICK HERE FOR OUR COMPLETE MAMI COVERAGE.

House of My Fathers [2018]: ‘MAMI’ Review – An Allegorical Tale on Diverse Events from Sri Lankan History