Hungarian film-maker Ildiko Enyedi’s On Body and Soul (‘Testrol es lelekrol’, 2017) opens with a stark-white image that’s slowly transformed to meditatively silent, snow-covered pastoral landscape. Our attention falls upon a stag and a doe navigating through the cold woods. The tranquility of the forest is shortly pierced by the impact of their hooves on the ground. In what amounts to an achingly gentle gesture, the stag approaches the doe and places its head on the doe’s neck, a miraculous sign of unavowed kinship. These magnificent, blue-tinged frames of the forest is followed by a constricted shot of a cattle herd grouped together inside a dreary pen. After alluding to the empathy projected by the deer, this particular shot aligns our perspective with that of a captive cow, which also exudes a similar form of benignity. The cow looks through the slats of the pen at group of workers who are enjoying their break, and then peers upward at the bright sun. Subsequently, we see this cinematic world’s human characters facing the sun, expressing a kind of metaphysical connection between the animals and humans. This moment of yearning and connection is immediately perturbed by the rendering of day-to-day silent cruelties at a Budapest bovine abattoir. 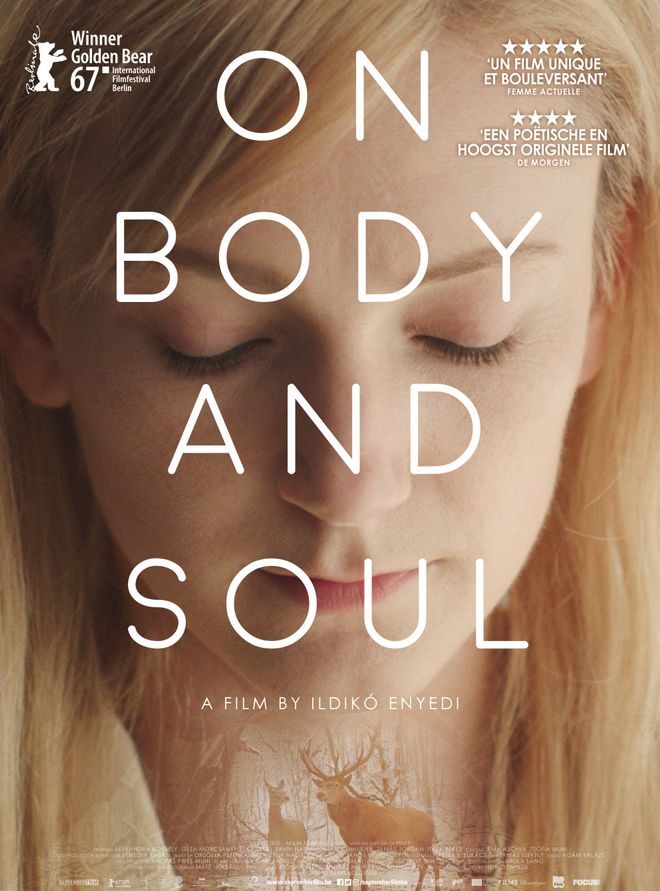 The 62 year old lldiko Enyedi started her career as a concept and media artist. She was a member of The Balazs Bela Studio, a pioneering, independent Eastern Europe film studio that produced films of auteurs such as Istvan Szabo, Bela Tarr, etc. Enyedi’s debut feature My Twentieth Century (1989) won Camera d’Or at the Cannes Film Festival. My 20th Century exhibited the director’s penchant for constructing endearing geometric images and her tendency to focus on absurd, darkly comical human behavior. The film moves with dream logic and revolves around contrasting lives of two separated Budapest twin sisters during the turn of the nineteenth century. Magic or magic realism pervades Enyedi’s later works too — Magic Hunter (1994) & Simon the Magician (1999) — which concocted abstract visual stylization that’s wholly receptive of the miraculous & mythical. After Simon the Magician, Enyedi took a prolonged break from film-making, except for the directorial work in HBO Europe TV series Terapia (2012-14). On Body and Soul, Enyedi’s first feature in 18 years, once again finds the director utilizing flamboyant, precise imagery to eloquently observe the schisms and pitilessness encapsulating the human society.

On Body and Soul could be declared as a study in contrast, the most obvious being the flourishing of tender, tentative feelings between middle-aged Endre (Geza Morcsanyi) and young Maria (Alexandra Borbely), which is set against the vicious atmosphere of a slaughterhouse. Endre is the soft-spoken finance director of the abattoir, who leads a lonely life and afflicted by a paralyzed arm. Maria is the beautiful, unsmiling, newly joined meat quality inspector. Maria, a stickler for rules and disinclined towards small talks, quickly becomes an object of ridicule amongst her chatty co-workers. Her flawless memory, obsessive-compulsive behavior, and aversion to touch suggest she’s somewhere on the autism spectrum. Soon, a mating powder from the abattoir’s medicine cabinet is stolen. Since the police interrogation seems futile (one policeman faints at the abattoir, while the chief expects bribe in the form of steak) a psychologist Klara (Reka Tenki) is brought in to interrogate the employees, including Endre and Maria. In the course of interviews, it’s revealed that Endre and Maria, who have hardly spoken to each other, seems to be sharing the same dream, in which Endre is the stag and Maria is the doe, frolicking around the snowy forest (the sublimely shot opening scene mentioned above).  Klara assumes they are playing a joke on her, but the revelation brings them together, punctuated by few misunderstandings and hesitations. From then on, the narrative dwells on their emotional intimacy through acutely controlled visuals without ever sustaining the drama on jolts of sentimentality. Navigating the vast disparities with the logic of a lucid reverie, director Enyedi suggests an ethereal transcendence between the two emotionally and physically agonized souls.

Configured as a study of contrasts, Enyedi constantly finds parallels between the narrative’s humans and animals, the chief being our tendency to objectify the living beings. In an early scene, a cow is moved from the holding pen to the killing block, the shot lingering on the soulful eyes of the livestock. We may utter a sigh that thankfully we don’t see the killing blow delivered to the cow (the end credits say, “Some animals were harmed during filming, but none of them for the sake of this film”). But what we are subjected to is much disturbing as the cow’s body is unceremoniously flops on the white flood. A worker beheads the dead animal with a large knife, who may repeat this action more than hundred times a day. The meat is hooked onto the assembly line, where it would be appraised for quality; a distinct creature coldly hacked off to be packed as a product. The normalization of the animal’s mechanized killing averts exploitation and discomfitingly channels the implication of this violence upon the viewers. This actualization of latent violence to objectify a living creature finds parallels in the emotional pains lurking underneath the human predilection to objectify one another. Of course, the mortal fear of animal in the chopping block couldn’t be easily equated with the agonies & insecurities of human counterparts. Yet, Enyedi subtly links the contrasts of human/animal to expose Endre and Maria’s captive state within the split society. Similar to the slates confining the cows, in few earlier shots of Maria, we see her face obstructed by paneling or framed within partitions. The introverted woman’s idiosyncrasy immediately attracts derision, her jeerers stripping herself of the tender humanity. At times, everything out of the two central characters’ immediate reach is encompassed in a soft blur. By the time Maria awakens to the prospect of romance, director opts to employ splendid close-up shots, absorbing all the sensory details overflowing through her face. 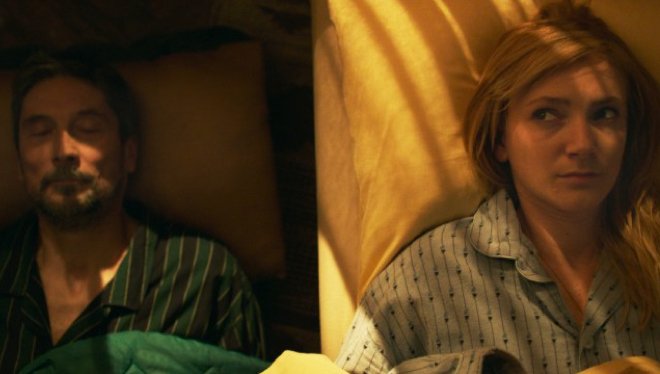 Although On Body and Soul promises to be the tale of two damaged, solitary souls, Maria’s characterization and the visualization of her delicate awakening gains more profundity than Endre’s incarnation of newfound sensitivity. Perhaps, because Enyedi makes the leading lady’s transcendence more moving by incorporating little fine-tuned details of Maria’s habits (she longingly acts out her inner thoughts with the help of a pair of dolls). In the interviews, Enyedi states she share some traits with Maria, especially the character’s stiff attitude towards small talk. While Geza Morcsanyi, a playwright in his first acting role, is terrific as Endre, exhibiting the sort of elementary masculinity found in old-school actors, Maria’s ascension towards emotional well-being resonates a bit more loudly and deeply. Moreover, the experienced theater artist Alexandra Borbely brings perfect degree of meticulousness, doggedness, and sadness to the hemmed-in Maria. These well-rooted and quietly powerful performances also casually unfurl the other contrasts in the narrative: between life and death or freedom & enslavement, etc.

The film might be imagining an unlikely scenario, but considering the sheer randomness or astronomical odds of two people madly falling in love, it doesn’t feel like ridiculous fantasy. Furthermore, for the introspective and outwardly awkward Endre and Maria, beleaguered by fragmented society, the metaphysical or supernatural intrusion brings a great life-affirming tone. Writer/director Enyedi also does pretty well in balancing the movie between abstract, lyrical symbolism and instantly recognizable, naturalistic emotions. Whenever the narrative runs into the danger of succumbing to enshrouded metaphors, Enyedi uses well-judged sequences of black humor. More commendable is the way she juggles between tones, fusing the fantastical, melodramatic, and comedic touches with outstanding flair and assurance. The director does emphasis on gender roles and female suffering, but not in a way that indicts one gender over the other. If the lovers lack passion and absolute chemistry, it was deliberately done. This unusual story simply observes the near impossibility and struggles that brings together this relationship. The end promises exultant transformation, and like the two deers in the dream coming closer through tiny steps, passion may gradually ignite their affinity.

On Body and Soul (116 minutes) is a poignant, sensitive portrait of two loners’ search for human connection, amidst the integrated disparities of the social structure. This uncanny romance story acquires an enthralling feel due to its concrete, minimalist visual style and vividly realized performances.

The Cloverfield Paradox [2018]: At Least It's Free With Your Netflix Subscription